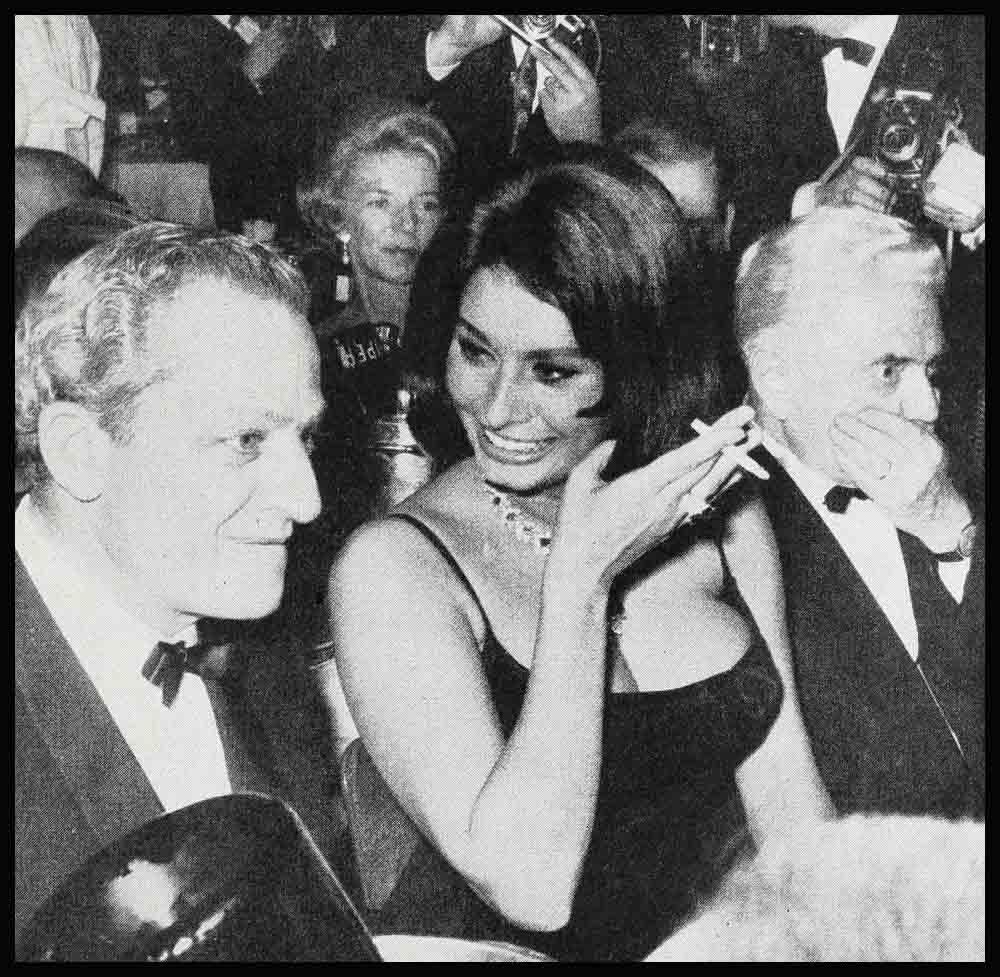 Never did I think the day would come when Frank Sinatra would be acting like a lovesick puppy. His Juliet has him wrapped around her slim little finger. She even has him drinking ice cream sodas and eating popcorn. It must be love—either that or she’s a hypnotist. The 25- year-old actress is tentatively planning on Saturday, June 9th, as the day she’ll become the third Mrs. Frank Sinatra. Naturally, the merger will take place at Clan headquarters—the Sands Hotel in Las Vegas. And it’s shaping up to be a real gasser. Frank is chartering several planes to fly his friends in tor the occasion. He’s even thinking about a private railroad car tor those who refuse to leave the ground—Tony Curtis included.

Incidentally, the day Frank and Juliet announced their engagement, Eddie Goldstone didn’t get a “Dear John” letter. He got the word directly from Juliet, who went to his office to break the news in person. He didn’t answer any calls for days afterwards, but he now claims that she still wants him to manage her career. That’s a far cry from marriage, which is just what Juliet and her young manager were planning for this summer—until Sinatra unexpectedly stepped back into the picture. In any case, I don’t think Eddie will be her manager for long.

If Connie Stevens and Glenn Ford aren’t after pufflicity, they aren’t going out of their way to avoid it. Glenn’s press agent made sure the newspaper photogs were alerted to the time the jet departed Los Angeles for New York and Paris with Connie and Glenn aboard. However, the best laid plans of space grabbers often go astray. The press failed to show because they were chasing a far more important yarn —the engagement of Frank Sinatra and Juliet Prowse. I must admit, though, that Glenn certainly is a romantic soul. He asked Connie for a date to go to dinner and a movie. Then he broke the surprise that the meal would be served 30,000 feet in the air and the movie was a Paris premiere!

To this day, Ernie Kovacs’ many, many friends in the industry can’t believe that he’s gone forever, his life snuffed out by a quick, cruel stroke of fate. And even after death, fate didn’t close the chapter on Ernie. The day of his funeral it was discovered that an error had been made in chipping his name on a marble gravemarker—it read “Ernie Kovac.” The “s” was left off. Frantically, the error was corrected at the cemetery by a stonemason only minutes before the graveside rites. Certainly a strange epitaph to a man known and loved by millions, but perhaps one that Ernie would have chuckled over. He was that kind of a guy.

Scooping around: Keely Smith gave Bob Fuller his ring back. . . . The temp was more frigid than the North Pole when Dorothy Provine and Connie Stevens wound up in the same segment of “Hawaiian Eye” at Warner Bros. Seems the feud is still on. . . . Marriage trouble brewing for Steve Crane (he’s one of Lana Turner’s ex’s) and Helen Demaree. And isn’t the son of a famous show business personality involved? . . . Marlon Brando’s “secret” wife, Movita, left him. She even took their son back to Mexico, claiming Hollywood wasn’t a fit environment to rear a child. . . . What’s this I hear about an English count wanting to marry Kathy Nolan? Only catch is that she would have to move to London and be a countess. . . . I tipped you first that Rhonda Fleming and Lang Jeffries would separate. I tip you now that as soon as the divorce becomes final she’ll marry an eastern millionaire, v/ho’s currently in the process of splitting with his spouse. . . . George Peppard and his Mrs. apparently reconciled. He moved into a new home in Beverly Hills with the family. . . . More trouble ahead for George Jessel. Joan Tyler expected him to marry her following the birth of a daughter she claims was fathered by the veteran toastmaster. Altar-shy George hasn’t, so Joan is planning more legal action and look out, Mr. Jessel!

Vicki Trickett and Dick Herre are expecting their first child in July. Vicki and Dick were the ones who kept their marriage a secret for a year. … I still think Edd Byrnes and Asa Maynor tied the knot while they were in Mexico. They’re not saying, but their friends are. They were supposed to be in Acapulco only five days, but they stayed three weeks.

You think you have problems—Roger Smith has eleven in-laws staying at his home. His food bill runs $110 weekly and he had to buy a bus-type station wagon to cart them all around!

Elvis Presley dropped out of sight after finishing “Kid Galahad.” He was to drive directly back to Memphis with his boys, but weeks passed with no word. Even his mentor Colonel Parker didn’t know his whereabouts. But I did—Elvis stopped over in Las Vegas and discovered pretty chorine Hope Hathaway. He stayed three weeks and it cost him a pretty penny—I hear he dropped another bundle at the tables. Gambling, either for love or money just isn’t Presley’s forte.

Debbie Reynolds turned thumbs down on a studio request to cast her two children in “My Six Loves.” Debbie plays mother to six adopted children in the picture.

Isn’t the reason that Warren Beatty and Natalie Wood haven’t married yet the fact that Robert Wagner won’t give her a divorce? She can’t serve R.J. with any papers, either, because he’s living abroad. She could always get a Mexican decree, but more and more courts are beginning to question the legality of those quickie divorces. And I’m sure Natalie doesn’t want to be a bigamist—who would?

Tony Franciosa and Judy Balaban Kanter finally tied the marital knot at New York’’s plush St. Regis Hotel. Mort Sahl was best man, and—get this—Judy s former sister-in-law, Jackie Balaban, was matron of honor. Tony’s parents mere there, but Judy’s were conspicuously missing. I’m told they were busy soaking up sun in Jamaica. Sounds as if the rumors about them not being too pleased with Judy’s choice for husband number tmo might be true. Pictures 1, 2 and 3: Tony’s new family. (The flower girls are Judy’s children by former marriage to Jay Kanter.) 4: Joanne Woodmard and Paul Newman with Mort Sahl. 5: William Vanden Heuvel, Rita Gam and husband Tom Guinzburg from whom she separated a fem days after picture mas taken. After the reception, the newlyweds left to honeymoon in Philadelphia where Tony mas busily working on a new play.