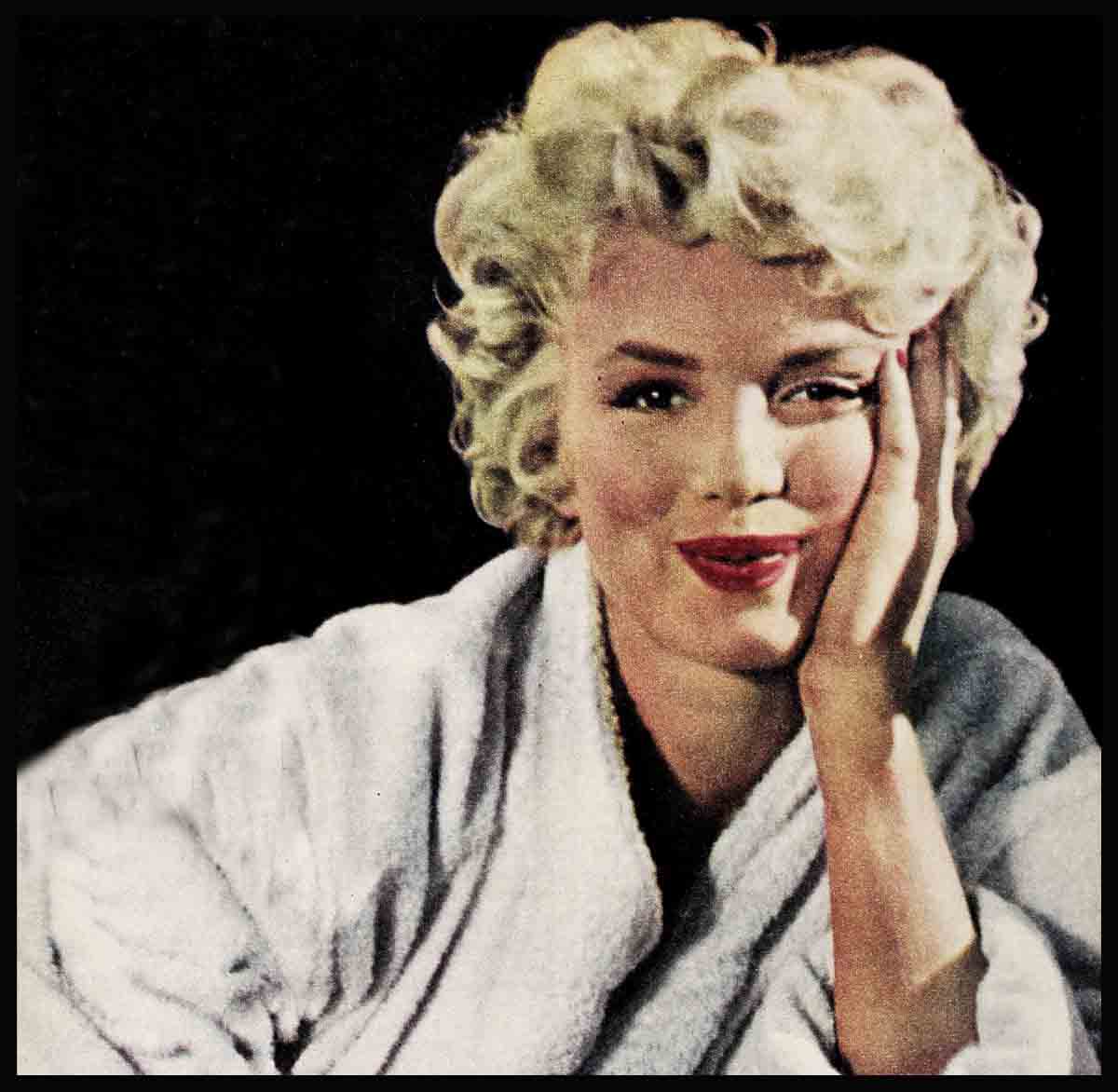 Nanette Kutner is a writer who has known the circumstances surrounding Joe DiMaggio’s first marriage. PHOTOPLAY publishes her open letter to Marilyn Monroe as one person’s interesting viewpoint on what happened to the other woman who also thought she was the right person to be his wife.

AN OPEN LETTER TO MARILYN MONROE:

You are coming out of the anesthesia of shock, Marilyn. Like every newly separated or divorced wife you have been on an emotional binge. The Christmas holidays are around the corner; they may well make matters worse. Remembering other holidays when you had a man for whom you could buy presents, you look around at a home echoing emptiness.

You have already discovered that if you don’t make a date ahead of time you will be stuck, just when you feel like going places. Sure, there are nights when you are exhausted and want to stay put, but those other nights when you’re pepped up and alone—they’re not so good. Due to the exigencies of studio work you never can tell how you may feel; it is frustrating to sit at home when you need the shot-in-the-arm of going out, or to go, out when you are aching to sit home. Not having to make a date ahead is part of the fun of having a husband. I doubt if you experienced much of that fun. From what I hear, Joe took you out little, if at all.

Ever since you were bandied from foster home to foster home you have taken the knocks by yourself. It is sharing the nice events that you probably missed the most, the talking them over with Joe, although the conversation may have been kind of one-sided.

Let us face it. There is no substitute for being loved. You have discovered absorbing work is not sufficient. In your desperation you are apt to forget the dozens of unpleasantries which brought on the split. As you are an honest soul, I am fairly certain you have begun to wonder where you failed, how much was actually your fault, perhaps this, perhaps that. You go over it again and again: maybe if you hadn’t had the career, maybe if there had been a baby coming, maybe. . . .

Well, Marilyn, it was not your fault and it had nothing to do with your career. I think the separation would have occurred anyway. You see, I saw how your Joe acted during his previous marriage to Dorothy Arnold. I am an observing reporter, Marilyn. Of course a person can change, but only a great one. Joe was a superb ball-player. Still, is he a great person? I doubt if he will change. It is impossible for me to believe you or any other bright, alive, cooperative, well-meaning woman—career bent or no—could have liked a marriage, like the one Dorothy had, for long.

But, knowing your own heart, you will be guided by what happened to Joe’s marriage before. You will be wiser.

Marilyn, it was several years ago when I was assigned by a top national magazine to write a piece about Dorothy DiMaggio, her husband Joe and their baby.

Joe, Dorothy and the baby were living in a furnished sublet penthouse in New York City. The living room was a dignified oak paneled room, with book-lined shelves. “Some days I take those books down, every one,” said Dorothy DiMaggio. “They’re hard to dust. But it helps pass the time.”

Marilyn, Dorothy DiMaggio was—and is—a glamorous blonde. And at the time of her marriage to Joe she gave up her movie career for him. And she had a baby. She did all the things you didn’t do.

She showed me her mink coat. “Joe gave it to me. I don’t get a chance to wear it much. When he’s not too tired we go to a movie. He likes action pictures; I like love. We go to action.

“When we don’t go to the movies we stay home and play gin rummy.”

She tried to explain Joe. “Men are screwy when it comes to their worship of ballplayers. They set ballplayers apart. Joe’s been playing professional baseball since he was very young. No one ever says No to him.

“I go to the game every day. When I don’t go Joe likes me to listen.” She tuned in the radio (this was before TV). “I’m always afraid he’ll get hurt,” she confessed.

Little Joe was about ten months old then. “Joe wants him to grow up to be a ball-player. So the whole time I was pregnant I never missed a game.”

There was a wife, Marilyn. And don’t you forget it. She did all the things you may be kicking yourself for not doing and look what happened to her. Before my story about their marriage could be published, Dorothy telephoned me. It was a nice gesture. For she did not want me to be embarrassed by its publication. “You’d better kill the story,” she told me, “because I’m leaving. I’m taking the baby. To Nevada. Yes, I know what I’m doing. I can’t rot away.”

The mystery to people is why you didn’t know. You went with Joe for two years. Console yourself, Marilyn. Many couples whose marriages flopped have gone together for long pre-marital periods. During the courting, somehow, both parties let smoke get in their eyes. They kid themselves. They think matrimony will erase faults. It doesn’t. Matrimony is nothing more, nothing less, than two people with plenty of faults learning to live together harmoniously. For happiness, both have got to give.

Sometimes, Marilyn, it seems difficult to give—as you and Joe discovered. But, then, sometimes with separation, with loneliness, the giving seems almost insignificant. Both you and Joe have learned this, too. The lonely evenings you spent alone in your studio dressing room because again, you had no place that was home. The pleasant warmth of sharing young Joe’s birthday dinner with him and his dad, big Joe—even though you were separated. You gave a little then. And Joe has given, too. When he drove you to the hospital and paced the floor until he heard your operation was a success. Understanding and sharing form the foundation of marriage, Marilyn. Often it takes real unhappiness to know them. But sometimes, from heartbreak comes a more lasting, more complete happiness.

You had a nasty jolt, Marilyn. There is no use rehashing, blaming yourself. I know you feel badly, but how else do you expect to feel? Grieving is no disgrace. But know that you are not alone in your grief. There are some who understand.

It is a quote. PHOTOPLAY MAGAZINE JANUARY 1955