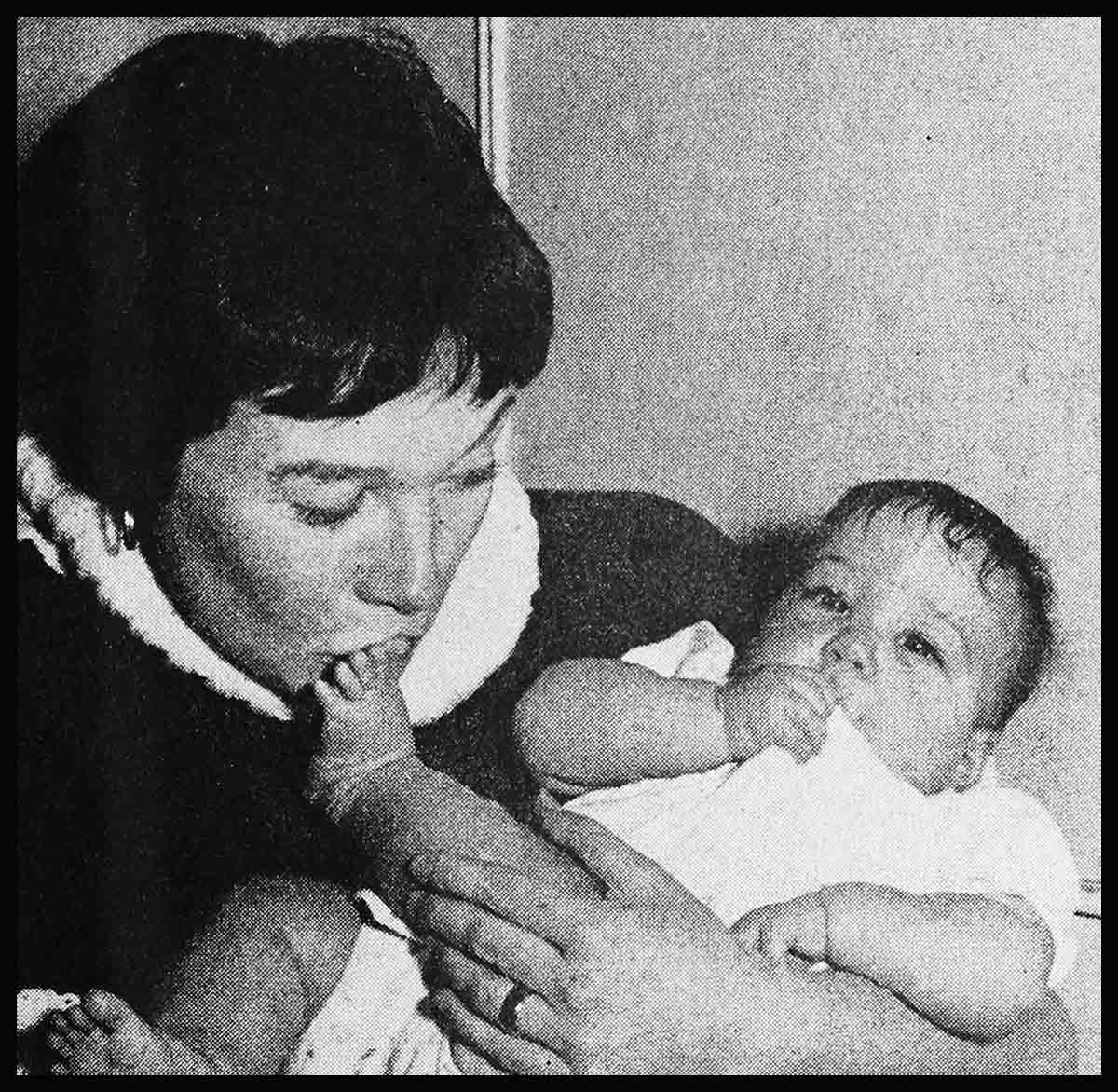 Did you and Steve plan to have Stephanie?

Sure, about a year later. It was two months before I found out I was pregnant. I had a mad craving for angel-food cake and giant Hershey bars with almonds. (They had to be giant. The little ones didn’t taste the same.) After two months of gorging on this peculiar diet, I said to myself, “Girl, sompin’s going on here.” Since we had no calendar in the house. there was no organized way to figure it out. | thought, “Maybe I’m dying,” when I began being sick every morning. Then I told me, “It’s probably the New Year’s food I ate in Japan.” You know, little delicacies like canned grasshoppers. We’d just returned after filming “Around the World in 80 Days.” I had been rocking and rolling on a fishing junk, and for days I spent most of my time leaning over the rail. Then—I got a mad craving for apple pie. (There are no giant Hershey bars with almonds in Japan.) The waitress finally got my message, and served up a beautiful wedge of apple pie almost hidden by a magnificent pile of whipped cream—I thought. When I took my first bite, I sat stunned for | as long as it took my stomach to send a message to my brain. Then I headed for the bathroom. My gorgeous apple pie was topped with mayonnaise!Having seen a picture in an American magazine, my waitress figured that’s what the white topping was. It was after that experience I realized Stephie was on the way.

Do you believe in being active while pregnant?

Yes, in every sense of the word. Most women have morning sickness, mine lasted all day long! Other than that, I didn’t stop running around. When I was six months along, Steve and I packed into the High Sierras with sleeping bags and the whole bit. We climbed mountains together until Steve got tired. Then I went on climbing by myself. I think it piqued him a little, but sleeping out in the open in the snow was wonderful. He finally forgave me, though.

Is it true that you drove your car—a racy MG—all the time you were pregnant?

Sure. The steering wheel was so low I didn’t have any problem—except not seeing the speedometer. I got a lot of traffic tickets. I would explain this to the cop by saying, “Officer, I’m sorry, but in my condition I couldn’t see the speedometer.” Then he’d say, “What condition?” And being shy as I am, I’d drop my eyes coyly and refuse to answer. I always got the ticket. One night I was tired and nervous, and when the cop pulled me over and looked at my driver’s license, he asked, “Do you work, Mrs. Parker?” I started to blubber, and between my self-pitying little sobs, I quavered, “Yes—I’m an actress and I work at Paramount . . .” I think the fine went up twenty-five bucks immediately. But I like to drive. I even drove myself to the hospital the day Stephie was born. Steve was livid, but, being an expectant father and a very nervous husband, he let me have my way.

Did you read baby books before Stephanie was born?

No. Unless you drop your baby on her head or smash her nose, I think a mother’s instinct is good enough. If the instinct is accurate, you’ll never need a book on “How To.”

Do you think women today make too much of having a baby?

Yes, because they’ve had a lot of help in the thinking. Doctors, pediatricians and publishers are making birth a big thing. You’d think babies had just been discovered. Of course, there are exceptions in complicated birth, but for the average woman, pregnancy is a state of mind. And babies are fun.

When did you first realize she had a personality?

The day my cat, Bolo, pulled the bassinet off the night table. Bolo’s a pretty strong personality himself. He thinks he’s a dog. Honestly. He growls and pants and chases dogs down the beach and into the ocean. Well, that day Bolo took a flying leap and got his claws into the edge of the bassinet. He hung on for dear life and finally bassinet, Bolo and baby landed on the floor. Bolo and Stephie were caught together underneath the bassinet. They were in there screaming and biting at each other. When we got them out, Bolo tore out the front door and disappeared . . . for good. He hasn’t been back since. That’s when it dawned on me that Stephie had a pretty strong personality if she could best Bolo.

How do you feel about raising your baby?

Strongly. my mind) that raising a child is simple. Nothing as complex as doctors, magazine articles and people in general try to make it. Babies and young people are pure emotion. They can’t control themselves. So I have to have control. However, I plan to be myself. Sometimes I’m inward and moody; sometimes I’m happy and bubbling. I have no intention of controlling myself so that I’m always the same standard-type adult to Stephie. If I tried to hide how I felt, she’d sense it. I’m not pulling any punches with her, because nobody else will when she grows up. and be a person. I want to let her grow up and not envelop her in a parental cocoon that will leave her helpless and indecisive. I believe in TLC (tender loving care) to the nth degree, and as much possible freedom in individual choice that’s safe for her. Even now, as a baby, those choices are available. She is also as myopic as her mother. When she learned to crawl, she was constantly banging her head into a chair leg or lamp base. No one would run up with sympathetic cluckings. She simply stopped, rubbed her sore noggin, then amiably set out to bash it on something else. When she is content to sit quietly and play alone, that very aloneness is important to her. She must some day learn to enjoy herself without company.