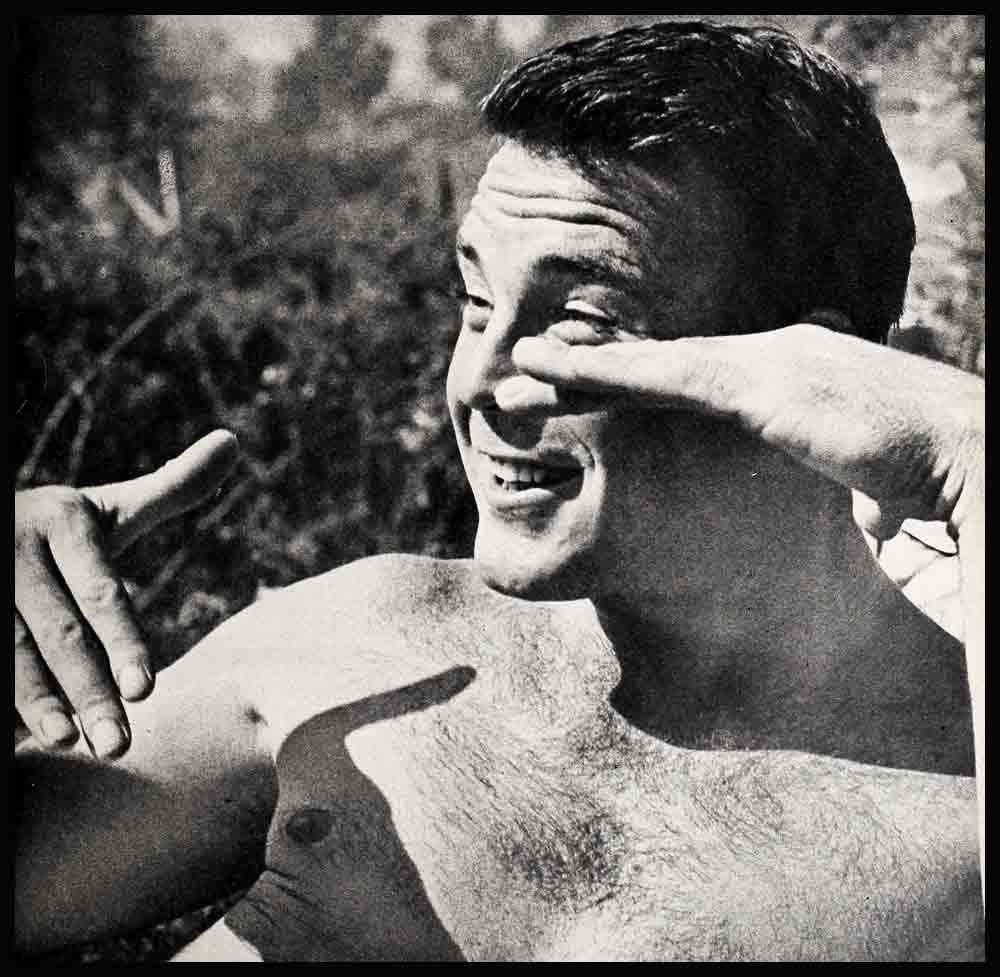 “Who?” asked the bewildered Scott.

“The girl you marry,” she replied. “You’re still looking for her, aren’t you? Or are you? Tell me about her.”

Scott has never been known to actually panic at a direct or indirect approach to the subject of marriage. However, when a lady has that certain gleam in her eye and it’s beamed in his direction, mentally he heads for the hills. Alone. “I’m not getting married,” he assured her. “I don’t want to get married.”

“No,” he issued another denial, still managing to keep a straight face. “What in the world would I do with a wife around the house? What would she do?”

The lady laughed merrily. “Well,” she said. “She could cook and keep house and send out the laundry. . . .”

“I can cook and keep house,” Scott informed her. “And there’s a man who comes once a week to pick up the laundry. . . .”

“She could pay the bills.”

“I have a business manager. All the bills go to him,” said Scott.

“What about a family?” she asked, smiling through teeth now clenched. “Don’t you like children?”

“Now, Scott,” she prodded. “You know you’d like to have a family of your own.”

“On second thought, maybe I would,” said Scott. “About thirteen, I’d say. I’m not superstitious. Might be a good idea to have a whole crew around—get some work done. Keep ’em busy. You know, running errands, hustling firewood. Save hiring help.”

After this speech, the little lady developed a sudden headache. She remembered she was expecting an important call at home. And furthermore, her mother was there alone and it was getting late. Scott never saw her again. As he left her at the door, he concluded that she must have taken him seriously—and he didn’t correct the impression. One thing was certain. He’d taken her seriously—and resorted to his sense of humor as a first line of defense.

That’s Brady. If you were his girl, you’d have to understand him. He’s never vowed that he won’t marry—eventually. As for the girl—whoever she is, wherever she is, whenever she comes along—well, he’ll be waiting. And, if the feeling is mutual, he figures they’ll both know. She won’t have to call the matter to his attention. “Right now I simply don’t want to get married,” he says. “Why not? Well now, when does someone want to marry? One guess is as good as another. But ask why I’m not in love and Ill ask you to give me the Einstein theory of relativity.

“The same thing goes for asking somebody why he is in love. How does he know? It’s an intangible, unexplainable thing.

“There are those who say that love is a fifty-fifty deal. Maybe I’m still an old-fashioned romanticist, but I’d call it more of a hundred-hundred deal. How can you love fifty percent? Like the song says, it’s all or nothing. I’ve never had the feeling. Consequently, at the moment, I’m a confirmed bachelor.

“But the questions keep coming. I remember someone once asked how it would be if someone were in love with me. How do I know? As I’ve said, I’ve never been in love. The only thing I can do is to think about the things I’d like to do and the way I like to live. The person I’m in love wi will either like these things or Ill stop liking these things.”

If you were Scott Brady’s girl, you’d know that the “home with a good book” story is a true one. Scott isn’t a man for night clubs. In his scheme of living, he considers going out a great waste of time. “What are you going to learn at a night club?” he asks. “What world-shaking events occur in these places?”

Your dates would be quiet ones. Perhaps dinner at Scott’s home—or some remote spot with a pleasant atmosphere and good food. “The way I see it,” he says, “it doesn’t matter where you are. It’s who you’re dining with.” He’d hope his girl would like plain American cooking. And after dinner a movie or a play—if there’s one in town—or possibly the fights.

Sometimes you’d visit friends, and probably wind up on the floor shooting marbles with their kids with Scott having more fun than anybody. When he vows he’d like enough of his own for a basketball team, he’s not so certain he’s kidding.

Parlez-vous Francais? Scott’s learning. Two nights a week you might join him at UCLA night school where he recently signed for a couple of courses. And you’d like as not spend a great deal of time poring over travel folders. Scott has a great yen to travel. When he made a picture in London, he had to come right back to the States for another film. However, some day he plans to take the grand tour—France, Italy, Switzerland—all the places he’s wanted to visit over there. “I’d like to meet the people of our world—and possibly expose myself to a little old-world culture,” he says.

You’d find that Scott reads the books on his book shelves—best sellers like “The Caine Mutiny” and “Not as a Stranger”. . .

You’d discover that he can’t bring him- self to loaf between pictures, that he likes to spend his time as constructively as possible. He believes an actor can only bring to the set with him the things that he learns when he isn’t working. To Scott, the real work is not making a picture. It’s preparing himself before the picture begins. “It’s an old argument,” he says. “Does the actor make the part or does the part make the actor? I say it’s fifty-fifty. If the part isn’t there, you can’t play it. But then again, if it is, you’ve got to be able to do it. You can only portray what you know. Watch the successful ones work.”

When he’s working, you’d probably come to know as much about the role as he does. Scott reads the script and tries to imagine what kind of family the character is from. He wants to know the background, what’s behind the character. Then he dreams up a story and tries to discover how he would react in such a situation. “Then, I have an idea of how he does things because I know why he does them,” he says.

He doesn’t go off into a trance. He believes that living a part is foolish. However, the best way to understand the character is to talk the fellow over with someone who’s interested, get someone else’s point of view. If you were Scott’s girl, that’s where you’d come in.

But it wouldn’t all be work and study. There’d be days at the beach when you’d take along a picnic lunch and eat fried chicken salted with sand and love it. You might note that occasionally he’d glance your way, thinking you weren’t watching, to see if you were really having fun. He’d hate to see you moody and mysterious. He’d want to see you smiling, enjoying life—at the beach—anywhere.

You wouldn’t gush and you wouldn’t gossip. If you did, you might hear Scott snap, “Don’t tell me. I don’t want to hear about it.” And that’s another thing—honesty. He’d always be honest with you and he’d expect the same. However, you’d both know the difference between constructive honesty and destructive honesty.

You’d see a lot of his family. You might drop by for dinner some evenings, or after dinner And invariably you’d settle down to a Canasta bout. Scott’s mother is a Canasta fiend. And she always wins. She also has definite ideas about marriage. “You ought to get married,” she’ll tell Scott. “Why don’t you?”

“Because I don’t think it’s the thing to do right now,” he tells her.

If you were Scott’s girl, chances are, she’d ask you too. And he would leave your reply to your own discretion.

It is a quote. PHOTOPLAY MAGAZINE JULY 1954