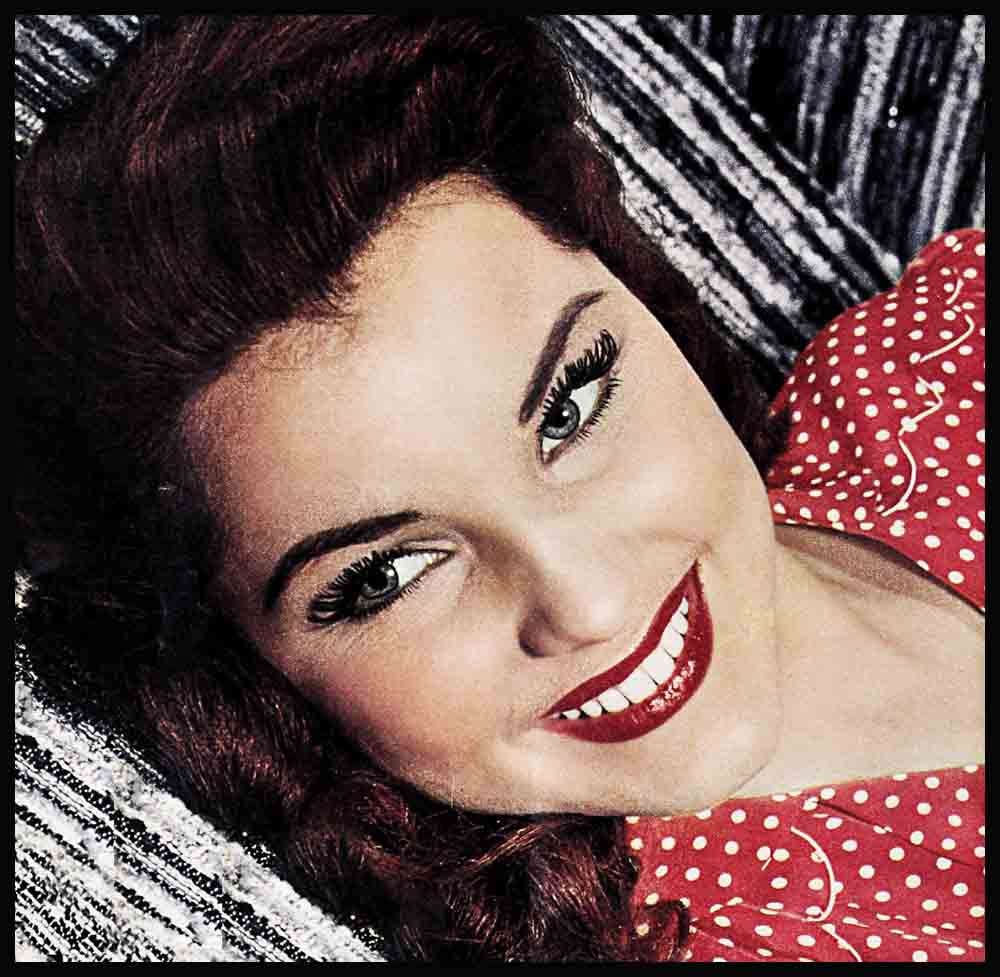 Magic In Your Eyes

Do you know that at night, when she’s all done up in a lovely, floating formal, Piper Laurie wears gold on her eyelids?

Do you know that Joan Crawford, when she wants to be particularly startling, and especially when she’s wearing a plain black velvet dinner dress, wears rhinestones on her eyebrows? And do you know why, with or without rhinestones, she wears her eyebrows so thick?

Did you ever stop to think what it might do to emphasize the color of your eyes, if you blended your eye shadow using a combination of green, blue and silver? This is one of Debra Paget’s favorite make-up tricks.

Do you know why, though Marilyn Monroe is the first to admit that she bleaches her hair, she keeps her eyebrows a dark brown? Or why Debbie Reynolds sees to it that the space between her eyebrows exactly matches the length of one eye? Or why Joan Evans never goes to sleep at night before she has put oil on her long lashes?

The reasons are simple: to make the most of their eyes. And every one of these little tricks can help you make your eyes the most beautiful in any gathering. Whether your eyes are naturally too small, too colorless, or too dull, they can be adorned to look like the most exquisite in the world.

It’s all a matter of the right eyebrow pencils, correctly used, the right eye shadows, ditto, mascara, ditto, a color sense and imagination.

Ask any make-up man in Hollywood and he’ll tell you that the eyes chalk up forty per cent of the beauty of your face, with the mouth registering thirty per cent and the nose another thirty. Though there’s not a lot you can do about the mouth and much, much less about the nose, there’s almost no limit to how striking you can make your eyes.

Hollywood is so all gone on this subject that in Beverly Hills there is actually a shop devoted entirely to eye make-up. It’s run by eye expert Aida Grey, who “custom tailors” for the glamour girls—shadows concocted of two, three or even more tones; mascaras ranging from black through deepest brown to blue, green, gray or gold; brushes of the proper textures; pencils of the proper shades. It was Miss Grey who originally persuaded the girls to put their eye shadow on, not horizontally, but diagonally, up from the inside corner of the eye to just under the brow. Try it yourself, sometime. You’ll be delighted with the exciting new effect.

As Debra Paget says, “Most girls don’t experiment with their make-up, particularly with their eye make-up, nearly enough. And they don’t know what fun they’re missing. If a girl will really study her looks and try a dozen or twenty different make-ups till she gets the right one, she’ll know a real thrill.”

To see how well Debra practices what she preaches, take a look at our color photograph. Her eyebrows didn’t naturally grow so wing-like and distinctive. Her eyes did not always have that alluring upward swing. She started “training” both her brows and her lashes when she was only ten years old. Not many girls begin thinking about how they look that young, but Debra did, because she had known ever since she was six years old that she meant to be an actress. She boned up on make-up just exactly as she did on singing, dancing and diction.

And it certainly paid off! The eyes had it when it came to her first big career break, the role of the almost-mute little Indian girl in “Broken Arrow.” The part demanded a girl who could do most of her talking through her eyes. And Debra’s luminous, distinctive eyes seemed to be made to order. Of course, as you know, she had to wear brown contact lenses for this particular role, since there is no such thing as a hazel-eyed Indian—and Debra is hazel-eyed. But it was what she does with them that turned the trick.

When, as a child, Debra observed that her eyebrows were too close to her eyes, she set herself a rigid schedule. Three times every day she brushed the brows up, up, into the line she wanted them to follow. She touched them with vaseline to hold them in place by day. At night, she shaped them with lanolin.

At times, during the training period, Debra’s eyebrows got a little shaggy, and then she learned the art of tweezing—just a hair here, another there. And now you see the glorious result.

As for her eyes seeming to slant upward, that’s skill and artistry—a matter of good eye-pencil drawing. If you doubt this, look closely at Debra when she appears in “Prince Valiant” as Janet Leigh’s sister. Because Janet’s eyes are round, Debra’s were made up round, too, the corners deemphasized, rather than elongated. It’s fantastic how much this makes her look like Janet. But right now, she’s playing a “Princess of the Nile” (in the movie by that name) and she boned up on Egyptian art before she started to experiment with her make-up. Result is, her eyes are perfect Egyptian—tilted, long, exotically alluring.

The method Debra used to raise her brows years ago is one which every Hollywood star knows, and one with which you can easily do some eyebrow-raising of your own. The means by which Debbie Reynolds separated the space between her brows is even easier. Just tweezers.

The space between your brows should be alabaster-smooth, and about the length of one eye. If that space is too great, you’ll look startled; if it’s too small, you’ll seem to squint. The proper proportion is easy to achieve. Just pluck a few hairs out, or draw a few in, as the case may demand.

The actual drawing of the eyebrow line does take practice, and a sharp point on the pencil. But to begin with, are you sure you’re using the right color?

Eyebrow pencils cost very little, and pay you dividends a thousand times over. So why not experiment a bit with shades? And with ways of applying your pencil? Have a look at the lines the stars wear, and then adapt them to your own facial structure—and to your age. You’ll find a fairly heavy brow is effective if you are mature. That’s the reason for Joan Crawford’s. There’s a beauty who knows every trick in the book, and you know how ravishing she always looks, with those strong brows of hers dominating that gallant face. When she dips a few rhinestones into liquid adhesive and dots them along those brows, the result is wildly glamorous.

If you have red hair, either real or acquired at the beauty parlor, don’t, don’t bleach your brows to the same shade. Your brows are intended to draw attention down to the eyes, not up toward the hair. How much of her naturally exquisite beauty Arlene Dahl loses by matching her brows to her hair, there’s no telling; but smart Missy Monroe wears quite dark brows to let you concentrate on those glistening orbs of hers.

Once you’ve mastered the ideal eyebrow shape, then you “shape” your eyes, and “color” them by the way you shadow your lids and mascara your lashes.

You’ve probably tried black and brown mascara–but have you ever experimented with blue, and gold, and blue-grey and green, or a combination of all of them? And have you thought about conditioning your lashes by daily care, so that they’re supple and can take effective advantage ot your mascara tricks? Joan Evans uses oil on her lashes at night to keep the ends of them soft and gleaming. She puts a little of the oil on the skin around her eyes, too, to soften it and, by day or candlelight, to give it alluring glisten.

Piper Laurie worked out her gold evening eye shadow by mixing various eye-shadow pastes—and with her carrot-top it is tremendously effective. Make up a color for yourself. Naturally you can’t wear a very startling color during the day, but at night you may go as far as you like, or as your date likes. But heed this fundamental Hollywood rule: Eye shadow should seem to begin nowhere and end nowhere. It should simply fade off. The trick is a matter of subtle blending. Practice will soon show you the most effective method.

To “color” your eyes, you work both with eye shadow and mascara. Our mothers used to feel wildly “fashionable” when they matched a blue dress to blue eyes, or a brown velvet to brown ones. But Hollywood girls are more subtly color-conscious than that, as you can be. Subtle green eye shadow, subtle green mascara can make brown eyes startling. Lavendar shadows above blue eyes will give you that striking Liz Taylor effect. But any lines you draw around your eyes, even below them, should always end by going up. Lines going down are aging.

You will have put on all your other make-up before you do your eyes, because you don’t want any powder over eye make-up—except possibly over your brows. If you powder your eyebrow line lightly after drawing it, (and then brush the excess powder off) it will stick, just as your lipstick does when you powder over that. But put your mascara on at the very last moment, when your eye shadow is all exquisitely blended, your nose all powdered, your lipstick flawless. And to be sure that your eyes look mysterious if it’s night, or clear and sparkling if it’s day, examine your make-up by a light as nearly like that which you are to be under later as you can possibly manage.

The true art of make-up, as Hollywood practices it, is to look as casual and as natural as possible by day, as bewitchingly glamorous as you can by night. And in no part of make-up does this hold true as much as in eye make-up.

Besides, to make a beauty of yourself is more fun than anything. Except romance, of course. And that, as night follows day, comes next.