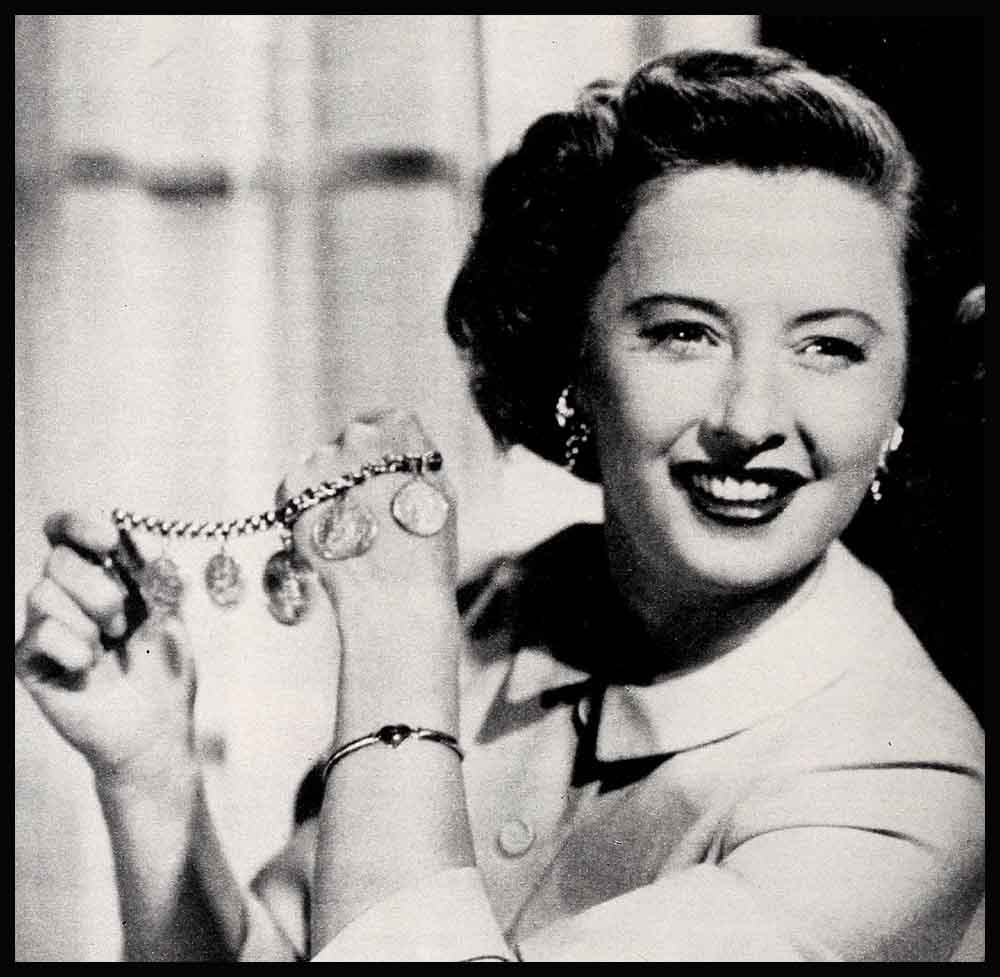 I was born on July 16, 1907, and I’m now in my forties. The forties, I think, give a woman a wonderful, challenging decade. I’ve never understood why women want to be forever “young.” In my book it’s far better, and easier, to take advantage of each day as it comes, to live it to its fullest extent for what it is.

My indifference to having my birth year printed has confounded some people, who assume that Hollywood has a particular fetish about letting an actress admit her age. It’s true that in studio biographies, the date of a star’s birth is nearly always carefully omitted. Each time one of these Stanwyck documents is typed I call the boys in the publicity department and just as carefully explain that I don’t in the least mind having my age printed.

I find myself feeling genuinely sorry for women who refuse to admit their age—those who try to hold desperately to their twenties or thirties. I know one actress who was twenty-nine for so long I thought she’d never reach thirty. I aged five years while she was twenty-nine. There’s no point in trying to hold on to your twenties or to any other age for that matter. Frankly, I’d hate to have to go through any period in my life again. Not that I didn’t enjoy my teens, my twenties or my thirties. I’ve had some fun at every age in my life. But I think that when you get to your forties, your nice, honestly admitted forties, you really appreciate life.

When you’re young and giddy, you’re grasping at so much, so afraid you’ll miss something, so intense about your future, your ambition, your determination, that you can’t honestly say you’re enjoying yourself. When I was in my twenties, I was so intent on enjoying myself that I felt quite deprived when I “had” to make a picture, since it would mean I couldn’t go out. Now, I look back at the girl I was and I wonder how she could have been so silly. Work is so much more fun than just “having fun.”

One of the most important aids for the woman who wants to be really young, and stay young enough to make a liar out of the calendar, is to keep busy. A busy woman hasn’t time to wrap up her happiness, her whole life, in what she sees when she looks in a mirror. If you keep searching in the mirror for proof that you look younger than you are, you’re a cinch to find some evidence of tension that will set you to worrying.

I get a big thrill out of my work, and I make a good many pictures. In fact, I’m black-mood miserable when I’m not working. During the last war several people in town were confounded because I was working more than I ever had before. I made four pictures in one year. Some “best friends” told me I was making a great mistake—that I’d have all four films released at once, in some spots play competition to myself and build up a nice case of box-office poison as a result. Well, they were right—I did have three pictures playing on Broadway simultaneously. Now, three Stanwycks in such heavy doses can be pretty sickening, let’s face it. But the prophets were wrong about the result. It’s funny, but I made the first ten in box-office standing that year—the first time I’d crashed that list in my long career.

My work has made every day a challenge. It’s kept me so “on the go” that I have had no time to consider a calendar as anything but a guide which tells what day it is and when to write my thank-you notes.

And I don’t give much thought to beauty-aids. I’ve never worn any makeup except lipstick. As for mascara, I don’t bother with it, because it’s always smudging around my eyes. Now I admit I’d like to have a facial or a massage one day because I hear they’re good for you, but I just haven’t found time to get around to getting a treatment. I haven’t tried to make the time, either. I guess I dismiss many of these things as vanities because women who are too preoccupied with their makeup bore me as much as they bore men. So I swing the other way, feeling that vanity is practically a sin. It can be, you know. I’ve seen women actually sinning against themselves in that department. all their concentration and concern about their looks, their incapacity, by whatever devices, to avoid the marks of time on their faces, have made them neither girls nor women. They flitter and flutter, bedazzled by their attempts, but bedazzling no one else with their results.

And take this business of hair. I’ve seen a lot of women go through a period in which they’re perpetually dyeing their hair. They are blondes one month and brunettes or redheads the next. Where’s the reason behind this? In most cases I’ve seen, the dyed hair has only confirmed the age of the person and added harshness to her face. People are continually surprised that I haven’t dyed my hair—which is now filled with gray. I haven’t touched it because, frankly, I like it this way. Just call me “silver-tip Stanwyck” and I love it. And I consider my hair today an improvement over the rather mousy sort of red hair I was pretty tired of. It looks far better on the screen, too. My hair used to photograph like dead corn.

No matter how extrovert I am about liking my gray hair, there are still those who can’t believe that I don’t want it hidden. Not so long ago I did an art layout for a magazine—in color. When the editors saw the pictures they ordered the retouching of my hair to hide the gray. When they had finished the job some $300 later, they gleefully wrote me that I wasn’t to worry about the gray showing—they had fixed me up just dandy. I hated to throttle their happiness but I had to tell them I was disappointed because I liked the gray hairs to show.

HEAVEN deliver the woman in her forties from wearing outfits with frills and rosebuds meant for teenagers. They always make a woman look ridiculous instead of as young as she wishes she were. There’s nothing which gives greater emphasis to age than clothes that are obviously on the wrong body in the wrong year. Simple clothes with straight lines are a woman’s best friend. Suits, skirts, blouses and sweaters can come in infinite variety. For me, just make them simple. Even my evening gowns are simple. Oh, I’ve seen some fancy get-ups I’ve been tempted to buy, but they’re usually so complicated in construction, so much trouble to get into that I decided against them.

When I’m on a picture I have no worry about clothes. If it’s a dress epic, of course I’m interested, but I leave any problems to fine designers like Irene, Edith Head and Orry Kelly. Clothes simply do not give me any great concern. My tastes and requirements are specific and I don’t fuss about them. Not even when I’m going to a formal gathering.

Once I was invited to a large formal party given by Mary and Jack Benny. I’d anticipated it with some enthusiasm. Then—just a few days before the party I got an attack of pleurisy and was sent to bed by Dr. Joel Pressman, Claudette Colbert’s husband, who attended me. He said I couldn’t go to the dinner unless my temperature stayed down for the twenty-four hours preceding. Well, it did, and he gave me his okay providing I stayed abed until he came for a final check-up before the party.

I expected him around five or six, but he was delayed at the hospital and arrived at seven-thirty. After checking me, he asked, “What time is the party?”

“Well, it’s now twenty minutes to eight. Do you mean you can get up and dress and be there by eight-fifteen?”

“Look, Doctor,” I said, “if I started dressing at five and spent three hours getting all fussed up, I wouldn’t look any better. I’d probably find so much that was wrong with me that I’d just wind up in a great state of irritation. Why bother?”

I arrived calmly at the party—on time. Maybe I’m just too lazy to become one of those women who spend so much time on themselves. And who end up worrying themselves sick. The more they fuss, the fussier they get and the less pleased they are with the results. They get into an emotional and mental stew and destroy every possibility of having fun at a party.

When you’re twenty it’s intelligent to keep yourself under control; when you’re thirty it’s wise to learn to be serene about annoying details; when you’re forty it’s dynamite unless you do both. Maintaining composure is one sure way to stay young. Our years will be warm and friendly if we women will just stop hating them. Hate lines etch deeply.

Because I don’t worry about age, I’ve never tried to play roles that were obviously too young for me. Actually, it’s been the other way around—I haven’t played any real ingenues in my entire career.

I never had much patience with those actresses of the past who used to try to hold on to ingenue roles until they practically had to use a cane to get around. They didn’t fool anyone. Thank goodness, that type is now practically extinct.

No woman who tries to fight back time is honest With herself. She only confuses herself on important issues. An ostrich with its head in the sand hasn’t got a very good perspective on much of anything either.

Dreading the onslaught of age is like carrying a disease within you. It’s like having some horrible weight on your conscience. And, too, it narrows horizons. It produces a failure to develop a real personality—which is a female’s really attractive asset. It creates a blindness toward the good that can be done for others. It makes for a numbness toward the things in life that make each day exciting and a challenge. The yesterdays that are piling up get so burdensome that today’s potentialities aren’t recognized. And as for the tomorrows—they’re a horror!

Speaking of yesterdays, I pity the women who, by not admitting their age, have deprived themselves of any chance to enjoy reminiscences. They have to deny themselves the luxury of talking about any memories of their past, no matter how wonderful, that would date them. I love to remember way back. Way back to Pearl White’s pictures. I adored her. Maybe that’s why I hate ever having a double for my hazardous scenes even today. She did all of her own stunts. And she was my idol.

I’ve been warned that I shouldn’t admit my age, that such an admission will hurt my “box office.” Now, that’s silly! After all, movie audiences aren’t made up of dopes. They can count, can’t they? And if they’ve noticed me at all, they certainly remember that I’ve been on the screen for quite a spell.