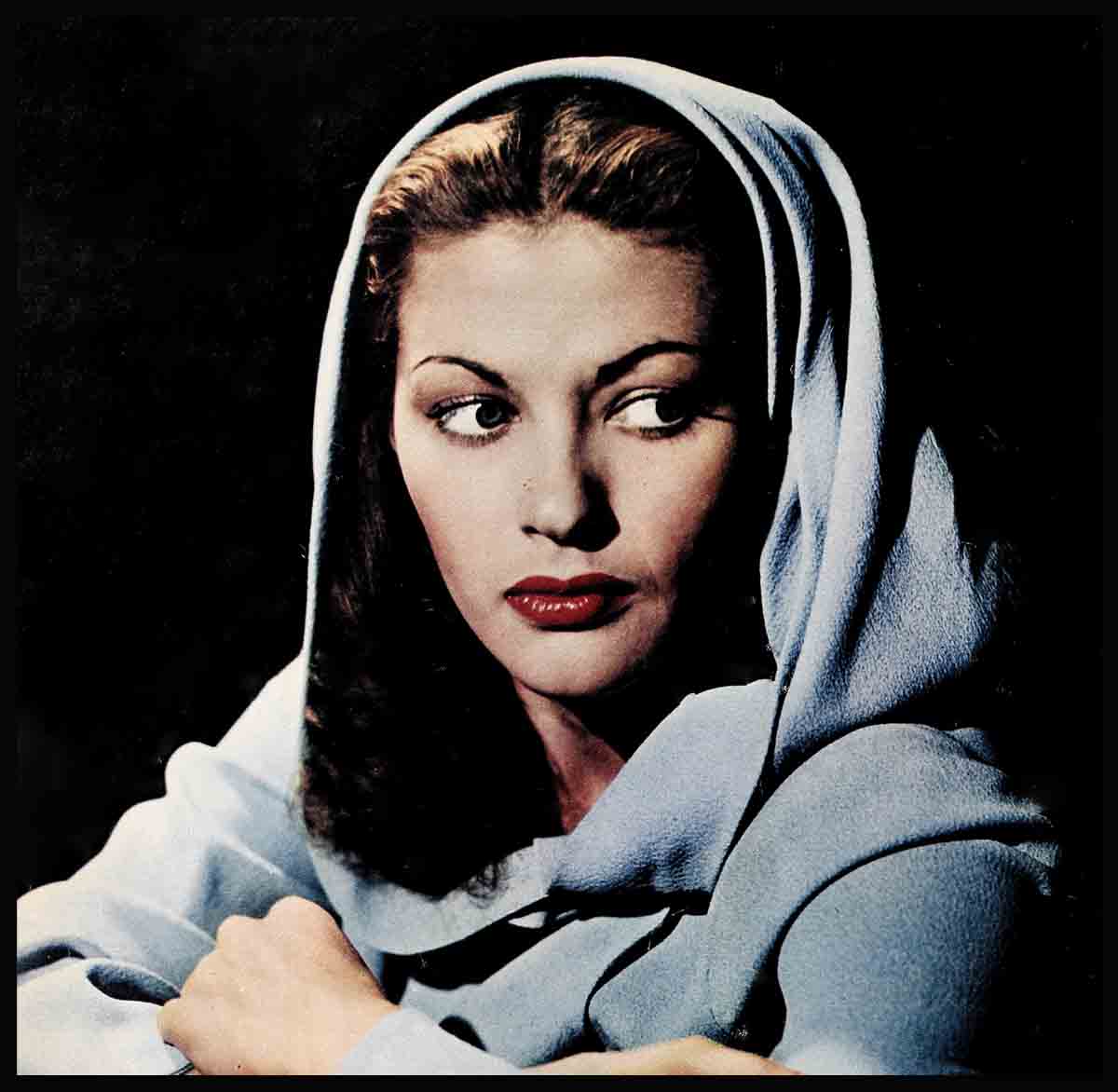 A couple of months ago an elderly couple from the Middle West were vacationing in Hollywood. Of course they wound up at the swank night club Mocambo—and there on the dance floor they spied a handsome young man dancing with the most exotic young woman they had ever seen. Imagine seeing in the flesh the star of “Frontier Gal” and “Salome, Where She Danced”—Yvonne De Carlo herself! They watched, fascinated, while the movie couple danced. Yvonne’s green gaze seemed to be locked in her companion’s, and her famous figure followed his sinuously in the movement of the rumba.

“She looks as smouldering off-screen as she does on,” said the wife, awed and delighted.

Her husband nodded, his eyes popping out of his head. “And she sure acts in love with that young fellow,” he commented. “Let’s dance next to them and hear what they’re saying.”

They did—expecting to eavesdrop on molten lines from a hot-lick version of “Romeo and Juliet.”

Instead, as they passed Yvonne she was imitating a dead-end kid’s voice. “Stick with me, bub,” she was snarling in her escort’s face, “and I’ll get your name in the papers!”

The young man snarled back, “Ahhh—shaddup or I’ll hit ya!”

The elderly couple crept back to their table, shattered. How could they know that this was love-talk between Yvonne and Burt Lancaster, new find in “The Killers”? Or that the next moment they were in a discussion of the music of Sibelius? Or that the following one they were arguing about horses?

By that time the elderly couple had gone home—which was their big mistake. For had they carried their sleuthing a little further they would have discovered a number of unpredictable Yvonnes all housed in the same intriguing frame.

The start of the De Carlo-Lancaster idyl was typical. The minute Burt stepped on the Universal lot (description—tousled light brown hair, blue eyes, six feet three inches of muscular build), all the matchmakers at the studio said, “Yipes! We must bring him and Yvonne together!”

So they did. The setting was perfect—a romantic tropical set complete with palm trees. The costumes were perfect: Burt was dressed in prize-fighter tights for his role in “The Killers,” and Yvonne was wearing one of her breath-taking dancing costumes. But the result! Bored at first sight! They each nodded a brief and faintly sneering, “How do you do,” and then walked rapidly in opposite directions.

Two months later, Yvonne went to a big Hollywood party escorted by a man who had best remain nameless. The dress she wore was one of her De Carlo designs—a gray background print with big splashes of red and yellow flowers picked out in sequins. She was warmly cordial to everyone she met—and then she remet Mr. Lancaster. The bow she gave him was ice trimmed. But he acted as if she had enveloped him in a torrid embrace.

“Darling!” he shouted. “I’ve been waiting impatiently for you to come—let’s dance!” Dance they did. And while they danced they exchanged insults.

“What a stuck-up, affected star role you were playing when I first met you,” murmured Burt in her ear as they tangoed.

“May I say the same? And you haven’t changed on second sight,” said Yvonne in her most honeyed tones.

But Burt had more to say and he said it. “Know when I first liked your looks? When I saw you a week ago, walking across the lot on your way home. You were wearing flat sandals and a little print peasant dress. You looked like an Italian peasant girl and you looked swell!”

“Exactly. And you look almost natural tonight!” he added.

So what was the result of Meeting Number Two? She ditched her escort and went to dinner with Burt to continue the Battle of the Sexes. It’s been going on ever since, at swimming pools, amusement parks, symphonies and stables. Speaking of stables, when Yvonne finishes with Burt, he’ll be as much of a horseflesh expert as she—she’s teaching him all the tricks of riding. Meanwhile they carry on their kidding-quarrelsome romance everywhere in Hollywood . . . whenever she isn’t off boating with Stirling Hayden. Or talking aviation with Howard Hughes. Or going out with some new swain.

Not that she doesn’t have women friends, too, whom she jams into her jigsaw puzzle days. She sees Pat Starling, Helen Walker, Ava Gardner and Maria Montez regularly and often.

But mainly she’s acting on impulse—all over Southern California. On Sundays, for instance, her telephone rings steadily with invitations to come swimming at lavish pools, in her most lavish bathing suits. But does she accept? No. Because, much earlier that morning, Stirling Hayden had walked from the sixty-five-foot schooner he calls home across a dock and into a public telephone booth. There he had called Yvonne and said “How about some day labor on your day off, kid?”

And Yvonne, lying in her huge bed looking up at its silken canopy, had said, “Surest thing you know!” With which she had replaced her satin night gown with a pair of faded and paint-splashed blue jeans. Then she had added a pair of dirty tennis sneakers, a patched shirt and she was ready to kiss her mother goodbye for the day and drive down to Santa Monica harbor and Stirling’s boat—to swab decks and polish brass with Stirling.

Her parties are as unpredictable as her life. To begin with, they’re so small they can hardly be called parties . . . yet the most unexpected things happen at them!

Take the last one. She gave it in honor of the RCAF flier who made her a star by leading twenty buddies in sending her picture to Walter Wanger. His name is Ken Ross-MacKenzie and he had just flown down from Vancouver. The minute Yvonne heard his voice over the telephone, she shrieked cordially, “I must give a party for you—tonight! Come at six!” She then gave him the address of her one-acre ranch in San Fernando Valley (which boasts a one-string of horses), and called Ava Gardner, Burt Lancaster, Maria Montez and Pierre Aumont.

Then she herded her mother into the kitchen to get a bouffet dinner, topped by a big ham. At six o’clock, Ken Ross-MacKenzie arrived, and Maria and Pierre.

They were coated knee-high with mud.

Yvonne was amazed. “Where did the mud come from?” she inquired.

“From the road outside your house,” they informed her sourly. “No doubt you overlooked it, but all the roads around here are tom up. The city is apparently laying pipes. And we will bet you two to one that your other guests never get here.”

They lost their bet because both other guests arrived. But Burt Lancaster was an hour late, and Ava Gardner two hours tardy—and each blanketed in mud. Their cars were stuck hopelessly in ruts a block away. Burt got his out—with the help of a tow-truck and some heavy boards—in time to go home but Ava’s stayed tipped in a muddy ditch all night long. She hitched a ride home with the other guests.

After dinner three neighborhood musicians plowed through the mud to entertain them with a jam session. It was a fine party . . . although everyone spent it in their stockinged feet to avoid tracking mud on Yvonne’s new rugs!

One of the most unpredictable things about Yvonne is her attitude toward the “Keep Face” rule of Hollywood—where everyone buys swimming pools, mansions, cars and coats on the installment plan, but nobody mentions same. Nobody except De Carlo. When she first bought her one-acre estate she told everyone blithely, “Yes when I get the mortgage paid off it’ll be mine, all mine!” Everyone gasped. Nobody had a comeback for that kind of repartee because nobody in those parts had ever before heard it.

By the time a mink coat came into her life, people should have been used to her honesty. The mink coat was a result of a good-will tour she made to Mexico.

“I simply have to have a mink coat and I can’t afford one,” she told people at parties. “Natch, I’ll have to rent one for the trip!”

“Natch,” everyone murmured uneasily. Renting mink coats is common practice in Hollywood. But if you waited to hear it talked about, you’d wait forever.

The end of the story is that after she’d worn the rented luxury for three weeks in Mexico she couldn’t bear to let it go. She bought it.

“Even though I can’t afford it and it means cutting down on other things plenty,” says she. “But now, at last, I’ve got a home, a horse and a mink coat.” She could have added that she has a very glittering screen future which may make mink coats and mortgages less of a problem. “Song of Scheherazade” in which she’s starred with Jean Pierre Aumont will be released any minute now—and there’s “Slave Girl,” now in the making—and both of them are in gorgeous Technicolor.

Then there’s her wardrobe, which is the most unusual one in town.

Everywhere she goes she picks up ideas for it. A present from A. C. Blumenthal in Mexico City provided the basis for one stunning outfit. He gave her a black patent leather belt with the silver soles of bare feet marching along it, and one huge silver foot making the clasp. It has matching black gloves, with the silver feet used as cufflinks on them. With these eye-stopping accessories she wears plain black, in a dress designed by her and made by her dressmaker Dorothy Thompson.

But everything inspires an outfit. The New York musical “Carousel” gave her another idea, inspired by a chorus girl’s costume: A laced-bodice dress in bright green, worn with a hat decked in cherries. Everywhere she goes she buys materials in all colors but black—each material giving her an idea.

One reason for her enthusiasms is that she has energy for them. Where most people drop dead of exhaustion, Yvonne is just getting started. On a recent flying trip to New York, this was an average day: She bought two coats, four dresses, a pair of earrings, two handbags, fifteen albums of records, twelve highball glasses; she lunched at Toot Shor’s, dined at “21,” and saw the play “Oh Mistress Mine”! Home again to her hotel suite? She turned on her rented record machine and contentedly played all the records she had just bought, including the original “Salome” dance record. Argentine rhythms and African and Chinese music—whose wailing chants fascinate her.

“The truth is that I’m trying to live two lifetimes in one, I guess,” Yvonne sums it all up. “I read all the time, three books at once. Right now I’m reading ‘Lie Down in Darkness’ and ‘Lion in the Streets.’ ” She laughs. “And another book—‘How Never to Get Tired!’ ” That’s one book Yvonne doesn’t need to read. She might very well have written it herself with all that boundless energy. And every erg of it goes into whatever she does—be it swabbing decks in paint-splashed blue jeans, riding horseback in jodhpurs or premiere-ing in the mink coat she couldn’t really afford!