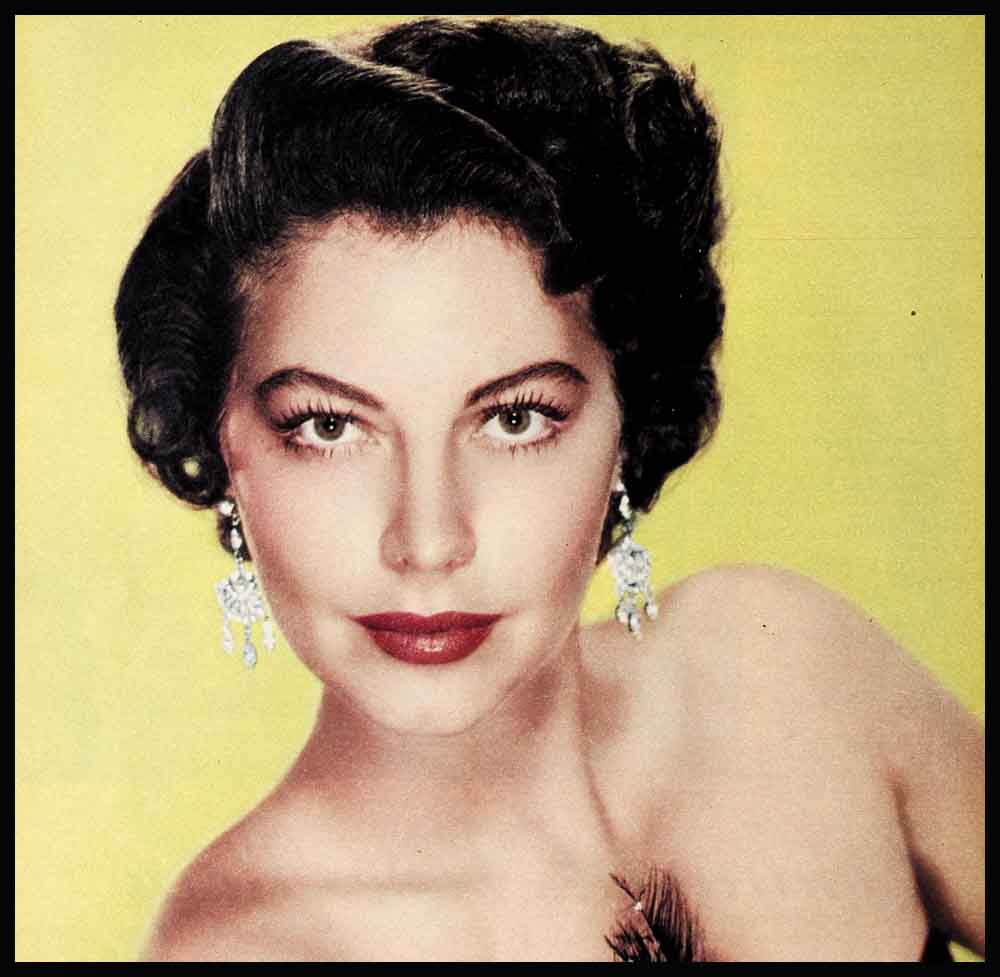 I predict that Ava Gardner and Frank Sinatra will be married this summer . . .

Theirs has been a long and a dramatic romance. For it was back in January of 1950 that Nancy Sinatra cried “Enough”—after Ava had appeared with Frankie in Houston, Texas, where he was singing.

The cameramen who spied them there were greeted by Frankie’s back. Ava covered her face with her hands. Which only produced a more sensational grab shot. Surprising, isn’t it, that the Hollywood stars, drilled in public relations by their studio publicity department and by the personal press agents they employ, forget everything they’ve ever been taught when they need it most. Proving, no doubt, that human impulses always will be stronger than any superficial knowledge.

This was not the first time Nancy had had trouble with a roaming husband. Nor is Frankie’s susceptibility a product of his success. His penchant for romance troubled the Sinatras’ bliss long before their separation in 1946 when Frank’s name was linked with Lana Turner’s.

But always before, Frank has come home one dinnertime with a “Hi! Where’s the spaghetti?” Once he arrived less casually, a $12,000 ermine coat slung over his arm. His apologies are likely to be worded in ermine, pearls or a Cadillac. Let it be said, neither to Frank’s credit nor his discredit, merely as a fact, that he is generous to a fault. Frank knows he should have more respect for money but he’s never been known to do anything about this—except to keep his eyes open for a good site for a gas station when he drives through his old town of Hoboken, New Jersey. “It’s a cinch I’ll wind up running a gas station there,” he tells you.

All these things Ava knows. Which indicates to me that she is as completely in love with Frankie as she appeared to be the night I met them at a party and Frank, proudly, introduced her to me.

It’s perfectly true that under his contract with Columbia Broadcasting System Frank will make $3,000,000 in the next three years. That’s a powerful lot of money—until you start paying the taxes and surtaxes that, it is reported, leave only about twenty per cent of the gross income; then deducting Nancy’s allowance of one-third of his income up to $150,000 and ten per cent after that; paying the bills for the lavish manner in which Frank lives, his percentages to his agents, his clothes, his beaux gestes.

As far as money goes Ava is in a position to make for herself as much money as any individual is allowed to keep these days. As Julie in “Show Boat” she is a Technicolored sensation. But she still says—as she said back in 1942 when, at twenty, she married Mickey Rooney, divorcing him a year later—and again in 1946 when she married Artie Shaw to whom she was wed for exactly eight months—“I don’t especially want to work. Most of all I want to be married and have children. I also want more education. My career I put third.”

For Frankie certainly Ava has jeopardized her career, more than once. After the great to-do she and Frankie and the bull-fighter, Mario Cabre, staged in Spain, the executives at M-G-M spoke to her very plainly. They gave her warning first over the trans-Atlantic phone. When she returned to Hollywood she was put “on the carpet.” But she countered plain talking with more plain talking. In answer to one gentleman’s criticism of Frankie I hear she replied that the only difference between Frankie and the executive was the fact that Frankie is thirty-three years old and the executive was close to twice that—so if all that Frankie had done was so terrible then such similar conduct on the executive’s part was inexcusable; he surely was old enough to know better.

Nancy’s family resent Ava. They blame her, not Frank, for what has happened. Frank, they say, is all “mixed up.” They wish he would meet someone else and be diverted. That Frank and Ava are in love never occurs to the Barbatos.

Ava’s attitude irks them. Which is understandable. When Ava’s in Hollywood she drives Frank’s Cadillac around town. And the instant she’s free of production she flies to wherever he is. Ava spent weeks in New York shopping, with Frank’s mother, for the furnishings for his Park Avenue apartment. Last winter and early this spring Frankie and Ava had trysts at Palm Springs, with Frankie’s sponsors very nervous indeed about the way he winged back and forth, often returning to New York barely in time for his TV rehearsal.

Now all of this well might be damned as brazen conduct on Ava’s part. But I do not believe it is. If Ava broke up the Sinatra marriage she did an unforgivable thing. Frank in leaving home left not only his wife but three children, little Nancy, now eleven, little Frank, seven and a half, and Christina nearly three. But Frank swears his trouble with Nancy preceded his association with Ava, that Ava is wholly innocent of any blame in the break-up. A great many people in Hollywood agree. And Ava, who is convinced she had nothing to do with the Sinatra break-up, is naturally a forthright creature, not given to furtive conduct.

Also, whenever Ava and Frankie have been together they have been chaperoned. And her statements to the press have been guarded. Only once did she almost break down when in London she said: “I can’t go around screaming I am in love with somebody who isn’t even divorced. I think Frank is wonderful and if I were in love with anybody it would be him.”

Ava would have you know that she is no femme fatale. And it is true there’s nothing remotely mysterious about her. She adores children, is godmother of Van and Frances Heflin’s four-year-old Kathy and great friends with artist Paul Clemens’s ten-year-old daughter. She’s a man’s girl; a good companion who likes prize fights and sports; gay, comfortable, easy-going.

Whenever Ava gets dressed up she’s wonderful to see, as she was the night Frankie opened at the Copacabana in New York and she postponed her flight to Europe to applaud him from a ringside table.

I’ve often wondered with what mixed emotions Frankie sang that night with Ava in his audience and a good luck telegram from Nancy tucked in the mirror in his dressing room.

A couple of nights later, Ava left for Europe. Reporters and photographers at the airfield looked everywhere for Frankie. And never found him. He was there just the same. But he and Ava said good-bye in the big limousine which brought them from the city while Ava’s sister, Beatrice, who went to Europe with her, checked final flight arrangements.

I’ve wondered, I admit, about the throat hemorrhage which forced Frankie to leave his Copa engagement and fly to Spain at the very moment Toreador Mario Cabre was protesting of Ava, “She is the woman I love with all my soul.”

There was a great hurrah over a $10,000 necklace Frank was reported to have taken to Ava. Such a gift would be typical. But Ava—maybe for politic reasons—insists Frank brought her only six bottles of a soft drink and chewing gum.

The day Frank arrived at Ava’s villa on the Mediterranean, outside of Barcelona, a drenching rain was falling. So Ava, unable to work, was waiting for him. They lunched and spent a long afternoon alone, talking. Anyone who knows them knows what they talked about—their plans, if and when Nancy agrees to a divorce. Then they drove to a great estate called La Bastida where the James Masons were living. There Frankie stayed the night while Ava was put up at another estate near by.

“He has gone,” Ava told reporters the next morning. “I will not see him again until late summer when I’m through production and return to New York.”

But somehow in July, when Ava was working in the London studios, Frankie was in London. They were carefully chaperoned by Ava’s sister, Beatrice, who lived with Ava in her Park Lane flat.

In Spain Mario Cabre told reporters, “I’m not going to marry Ava, because it takes two to be in love.”

But this time Frankie, too, was convinced Mario never was going to marry Ava. Where he had been very unhappy about Mario a few months earlier, he now was equal to little jokes about him.

“When Frank gets back,” Ava told reporters when she flew home, “he’s threatening to arrive with his hair in a braid and wearing a bullfighter’s costume.”

He came—wearing no braid and no bullfighter’s costume—but bearing gifts … a gold charm bracelet from Paris for Nancy, toys for his children.

Rumors of a reconciliation were rife. They also were short-lived. Because by this time all Hollywood was buzzing with all the things Ava had had to say to the M-G-M bosses who were said to be thinking about withholding the plum role of Julie in “Showboat” from Ava unless she quit seeing Sinatra once and for all.

“I don’t get it,” a young starlet on the Metro lot said. “I can see what Sinatra sees in her all right. I’m not blind. But what she sees in him—that’s the puzzle.”

I know what Ava sees in Frankie. . . . He’s no Adonis. He can be rude and abrupt. He’s hotheaded. He never lets his right hand know what his left hand does— and this probably is just as well. He has associated with wrong people in his time, suspect.

But there’s more to Frankie than this. We met, in 1943, as implacable enemies, for I had attacked him frightfully in my newspaper column. Soon, however, we became friends. How this happened is a fascinating story which I must save for next month when I’ll also tell how—although Hollywood insists Nancy never will give Frank a divorce and Ava never will submit to a high flyer in Mexico without Nancy’s permission—I think their summer marriage will be arranged.

Next month, Elsa follows up her amazing prediction with her reasons for making it—and more behind-the-headline news about Ava and Frankie. Reserve your July Photoplay now—on sale June 8.