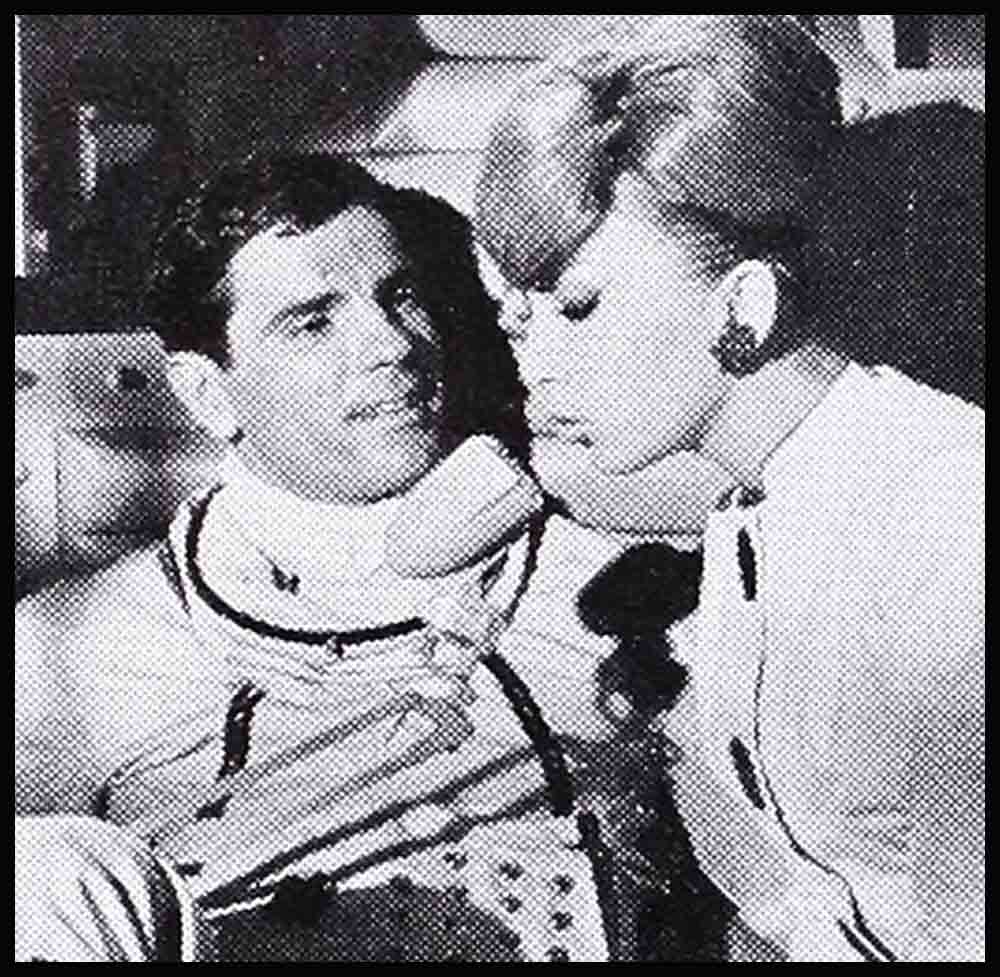 WHAT’S IT ABOUT? Too much mother love turns a boy into a wandering ruffian, unworthy of his kid brother’s worship.

WHAT’S THE VERDICT? This substantial family drama is really Brandon’s picture, though Warren does a strong job in an unpleasant, eventually pathetic role. It’s Eva’s best chance in years; Karl and Angela Lansbury (as the foolish mother) also help brush some of the psychiatry-textbook dust off the film’s rather involved story.

WHAT’S IT ABOUT? Impact of fame on the American Indian involved in the Iwo Jima flag-raising of World War II

WHAT’S THE VERDICT? Tony’s great performance gives unnerving force to this fact-based story. As blunt as a news item, the movie fails to probe far into its subjects—Indians’ problems, combat reactions, alcoholism. But the hero can’t see into these unfortunate problems, either, and his bewilderment becomes heartbreaking.

WHAT’S IT ABOUT? At a China mission, two American priests and a girl in love with one of them are caught by Reds.

WHAT’S THE VERDICT? Recalling his old Crosby-Fitzgerald hit, “Going My Way,” movie-maker Leo McCarey finds another likable, skillful team to play feuding, friendly clerics. But he picks an unlikely spot—China of 1949—for a light comedy-melodrama, and he tries to juggle too many tricky, touchy themes at the same time.

THE FOUR HORSEMEN OF THE APOCALYPSE

WHAT’S IT ABOUT? In war-time Paris, an Argentine family is split by its mixed herit-age: French and German.

WHAT’S THE VERDICT? The 1921 hit that made Valentino a star gets a spectacular new production, in 142 plot-filled minutes. Maybe it was believable as a World War I epic, but its rich, luscious dramatics are out of place in grim World War II. Glenn (at ease in his other current picture) is fantastically miscast.

WHAT’S IT ABOUT? A crazed killer tries to frighten a girl bank-teller into committing a robbery for him.

WHAT’S THE VERDICT? For once, we meet a thriller heroine smart enough to call the law right away. Only trouble is: This cuts the suspense. We know we can rely on G-man Glenn to save Lee and Stefanie (a sweet new teenager). The film’s long length (two hours) spreads the shivers rather thin.

WHAT’S IT ABOUT? Before a U.S. astronaut gets off the ground, a mysterious (and pretty) stranger shadows him.

WHAT’S THE VERDICT? It’s refreshing to see solemn topics like space flight and spy hunts turned into pure knockabout comedy. With Tom as a breezy hero and Dany as a pert visitor (from where?), good old l-o-v-e bewilders the brass (Brian) and makes a clown of the secret service (Edmond). It’s pretty funny!

THE DAY THE EARTH CAUGHT FIRE

WHAT’S IT ABOUT? Horrifying results of a coincidence in super-bomb testing, as seen by a London newspaperman.

WHAT’S THE VERDICT? You might call it science-fiction, but it’s done with such good, sharp realism that it seems uncomfortably unfictitious. It could be in tomorrow’s headlines! Edward is a fascinating newcomer (a British Paul Newman), and Janet has suddenly taken on a new personality—the very earthy type.

WHAT’S IT ABOUT? A gallant knight’s crusade to rescue his beloved princess, with magic working for and against him.

WHAT’S THE VERDICT? What a relief to be back in the Dark Ages, when humanity just worried about trifles like fiery dragons and wicked wizards! In this cheerful, old-fashioned yarn, Gary (of TV’s “Follow the Sun”) is a decorative hero, though be should have taken acting lessons from his older and better co-players.

TOMORROW IS MY TURN

WHAT’S IT ABOUT? The effect of World War II experiences on two Frenchmen. sent as prisoners to German farms.

WHAT’S THE VERDICT? A deeply felt, wonderfully civilized movie, dealing with human emotions that cut across and transcend national boundaries. The performances are all splendid, but Aznavour (singer turned actor) creates a truly lovable, thoroughly rounded character, as contrasted with Riviere’s adventurer.

ONLY TWO CAN PLAY

WHAT’S IT ABOUT? Fed up with family life and his library job, a Welshman tries a fling with an uppercrust dame.

WHAT’S THE VERDICT? You’ll find the bits of sly humor and the sparkle of skill that you’d expect of a Sellers film. But this one does almost as much fumbling around as the fellow in its story. Like him, it isn’t sure whether it’s making a serious social gesture or just whooping off in brief search of fun and games.

WHAT’S IT ABOUT? An American girl’s charm almost ruins her business opportunities as a midwife in a Sicily town.

WHAT’S THE VERDICT? Skating deliberately around the edges of bad taste. this comedy never quite falls in. It goes up to its ears in sentimentality instead. Even Chevalier can’t cope with some of the embarrassingly awkward scenes. But the scenery’s fine, one beautiful view after another. Too bad the story’s not as good.