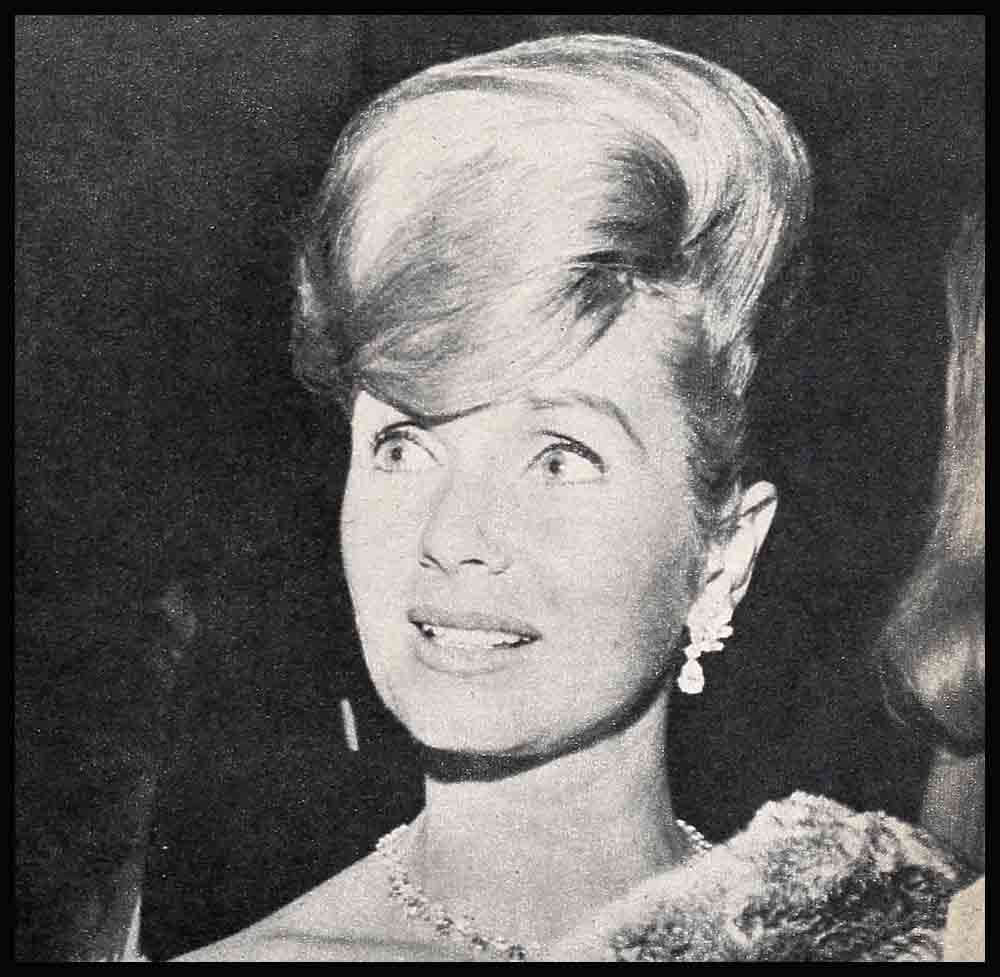 Debbie & Eddie Together For Children’s Sake

It was a long black car; shiny, quiet and expensive. It pulled up to the front of the pleasant, beautifully landscaped home and stopped. The driver, much like a chauffeur, sat silent behind the wheel for a moment. Then he turned to the man seated in the rear.

The man in the rear seat looked out at the home. He stared at its windows and its doors and at the greens and the flowers and the trees that surrounded the house.

For the briefest instant there seemed to be a yearning in his dark, brown eyes; as though he was longing for something he knew was behind the walls of the house, something he wanted desperately, something he knew he might never have. He spoke to the man at the wheel: “Yes, you can bring them out now.”

As the driver walked to the door, the expression of longing in the man’s eyes became one of loneliness, the kind that burrowed deep into his heart. The man sat there, silently.

Eddie Fisher took a deep breath. It wouldn’t do for the kids to catch him in a mood like this. Kids can tell. Leave it to kids.

The door to the house opened suddenly. Carrie Fisher, her bright. brown hair bouncing in the sun, fled down the lawn, her heart ten steps ahead of her.

And then came Todd, helter-skelter. His joy was as loud as his sister’s, though he was all of three years younger.

They climbed into the car and then climbed all over their father. They kissed him and hugged him, but he had to be very careful.

To hug them back as hard as he felt happy would have hurt them.

Eddie Fisher might have hurt his children’s mother, but he’d die before he hurt those kids.

It might surprise many, but Eddie Fisher and Debbie Reynolds have gone to unusual lengths not to hurt those kids. At the present time they are closer together as mother and father than they were as husband and wife. As a married couple, a woman came between them. As mother and father, their children have kept them together.

It is a strange togetherness . . . a togetherness which, oddly enough, is approved by Harry Karl, Debbie’s second husband.

“In some respects,” says a friend of Debbie’s, “it is a magnificient conspiracy. Somehow, with care and meticulous behavior at the right times, Debbie and Eddie have preserved an illusion for their children. To Carrie and Todd, Mommy and Daddy are still together. Yes, these children are young and the cold facts of the situation are beyond them, though someday they will understand. Oh, it isn’t that Debbie has concealed anything from the children! But she has, with some miraculous facility, dissipated almost entirely the thought that anything is wrong between their parents. As far as the children are concerned, their home and their parents are solid. The fact that Debbie and Eddie live apart is nothing to them, just a crazy arrangement between two adults that is more fun for them than inconvenient.” For now, anyhow, it works.

And so carefully honored is this unspoken, yet successful togetherness between Debbie and Eddie, for the children’s sake, that it is difficult to explain why, when the couple were husband and wife, they couldn’t have used the same technique to settle their differences.

When Eddie left Debbie for Liz, it was assumed that no abandoned wife ever had more right to complete custody of the children. Few argued Debbie’s unhappy privilege.

But, contrary to all presumptions of vindictiveness, Debbie, when the air had cleared, got the message to Eddie that anytime he wanted to be with the children all he need do was ask.

Debbie’s generosity surprised everyone except those who knew her.

So for nearly three years now Eddie has seen his children whenever possible.

During some periods when he is close to Hollywood, Eddie has seen Carrie and Todd as often as three times a week. The children, as may be imagined, love to visit Eddie. And they also love his favorite gift to them—a stuffed animal, the big plushy, snuggly kind they take to bed with them.

Neither Debbie nor Harry Karl ever accompany the children on their visits to Eddie. Debbie feels it is wiser to be absent and Harry believes that his presence might be misinterpreted as interference or over-protection.

This remarkable air of togetherness which the children always find is not superficial and in many ways is much stronger than the casual observer might believe.

Debbie’s awareness of her special responsibilities to the children is sharp and alive. Her dedication to the proper rearing of the Fisher offspring goes far beyond the simple publicity image of her being a “good” mother.

She is more than that. Carrie and Todd are never pampered during the everyday routine of their lives. Special privileges, such as the movies, a trip to the park, the circus or other little private festivities, are earned.

“Those children behave,” says a friend of the family. “But they know why they must behave. They are obedient not through fear, but through understanding. They have been taught the need for good conduct, not only as a convenience to Debbie, but because they seem to sense that good behavior is important to their own self-respect. You’d be surprised, considering their age, at how much self-respect they have.

“Once Todd wanted to pull apart one of the big cloth animals Eddie had given him. Carrie, a remarkably intelligent little girl said, quite casually, ‘Do you want to own an animal with all its stuffin’s pulled out?’ She looked just like her mother then.

“Todd considered that for a long moment and then said, ‘No . . . and people would think I’m mean.’ The animal is still in one piece.”

Eddie’s feelings toward the children are extremely emotional. His joy and enthusiasm in their presence is unbounded. Those who work with him point out that when he gets up on certain mornings he is a different man than he was the day before. “He eats better and even sings better during rehearsals,” one says.

On those days Eddie will say, as often as ten or fifteen times before noon, “I feel great, I’m going to see the kids today.” And his feelings of protection and attachment to his children are a powerful force in him which are not to be trifled with in any way. He’s definite about that.

“Over my dead body!”

Recently, during a party in the home of a business associate, Eddie was discussing his latest romp with “my kids.” Someone asked if he had heard that Harry Karl was considering adopting the children.

“I heard that,” Eddie commented, “but I don’t believe Harry is considering any such thing. He knows exactly how I feel about my kids. The only way he could ever adopt them is over my dead body.”

The relationship, incidentally, between Harry and Eddie has been called “strained.”

This is not true. Prior to his romance and eventual marriage to Debbie, Harry had met Eddie many times. They were never really close friends, not because of any incompatibility of personalities, but their paths just never crossed that often. But Karl is keenly aware of Eddie’s feeling for the children. And he has taken great care not to interfere nor disturb the togetherness that Debbie and Eddie have developed for the children’s sakes. He understands how it is.

Harry has children of his own with his former wife Marie MacDonald, and he understands the delicacy of Eddie’s status as a “daddy” who does not live with “mommy.”

Those close to Eddie and to Debbie respect the divorced couple’s high-minded approach to a predicament frequently mishandled by the most well-meaning of divorced parents. And that was why a lot of people were surprised recently when a trade paper printed an item that Debbie and Eddie had taken the children to a PTA circus.

Both Debbie and Eddie hesitated to comment on the item for fear of creating more publicity. But, finally, Debbie not only denied it for PHOTOPLAY, but became furious at the irresponsibility of the columnist who printed the story.

Debbie’s wrath was understandable. For weeks, false rumors grapevined all over Hollywood that she and Harry are not getting along well. Another disturbing item, adding fire to her incense, recently stated that her neighbors were thinking about tape recording the supposed quarrels she was having with Harry.

Again Debbie suffered the exasperating aggravation of having to cope with completely unfounded reports. Those who know the Karls, of course, discount such stories. Debbie knows this, but since much of Hollywood believes anything it sees in print, the Karls are burdened unfairly with the worry that others might believe it.

He gambled and lost

As a result Debbie and Eddie are presently even more reluctant to discuss their private lives.

There is, however, a truth buried deep in the relationship between Debbie and Eddie.

When Eddie walked off with Liz Taylor he gambled with a lifetime of happiness. He got what he wanted but he didn’t hold it long.

Debbie suffered and survived. No woman ever had more right to resent the return of an ex-husband. But today she is happy. She no longer thinks of the past. “That hurt is a closed chapter in my life,” she told PHOTOPLAY, “and I am bitter toward no one. I wish nothing but success and happiness to Eddie.”

The children have two fathers, their own, who loves them and a new one who also loves them. When they leave Eddie, after a day with him, it is unlikely that they understand the reluctance of his goodbyes or the catch in his throat as they scramble from his side, back into the house with the greens and flowers and trees around it . . . back to their mother, a woman he once loved.

The children won’t know for a long time that Daddy, the man they left out in the back of the big black car, has no real home to go to, as they do. It’s worked out well for the kids.

And it’s worked out well for Debbie.

But their father gambled and lost.

And Eddie Fisher makes a payment every time his kids leave him.