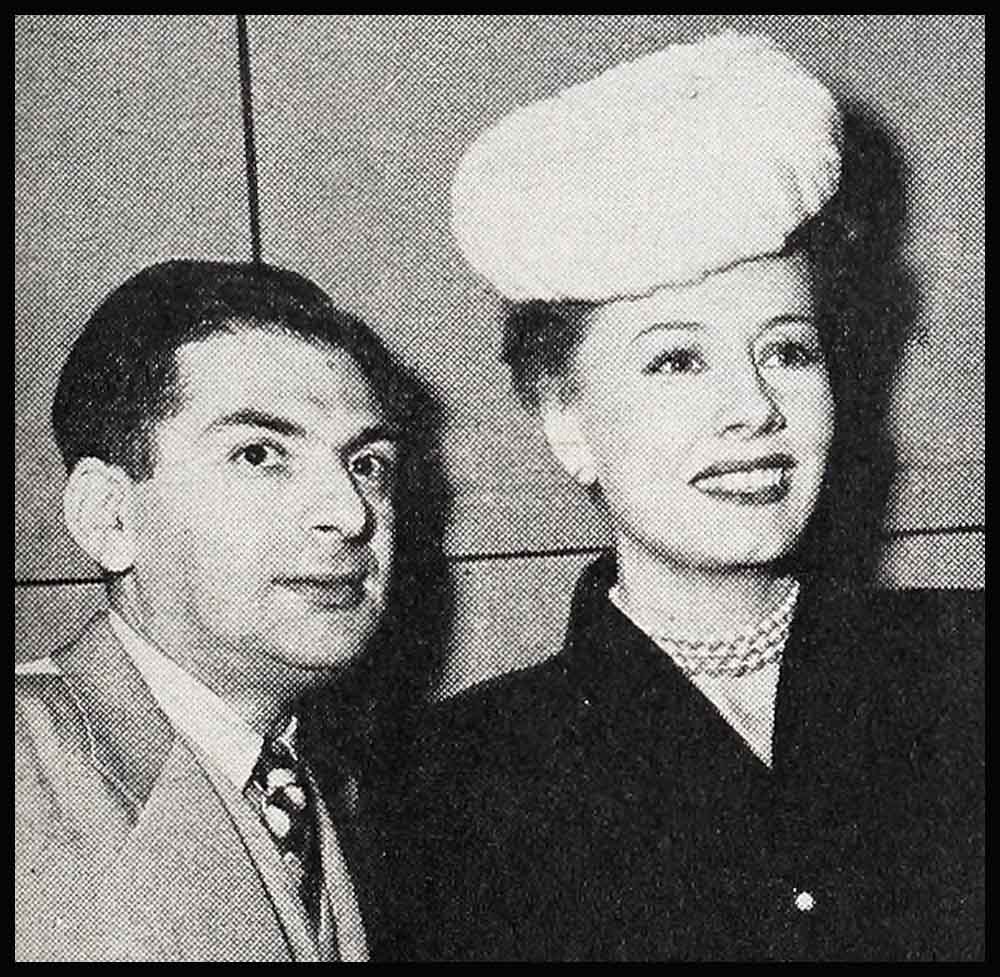 I go for Lauren Bacall, as who doesn’t, but I must admit that she puzzles me. Whenever I see her in a night club she acts exactly as she does on the screen, giving “that look,” and I don’t know whether she is acting, or if on the screen she is being natural … I admire Preston Sturges’s direction as much as anyone does, perhaps with the possible exception of Preston Sturges, but I do wish he would stop solving every situation with a pratt fail . . . Van Johnson is a favorite with me, too, and I just thought that you might be interested in knowing that Van sleeps in a pullover sweater. That’s all, just a sweater . . . I am getting tired of the mug type in pictures. They follow a pattern, and despite the current disciple, William Bendix, who has replaced Maxie Rosenbloom, they speak the same “dese, dose and dem” dialogue whether in civvies or in uniform . . . This sly remark uttered by Tom Jenk is almost a criticism, although Tom might not have meant it to be. Jenk said the credit on the screen reading, “Original Story By . . .” should read, “The Same Original Story By. . .”

I know of no actor whose success was more gratifying to Hollywood than Barry Fitzgerald’s. There was not one dissenting opinion, or a jealous note uttered by another actor, which is something for this cinema city . . . If I had to name the actress who is less inhibited than any, I guess I would name Lucille Ball, but that doesn’t mean that there aren’t restrictions . . . You can never tell who’s going to make a bright remark. Maria Montez tells me that before Pierre Aumont left for overseas, she told him she was going out to buy something to keep the moths away from his wardrobe while he was away. “it isn’t the moths I’m concerned about,” said Aumont. “Get something to keep away the wolves.”

I like to go to the movies with Hedy Lamarr for Hedy likes to hold hands while seeing a picture . . . The movie stars go to Mocambo or Ciro’s, but I prefer the Palladium, for the couples dancing there put on the best floor show in town . . . Greatly amazed I was when I visited Lana Turner’s house, and didn’t find a single sweater in her wardrobe. I guess that Lana keeps her sweaters in her dressing room at the studio, for a sweater to Lana is probably her working clothes . . . Director Mike Curtiz, who is one of my favorite characters, was talking to an actor and said, “I’m disappointed in you. I taught you everything I know, and still you don’t know anything.”

Humphrey Bogart is an actor who talks and acts very much off the screen as he does on, and whenever I meet him I get the impression that I am a character in one of his movies . . . I don’t know what the girls see in Gregory Peck, not that I can’t recognize his worth and ability as an actor, but then again maybe I’m not supposed to see that in Peck.

I always get a kick out of visiting the various commissaries at the different studios and watching the players, off guard, have their lunch. Every studio commissary has its own personality, which often reflects the character of the studio and the temperament of the executives. At Metro a specialty is the chicken soup which is the L. B. Mayer special because, it is said, far back in those days when Mayer couldn’t afford it, that was the kind of soup he relished.

The commissary where the performers dine at Warners is called “The Green Room,” and the walls are lined with the latest photographs of the actors and actresses. Ann Sheridan, one day, eating under the latest portrait of herself, looked up and remarked, “I almost didn’t recognize myself. But I know it’s me because I posed for it.” The executives at Warners have their own private dining room, where even such celebrities as Errol Flynn cannot eat, without an invitation. In this private dining room, over the fireplace, there is a printed sign which reads, “The names of the persons, places and incidents mentioned during conversation are purely coincidental and have no relationship to actual persons, places or incidents.”

I believe Anne Baxter is one of the sexiest actresses on the screen. Anyway she sends me, but somehow I always have the impression when I talk to Anne that she is trying to act grown up and sophisticated . . . I have yet to see Cary Grant in a bad picture. I know that he has appeared in a couple of bad ones, but the fact that Cary Grant is in it makes it a better picture for me . . . In the early days of pictures, they would try to keep the fact that an actress was married a secret, because the male fans were supposed to resent the fact that their heroine was already taken. But now there is a new set of morals, and it doesn’t make a bit of difference to the boys that Betty Grable is married. They still pin her up. And so far as Grable is concerned, I’m one of the boys . . . Joseph Cotten on the screen, especially his voice, reminds me of Orson Welles. I asked Rita Hayworth if Joe Gotten reminded her of Orson and she replied, “In some ways yes, but in other ways no.” . . . Alfred Hitchcock will admit to you that he seldom goes to the movies, but when he made this admission to Gregory Ratoff, Ratoff said, “I don’t understand it. Then where do you get your material?”

I want you to come with me now, just for a couple of minutes, into the dressing rooms of certain actors and actresses. I know you won’t object, and you’ll probably enjoy it as much as I do. Paulette Goddard’s dressing room at Paramount is on the main Street there, up four steps, and is neatly furnished. Miss Goddard usually has a gown lying on her couch, and the walls of her dressing room are decorated with original Diego Rivera sketches . . . Across the Street from Paulette,’in what is known as “Star Row,” is the dressing room of Dorothy Lamour. Miss Lamour has only one photograph on her wall. It is an autographed photograph of Goo-Goo, the chimpanzee who has been with her in jungle films . . . Greer Garson’s dressing room at Metro is a swanky affair. It is practically all done in sea shells. The lamp is made of sea shells, and the backs of the chairs are decorated with sea shells, and over Miss Garson’s couch is a fishing net. Metro is the only studio that has separate dressing-room buildings for actors and actresses. When Mickey Rooney started at Metro, he had his dressing room in the actresses’ building, but soon the studio learned better and they moved him over with the men.

Bette Davis has what is known as “The Bungalow” at Warners. This is a perfectly equipped little house, parlor, bedroom and bath. Miss Davis has furnished it with her own furniture, and the two features of it are a canopied bed and stuffed dove wearing the beard that decorated Brian Aherne in “Juarez.” Bette Davis’s bungalow is a great hideout, and once while the studio was looking for her, she was residing there. . . The dressing rooms of the actors and actresses are really great, and James Cagney, sitting in his dressing-room suite, once said to me: “This is wonderful. I only wish that when I was a struggling actor on Broadway I could have had a hotel room as clean and as comfortable as this.”

I favor Marlene Dietrich’s principle that a woman should look her best in bed, and Marlene, when she isn’t on tour entertaining the soldiers, always makes up to go to bed . . . Ingrid Bergman is an actress who looks like what an actress should look like, to me, and she always appears so lady-like even though she does chew gum . . . I always look up to Irene Dunne on the screen for she appears tali to me, and she always portrays a lady. Therefore, you can imagine my surprise when I stood next to Irene Dunne with her shoes off on the set of “over Twenty-one” and discovered that I was as tali as she was. It’s so nice to have Irene Dunne with her shoes off . . . I like this sign which Darryl Zanuck had in his office: “Really great people never think they are great. Really small people never think they are small.” . . . The president of a brassiere company visiting Hollywood recently went on a tour of the studios. He said that he only wanted to see the actors, as he knew all about the actresses, and that’s Hollywood for you!