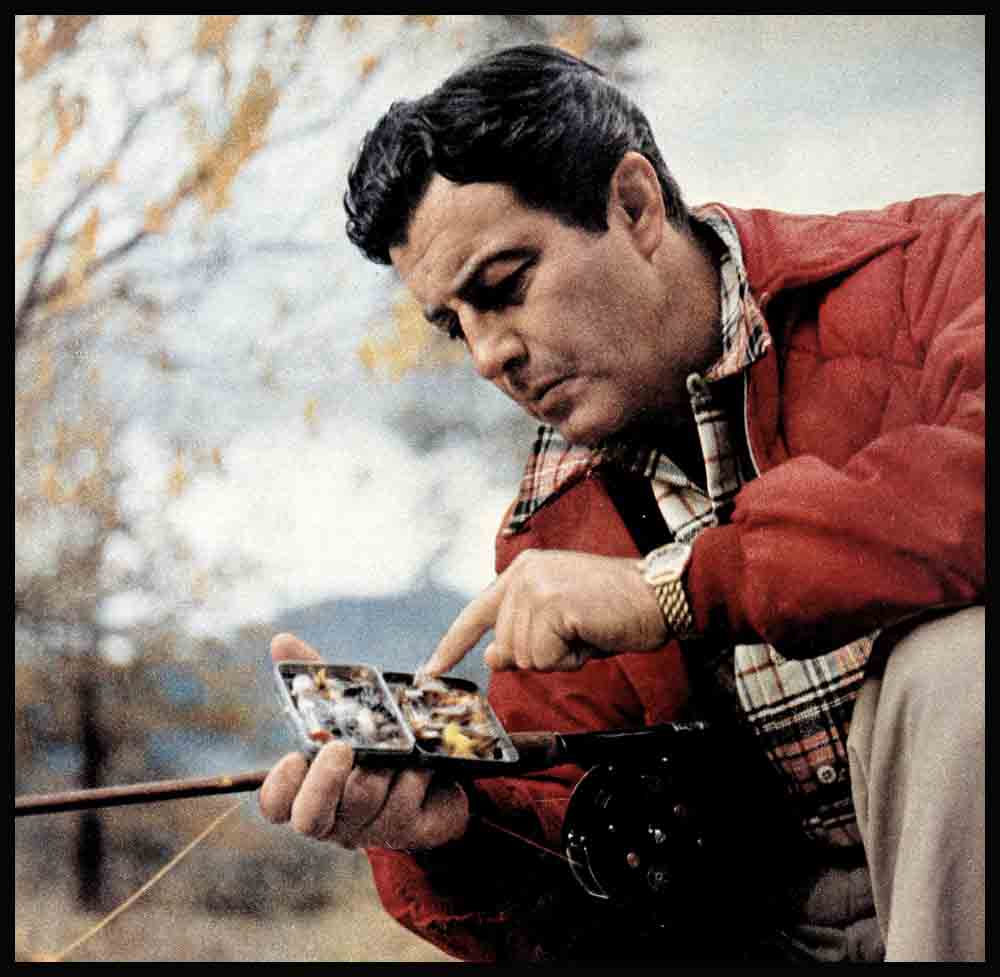 “At last, Bob Taylor has found real romance! Last night at dinner he had eyes for no one else but his charming companion, and no one seeing them at dinner could deny the man’s in love again.”

With variations, the above item has appeared in almost every columnist’s Hollywood gossip from time to time during the past year. The only change in the item has been in the name of Bob’s dinner companion—first there was Ludmilla Tcherina, then Linda Darnell, later Coleen Gray, Martha Vickers, Each new date brought speculations in print. And recently, with Bob being seen almost exclusively with beautiful Ursula Thiess, wise heads have nodded knowingly and said, “This is it. This is for real.”

But the previous hints of romance have not been for real. Each time the gossips thought Bob was getting serious he’d up and leave Hollywood, dashing off for a hunting trip to the Northwest, packing away from civilization for a fishing trip, or flying to Texas for a vacation jaunt away from those bright night spots of Hollywood. Each time Bob has given the appearance of a man running away from romance. Will the same thing happen to his romance with Ursula, admittedly the most serious of all?

Certainly there is a real depth of affection and warmth in the feeling of Bob and Ursula toward each other. And certainly their marriage would be an ideal one so far as Hollywood’s photographers are concerned—Bob the handsome hero, tops in popularity with such current films as “Above and Beyond” and “Ivanhoe,” and Ursula, so often spoken of as the most beautiful woman in Hollywood. But there are many obstacles—possibly even insurmountable ones—standing in the way of a trip to the altar for Bob and Ursula.

First and foremost, there is the question as to whether Bob is ready for another marriage. Repeatedly he has said that he wants to get married again, that he is lonely, but that he feels he may be unready for another try at wedded bliss. And possibly more than anything else, this is the explanation of his runaway disappearances, when he fades from the Hollywood scene to try to find himself in the wilds as he fishes or hunts. Certainly if Bob does marry again, it will not be a quick Hollywood-elopement type of marriage. It will come only as a result of deep thinking on Bob’s part, after he has analyzed the whole situation. An independent thinker, Bob has always been reticent in expressing his deepest thoughts freely. His biggest problem now—with his career at its peak—is the personal one of finding himself.

Certainly his dates—before Ursula—carried little hint of real romance, despite the gossip that each new girl was a serious love in Bob’s life. His dates with Ludmilla Tcherina, for instance, seemed serious to the columnists. But Bob himself said that they saw each other only a few times, and Ludmilla, mourning a husband dead less than a year, was not ready for nor awake to romance. She found Bob a gracious and charming companion. Nor was there a romance between Bob and Coleen Gray, despite gossip. Of most of these reports in the newspapers, Bob has had no comment.

Ursula, too, is somewhat reticent about revealing her innermost thoughts and emotions. She does admit, however, that there is a strong mutual feeling. “Of course we are attracted by each other—we are the same kind of people.”

But when it comes to discussing the possibility of marriage, Ursula is more hesitant. “We have no marriage plans with each other or anybody else. We are both very serious about these things. Both of us gave it a lot of thought before we were married the first time and we had tragic marriages anyhow. Well, you always learn something from a mistake. Right now we are both too full of ourselves and our own problems to think about marrying anyone.”

Just as Bob has recently confined most of his dates to those with Ursula, she admits that she has time for nobody else. “Nobody else interests me,” she says, “so why should I spend time with someone else when I can be with the person who interests me very much?”

And when those wise to the ways of Hollywood kiddingly say to Ursula that she is likely to fail in love with some handsome leading man, she merely smiles her warm, secret smile and answers, “Oh, but there is a very good reason why not. The best reason of all.”

Aside from the intangible factor of Bob’s possible unreadiness for another try at marriage, there is another and a very real obstacle standing in the way of any immediate wedding for Bob and Ursula. She is anxious to bring her family—her mother and her two daughters—to live in Hollywood, and she cannot do this until she is a Citizen. At the present time Ursula is here in the United States on a visitor’s working visa which has been extended to the limit. Her studio, RKO, is working frantically to secure her permanent stay in the United States before this visa runs out in June. They may have succeeded by the time you read this. But if these efforts do not succeed, Ursula will have to return to Hamburg for a time. Naturally enough, she does not feel free herself to consider a marriage, even if Bob were completely ready for it.

“We have much in common,” Ursula says, “and we enjoy each other’s company very much. But that is never enough for Hollywood gossips. They have always got to push you into something—a marriage, a divorce, a new romance—before it is time for it to happen. There are times in life when things aren’t happening, when it is better to go along quietly, taking care of one problem at a time instead of making everything complicated.

“That’s how it is now. I have to worry about my citizenship, about my family in Hamburg, about my career and how much money it will cost to bring my family here with me.”

During the waiting period while Ursula is getting her family affairs in order and clarifying her status as a Citizen, Bob has occasionally been seen with Barbara Stanwyck. Each time Hollywood has hinted the possibility of reconciliation, but both Bob and Barbara have denied it and stuck to the “just friends” theme. “There has been no talk of remarriage,” said Barbara. Naturally Ursula does not feel free to discuss Bob’s dates with Barbara or with others; Ursula feels this is none of her business.

“One of the most wonderful things about Bob is that he isn’t a worry to me,” says Ursula. “But if I stay home—which I love to do—they write that I’m moping over Bob. And if we go out, they write that we’re sitting on each other in public. Bob won’t even talk to anyone about it any more, but I know it would make him feel good if someone wrote the truth.”