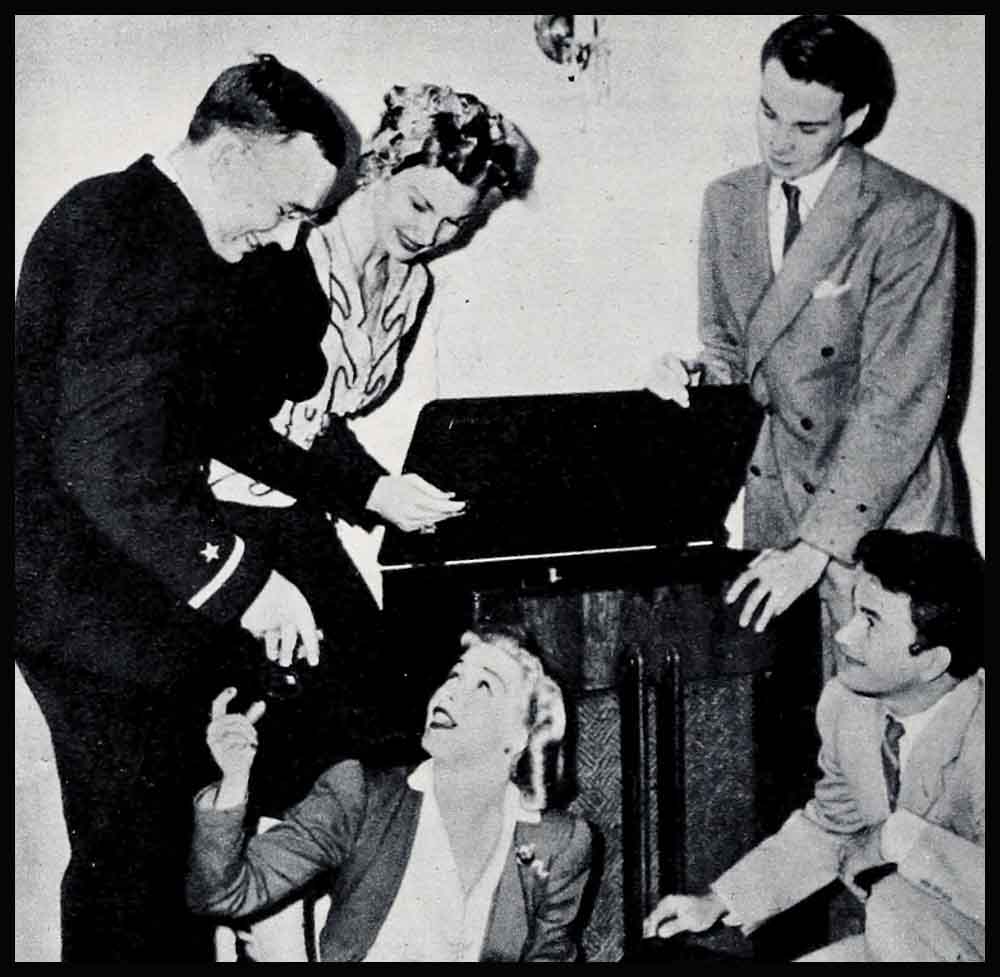 Ciro Diners: The pretty and practical car-checker Mildred at smart Ciro’s night club on the Sunset Strip is just about to Iocate Producer Felix Jackson’s car so he can drive Deanna Durbin homeward after a late dinner. At the end of a day’s work together (their latest picture being “Can’t Help Singing”—he’s the producer, she’s the star), Deanna sheds her movie costume for a simple black outfit plus a mink coat—and they dine together. But only on a Saturday night would they celebrate dinner by going to Ciro’s to eat in time to the magic of music.

Shop-talk: This Saturday-night huddle in the M-G-M commissary looks like fun—and is, but not in the way you’d expect. Saturday nights the studio—on request—-runs off a picture for the kids on the lot to analyze and study. Here Bruce Kellogg, Robert Walker, June Allyson and Robert Nathan have a happy bull session after having seen the new Judy Garland-Robert Walker picture, “The Clock,” in an M-G-M projection room. Author Nathan (who wrote the best-selling book, “Portrait Of Jenny”) has a personal interest in the picture because he wrote the screenplay; Bob Walker has a personal interest in June because he and she are about to start shooting “Her Highness And The Bell Boy.” Bruce Kellogg, who is in “Hold High the Torch,” adds to the scuttlebutt on general principles.

Record Fans: Saturday finds Bonita Granville running around Universal Studios inviting her favorite Universal actors over for a simple buffet-dinner-and-record party at her nearby Valley home . . . and here they are choosing from Bonita’s big record collection. There are Ensign Charles Runyon, Mrs. Noah Beery Jr., Dean Harens, Bonita herself and Noah Beery Jr. They’re all fresh off some set, refreshed after Bonita’s wonderful spaghetti dinner and are about to spend another hour listening to records before wending their homeward ways.

Dance Devotees: Saturday night finds love in high gear at Mocambo with Lana Turner and Turhan Bey dancing only with each other. Tonight Lana looks like an American version of a Turkish harem girl with nose-veil, sleek black satin suit and pounds of jewelry. The Turkish Mr. Bey matches her with gold-and-onyx cuff-links, ring and tie-pin.

Music-maker: Ida Lupino is home alone writing a song. Right now you can bet on her being unhappy—for she only composes when she’s blue. She’s already written the lyrics—with Nick Arden authoring the music—to such tunes as “When Our Fingers Meet,” “Leave Me Alone” and “Storm In My Heart.” Typical Lupino touch: She uses a fountain pen—instead of the proverbial chewed pencil of genius!

Pen Pal: The clock strikes 11:30 and it finds Maureen O’Hara covering reams of notepaper (marked Mrs. Will Price) to her husband in the Pacific—mostly about their tiny daughter Bronwyn Briget.

Movie Fans: Saturday nights are the Coopers’ only night to howl—and they howl very quietly, at that. Generally 11:30 catches them leaving a neighborhood theater. Here Gary and his stunning Sandra have just seen “The Woman In The Window” at the Village Theater in Westwood.