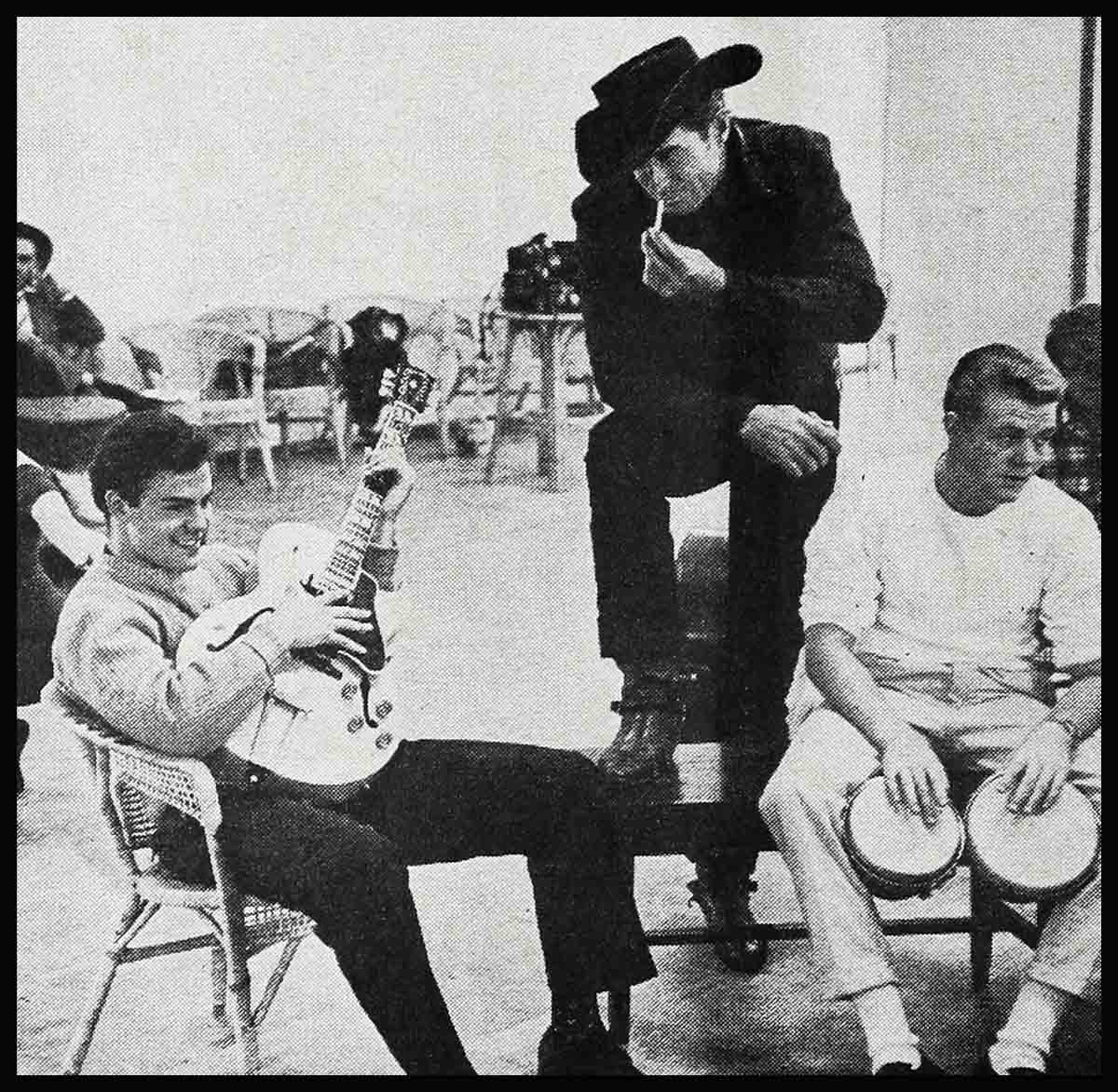 Those Debbie and Eddie Fisher whispers circulating are for several reasons: 1. Rumors have them on-the-verge; 2. reports that they never spoke at the Dean Martin surprise party; 3. talk that Debbie’s record of “Tammy,” which sold half a million, outshone her husband unflatteringly; 4. Debbie left Eddie flat in Europe to fly home. pack up and move out, and 5. that stern edict of no more joint marriage stories.

So, here’s the inside. Like most married couples, they spat, and probably did the night of the Martin party. Only with the Fishers, everybody knows it and everybody gossips. Eddie is proud as punch over Debbie’s recording success, Eddie did stay behind in Europe for two reasons: To sing at the Monte Carlo Red Cross benefit and to fly the same evening to Casablanca for a Bob Hope TV show. Debbie, homesick for Carrie, skipped the rugged schedule and flew home. And, incidentally, Eddie was a big hit with Princess Grace and Rainier, who flew from Switzerland to Monte Carlo for the benefit. After Eddie’s special song, “Philadelphia,” he was invited to the royal table and toasted with champagne by the royal couple, who ignored Van Johnson, Joan Fontaine, Henry Fonda and other stars.

The “no joint marriage” stories edict was prompted by Eddie’s own TV sponsors, who feel his private and professional life should remain apart. Pleases the fans more, they feel.

Kenneth More, who wasn’t considered good-looking enough for movies for almost ten years, is today one of the most brilliant British actors. Currently seen in “Reach for the Sky,” as Douglas Bader, wartime flyer who lost both legs in an accident during World War II, Kenneth won favorable American attention in the movie comedy “Genevieve.” His first American movie commitment will be 20th’s “The Sheriff of Fractured Jaw,” an outdoor feature to be shot in Canada and Hollywood. “I’m also appearing now with one of your unusually clever American players, Betsy Drake, in ‘Next Time to No Time,’ so I feel I’m taking first steps toward Hollywood,” says Kenneth, who has been called the British Spencer Tracy. Ken has also been seen here in “The Deep Blue Sea,” and “Doctor in the House.” We predict American stardom for Kenneth More.

Romances: June, 1959, is the wedding date set by Robert Wagner and Natalie Wood. After a slight tiff following their Big Announcement, Natalie and Bob appeared at producer Dave Weisbart’s party aglow with happiness, chatting away with a local furrier about a new black mist mink coat Natalie simply had to have. “I’ve always had to borrow furs from the studio,” Natalie complained. “Now I want my own.” . . . Next to movie stars themselves, glamour girls seem to prefer men of music. Two weddings in the offing prove it. Julie London and composer-arranger Bobby Troup, and Anne Francis and composer-arranger Buddy Bregman . . . And Lee Ann Remick, twenty-one-year-old New Yorker who turned critics’ heads in “A Face in the Crowd,” played another major role when she exchanged vows recently with TV director Arthur Colleran . . . They say Rita Hayworth, who’s been linked producer Jim Hill, is on a real outdoor health kick lately. Rita and Jim meet almost daily for golf, and are on “health food” diets. Hollywood’s marriage possibilities—number four for the glamorous redhead. . . . Actress Tami Conner, 19, who just completed her role in “Peyton Place,” was wed to Paul O’Keeffe, Jr. . . . Tommy Sands and Molly Bee making Hollywood openings these nights . . . Jenny Lindstrom, Ingrid’s daughter, still denies engagement to Franco Rossellini.

Readin’: “The Hills of Beverly” is the most widely discussed book in Hollywood today. Authoress Libbie Block, wife of movie producer Pat Duggan, paints a quaintly dreadful picture of movietown, peopled with knavish producers, crooked agents and their wives. Miss Block states the servants in these Hills of Beverly only stay long enough in one family to learn all they can and then pass on to fresh entertainment with another family (no cover charge, of course). The book claims that most starlets only want fine clothes to wear to elegant parties, and not the careers they thought they wanted. Well, Miss Block must know a different brand of starlet. The ones we know are so ambition-ridden they fairly spit celluloid. But the town is having a wonderful time trying to identify the characters.

Writin’: Three biographies eagerly awaited are those of Jolie Gabor (mother of Eva, Magda and Zsa Zsa), Linda Christian (Ty Power’s ex), and ageless Errol Flynn. Errol’s friends say he carries a pocket recorder and makes entries as his busy schedule permits. Lucky Linda has been loaned the splendid Cannes, France, villa of Aly Khan. Aly dislikes the Riviera during the busy season, so vacationed at Deauville, leaving his Chateau de l’Horizon to longtime friend Linda for as long as she wishes, to complete her memoirs. If the would-be authors and authoresses only tell all—or even some—what reading their books will be!

Prediction: Our money is on Dolores Michaels, the ash blond, blue-eyed actress who clicked in “The Wayward Bus,” “Time Limit” and “April Love.” Kansas City born, Dolores followed her star to New York and later to Hollywood, where, with very little experience, she charmed the bosses at 20th with her talent. Even Elia Kazan. the director everyone wants to work for, summoned Dolores for a two-hour “getting to know you” interview. Weekends, she lives with her husband, Maurice Martiné, an interior designer, in Laguna Beach. Workdays, she lives with her parents in Hollywood. And seven days a week she’s climbing higher toward stardom. . . . Two other interesting newcomers are Andra Martin and Judy Meredith. Andra has the second feminine lead in “The Lady Takes a Flyer,” and stars in “The Big Beat.” Judy stars in “Summer Love.” More about them in future issues.