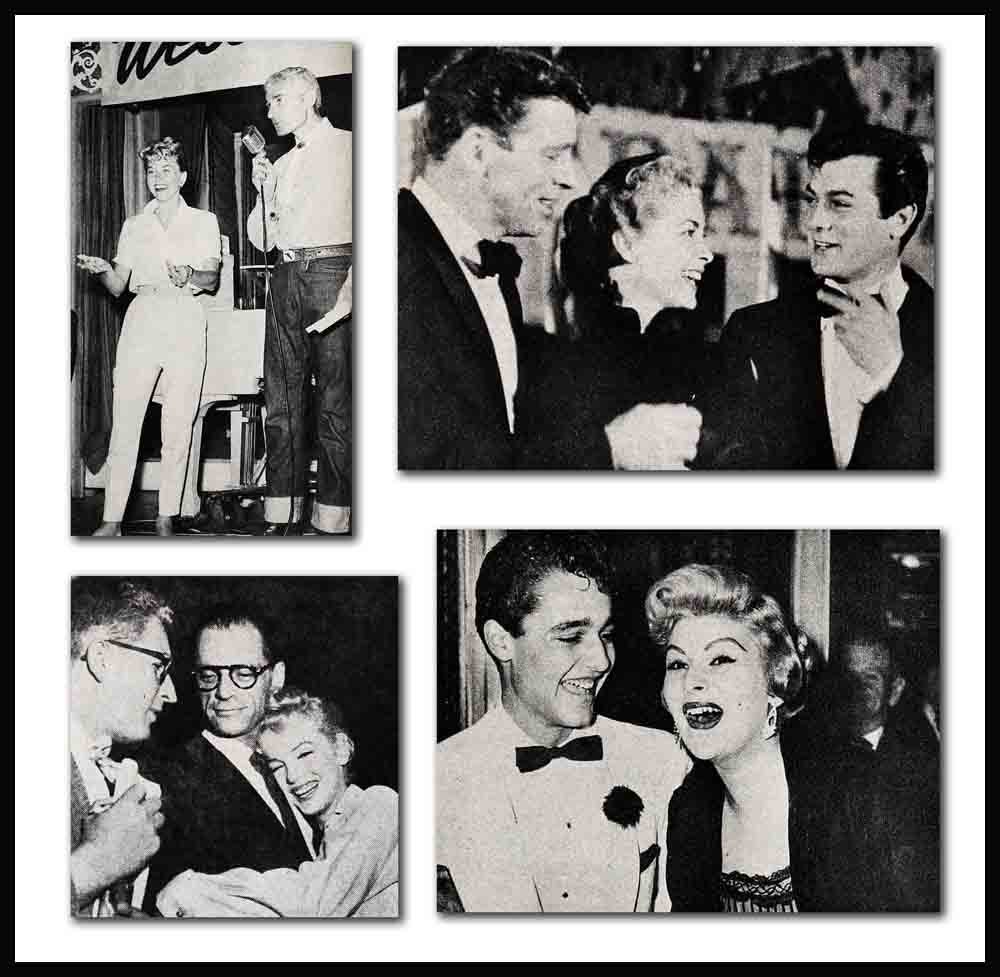 They’re Either Too Young Or Too Old: Someone goofed when it was itemed that Twentieth Century-Fox was fuming about Robert Wagner’s dates with Nora Eddington Flynn Haymes. The reason, supposedly, was because Nora is older than Bob, and too sophisticated. “Baloney!” muses R.J. “My studio tells me what to do in front of the camera, but away from it—I’m on my own!” . . . It didn’t take Marlon Brando long to realize he was back in Hollywood. When he returned from Japan, where he was making “The Teahouse of the August Moon,” he checked into the Chateau Marmont and occupied Greta Garbo’s old apartment. Marlon unpacked, then went out to lie in the sun. Natalie Wood happened to be by the pool, visiting friends, and she and Marlon exchanged a few words. The next morning, a local columnist listed the pair as “the hottest romance in town!” So far, Nat and Marlon aren’t even lukewarm!

News And Views: Luscious Kim Novak took Europe by storm and vice versa. But back in the States, her boyfriend Mac Krim received an awful ribbing when Kim announced that she loved having her hand kissed by the countless counts—especially Count Bandini—who pursued her! . . . In Fairmount, Indiana, James Dean’s family and friends beat Hollywood to the punch. They announced the establishment of a Foundation Memorial, which will provide financial assistance to young professional artists of proven ability. We hope Jimmy’s warm heart knows, for he was always doing the same thing when he was still with us. . . . Doris Day was just taking off to plug her latest picture, “Julie,” made by her own company, when she had to be rushed to the hospital. It was a king-size relief for the Marty Melchers when only minor surgery was necessary for Dodo. . . . Blond and bosomy Jayne Mansfield, who has her own way of busting into print, had her close-to-exposed heart set on playing the life story of Jean Harlow. But Jayne is due for a big disappointment. Another famous blond named Marilyn Monroe will play the part, after she finishes “The Sleeping Prince” in England, with Sir Laurence Olivier—and has some time off for a honeymoon with playwright Arthur Miller.

Change Of Heart: When they changed the title of “The Maverick” to “Three Violent People,” it was rather ironic. For some unexplained reason, Charlton Heston didn’t want tall, handsome Tom Tryon in the picture hen, too, Anne Baxter rarely spoke to any of the cast when they were not on-camera. Eventually, however, Heston was so impressed with Tryon’s death scene, he fought to get Tom close-ups. Then, to top it off, Annie had a change of heart. It all ended up, as the saying goes, “just one big happy family!”

Stranger In Town: Hollywood needed the talents of Don Murray, who plays Marilyn Monroe’s impetuous cowboy lover in “Bus Stop.” A forceful type who worked with religious groups during the war years, Don now has an ideal set-up with Twentieth: two pictures a year, with time in between to do plays. He recently married Hope Lange, who is also in “Bus Stop”—“but it took her five years to say yes!” Don loves Hollywood and is touched by everyone’s eagerness to help him. Between his lusty film scenes with Marilyn, he could always be found, engrossed in a reed-covered book. Curious, La Monroe asked him the title. “The Bible,” Don replied.

Fateful Decision: Personable Pat Wayne hasn’t lost his urge to join the priesthood. However, he’s only sixteen, and it’s such a serious step his wise parents are glad that he’s delaying his final decision. In the meantime, here’s he lowdown on Pat’s new contract with C. V. Whitney, who produced “The Searchers.” It permits him to choose leading ladies and okay scripts, provides that his acting chores won’t interfere with his studies at Loyola College, and allows for time off for football practice. The brain who agented the deal? Pat’s proud pop, John Wayne!

Last Laugh: On Rock Hudson, an unhappy face isn’t becoming. But he smiled again when U-I loaned him to M-G-M for “Something of Value.” Dissatisfied with recent roles on his home lot, Rock and his Phyllis made plans for their African jaunt with igh glee. Phyllis left before Rock and stopped off to see her family in Montevideo, Minnesota. Rock followed a few days later and, he confesses, “shook in my boots” over the prospect of meeting his new relatives. He tried to sneak into town quietly, but the entire population turned out to greet him. Did the relatives like him? Foolish question.

Great Expectations: The Eddie Fishers plan to buy or build in Beverly Hills, so we predict that his TV show will emanate from Hollywood. While making “Bundle of Joy” at RKO, commuting to Santa Monica proved to be too rough on Debbie, so she and Eddie lived in a studio dressing-room suite. Eddie loved riding his bicycle around the lot late at night when the studio was still, but expectant Debbie was “grounded” for the duration.

Romance, Hollywood Style: “My whole life is going to change in the near future,” Marilyn Monroe told Bob Wagner when she sold him her big black Cadillac. What she meant was that she was planning to marry Arthur Miller—which she did, no less than twice, on June 29 and July 1. For days, they had been haunted by the press but, true to their word, they tied the knot in private—much to all the news- hounds’ extreme chagrin. . . . Tab Hunter and Lori Nelson have been dating everyone but each other for a year. So now it’s been announced that they’ve decided “to call the whole thing off!”

Father’s Daze: Nurses in the maternity ward didn’t know whether to kiss or kill Tony Curtis. Every morning at 6 a.m. the new daddy arrived at the hospital, before going on to work. His face pressed against the glass enclosure, Tony swallowed baseballs as he watched his new-born daughter, Kelly Lee. “Doesn’t my daughter look a little like Winston Churchill?” beaming Tony kidded a nurse. “They all look like Churchill at first!” she answered.

Behind The Smile: Marlon Brando wore a weird set of uppers and lowers for his role in “Viva Zapata!”, and he repeats the act as the Oriental in “Teahouse of the August Moon.” Smiling grimly through the false network, Marlon mused: “And I’m the one who spent a small fortune to make my own teeth photographic!”

Silent Prayer: Clark Gable, ideally happy for the first time since Carole Lombard died, took an adjoining room when his beautiful wife Kay was hospitalized with a heart condition. Clark is so devoted to Kay’s two children by her previous marriage, he’d love to adopt them. “Kay is my life,” Clark says simply.

Wishful Thinking: Barbara Stanwyck’s friends—and she’s got a million of ’em—hope she and Sterling Hayden become more than a screen team while making “Love Story.” Sterling’s done a miraculous job raising his four, children; Barbara’s lonely, her warm heart overflows with love—and they all need each other.

Rover Boys: Martin without Lewis is like Sears without Roebuck! Everyone had a different version of the boys’ professional parting, but producer Hal Wallis, who holds their contract, insists it’s only for one picture. We know that ambitious Jerry likes to work fifty-two weeks a year, while Dean likes to work less, play golf more and live longer. In union there is strength. Abbott and Costello learned their lesson the time they split up. Both Martin and Lewis are terrifically talented, but “Pardners” belong together.

It’s The Woman Who Pays: Anita Ekberg and Joan Collins know it’s the woman who pays, but for different reasons. Honeymooning in Florence with actor Anthony Steel, who couldn’t get any lire, Anita had to shell out for most of the hotel bill with good old American dollars that are good anywhere! . . . It cost British-born Joan Collins $6750 for the privilege of divorcing actor Maxwell Reed. Originally the handsome fellow had requested $1250 a month alimony! . . . Jeff Richards had been married only five months when he and his school-teacher bride separated. Jeff has a strong jaw, which is why he isn’t talking about it to anyone. . . . On the other hand, Dale Robertson and Mary Murphy have been shouting their happiness to the world at long last. Their on-again, off-again romance floundered for five years before finally leading them to the altar!

Cling, But Don’t Clutch: Note to Hollywood glamour gals who have failed to latch on to handsome Richard Egan. He doesn’t like possessive women—another reason why Pat Hardy has been his number one date. . . . When Gene Nelson walked into an NBC party, Helen Wescott was on his arm. Later, when Ben Cooper kept cutting in, Gene switched over to Lori Nelson. Personal to Piper Laurie: Where were you?

Down Lullaby Lane: The excited Gregory Pecks managed to keep their secret for four months. But when they announced the stork was on its way, champagne corks popped like the Fourth of July. . . . Fortunately for the Robert Stacks, they hadn’t yet okayed blueprints for their new house when Sir Stork sent his calling card. Now a nursery has been added to the house plans.

Stranger Than Fiction: In this case there’s fire, but no smoke! Liz Taylor was suffering from sinus, and Monty Clift was convalescing from his serious auto accident. So Michael Wilding packed them off to Carmel for a change of scenery. No one raised an eyebrow or said a word. Hollywood, we thinks, is mellowing!

It is a quote. PHOTOPLAY MAGAZINE SEPTEMBER 1956