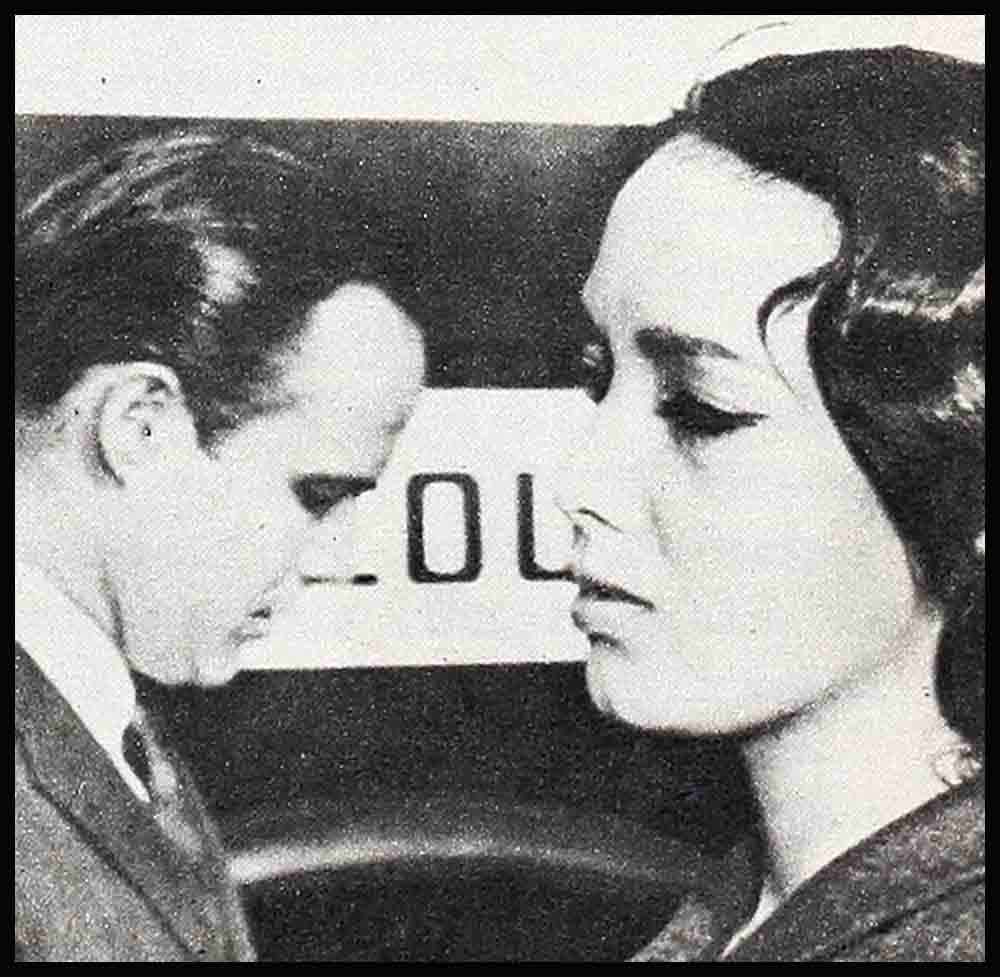 Editor’s Note: Anna Kashfi’s battles—in and out of court—with her ex-husband Marlon Brando have made headlines around the world. What is really behind this gigantic tug-of-war over their young son, Christian Devi Brando? Here, tor the first time in any magazine, is Anna’s own story about the conflict, told exclusively tor PHOTOPLAY.

Marlon Brando has tried to drive me crazy. If it were not for Devi, he might have succeeded. Because terror is a potent abrasive. It wears away health, peace of mind and eventually, I suppose, sanity.

“But my son—our son, Devi—must have a mother who is calm and emotionally stable. So I will not give in to the fear. I will fight back—for Devi’s sake. He must grow up a happy, normal boy.

“Fear is a poor substitute for a husband, but it supplanted mine even before Marlon and I were separated. I became wedded to fear the night I saw the man with the knife trying to break into my room. I have lived with it ever since.

“While still hardly more than a bride, I was left alone in our big secluded house for days and nights, too. Strange sounds and disturbing shadows were my only companions. Marlon had a habit of disappearing—without a word—for weeks at a time. He never called or wrote, and I only knew where he was if I read it in a column.

“His strange, unloving behavior made me so nervous and ill that more than one miscarriage resulted. But finally, happily, I was pregnant.

“Our house was almost all of glass and stood high on a hill with a single road leading to civilization. Alone at night I’d hear—or think I heard—crunching footsteps just outside.

“One night during my pregnancy I was alone as usual and ready for bed when I distinctly heard a prowler. ‘Where is Marlon?’ I frantically asked myself. The last time I saw him he was enroute to a story conference for ‘One-Eyed Jacks,’ on which he was so totally absorbed that first he’d come home late, then later, then not at all.

“This time I knew the footsteps were not imaginary. Stiff with fright, I sensed the presence of a dangerous intruder. wrapped in my robe, I investigated. And discovered a man with a long knife lurking at my window! Cutting the screen!

“I screamed and I screamed—and the prowler ran. Shaken, I called the police. They found evidence that a man had been there, but that was all. Later—much later—my husband came home.

“I wasn’t very pretty at the time, I’m sure, because I was pregnant and I had been sick with fright. I didn’t inspire any rush of sympathy from Marlon. When I told him of the intruder with the knife, he looked at me indifferently.”

“You seem to have been able to cope,” he said.

“Marlon had many ways that nearly drove me to distraction. He brought immoral people home, let them insult me. And his family didn’t like me, there were problems. . . . Our marriage had to end. I hoped the divorce would give me peace, but it only began Marlon’s campaign of harrassment.

“Maybe he is not responsible for all circumstances, since the divorce, that have combined to wreck my career, almost wreck my health and push me toward nervous collapse. I’m sure some of the troubles must have been unpleasant coincidences that fell in with his efforts to destroy me. I’d never accuse Marlon of having burglarized my home, for instance. But the burglary occurred at the time he was waging a determined attack on my nerves—just about when he informed the world he was going to have me put in jail.

“Let me explain: Since I divorced Marlon, I have never brought him into court for anything. But he has had me cited eleven times. When the doorbell rings, I always expect to face a process server carrying out some new legal maneuver for my former husband. I have even been threatened with jail as a part of our struggle over Devi.

“When Marlon and I were divorced, the court gave him visitation rights, of which he has taken advantage in a way no conscientious mother could tolerate. Strangers appear at my door and tell me they have come from Mr. Brando to get his son. Sometimes a woman says she is a maid. Sometimes a man says he is a chauffeur. I don’t know these people. I can’t turn my baby over to strangers! And if Marlon cares deeply about seeing his son, he could at least come and get him in person.

“In January a man I had never seen called for Devi. He said Mr. Brando had sent him. I refused Ito let him have my child. . . . Marlon didn’t call me to discuss the matter at all. He just sent a process server with a subpoena. He wanted me jailed for contempt of court—as he told everyone except me—because I had deprived him of his legal rights to see his little son.

“When Marlon has the baby, I worry. Maybe he is a doting father, by his lights. But I remember how he came to get him once when Devi had a bad cold. I told Marlon, begged him to keep our child quiet. Marlon took him to a circus and brought him back to me with 104° fever.

“Further, I remember the people who came to our house when we were married, and I dread the atmosphere into which Devi may be taken.

“Marlon has sworn that he and Movita are married. I don’t know whether they are or not. I know they don’t live together—but Marlon isn’t an orthodox person and this doesn’t prove anything one way or another. However, I do know I’d never want Movita to care for my child. I have nothing against her personally because I don’t know her, but I don’t think she and Marlon would provide the right atmosphere for a little boy.

“Marlon has preyed on my nerves and emotions with many weapons. When my telephone rings, never know what to expect. Recently—after he’d sworn he was married to Movita—he called me for dates. He has asked me to go to dinner. To Tahiti. Last time I asked, ‘What will your wife and your girl friends think?’ He mumbled some answer.

“These are the calls for which Marlon can be held accountable. But I get others— frightening calls that can’t be traced to him. Once a voice said, ‘We are coming to get you and the baby.’ Was this Marlon’s doing?. . . In the middle of the night I get open-end calls. The phone rings. . . I answer. No one speaks. But on the other end you hear someone breathing. . . . When this happens every fifteen minutes—all night—it’s devastating. I have an unlisted phone. Marlon is one of the few who has the number. Is this his doing? . . . My house has been burglarized while Devi and I slept on, mercifully. Had we awakened—I wonder what might have happened. . . . And once I came home to find the house door wide open and two furtive characters in a car . . . waiting . . . ‘looking for the house of Frank Sinatra’—who lived nowhere near. ‘Could Marlon have been responsible for this?’ I kept wondering all that night. ‘I can’t stand this sort of thing very much longer.’

“But I know that I must stand anything that happens, for Devi’s sake. I have two ambitions. The first and most important is to be the best mother I can for Devi—to give him a home where he can be happy and normal. Marlon Brando’s son will have a difficult time at best being an average boy. But I spank Devi’s bottom when he needs it. I kiss him often, I send him to a nursery school where he won’t be ‘special’—just average.

“My second ambition is to resume my acting career. I can’t prove Marlon has a hand in my inability to get a job. But I was under contract to one of the biggest studios until I announced my divorce—and then I lost the contract. From then on I haven’t gotten a part in Hollywood. I get scripts from Rome and Spain and other parts of the world, but nothing in this country. Can it be that Marlon hopes I’ll be tempted to leave the country—leaving Devi here? If he believes this, he doesn’t know me at all. . . . I don’t intend to be unfair to Marlon. I’d like Devi to have a father he could love and respect. But Devi’s father is a lonely and tormented man. He must be—or he couldn’t make those around him so miserable. I feel sorry that he is unhappy, but I don’t want Devi to be unhappy too. That’s why I’m determined to withstand anything Marlon may do to try to hurt me in this struggle.

“I doubt that Marlon would be happy even if he had everything his own way. But if his bid for happiness is to be balanced against his son’s, I’m totally committed to one side. Devi’s.’’

—as told to NANCY ANDERSON.