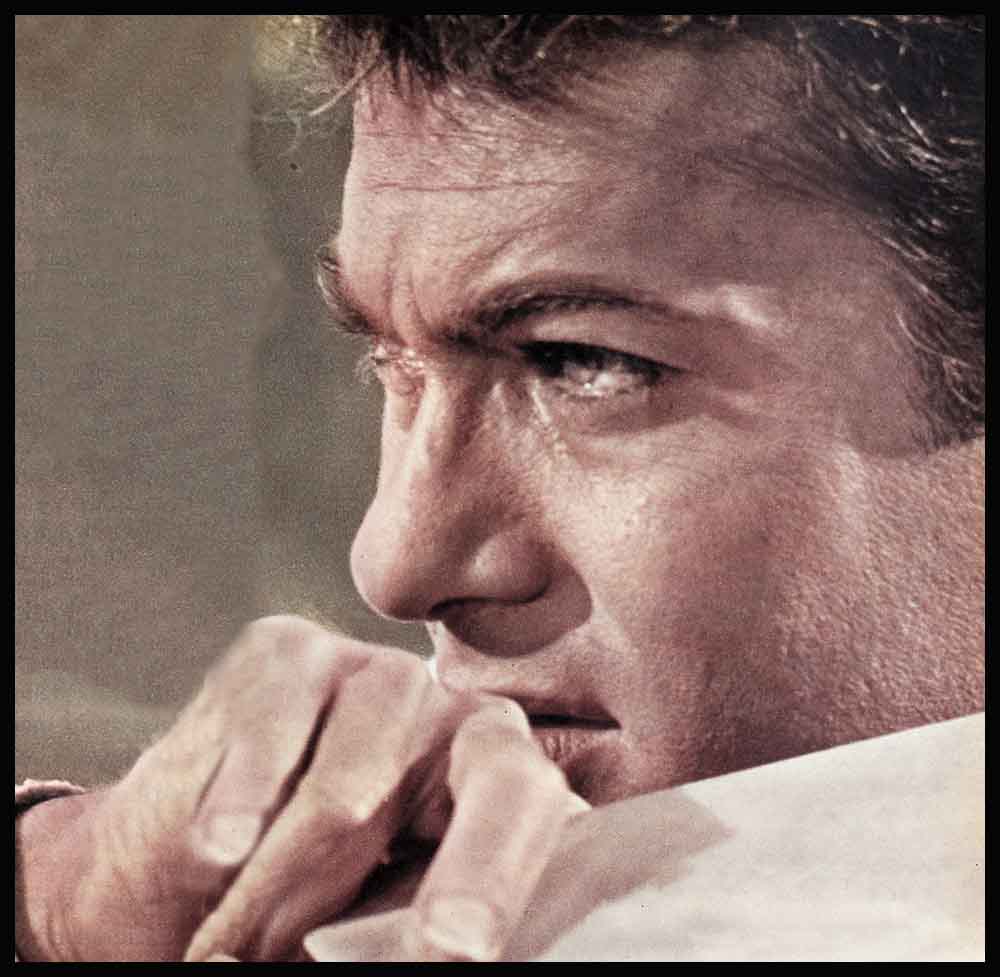 Tony Curtis: “The Day I Nearly Lost Her”

(Editor’s Note: This touching story, never before told, was written before Tony and Janet’s break-up—a break-up we hope will be a reconciliation by the time you read this. And after you’ve read it, you will understand why it is so important that Tony and Janet patch up their differences. As for the cause of the separation, click for Janet’s own intimate story: “Janet Leigh’s Own Story”)

When Tony and Janet tossed a party for Miss Kelly Lee Curtis, is was a dilly.

Nothing is more fun than a birthday party in the backyard on a warm, sunny afternoon—whether the backyard is in Philadelphia or Cleveland or Beverly Hills. A birthday party is a birthday party whether your daddy is a hardware merchant, a car dealer or a big movie star. . . or whether your mommie is a housewife, a secretary or a big movie star, too. And this particular party was a party to end ali parties. Even the parents who had brought their kids were laughing. Dean Martin was laughing. It’s not unusual for Dean to laugh. Lots of people have seen him laugh. But Dean gets most of his laughs at night. And Kirk Douglas, always so serious in the movies. No one can show more pain than Kirk. Remember those lashes in “Spartacus”? But Kirk was laughing, too. Maybe it was something Dean said. Maybe it was because the kids were laughing so hard at Tony blowing up balloons. If they didn’t explode in his face, they flew out of his mouth.

No one knew what they were laughing at. Once it was when Dean started eating ice cream and cake. That’s pretty funny.

The kids played games and laughed some more. The noise was deafening, but no one seemed to mind.

“Sounds like supper time at my house,” quipped Dean. “Every meal is like the mess call at Boys’ Town.”

Dean is father of seven, you know.

Tony, fast-talking, stopped and reflected for a minute. Perhaps he thought of Bernie Schwartz who spend his childhood in a cold-water flat in the Bronx. Did he have a birthday party when he was a kid?

He probably did because his parents, though poor, were rich in love. But he never had a birthday party like this— that’s for certain.

Perhaps his eye swept the Curtis backyard. Bernie Schwartz, child of the city streets, had come a long way. He was Tony Curtis now, a movie star, one of the Golden Dozen.

The Golden Dozen—a charmed circle of the big money-makers in the movie industry.

That stature had brought him all this . . . his huge mansion filled with thousands of dollars worth of original paintings . . . his Rolls-Royce parked in the driveway and his huge backyard which is really too big, even by Beverly Hills standards, to be called a backyard. It’s practically a football field when measured from its highest point—where the party was held—down to the pool and pool-house area.

Tony could have been thinking about all this when he reflected a moment from the party’s gaiety.

It was only a moment, but in that brief instant his eyes flashed, as they always did, toward the pool. It’s a big pool, almost Olympic size, and very deep.

Tony had of ten thought about the pool—a luxury one is almost forced to have. They’re getting as common as patios in Southern California. But they can be a nuisance, too. Especially on a day when there are lots of kids around whooping it up at a birthday party.

Kids too little to know how to swim.

Tony laughed and joked with the others but. somehow, he couldn’t relax. His nervous, quick glances, so familiar to moviegoers, kept reverting to the pool area. No one was there, but he kept looking.

It was fun—a barrel of fun for the kids and their parents. But Tony was on edge. He must have sensed that if anything were to happen to mar their perfect afternoon—any tragedy or near-tragedy—it would come from the pool. Anyone who owns a pool has a kind of built-in sixth sense, especially when someone is present who can’t swim. And Tony is no different.

Or perhaps he remembered all too clearly the tragedy of Lou Costello. How often he had heard Lou, now gone, talk about the pool tragedy at his home—the time little Lou, Jr., the only boy in the Costello family, had toddled to his death in the family pool.

“It only took a second—just one second of forgetfulness,” Lou had lamented for the rest of his life. Everyone who knew Lou had heard that lament.

Maybe this is what Tony was thinking about as he chatted with Kirk and Dean. Who knows but Tony?

And as they talked, Tony watched the pool. Suddenly, his voice stopped in mid-sentence. There was a ripple in the pool. Nothing more was visible, just a ripple. He didn’t stop to think. He ran. He ran full-speed like a college halfback out-racing his pursuers to the goal line. When be reached the pool, be jumped in—clothes and all.

So frantic was Tony’s dash, so terrifying the look on his lace, that Kirk Douglas, strictly on a father’s impulse, followed him into the pool, clothes and all, to help.

But Tony’s quick, expert-like dive had him already above water with his arms filled before Kirk could halt his dive.

A hush fell over the party. Not all had seen Tony’s mad dash, nor Kirk’s either. Janet had and she was at poolside.

As Tony handed the tiny armful over to Janet, they both realized that it was their Jamie who had fallen into the pool—and hadn’t come up.

“Tony turned white when he realized it was his own child. He could only say: ‘God must have nudged me.’ ”

And indeed God had, for little Jamie had barely fallen in when her father pulled her to safety—red and soaking, but otherwise none the worse for the experience.

“There was no one in the pool,” Janet recalls. “Suddenly, I saw Tony cry in amazement. ‘What’s that ripple there?’

“At that he raced like I’ve never seen him race and dived into the pool clothes and all. He didn’t know who had fallen in—or if anyone had fallen in. He just saw a suspicious ripple that made him act on instinct. Can you imagine how he must have felt when he went under and found his own child there? He turned white. I’ve never seen him so shocked.”

It was a miracle

Tony had performed a heroic deed, but as he put it: “It was more miraculous than heroic. You don’t have to be heroic to pull a small child out of a swimming pool. You just have to be fortunate enough to get there in time. Thank God I did.

“I’m not trying to sound humble. I’m just trying to he grateful to God who must have made me run down that hill and dive into the pool. I didn’t see anything but a ripple.

“If I had stopped to think, I might have been too late. I hate to think about it.”

But he did do some serious thinking after the shock wore off. I found out about it when I went to visit the Curtises a few weeks after the incident occurred.

Janet asked if I minded talking down by the pool. As we chatted, I couldn’t help but notice the activity on the diving hoard. It was so unusual that I took my eyes away from the shapely Janet, who was wearing a bikini she had bought on the French Riviera!

There, on the diving board, was tiny Jamie. With her was a husky, athletic-type whom I immediately figured was a college boy earning extra money.

Jamie was on the edge of the hoard crying—but she knew she couldn’t turn back. The instructor was right behind her, kind but firm. Jamie, like all of her sex, must have sensed that there comes a time—and a person—when tears are useless, a point-of-no-return.

“Jamie,” prodded Janet, “you must listen to Gary. Do what he tells you. He’ll be watching you every minute. Remember what Daddy said.”

At these words, Jamie jumped off the deep end of the pool. She paddled, doggie-style, to the ladder and climbed up.

Once again Gary put her on the end of the board. Jamie cried some more, but off she went. Over and over the dive was repeated—so were the tears, but they diminished as the child gained confidence.

Unable to contain my curiosity, I asked Janet the reason for this relentless instruction, almost speed-up torture.

“Aren’t you afraid that you may instill a deathly fear of water in the child if you push her so hard?”

It was then that Janet told me the story of the birthday party.

“Tony called Gary, who taught Kelly to swim, and insisted that he make Jamie water-safe. That’s what he’s doing.”

When the lesson was over, Jamie took off her suit and walked over to her mother, the cutest little nudist you ever saw.

Janet wrapped a towel around her and held her close for several minutes.

“My little girl gets a cuddling for being such a good swimmer,” she murmured.

A happy picture to a story that—miraculously—had a happy ending. The newspapers never got the story—that’s the way Tony and Janet wanted it. But it’s a day in their lives that they’ll never be able to forget. Even now, whenever Tony thinks of Jamie’s close brush with death, he can’t help crying a little . . . crying inside.

See Tony in “The Outsider,” U-I, and Janet in “Manchurian Candidate” for UA.