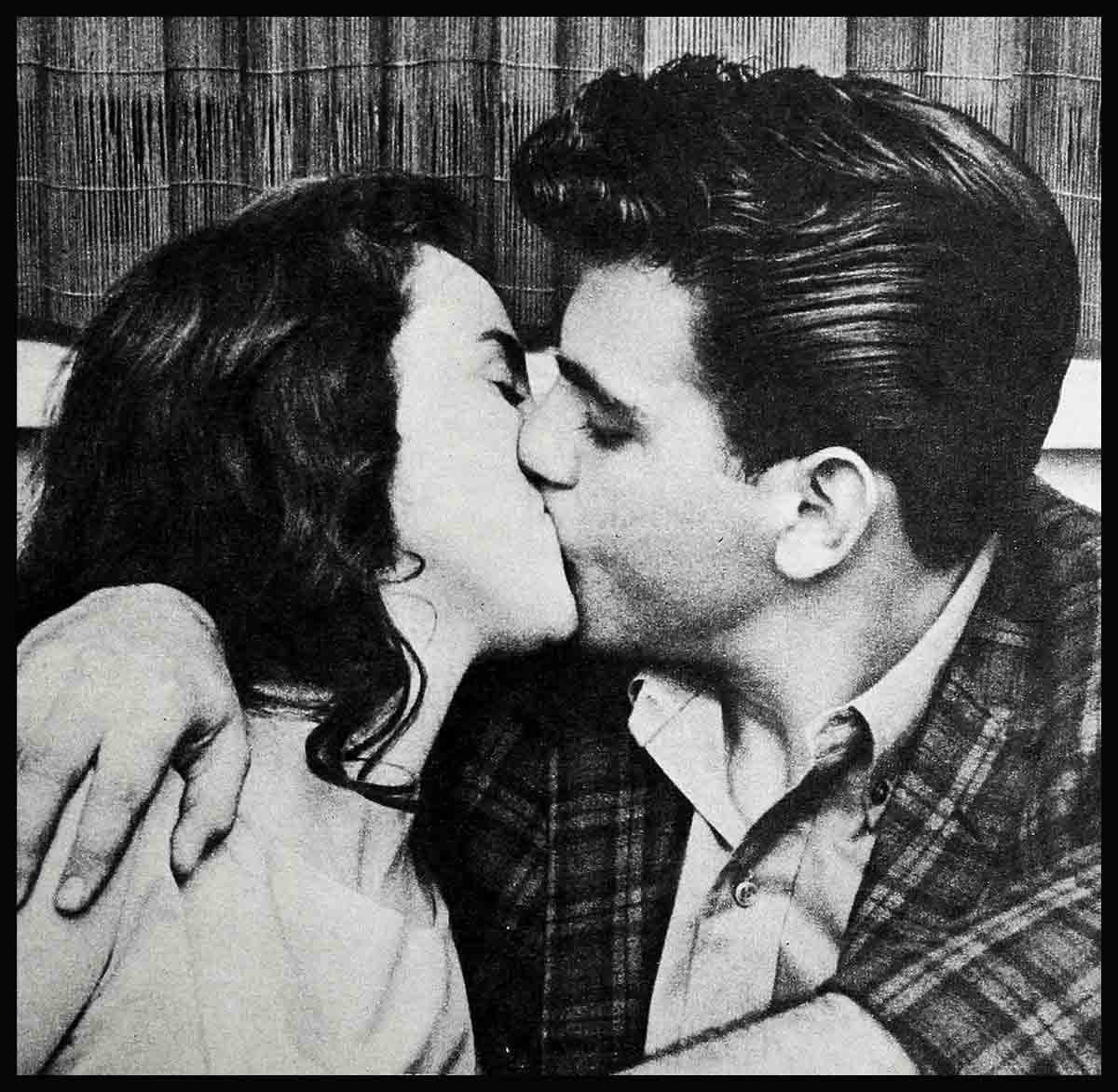 Fabian: “Man! This Was A Perfect Date”

It started out, I suppose, just like any date. I’d come to New York to do a TV film, but it was cancelled on account of rain. So I called up Marti Jewell (she studies with the same voice teacher as I do) and asked her out.

“I’d love to,” she said. No excuses, or pretending to be busy, even though it was past six o’clock and I told her I’d be by at seven. In the elevator, I remember wondering how long she’d keep me “parlorized,” but when she opened the door there was a smile on her face and a coat over her arm.

“Hello, Tiger,” she grinned as I helped her into it, “how do you feel?”

“And I’m so glad you’re glad,” she cut in gayly, tying a blue bandana under her chin.

Somehow, in the hall, we got talking about how I’m afraid of ghosts—I really am, you know—and she told me about the gremlins people still believe in where her folks come from in Ireland. So it must have been ten minutes before I noticed the elevator was out of order, and I felt pretty silly. But Marti joked about “elevator gremlins,” and by the time we’d walked down the six flights, we were giggling like a pair of idiots.

I was about to hail a taxi when I realized we had no destination. “Maybe a movie?” I thought out loud.

To my surprise, she bounced right back with “How about ‘Green Mansions?’ It’s at Loew’s—and we can get a bus at the corner that stops right there.”

On the Eighty-sixth Street crosstown, she saw an old man who looked to her like “a typical family doctor on a TV soap opera,” and we started guessing all the passengers’ professions—like on “What’s My Line?” and missed our stop by six blocks.

But luckily, when we finally got to the movie, there were still some seats in the first row of the balcony, and I got wrapped up in the story. Until that part when the sun went down over the jungle, where I reached for her hand and brought it over to my lap. Then, when it got real romantic, I leaned over and brushed her hair with my lips . . . and from then on I honestly don’t remember much about the picture, except that it got awfully sad. And Marti looked so cute when the house lights suddenly went on and caught her with wet eyes.

Later, over a hamburger, I found out she has a cousin at Harvard who’s been giving her a blow-by-blow description of every football game since he made the team. This fall he’ll be a senior, and she’s finally getting to go up and watch him help beat Princeton. (Boy, it’d be fun to see a big game with a girl who knows the score.)

We decided to walk home, the long way, around Riverside Drive. The rain had just stopped, the streets were shiny and the air smelled good. We didn’t talk much, so when we got to her front door and both of us started to speak at the same time, we laughed, and I thought she seemed a little nervous. So I looked at her real hard. And then she smiled—a long, slow smile—and I got the message. She didn’t want to say goodnight yet, either. So we went in and listened to records (Frankie’s, mostly) and she told me about some of the plays she’s always going to, and how she wants to get a job in summer stock after graduation next year.

After that, I forget what we talked about. Because the rain started up again, and we turned off the Vic, got kind of cozy in a corner and just listened to it beating on the roof.

And that’s all there was to it. Maybe it doesn’t sound like such a terrific date to you, but Marti’s one girl I sure will call again. . . .

WHILE WAITING FOR FABIAN’S MOVIE DEBUT IN TWENTIETH’S ADAPTATION OF “THE HOUND DOG MAN,” LISTEN TO “HOLD THAT TIGER!”—HIS LATEST HIT ALBUM FOR CHANCELLOR RECORDS.

It is a quote. PHOTOPLAY MAGAZINE AUGUST 1959