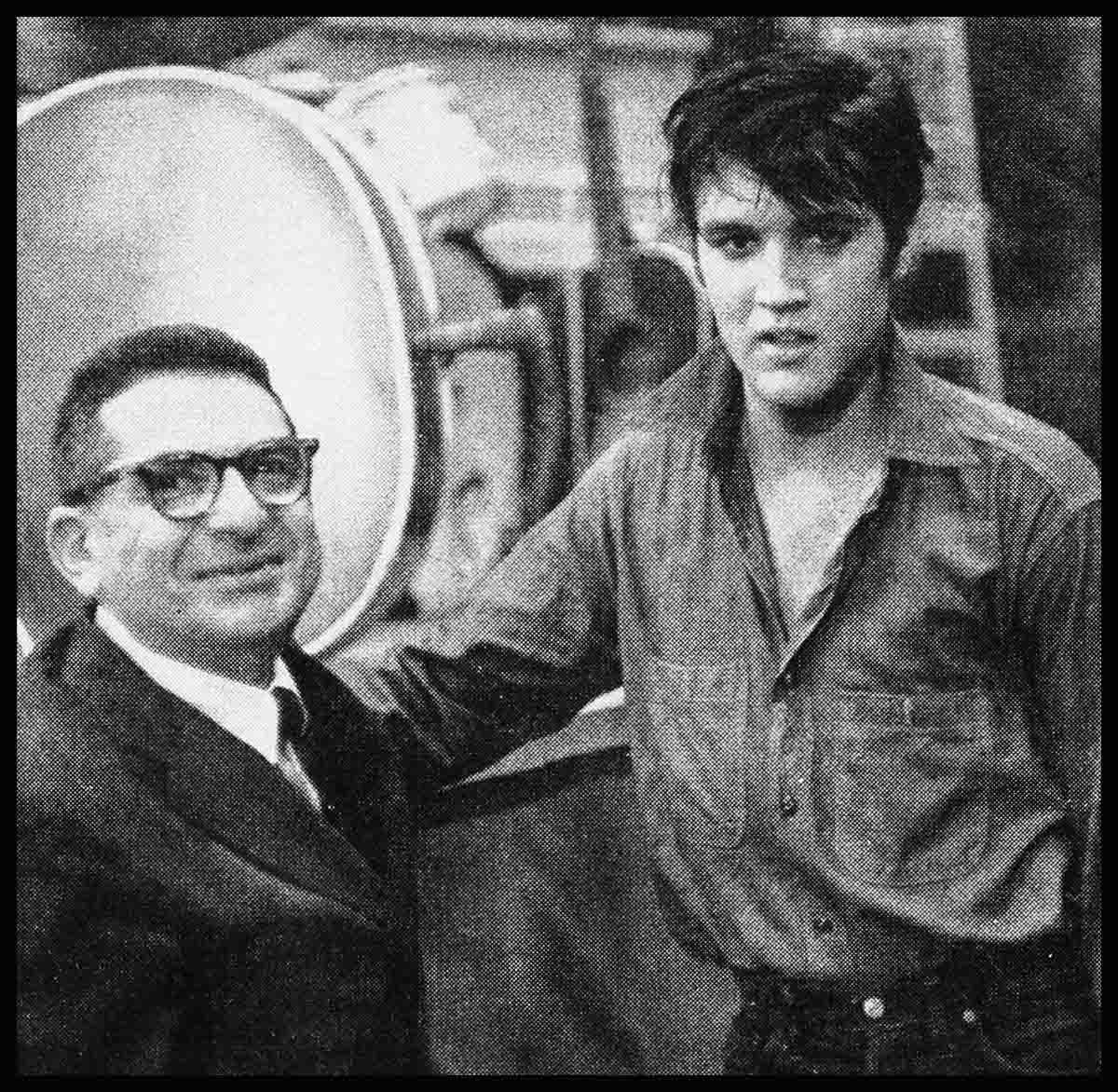 I’m partial to Joan Collins. As far as I’m concerned, she’s the best piece of lend-lease we’ve ever had from England. When Marlon Brando put on a tuxedo, it was the end of an era. And I wish those copy-cats in T-shirts would realize it. . . . After television, the worst thing that happened to the movies is the extra-large screen. It magnifies a face, destroying glamour, revealing everything. You can have Sophia, Gina, Anita, Kim and all the rest. Give me the French doll, Brigitte Bardot. She’s the sexiest female on celluloid, and it’s about time some Hollywood producer got wise. . . . Elvis Presley has a collection of over 200 Teddy bears. To let the lady (Deborah Kerr) have her say: “When my husband and I disagree, he walks around the garden a couple of times and I go to the bath room and take a hot tub.” . . . Why is it that most of the movies’ new faces look like the old faces? . . . Ever since Burt Lancaster played a columnist in “The Sweet Smell of Success.” he tries to behave like a columnist. . . . When Barbara Nichols was asked why her tight-tight toreador pants didn’t split, she answered: “They breathe with me.” . . . Tom Jenks argues that movies are not an art but a product and “Hollywood is an emotional Detroit.”

Peggy King is now strictly Peggy King. And not as interesting or moving as when Peggy King seemed like Judy Garland. . . . I didn’t recognize Carroll Baker (she’s back to brunette) at a party, until she put her thumb to her mouth. . . . Yul Brynner is honest. He can’t admire a “good” woman if that is the only recommendation she offers.

I’d say Jerry Lewis was funnier when he wasn’t so heavy, with weight and theories about comedy. . . . Don’t believe those romantic items you might read about Natalie Wood and Tab Hunter. Natalie and Tab try hard to be good friends. . . . I’d like Edward R. Murrow to Person to Person Mike Wallace and then have Mike Wallace interview Edward R. Murrow.

It could be, on second thought, that Elizabeth Taylor is only collecting data for a book, “Around Mike Todd in 80 Days.” . . . Boy, would I like to be unseen and overhear an evening’s dialogue between Shelley Winters and Tony Franciosa. I can hear you saying, “So would I!” . . . To let the lady (Monique Van Vooren) have her say: “I like to be glamorous at home, in bed, everywhere, not just in my act.” . . . The best and most beautiful musical since “Funny Face” is “Les Girls.” The girls are Kay Kendall, Taina Elg, Mitzi Gaynor. (Originally the girls were to be Leslie Caron, Cyd Charisse, Carol Haney.) After this released nation-wide, Kay Kendall will be more than Rex Harrison’s “Fair Lady”; she’ll be everybody’s. And Taina Elg joins the selective list of actresses who have “animal sex appeal.” . . . Remember when the movies had child stars like Shirley Temple, Jackie Coogan, Jackie Cooper, etc.? Now the movies have child stars who are accepted as men and women. Examples: Tommy Sands (nineteen), Natalie Wood (nineteen), Sal Mineo (eighteen). Susan Harrison (nineteen) etc. . . . Kathy Carlyle says a movie is reissued to give the people who missed it the first time a chance to miss it again. . . . Always late, Marilyn Monroe wishes people would set their clocks by her.

Hugh O’Brian as Wyatt Earp makes me giggle. . . . Isn’t it almost unbelievable now to believe the fact that Ava Gardner was once Mrs. Mickey Rooney? . . . I’ll always remember Ava for introducing me to “Lush Life.” the Nat King Cole recording. . . . The two leading exponents of “How to Be a Success in the Movies without Bosoms” are the Hepburns, Audrey and Katharine. . . . Progress in Picture Making: King Vidor’s “Hallelujah,” the first movie with an all-Negro cast, to Darryl Zanuck’s “Island in the Sun.” dealing with miscegenation. . . . Mamie Van Doren says she wishes she’d like the books she should read. I know Rock Hudson’s method. He learned to act by acting. . . . “I’d like to make an adventure movie,” said Tony Perkins, “in a strange foreign land where the hand of man has never set foot.” That’s Hollywood for You.