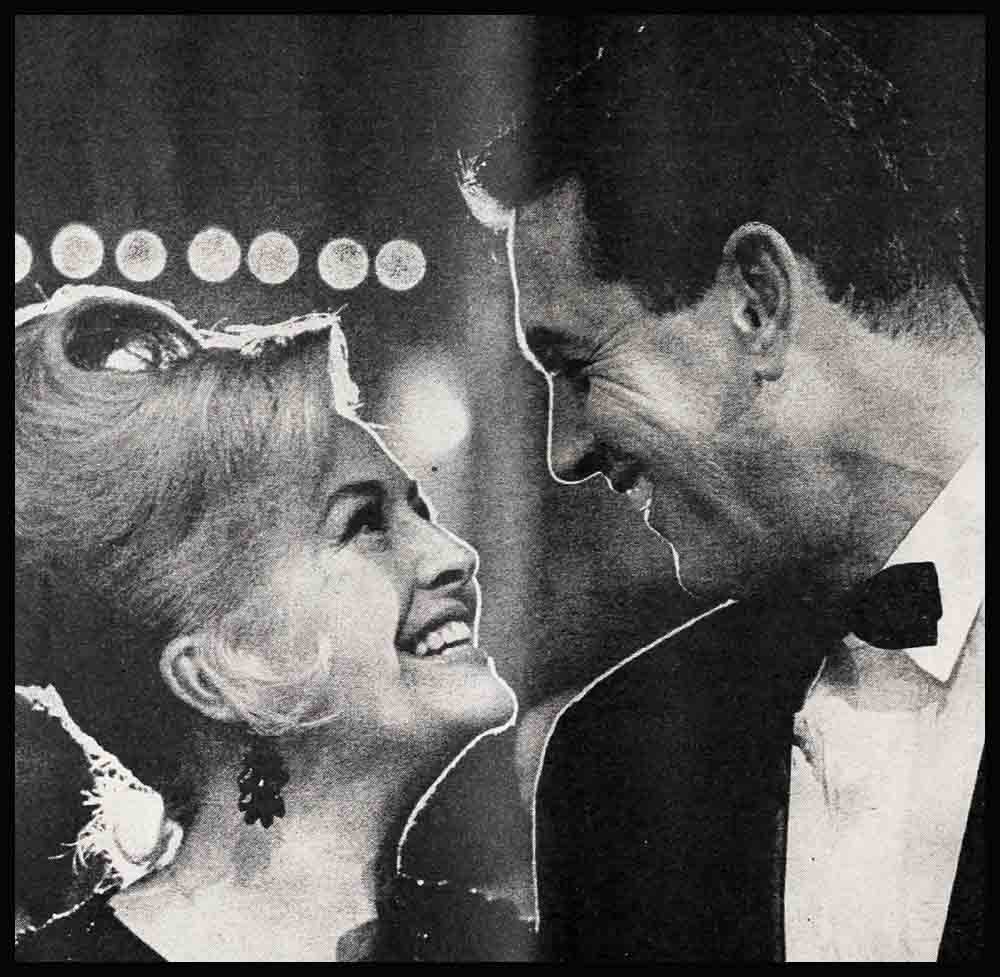 Frank Sinatra and Jill St. John are the talk of town. Frank must like redheads—Juliet Prowse has red locks, too. JilI spent a week with Frank at Palm Springs. She still is trying to negotiate a property settlement with her estranged husband, Lance Reventlow.

Has Elvis Presley finally found the girl to keep house with? The entertainer invited Priscilla Beaulieu (they met three years ago in Germany) to be his parents’ houseguest in Memphis. Pris is the daughter of a U.S. Air Force officer.

It certainly doesn’t look as if Vince Edwards is still serious about Sherry Nelson. When he was in Las Vegas for his night-club show at the Riviera Hotel, he dated both Juliet Prowse and Stella Stevens between performances.

There’s no love lost between Carol Lynley and her estranged husband Mike Selsman these days. He charges that following a meeting with a well-known producer, Carol came home and told him, “I’ll never be a big star as long as I’m married to you, So pack your bags and leave.” Carol denies it.

WOW, Sandra Dee created a sensation when she sported a black eye for two weeks. But that was because everyone jumped to the wrong conclusions. It wasn’t Bobby Darin who slugged her, it was her son, Dodd. Sandy was playing with the baby on the floor when, suddenly, his head banged into her eye.

Darin was in Los Vegas at the time, singing for his supper at the Flamingo Hotel. Attorneys for the pair are trying to work out a property settlement so Sandy can file for the divorce. Sad but true.

Sophia Loren, in town for the Oscar ceremonies, and husband Carlo Ponti felt right at home eating the marvelous Italian fare at Via Veneto Restaurant. Sophia also visited the Wax Museum to see the statue they did of her portrayal in the Academy Award winning “Two Women,”

Gary Lockwood and Joey Heatherton, the eighteen-year-old blond actress, re-discovered each other. They met two years ago when she was on Broadway, and just met again at M-G-M where both are working. He’s doing a new TV series, “The Lieutenant,” and she’s in “Twilight of Honor,” with television’s young doctor, Dick Chamberlain,

The way Gary acts around Joey one would think Tuesday Weld never existed. What ever happened to Tuesday? She enrolled at the Actor’s Studio in New York and re-discovered Richard Beymer.

Debbie Reynolds finally admitted what she couldn’t deny any longer—she and Harry Karl are expecting a baby in August. Debbie still doesn’t like to talk about it, though, because it brings back the tragic memories of last summer when she lost a Karl heir by miscarriage. Harry wants a boy; but Debbe just wants “a healthy baby—boy or girl.”

Scooping Around: Brigitte Bardot turned down Gardner McKay‘s invite to talk about adventures in paradise over dinner in Paris. . . . They gave Marilyn Monroe‘s old dressing room at Twentieth Century-Fox to Sandra Dee while she’s there doing “Take Her, She’s Mine.” . . . Liz Montgomery and a top star played movie love scenes for real. . . . Judy Garland and Sid Luft are at it again. They really keep their attorneys busy. . . . Interesting twosome—Skip Ward and Van Johnson‘s estranged wife, Evie. . . . What’s with the Frankie Avalons? . . . Both Doris Day and Marty Melcher are attending baseball games together. This should stop those rumors. . . . Now that Carol Burnett wed producer Joe Hamilton, Dick Chamberlain still has Clara Ray tugging at his heartstrings. . . . Gregory Peck still can’t believe he won the Oscar. He tells pals he thought Jack Lemmon would win. . . . Annette Funicello really loves those ponies. She goes to the track more often than Vince Edwards. . . . Isn’t Ingrid Bergman‘s daughter, Jenny, writing a gossip column for a French newspaper? . . . Yvette Mimieuz apparently changed her mind about obtaining a divorce, when a certain star jumped the gun by announcing they were romancing. . . . Look for Rick Nelsons bride, Kris Hormon, to join the “Ozzie and Harriet” TV family. Kris has never taken acting lessons, but she’s a beautiful girl and should phorograph like a million. . . . Glenn Ford is now dating Ann Miller. . . . Marie McDonald‘s ulcers nearly proved fatal. She was so sick doctors refused to start treatment or operate until she regained her lost strength.

Honeymoon? Rock Hudson plans a European jaunt this summer, and Marilyn Maxwell is packing her bags, too!

When Grace Kelly and her Prince flew to this country in April, she turned down all invites to come to Hollywood.

Alfred Hitchcock is still trying to persuade her to reconsider doing “Marne.” He’s even offered to make the film in Monaco. Grace would like to do it; it’s the Prince who’s against it.

Last time I saw Shirley MacLaine, we were both shopping at Seibu. She told me she was off to Japon and husband Steve Parker for a visit of several months.

Dickie-Boy Burton finally talked his Sybil into going ahead with the divorce so he can marry Liz Taylor. The estranged Mrs. Burton goes to Mexico to obtain it. The property settlement makes her a millionaire. Liz wants Eddie Fisher to file in Mexico, too. That way, Dickie and Liz would be free to marry immediately.

Guess Bo Belinsky is really hooked. He and Mamie Van Doren are looking for a ring, tho they’ve set no definite date.

Oddly enough, it was Mamie’s ex, Ray Anthony, who introduced her to Bo. Ray has always been a great baseball fan, and eight months ago told Bo: “I know someone you’d really like. You both have the same personality.” So Ray arranged for the pitcher and the actress to go out on a blind date.

If anyone cares, and not too many do, Jayne Mansfield has flipped for another Italian. He’s Nelson Sardelli, a singer she met while appearing in a Biloxi, Miss., nitery.

If you thought it was funny watching the Twist, you should see the young set dancing the Flamenco, the latest craze to catch on at the Casa Madrid.

It was heartbreaking to watch Bette Davis‘ reaction at the Academy Awards when Ann Bancroft was announced as winner. It wouldn’t surprise me if Bette probably figured she had her third Oscar in the bag.

Another surprise was Ed Begley‘s win. Omar Shariff had smelled victory, and he looked Iilce a canary who swallowed the cat when Begley’s name was announced.

You’d never know it from the way Frank Sinatra and Eddie Fisher greeted each other on the Oscar telecast but actually Frankie is miffed with Liz‘ ex. Eddie supposedly turned down a singing engagement at Frank’s Cal-Neva Lodge.

The Audrey Hepburn-Mel Ferrer marriage is smooth again. They leased a home for three months in Hollywood while she’s doing “My Fair Lady.”

Wasn’t Alan Ladd a little upset when his daughter, Alana, announeed her engagement to Bob Westbrook, Jr.? Bobby is a good pal of Ava Gardner‘s.

Connie Stevens has really flipped over Robert Vaughn—who, in many ways, is like her old beau Gary Clarke.

I didn’t think Jim Garner was a Rudolph Valentino but apparently Lee Remick did. She fainted in his arms while doing a love scene for “The Wheeler Dealers.”

All in the same month, Anita Ekberg married Rik Van Nutter, a Californian trying to become an actor in Rome, and Rod Taylor announced his engagement to model Mary Hilem. Rod and Anita, at one time, planned to tie the knot themselves.

Troy Donahue and Suzanne Pleshette had a big beef. She says they’ve decided to take a “rest” from each other.

Isn’t the Sue Lyon-Jimmy Harris dating for real? They were at the Academy Awards together and at the party afterwards. Harris produced “Lolita.”

Natalie Wood is dating her publicist, Guy MacElaine, more than she is Warren Beaty What goes on here?

Sleeper romance of the year, Don Rickles and Connie Francis. They met while appearing at the Sahara Hotel in Las Vegas. The romance is for real too.

Out the window went Pat Boone‘s image when he and Nancy Kwan participated in a torrid love scene in “The Main Attraction.” Pat doesn’t like it either. Charges that the film was cut so to make it appear he and Nancy had a wild night together in her bedroom. Wanted the producer to re-shoot the scene. Sorry, Pat, they wouldn’t do it.

Stefanie Powers and John Wayne‘s son, Pat, called it a day. Duke is a little crushed about it. Because he really wanted the actress for a daughter-in-law.

Short Hot Takes: Diane McBain and George Montgomery have resumed. . . . Angie Dickinson and French actor Alan Delon are an item. . . . Haven’t Mike Rennie and Mary Preminger decided against marriage? He was dating Carlyn Chapmon‘s sister, Carolyn, while in Hollywood to make “Mary, Mary.” . . . Lana Turner and Fred May are still talking reconcilliation. . . . When it comes to Cliff Robertson‘s gigantic date list, Sandy Freeman, a model, is in the number one spot. . . . Andy Prine decided not to name a celebrity in a divorce complaint. . . . Van Johnson is okay following cancer surgery. . . . Ann-Margret and Eddie Fisher looked like lovebirds at the Academy Awards. However, insiders claim this relationship is all tor publicity. . . .

Was certainly a surprise when Chuck Connors and Kamala Devi got hitched. Apparently she decided that love was stronger than her career. Chuck had wanted her to give up acting it they married. Or is it Chuck who weakened in his stand?

It’s no wonder Lois Nettleton turned down dates. The actress (she co-stars in “Come Fly With Me”) has been secretly married tor some time.

Janet Leigh and Bob Brandt deny the stork rumors, but I wonder? Debbie Reynolds once denied the same “truth.”

Tony Curtis won his point. Told Christine Kaufmann that following their marriage she must give up her career. So after she does “Monsieur,” she’s retiring. I believe the stork has something to do with their decision, too.

Marlon Brando opened his mouth again. This time to blast the press. I wonder it he realizes that it he feels the press had treated him roughly, it’s his own fault. He refuses to be interviewed by them.

Don’t chalk out the Kay Gable-Efrem Zimbalist, Jr., romance. He discovered Kathryn Grayson and she’s quite a discovery. They were holding hands at the party Ann Miller gave tor Kathryn. But Kay was on hand, though she was with another escort.

Marilyn Monroe‘s ex-press agent, Pat Newcomb, is now working tor the government. İt was Pat who was with Marilyn when she met the President and his brother at the presidential birthday party. Remember? Marilyn sang Happy Birthday to the Nation’s Chief. And now her song is stilled.

Big break tor Jim Franciscus when Warren Beatty pulled too many demands and was replaced in the starring role ot “Young-blood Hawke.” Warren acted like a Brando in demanding that he has script approval and the approval of his leading lady. I also heard warren and Suzanne Pleshette didn’t hit it off but that’s never a reason to drop a star! No reason at all.

Liz Taylor and her Dickie Boy are willing to star in “Camelot” tor Warner Bros, on one condition. Liz wants one-million and Dickie’s big-money demand has gone up from $500,000 to $800,000.

Hasn’t the Clan really been broken up? Only Frank Sinatra and Dean Martin appear to be members now. And they’re not bragging about it either.

İt seems to be serious between Edie Adams and Arthur Loew. Edie continues to work practically around the clock to pay off the debts against Ernie Kovacs‘ estate.

Puzzler of the Month: What actor (he stars in a TV series) was so drunk the night of the Academy Awards that he collapsed after presenting one of the Oscars?