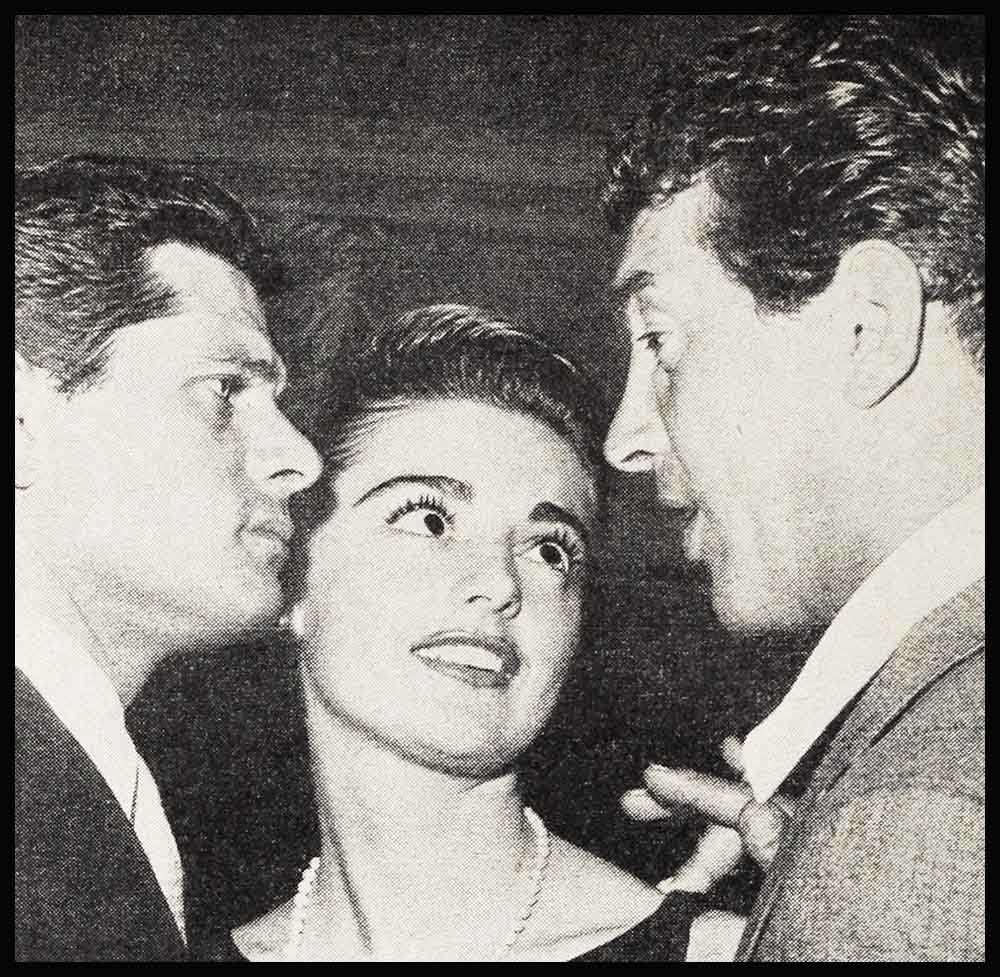 Thank You, TV: Both Anna Maria Alberghetti and Piper Laurie are grateful to television for taking them out of the sweet-young-thing roles. When Anna Maria played a gunman’s moll and Piper a highly-charged dramatic role, Hollywood producers sat up and took notice. Both girls these days are as busy as all get out. Piper, who had planned to go to New York for six months—she had even closed her apartment—was tapped for a lead in a Playhouse 90 TV production and had to unwrap the silver. For Anna Maria, this year looks great. She has just lined up a dozen concert singing engagements, commencing with the famous Philadelphia Orchestra, is weighing several TV offers and to top everything she may appear in a bright new Broadway musical, “East Side Story.” These two girls are going places—fast!

Snapshots: A couple who seem to be on a perpetual honeymoon are Mitzi Gaynor and her business manager-husband Jack Bean. Whenever they go out these nights they keep to themselves and usually are discovered sitting in a corner, smiling and holding hands. It’s lovely. . . . Though Mr. and Mrs. Eddie Fisher’s “bundle of joy” has been the principal center of attraction in the Hollywood baby marathon, the new offspring of Mr. and Mrs. Ray Danton (Julie Adams) should give Carrie Frances a run for her money. . . . When Natalie Wood turned up recently at a Hollywood party she was wearing an Elvis Presley pompadour. Now we wonder where she got that idea.

Bring Back the Clinches: Is Yul Brynner destined to suffer the fate of Roy Rogers—never to be allowed to kiss the girl? Maybe we’re old-fashioned, but we wish he’d been allowed to give Ingrid Bergman a kiss in “Anastasia.” Yul is one man who really knows how to make love, off screen as well as on. Never for a moment does he take his eyes from a girl and he really listens to what she has to say. In a town where most actors are constantly stealing side glances at themselves in the mirror or looking beyond the person they are with to see who else they want to charm, Yul’s technique is not only refreshing but positively atomic.

Ad Lib: Nine-year-old Melanie said it when her mother, Deborah Kerr, was presented with a golden medallion in the form of a halved apple by the Hollywood Women’s Press Club, for being the year’s most cooperative actress: “Will they give you the other half next year, Mummy?” . . . Peter Lorre said it when a friend ran into him early one morning: “I guess it’s not fair for any-one to meet me on an empty stomach.” . . . A catty friend said it when the Liz Taylor-Mike Todd romance was being discussed: “I remember when she was in love with her pet chipmunk.” Meow!

Tired of Criticism: Nick Adams is taking to heart the criticism he’s been receiving about latching on to the coattails of famous personalities. When he was asked to test with Pat Boone for a role in “Bernardine,” Nick avoided having his picture taken with Pat. “If people saw my picture with him, they’d think I’d deserted Elvis. I’m tired of this criticism. I’m very fond of Elvis and I don’t want to hurt his feelings.”

And speaking of “Bernardine,” Janet Gaynor, who has been off the screen since 1939’s “The Young in Heart,” plays Pat’s mother. Janet, who, of course, is the wife of Adrian, the well-known Hollywood clothes designer, has no plans for making a comeback, but hopes to play roles that appeal to her from time to time. We are certainly delighted to have her back with us!

A New Trend: If things keep on the way they’re going, there will soon be a lot of unemployed horses in town. The studios are still making “horse operas,” but without the horses. Out on the U-I lot, they’re readying an oil western, “Joe Dakota,” to co-star Luana Patten and Jock Mahoney, and there’s nary a horse in it. Then there’s Colleen Miller’s new picture, “Pay the Devil.” The day we visited Colleen, we couldn’t help commenting on how strikingly pretty she looked in a handsome pair of black jodhpurs and a silk shirt. But she confided to us that she doesn’t once go near a horse. “I just talk about going or having been,” she said.

Fissionable Material: Everybody who sees Kim Novak these days says that she looks and acts as if she’s about ready to explode. Kim’s explanation is that she is just trying to model herself after the fiery and temperamental Jeanne Eagels and that she is living her off the screen as well as on. This explanation doesn’t entirely satisfy the studio. For instance, the other day Kim showed up an hour and a half late for some still shots of a dancing sequence in “Jeanne.” Kim was nervous and refused to let anybody take pictures until she’d run through her number. She said she wasn’t a dancer and was afraid that she’d look bad. When the studio’s publicity department became irritable with her, she said, “If you think I’m temperamental, it’s because I am.” We think the real fact is that Kim is scared to death of this picture because she knows she will have to carry it alone.

Step Forward: Jeff Chandler is playing with Kim in “Jeanne Eagels” and he said that by working on the Columbia lot he was returning to the scene of his original crime. “Ten years ago, I played a role in ‘Johnny O’Clock’ with Dick Powell,” says Jeff. “But if you sneezed at a certain point in the picture you missed me.” Jeff’s delighted that Glenn Ford and several others turned down the role he got. They were afraid that Kim’s part would overshadow theirs. Jeff’s played an Indian brave so long, he’s afraid of nothing.

His Father’s Footsteps: When the Hollywood Women’s Press Club handed out its annual Golden Apples to the most cooperative actor and actress (Deborah Kerr and Charlton Heston were the recipients this year) Alan Ladd’s small son, David, was there to represent Alan, a two-time Golden Apple winner. Originally, the club had planned to present a children’s tableau and David was asked to participate. But, as they sometimes do, the plans went awry and the tableau was cancelled. David couldn’t have been more crushed if he’d had a ten-year option dropped. When Alan’s secretary told the club about it, the girls quickly made amends by inviting David to sit at the speaker’s table in the place of his father, who was on his way back from “The Boy on the Dolphin’s” Greece location.

Home, Sweet, Home: The big thing in Debbie and Eddie’s life, beside Carrie Frances, is their first real home. Until they moved in last month they’d been living in hotel rooms and rented houses, but now, at last, Eddie has carried Debbie over the threshold of their honeymoon cottage. Some cottage! It’s an old English-style home on two acres of the most expensive Beverly Hills property, with a brook running through the yard. It’s like living in the country, but with all the advantages of city life. Sunset Boulevard is just below them and no place in Hollywood is more than a half hour away. It’s a sprawling house built in the days when a California home was built to last. There is a projection room, put in by the former owners, and plenty of space for a growing family. Debbie had the time of her life, choosing furniture, drapes and bric-a-brac.

Paris Patter: What a difference a year makes! When Don Murray came to Paris in the spring of 1955 he was a member of the cast of “Skin of Our Teeth,” sponsored by the State Department as its contribution to the Salute to France program. An unknown at the time, Don lived in a tiny hotel near the Place Pigalle (GIs during the war called it Pig Alley because of the low-down girlie shows and other nocturnal entertainment) and ate in the cheap bistros in the neighborhood. Eighteen months later, when he returned, he was married and on his honeymoon, albeit a delayed one (“Very Hollywoodish,” says he, “to be expecting a baby on one’s honeymoon”), and a world-famed actor. This time he stayed with his wife, Hope Lange (whom he married while they were making “Bus Stop”), at one of Paris’ most expensive hotels and did the night spots. . . .

Another honeymoon couple who passed through Paris recently was Ruth Roman and Buddy Moss. She may change her mind when she gets back to Hollywood, but Ruth, who looks happy and glowing, is determined to take a six months’ vacation from the films. She refused the plum female lead in a modern version of Corneille’s “Cid,” to be made in Spain. . . . Elsa Martinelli is the despair of every eligible Parisian male. When she takes a holiday from work on “Manuela,” being filmed in London, she makes a quick hop across the channel to her favorite city, Paris, accompanied by her kid sister, Cilla. All her French friends are crazy about little Cilla, but don’t dig it when Elsa insists on bringing her along on dates.

London Lowdown: Van Johnson is determined that the whole family will stay in London for a year and has hired a private tutor for the children. Evie, on the other hand, is just as determined that they will ali return to Hollywood in April. . . . Richard Burton, hibernating in his native village of Pontrhydfen, Wales, denies he walked out of Otto Preminger’s “St. Joan” without warning, says he sent Otto a telegram asking to be excused because of conflicting commitments.