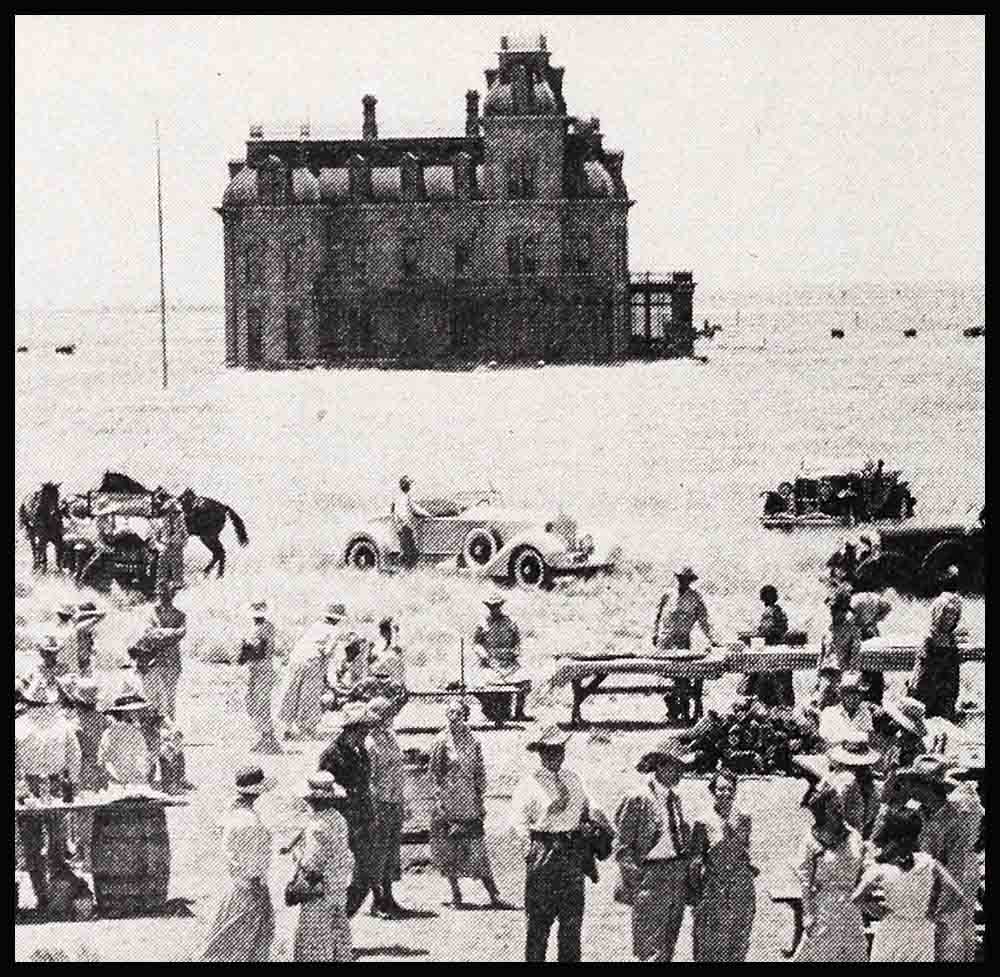 It’s February 7, 1957. Circle the date in gold, for this is the night of the Photoplay Gold Medal Awards, annual honors given to players and pictures chosen by you, the Photoplay readers. At the banquet in the Crystal Room of the Beverly Hills Hotel, genial m. c. Ernest Borgnine leads up to the Award presentations. And here they are. Among 1956 movies, the Gold Medal goes to George Stevens’ production of Edna Ferber’s “Giant,” a Warner Brothers release. Rock Hudson, starred in that Texas epic, wins Gold Medal acclaim as male star of the year, his popularity already boomed by his own studio’s “All That Heaven Allows” and “Never Say Goodbye.” Also for U-I, he’s now in “Written on the Wind” and next in “Battle Hymn,” then in M-G-M’s “Something of Value.” Columbia’s exquisite Kim Novak is the feminine Gold Medal star, for “Picnic” and “The Eddy Duchin Story,” then an arresting dramatic job in U.A.’s “The Man with the Golden Arm.” Among runners-up, Doris Day scores outside her one-time musical bracket, with acting hits in “The Man Who Knew Too Much,” for Paramount, and “Julie,” for Metro. Deborah Kerr’s queenly manner in 20th’s “The King and I,” Paramount’s “The Proud and Profane” and M-G-M’s “Tea and Sympathy” brings her into the winners’ circle, too. Though Janet Leigh made only one 1956 film, Columbia’s “Safari,” her fans voted her a top star of the year. While working on a little production of her own. Debbie Reynolds turned in a nice performance for M-G-M’s “The Catered Affair” and is currently in RKO’s “Bundle of Joy.”

Male runners-up include Yul Brynner, a dazzling new personality in 20th’s “The King and I” and “Anastasia,” and a commanding performer in Paramount’s “The Ten Commandments.” Tony Curtis retained his hold on moviegoers’ affections with U-I’s “The Square Jungle” and “The Rawhide Years,” strengthened it with U.A.’s “Trapeze. Showing his known versatility, William Holden remains a top favorite, applauded for Columbia’s “Picnic,” Paramount’s “The Proud and Profane,” Warners’ “Toward the Unknown.” A comparative newcomer, George Nader has built a solid fan following with U-I’s “Away All Boats,” “Congo Crossing” and “The Unguarded Moment,” and he clinches it with “Four Girls in Town.”

BUDDY ADLER: for his foresighted handling of new talent and outstanding use of star talent. The brilliant 20th Century-Fox producer, a winner with the Gold Medal picture of last year, “Love Is a Many-Splendored Thing,” proved in 1956 that he has a unique flair for making the most of both established players and newcomers. His “Bus Stop” not only gave Don Murray a striking head start in pictures, but gave Marilyn Monroe a chance to display the tenderness and intuitive knowledge of humanity earlier out-dazzled by her widely famed physical charms.

CECIL B. DEMILLE: for the creation of one of the screen’s greatest emotional and religious experiences. “The Ten Commandments” brought to its climax the producer-director’s forty-three-year, seventy-film career. As he celebrated his own seventy-fifth birthday, it was Mr. DeMille who provided the finest gift—for motion picture audiences. To his known mastery of spectacular screen effects and surging action, he added his heartfelt reverence, to make “The Ten Commandments” a deeply personal film translation of the Bible’s chapters about Moses and the Exodus.

BARBARA STANWYCK: for meeting with simplicity, honesty and superb craftsmanship the challenges of leading roles in seventy-five films; for having put her film experience to unselfish use, by giving wise, sympathetic counsel to newcomers in the motion picture industry. Incredible as it seems, Barbara has actually achieved this imposing total of pictures, celebrating her “diamond wedding” to movies last year with “There’s Always Tomorrow.” Such young players as that film’s Gigi Perreau will testify to Barbara’s unfailing helpfulness toward all new talent.

MICHAEL TODD: for the development of Todd-AO and his thoroughly delightful use of it in “Around the World in 80 Days.” The introduction of the new Todd-AO process in “Oklahoma!” was immediately hailed by audiences across the country. Opening in 1956 and running gaily on into 1957, “Around the World in 80 Days” fills the generous, curved screen with a wealth of beautiful scenes, all telling a continuously amusing story. Once identified mostly with stage presentations, Todd entered the movie medium with fire and with high imagination.

CARROLL BAKER looked deceptively colorless on her first appearance, in Warners’ “Giant.” But in the same studio’s controversial “Baby Doll,” she started a furor. In her personal life, the slender blonde is wife of director Jack Garfein, mother of baby daughter Blanche.

JAYNE MANSFIELD set no worlds afire on her first Hollywood try. But she got lots of fancy publicity after she landed an important Broadway role. Movies rewarded her with “The Girl Can’t Help It.” Also for 20th, she’ll repeat stage hit “Will Success Spoil Rock Hunter?”

VERA MILES is prime bet to take over the niche vacated by Princess Grace Kelly. More actress than glamour type, Vera’s the director’s darling. You saw her last year in “23 Paces to Baker Street,” for 20th, and for Warners both “The Searchers” and “The Wrong Man.”

SUSAN STRASBERG proved with Columbia’s “Picnic” that she inherited a full measure of talent from her famous dad, stage director and drama coach Lee Strasberg. An onstage click with “The Diary of Anne Frank,” Susan will play an ambitious actress in RKO’s “Stagestruck.”

NATALIE WOOD, a very youthful movie veteran, started out as a child actress, but gained her greatest acclaim within the past year, thanks to Warners’ “The Searchers” and “The Girl He Left Behind.” Also for Warners, she’ll star in the air epic “Bombers B-52.”

JOHN KERR did a spectacular double play during the year 1956, with the romance “Gaby” and complex drama “Tea and Sympathy.” Under contract to M-G-M, the brilliant young actor journeyed to Europe for his latest role, opposite Pier Angeli in “The Vintage.”

PAUL NEWMAN made his movie debut earlier, but really came into his own in 1956, with his startlingly different portrayals in M-G-M’s “Somebody Up There Likes Me” and “The Rack.” Personally a quiet young husband, with two small children, Paul’s striking on screen.

ANTHONY PERKINS, like Paul, needed a second try to make the grade. Overlooked after his 1953 debut in movies, Tony hit the jackpot with A.A.’s “Friendly Persuasion.” A Paramount player, he’ll be given a 6tar’s rating with “Fear Strikes Out” and “The Lonely Man.”

ELVIS PRESLEY was, without a doubt, the show-business sensation of the year. The rock ’n’ roll singer also turned out to be competent in the acting business, making his bow in “Love Me Tender,” for 20th. His next is a Hal Wallis production, Paramount release.

ROBERT WAGNER, once the hottest young name in pictures, did a smashing comeback in 1956, daring unsympathetic roles in “A Kiss Before Dying” (U. A.) and “The Mountain” (Paramount), going dramatic in 20th’s “Between Heaven and Hell.” His new role is Jesse James.

AWAY ALL BOATS (U-I): Jeff Chandler and George Nader were among the gallant Navy men in this fine sea saga

THE KING AND I (20th): As teacher to Yul Brynner’s children—and wives—Deborah Kerr felt a deep involvement

SOMEBODY UP THERE LIKES ME (M-G-M): Pier Angeli and Everett Sloane helped Paul Newman come to terms with reality