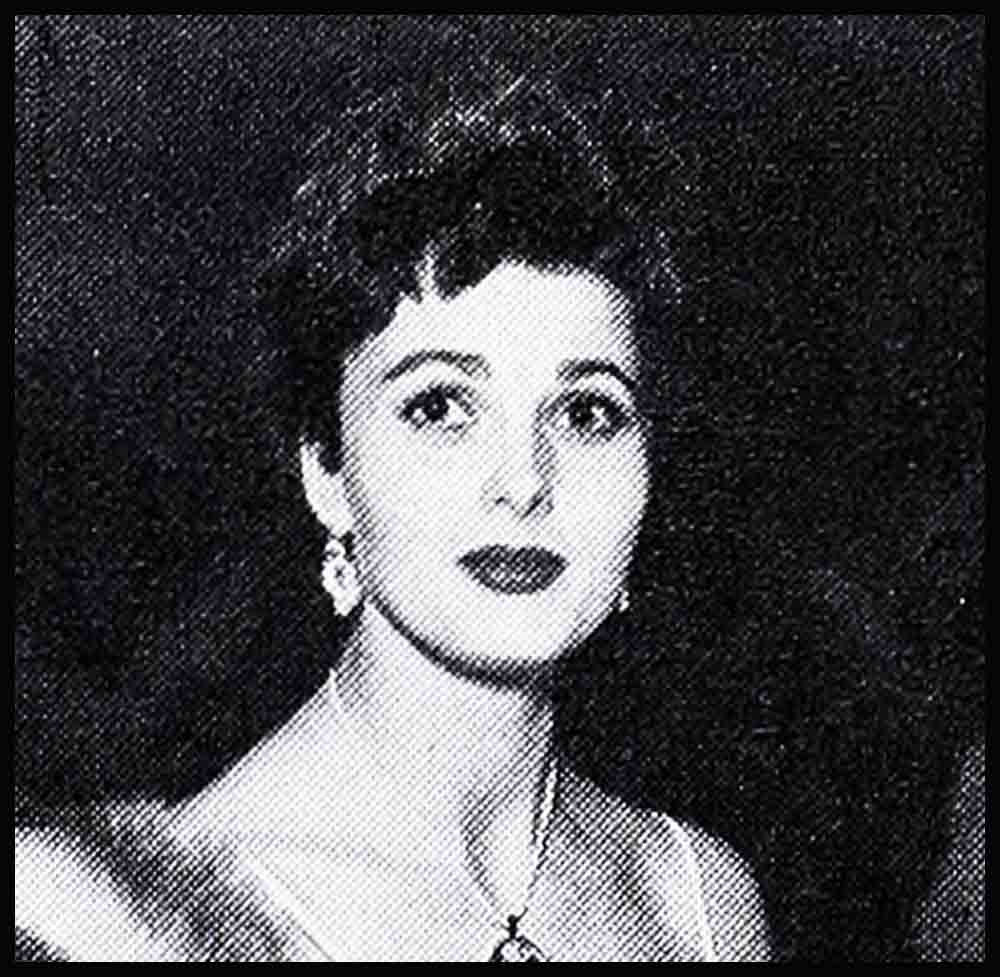 You’ll be seeing and reading more about it on other pages—but I couldn’t start party paragraphs this time with anything but photoplay’s Gold Medal Award dinner. Because everyone’s saying “it was the nicest and gayest banquet in years!” Some six hundred dressed-up guys and dolls tripped into the Crystal Room at the Beverly Hills Hotel—and there were lots of ear and eyefuls. Paul Douglas emcee’d amusingly, but it was the craaazy antics of Dean Martin and Jerry Lewis that really shook the chandeliers.

Marilyn Monroe did a little “shaking” herself—or rather, wriggling. Nothing compared with the show M.M. put on when she slithered up to get her award (as the fastest rising young star), wearing a skin-tight, gold lame, halter-necked gown, with nothing but skin under it! My private poll, among gals and boys, reveals they think Marilyn or any other gal—would be a more tasteful and attractive dish with something between epidermis and duds! Susie Hayward. who won top honors, looked like a dream. her red tresses set off by a floor-length. off-shoulder gown of pink net, s-o-o-o full-skirted. Gary Cooper was in Mexico, so hot-tamale Katy Jurado accepted his award for bim. wearing a slinky, very decollete, bare-shouldered, cream-color dress. Another brunette, Ursula Thiess, was striking in slinky white, trimmed with white fringe and held aloft by tiny, white shoulder straps. Lana Turner, swathed in silver-blue mink, and Joan Crawford, swirling in strapless chiffon of muted grays and blues, with real diamonds in her hair, at her throat. on her hands and in her ears, made a grand entrance. Joan said her lovely dress had once been a terribly expensive nightgown!

Rock Hudson beaued Mamie Van Doren, who used to be Joan Olander; Ann Blyth, with Dr. Jim McNulty, whom she weds in June, wore low-cut bouffant taffeta of contrasting shades, trimmed with beads and sequins. Jane Wyman. with groom, Freddie Karger, was in black sequins and beads, trimmed with white, and she sported gobs of pearls. Jean Simmons, too. was in black—low-cut chiffon and net. Debbie Reynolds, with Tab Hunter, looked like a doll in her off-shoulder gown of blue net over taffeta, with a wide cummerbund of deeper blue velvet ornamented with beads and flowers. Doris Day’s party dress was ballerina length—of rose chiffon, with cap sleeves. It was high at the neck, and flaunted a white, Peter Pan collar and a very full skirt. Jan Sterling also was in ballerina length—pastel taffeta, plus pearl necklace and earrings. Coleen Gray was so chic in a dress of dark-gray slipper satin, set off by vivid green satin gloves! Pale lafleta for Elaine Stewart—with a silver-blue mink stole and best beau. Walter Reilly.

Lori Nelson, with Bob Wagner, wore nekkidy white, trimmed with sequins and rhinestones. Hey—this could go on forever—so let’s just mention a few more stars on hand. Among them, Jimmy Stewart, Bob Taylor, June Allyson and Dick Powell, Marge and Gower Champion, the Ronnie Reagans, Suzan Zanuck with Dan Dailey, Mitzi Gaynor with Richard Allan, John Wayne, Stewart Granger. Yes, there was lots of glitter on the gowns the gals wore that night. But my crystal ball says the coming season will find less and less trim and tinsel on clothes. Line and fabric, elegance and simplicity will be the things to stress.

As always, Hollywood stars turned up in force when the cause of sweet charity called. One such event was the huge dinner-dance at the Ambassador for the Damon Runyon Cancer Fund, at which twenty-one movie belles modeled original creations from many famed stylists. Van Johnson was emcee, while Evie beamed from her table wearing a Howard Greer gown made solidly of white bugle beads! Outstanding among the film crowd was Janie Wyman in strapless black; Janet Leigh, who modeled even though she’d put in a twelve-hour day at the studio, and Joan Caulfield, who paraded a black Orry Kelly gown with a bejeweled coat.