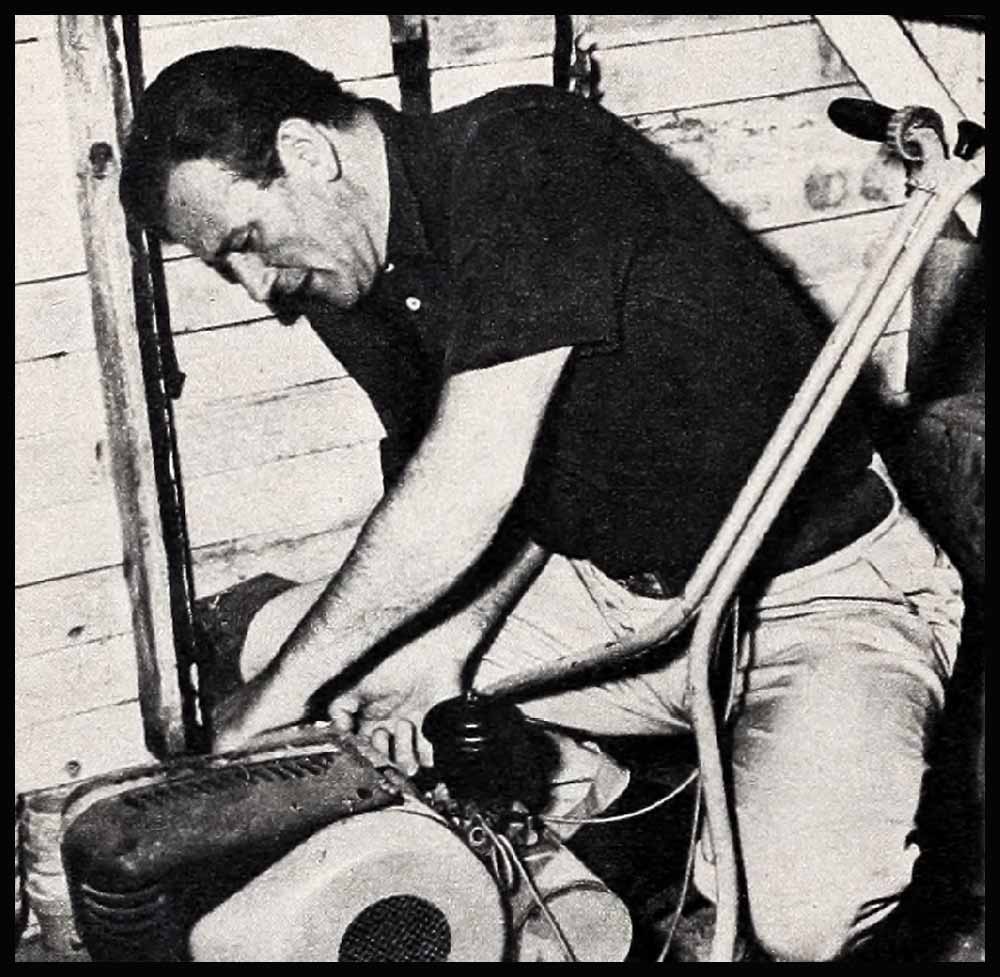 You wonder sometimes if movie stars don’t become like the characters they play on the screen. Then again, you wonder if maybe it isn’t the other way ’round; if stars aren’t chosen for certain parts because that’s what they’re like really. I know! I’ve watched them all—the tough guys, the ingenues, the waspish women, the heroes and the heels.

Bette Davis, who played Margo Channing in “All About Eve,” is more like Margo than Margo is like Tallulah Bankhead, on whom she supposedly was modeled. I know a couple of Bette’s previous husbands quite well and they tell me Bette and Margo are one—the same, unpredictable type of person, complete with the flinging around of mink coats and staccato excitability. Plus the genuine warmth and intelligence and sense of humor that Margo had. Margo, Bette—it’s all the same, and if you liked Margo, you’ll love Bette. Gary Merrill did and does, both ways.

Peter Lawford has changed considerably since he started at Metro as a British boy actor. In some respects for the better. In others—I’m not sure. He’s no longer the eager youth dashing madly to the studio in his open convertible. But he was friendlier then. Whether or not it’s because Pete has played so many “other men” parts in pictures, nowadays he seems less of an optimist. And I don’t quite know which adjective to use about the following incident. It’s an open secret in Hollywood that Sharman Douglas finds or found Pete extremely fascinating. In fact, she’s said to be carrying a man-size torch for him. But Pete, probably unthinkingly, brought his new interest, Jeanne MacDonald, to Sharman at RKO and sort of put her under Sharman’s protective wing. If Sharman really is still in love with Pete, that was pretty thoughtless.

Jane Wyman has been a hard girl to fathom at any time. But there was a change in Jane after she played the deaf-mute in “Johnny Belinda.” Some people believe that the strain of the role was partly responsible for the break-up of her marriage with Ronald Reagan. But I personally believe that some of the divorce can be blamed on Ronald’s talkativeness, which can be very boring. However, Jane was a sick, depressed girl both during and after this picture.

Elizabeth Taylor has told me many times that she hates to play society girls on the screen—she’d rather be a gypsy. But Elizabeth has patterned quite a lot of her private life attitude on the way the society girls behave in her pictures. Fundamentally, Elizabeth is a fresh-air country girl who loves dogs, horses and chipmunks. And the haughty stuff and quarrels with her family are alien to her innate sweet nature. I hope film fame will ultimately bring Elizabeth happiness. To date, it has only brought confusion for her family and for her.

John Wayne is still “Duke” to the people who knew him as Duke Morrison. And they all still know him. His great success, his position at the top of the Photoplay Popularity poll (he won the Photoplay Gold Medal this year) hasn’t changed him at all. In fact I’m not sure how good an actor John really is because he’s exactly the same person in and out of his pictures.

Gregory Peck is another local boy who made good without making his associates miserable because of it. Greg was raised in La Jolla, California, which is why he started the La Jolla Playhouse, a very profitable tourist attraction for his home town. I remember when Greg startled me with his portrayal of the sex-crazy, selfish Lewt in “Duel in the Sun,” shortly after he had electrified me with his sensitive characterization of the priest in “The Keys of the Kingdom.” I asked him—“Which is the real you?” He grinned and replied, “Ask my wife.” I did. Sorry I can’t tell you.

The big change in Olivia de Havilland started with her two-year-long battle to free herself from her Warner contract. And remembering the carefree, happy girl she used to be, it is sad to hear no sorrow expressed in Hollywood over the not-so-hot reviews and brief six-weeks run for Olivia’s “Romeo and Juliet” in New York. She tries so hard with every acting job. I’m wondering if there isn’t such a thing as trying too hard. I hope that her next movie assignment will be a little romantic part. Then maybe Olivia will return to her early lighter, gayer self.

This was the theme of course of “A Double Life,” the picture that produced Shelley Winters for better or worse. I think for better—Shelley is fun.

Come to think of it, it s only natural that playing dramatic tragic roles all the time should have a sobering effect on performers. Certainly nearly all the screen killers, except Humphrey Bogart, are exceptionally quiet men in real life. Jimmy Cagney never speaks above a whisper. George Raft rarely cracks a smile. Richard Widmark is moody and broody. As for Bogey, he has always been on the raucous side in his public and private life. It was just as noisy before Warners elevated him to stardom and he used to complain about his bosses just as much then as he does now. Only now, at $200,000 a picture, he doesn’t have any reason to.

The oddest contradiction in reel and real life in Hollywood is Jane Russell. The sexy extrovert on celluloid is a deeply religious, modest girl at home, with a chapel in her own backyard. The posters can show Jane struggling for her honor in low-cut gowns till kingdom come. Away from the camera the only thing Jane struggles for is to remember a passage from the Bible, most of which she knows by heart.

June Allyson can be pretty cute off screen if she thinks an occasion warrants it. But on the whole she isn’t too carried away with her characterizations. It was a good thing for June, as it is for every young performer in Hollywood, that success here didn’t come right off the bat for her. She had a two-year very discouraging wait before she made a hit, playing herself really, in “Two Girls and a Sailor.” It’s a better thing that she fell so in love with Dick Powell, older and wiser.

How about the movie sirens—the Ava Gardners, the Hedy Lamarrs, the Lana Turners? They remind me of the comedians, most of whom are sad sacks away from the camera. These delectable dames rarely wear make-up or dress up off duty. Hedy is notorious for her peasant dresses. Lana loves shorts. Ava goes in for slacks. And all three cinema sirens have this in common—they passionately desire a husband and home life. At this writing, Lana has it, and I’d say she was the happiest of the three. Hedy is prepared to travel to the four corners of the world to get hers. Ava is hoping that somehow, somewhere, she can be Mrs. Sinatra.

How about the lover-boys, the gents who always get the females in films? Do they repeat in private life? Let’s see. Errol Flynn had his marriage option dropped by Lili and Nora. Stewart Granger was divorced by his first wife. Robert Taylor— well, you know about Robert. Clark Gable—you know his history too. Cary Grant? After winning Virginia Cherrill, Barbara Hutton, and every girl in pictures for two decades, including the time he was

a ghost in the “Topper” series,Cary has now been won for life, I believe, by a bit of a girl, Betsy Drake.

I said before that the comedians of the screen were sad creatures in private life. Not all of them are. It’s impossible to define where Red Skelton of the screen begins and the ditto of civilian life ends. Red never stops making with the gags. But Red’s jokes are never at the expense of any living creature. Nor are the wisecracks of Bob Hope.

Martin and Lewis can be even whackier away from the camera. But once in a while, when no one is watching, Jerry forgets the funny face and is the complete coordinated businessman. Jerry passes on everything—even the advertising posters for their pictures. And recently, when a columnist took some cracks at Dean, Jerry did the same to the columnist. “Dean’s my friend as well as my partner,” he told me quietly. “Anyone who hurts him is not my friend.”

George Sanders usually plays a very rude man in his pictures. I don’t know whether George gets these roles because he is rude in real life, but it could be. However, recently I made a discovery about George. And I should have suspected it before. His sardonic speeches are a cover-up for an oversize inferiority complex. When I phoned him to talk about something else, he engaged me in a lengthy conversation all about, “What did you think of my singing?” (On a radio show.) Why, George, I didn’t think you cared what anyone thought. Incidentally, I thought he sang divinely and told him so and the purr at the end of the line could almost be stroked. I also discovered that Mr. Sanders has a sense of humor. When the story was printed that he could not play the Pinza role on Broadway in “South Pacific” because he was supposed to have an operation, I called him to say, “Is it really true about the operation, or is it an operation for cold feet?” He roared—with laughter.

Jeanne Crain, the mother of three, still has the wistful air of a little girl, that made Janet Gaynor famous. With Jeanne it’s a case of her roles being chosen for her. She is wistful and feet-off-the-groundish. She was a natural for those roles.

Bette Davis is Margo, Elizabeth Taylor is the society girl, John Wayne and Duke Morrison are one and the same, Gregory Peck is, well, Gregory Peck. The contradictions are there, too . . . the sirens, the gag-men, the lover-boys, they’re all double personalities. But that’s like the old “which comes first, the chicken or the egg?” routine.