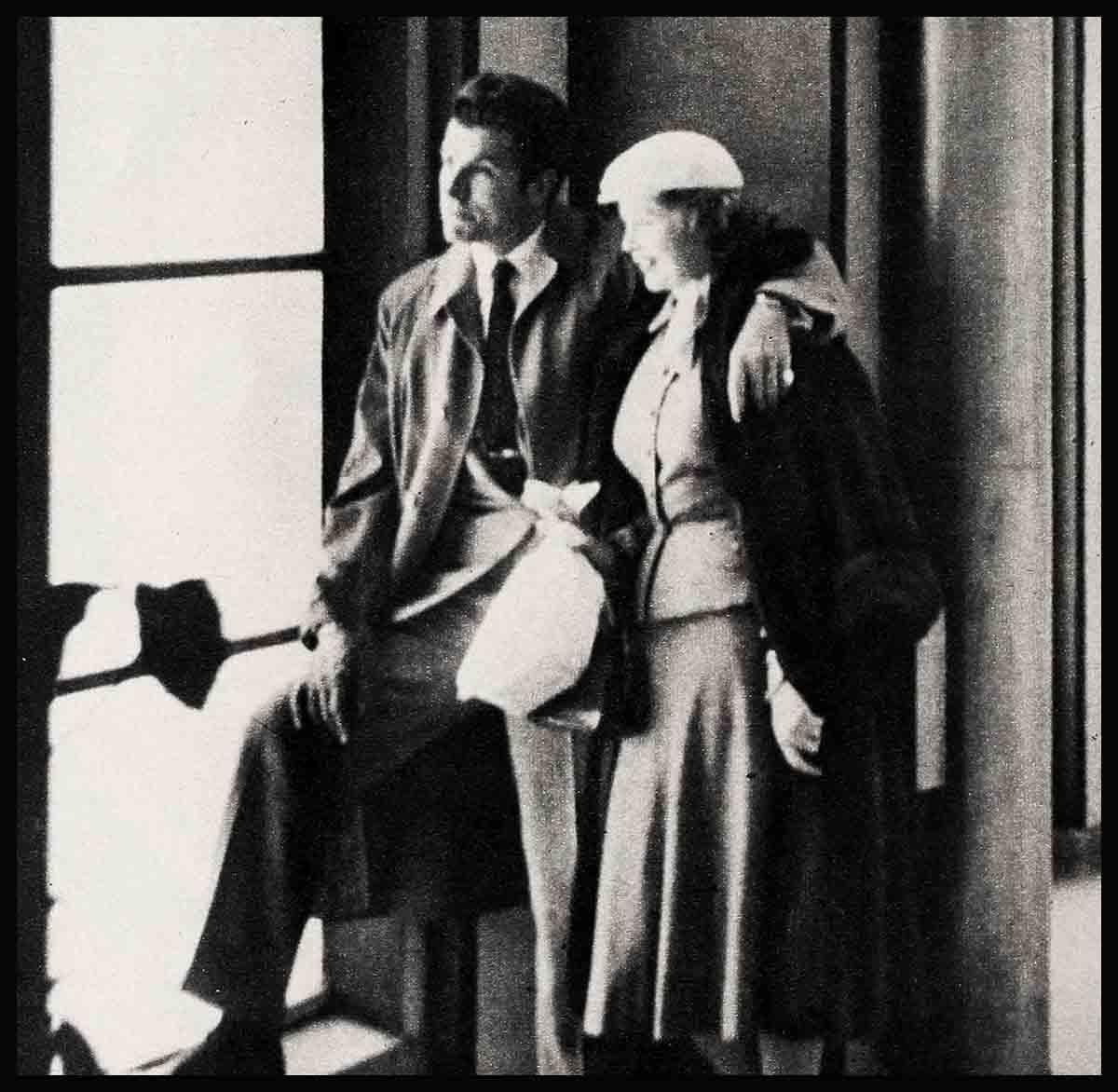 Arlene has been variously described as the “beautiful Dahl,” the “practical Dahl,” “the efficient Dahl” and the “incomparable Dahl.” But no one—by the wildest stretch of the imagination— would ever have thought of dubbing her as either sentimental or flighty.

Not, that is, before she began to be one-half of the inseparable Dahl-Lamas duo! But since Fernando, the tempestuous Latin lover, took over, Arlene has been a surpisingly new person.

She deftly juggles several careers—movies, lingerie manufacturing, writing a column—and, in the past, she has made sure that her every statement to the press would be sure to advance one—or preferably all—of them. Now, she won’t even talk to the press—about anything—unless Fernando is in on the, interview.

She won’t pose for a picture that doesn’t include the light of her life, and she makes no plans—either social or business—that exclude Lamas.

And those who know her best state quite firmly that she has never looked more beautiful, been more scintillatingly witty or so downright happy in her life before.

Fernando Lamas, as everybody around Hollywood knows, is one of the most sought-after males to hit the town in a long, long time. There’s a magic something in his personality that starts the ladies setting ther very best new caps the minute their eyes fall on him.

And, as always, with men who are as much in demand as he is, there’s an easy-come, easy-go manner—a debonair Casanova attitude—that drives the ladies wild.

Fernando Lamas is a man who’s used to calling the turn. He wants what he wants when he wants it and not one minute later. That’s why this town was so surprised when Fernando went along to New York with Arlene this spring, when she had to be there on business. It remembered—very vividly—his adamant refusal to go either to Mexico or to Las Vegas with Lana Turner when their romance was at its height.

Now no one thinks of Fernando Lamas as the docile type. No one believes for a moment that he would have taken the trip across country just to please Arlene—or just to see the lights of Broadway—if he hadn’t wanted to go.

And the fact that he did go has made the movie world feel there may be something to all those marriage rumors that have been making the rounds.

At this moment, neither Arlene nor Fernando is making any statements on the subject. They just keep on looking into each other’s eyes, keep on dancing together, keep on giving the town cause to do some of the busiest speculating it’s done for some years.

Those who remember that their romance burst into bud when they first worked together in Paramount’s “Sangaree,” and really blossomed as they finished shooting in Warners’ “Diamond Queen,” can’t help wondering what will happen to their love when they go their separate ways career-wise—even if only temporarily. While Fernando was plunging into work on “Lost Treasure of the Amazon” opposite Rhonda Fleming, Arlene was holding out—refusing to be cast with any other leading man.

Arlene sums it all up in one simple sentence: “Working with Fernando is more stimulating than working with anyone else.” As far as the lady is concerned, the gentleman, it seems, can do no wrong. She adores his sense of humor, doesn’t mind how much he teases her (and he teases her a lot!) and seems enchanted with his fiery bursts of temperament.

And from Fernando’s point of view, Arlene is a good-luck charm. She made his first screen test with him when he arrived at M-G-M some two years ago. And it was as a direct result of this test that he was given his first Hollywood assignment—in “The Law and the Lady.”

“The sparks began to fly,” Arlene admits, while they were making that test together. She found Fernando “terribly exciting.” And he was by no means unaware of the lovely Arlene’s appeal, for he asked her for a date almost at once. Interested as she was, Arlene parried his invitation with, “But aren’t you married?”

“Sorry. But that’s not good enough.”

And that was that for the time being.

Not long afterward, Arlene married Lex Barker, a state of affairs on which Fernando seemed then neither inclined nor qualified to comment.

He has however—since he and Arlene have been a steady duo—expressed himself rather colorfully on the subject. He once said to a group of their friends, “She’s been losing her time.” When it was pointed out she had been married to Lex Barker, Fernando quickly countered, “That’s just what I mean. Losing her time.”

But that “time loss” will be completely and legally over in October when Arlene’s divorce from Lex becomes final.

And October, to Fernando and Arlene, is a special month no matter how you look at it. For it will mark a full year since they first began their steady dating.

In October, 1952, Arlene was spending a weekend in Palm Springs, alone except for her secretary. With a couple of hours to fill, she wandered into a movie and saw Fernando in “The Merry Widow.” Completely enchanted by his performance, she sat down and wrote him—of all things!—a fan letter. But she didn’t get around to mailing it, and when she returned to Hollywood, she still had it.

So she was a very astounded girl when she found among the messages that had stacked up in her absence, that Fernando had telephoned her. She got on the phone to him at once.

“This is fantastic!” she said. “What an incredible coincidence. I saw your picture yesterday and I wrote you a fan letter. I was just getting ready to mail it.”

“Oh, don’t waste the stamp. I’ll come right over and pick it up.”

The six-months anniversary of that first date, they spent together in New York. If their plans go through as anticipated, they’ll celebrate the full year in Europe.

And they may even do more than that. They may even join forces for keeps—and come back to Hollywood as Mr. and Mrs. Fernando Lamas.