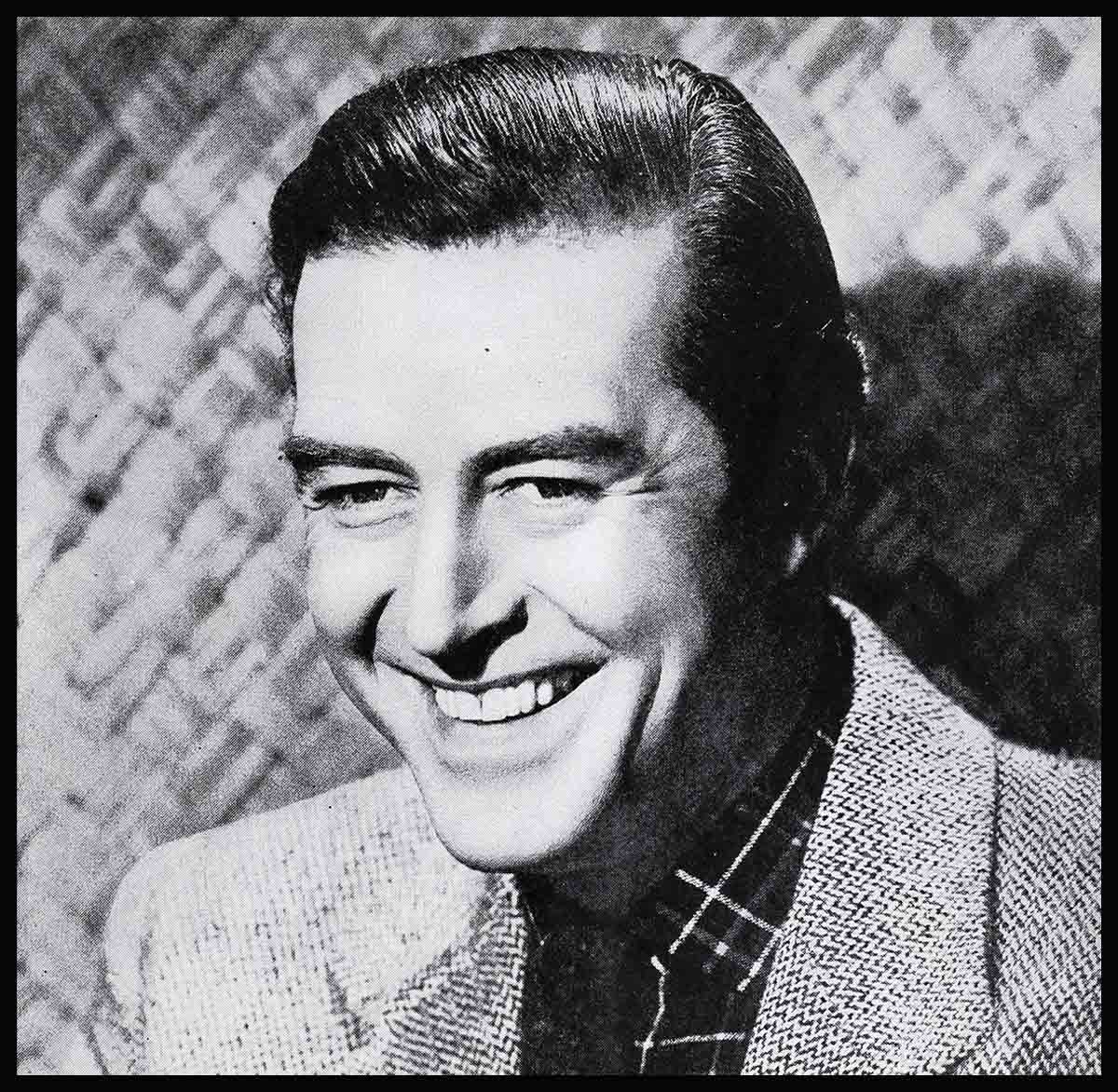 The Truth About The Ray Millands

I have been predicting for many, many weeks, even when few people, if any, agreed with me, that eventually the Ray Millands would be back together again. Now that it’s come true. I’ll tell you why I had the courage to make what seemed at the time such a dubious prophecy.

If you talk to the very handsome Ray, as I have done, you know that there never was another girl for him and that the quarrels he has had with his wife were due to what he calls “temperament and moodiness” that come to any actor who works as hard as he has done for the past thirteen years.

Even though this parting was the third one, the Millands believed it was now all over for them. As he stood at my bar mixing Martinis a few weeks ago, he said, looking unhappy, “Mal is a marvelous person, honest, charming, absolutely without guile and with a great sense of humor. If I have any fault to find with her, it’s the little habit she has of listening to other people’s troubles.

“I would come home,” he said, “and there would be four or five friends all pouring out their problems into her sympathetic ear. I used to wish they would go home, or had never come, because I had my problems, too, and wanted her to sympathize with me. She is such a naturally sweet person that anyone who has troubles comes to Mal. I am Welsh and temperamental but I am not emotional, so I could never properly express myself.

“I have never been in the slightest interested in any other girl since I first set eyes on Malvina Muriel Weber thirteen years ago at a bridge party given by Martha Sleeper. I took a look at Mal and trumped my partner’s ace, I was so taken with her!”

“All right,” he said, “I will! I had been going about a bit with two young socialites—you know them here in Los Angeles—but I never saw either one of them again after meeting this glorious creature. ‘There,’ I said to myself, ‘is the next Mrs. Jack Millane!’ ”

“Oh, didn’t you know my real name is Jack Millane?” he answered.

Then I remembered that Mal always calls him “Jack” and so does Ann Sothern, Bob Sterling, Walter and Fieldsy Lang and the coterie of friends that he and Mal associate with in Hollywood—or did until that day six months ago when he walked out and left the wife he adores and his little boy, Danny, after a quarrel which he himself says was utterly senseless. But let’s go back thirteen years when Ray (as I shall call him because that’s the way you and I know him) married Mal. As I looked at him and listened to that fascinating accent—he speaks in the manner of most Englishmen, although he is one hundred percent Welsh—I could understand why Mal found him so attractive. Attractive enough to come back to three times!

The first rift came in 1931 after they had been married only a year. It was more than a rift because Mal divorced him and Ray returned to England where he remained for two years.

“But the memory of Mal brought me back,” he continued. “I couldn’t get her out of my mind. I decided to return and beg her forgiveness and see if she wouldn’t take me back because there wasn’t any other girl in my life.

“At the time she divorced me I was very bitter. I felt I was a flop on the screen. I had made one picture at M-G-M and I was no good. That I knew.”

Once back in this country Ray begged Malvina to remarry him. But it was not easy. She hesitated, telling him he had to get a steady job of some kind first. But she was as attracted to this exciting man as he was to her. So they were remarried in 1934.

Mal, Ray insists, wanted him to take a job with an oil company at $21 a week just so they would have a sure income. “If I had listened to her,” Ray laughed, “it would have taken me ten years to save as much as I now make in a week.”

From that second start Ray went right up the ladder and he has been one of Paramount’s most important stars for the past eleven years.

When he and his wife parted again in 1938 he stayed away only a week. So that can hardly be counted as anything other than a little quarrel. But this time it was four months.

“What happened to cause this long break?” I asked.

“Well, I came home in a bad temper,” he replied, putting the blame on himself. “I had had a terrible day at the studio. I was grouchy and disagreeable and I guess I slammed things around. Mal said, ‘This has got to stop. I am a reasonable and patient woman, but I won’t be much longer if I listen to you rave and rant!’

“She said, ‘I wish you would come back when you find yourself and can behave like a normal human being.’ ”

I couldn’t believe my ears while Ray was telling me all this. He is so like a small boy without one atom of conceit. What other actor would have been so frank about himself? He knew he had been a naughty boy and had made life difficult for his wife. He said he stormed out of the house, believing that Mal would call him back. But not only did she ignore him then but she let four months elapse before agreeing to reopen the issue.

She had been having, to all outside appearance, a wonderful time going out to dinner with their friends, living her own life. But I knew in her heart she had been thinking constantly of him.

In fairness to Ray, you must know he suffers continually from migraine headaches. He is so deathly sick when they come on him, without warning, that he swears he cannot even bear the sound of a dog walking across the driveway!

“I want to be absolutely alone when they come on,” he said. “I can’t talk to anyone and I can’t stand the slightest noise.”

He loves the theater—particularly the musical theater—and says he inherits the Welsh love of music. He has a fine collection of records, opera and classical selections which he loves to play.

In connection with his records there is a very funny story which involves Mal. After they had been parted for a few months he grew hungry to hear some of his records. So he wandered home to play them for an hour or two. Mal wasn’t there. He found that the needles were old and the machine wasn’t in good order. It made him so mad when the records sounded scratchy that he banged on the machine working himself up into a towering rage. Mal finally walked in about eleven when he was the maddest!

“I just came home to hear some music,” he told her.

“Then we battled all over again,” Ray said. “Mal has a wonderful sense of humor, but neither one of us would yield an inch. If she had asked me to stay then I would have moved back bag and baggage. But she didn’t—and I wouldn’t ask to be forgiven.”

It all sounded so simple and childish that you wondered why someone didn’t take them by the hand and say, “Come on, you two, kiss and make up and forget all this nonsense.”

On the other hand, though Mal is a woman of serene poise, tempers and tantrums can be a terrific strain on even the most patient and understanding of wives. I knew she was waiting for Ray’s nerves to stop jingling and jangling. She particularly wants him to go to a doctor and try to rid himself of the terrible headaches which have dogged his life and made him so miserable. One thing that had upset Ray was that he hadn’t seen any of their old friends. But the answer to that was simple. He had no telephone and they were not able to reach him.

When he and Mal parted he went to live with Ray Crane, a friend he lived with when he first came to Hollywood. Crane is now in the packing business and doing well. But in the lean days the boys were very broke. Theirs is a friendship that has never changed.

It seems in a way unfair to dwell so much on Ray’s temperament and “Welsh disposition”—for it is typical of him to take all the blame on himself. If he is a moody man—he is also a most delightful and charming one. There is not one bit of “ham” in his make-up. Oddly enough he is never temperamental at the studio, never makes unreasonable demands. He is one of the most amiable of the Paramount stars and with the possible exception of Alan Ladd, gets the pick of the best pictures.

I felt like speaking to him like a sister—or a lawyer—and telling him that he should be a great deal happier than he is. It is true he works hard. In eleven years he has made fifty pictures and he says, “Sometimes I get so mixed up playing other characters that I can’t tell where they stop and I begin.” The drunk in “The Lost Weekend” took a lot out of him—and I don’t mean that he hit the bottle. But the hero’s complicated nature is a great deal like Ray’s own personality. Life bears down—and the nerves snap.

Ray, I believe, has now learned his lesson—that little things are not so important. Let’s hope he doesn’t again lose sight of the wonderful things he has, a lovely wife, an adorable little boy, his home—one of the most charming in Hollywood—and his success, as balanced against such little annoyances as victrola needles. And he would not—he is too sane, witty and clever a man to do that—if it weren’t that he has been dead tired—almost “out on his feet.”

And now that I am so busy giving out advice to Ray I’m going to give a little to Mal, too: The man you married and love is nervous, tired and run down and he needs you. We women have to make concessions and fight for our happiness. Yours is too precious to toss lightly aside just to prove a point.

As Ray said in parting, “Mal and I remind me of that corny song, ‘You Always Hurt The One You Love.’ ”

Now that all’s well once more with the Millands, Ray’s tune has probably changed to another “corny” favorite, “There’s No Place Like Home,” though, strictly speaking, it’s never been anything but that with him. Good luck, Ray and Mal!