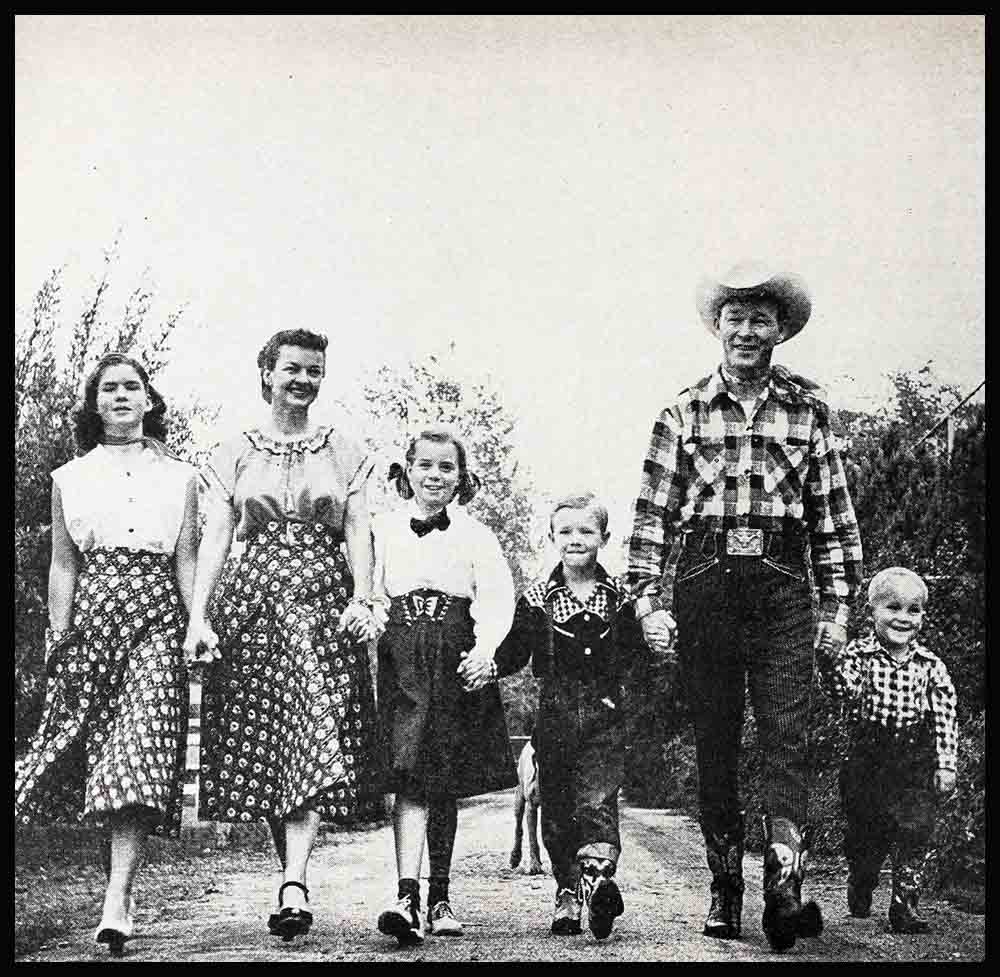 The three youngsters stood spick-and-span in their Sunday best, trying to be calm. “There they are!” Dusty shouted as he caught sight of Roy and Dale. “And there’s Little Doe and. . . .”

He stopped for a moment and blinked. While Dale carried Doe, his dad was leading a little boy by the hand. “This is Sandy,” said Roy, as they reached the junior welcoming committee.

“Howdy,” said Sandy, in his Roy Rogers tone. Little Doe gurgled. And with that the new arrivals were quickly surrounded and became official members of the Rogers clan.

The family knew about the adoption of Little Doe, but there had been no word of Sandy. This was because Roy and Dale planned to arrive on Dusty’s birthday and wanted Sandy to be the most memorable present in Dusty’s young life. They were right. Dusty could hardly believe his eyes. And he knew that this was, indeed, his little brother and that he would take care of Sandy from then on.

It was a happy day for all the Rogers. It marked the end of a long period of waiting. Dale had discovered Doe early last spring when she flew to Texas to be with her family. While there, she visited the nearby orphanage from which Cheryl was adopted. In the nursery, one baby stood out among the rest. She was part Choctaw Indian. the matrons informed Dale. “Roy has Choctaw blood, too,” Dale replied. And a vivid memory of the child stayed with Dale.

In August, Robin was taken ill. She died two days before her second birthday. Roy and Dale threw themselves into work in an attempt to assuage grief with activity. It was Roy who suggested they adopt a baby girl “to take the place of Robin.” Dale answered mechanically that no other baby could take Robin’s place. But she began to think about it, in spite of herself.

On another trip to Texas, Roy suggested they visit the children’s home. Doe was still there—and ready for adoption. The Rogers weren’t certain they would be allowed to have the child, but Dale wrote a letter to the home telling how much she and Roy and the children needed the baby. During their rodeo appearance in New York, they received a call saying that their request had been granted.

The adoption of Sandy was an unexpected event. For a long time they had felt that Dusty needed a brother. And for over a year they had planned. Wherever they toured, they visited orphanages, seeking a boy in Dusty’s age group. They were on a personal appearance tour after the New York closing when Roy received a call from a woman in Kentucky. She told him that her daughter was a cerebral palsy victim. She was poor; she had three children of her own and acted as foster mother to fourteen wards of the State. Tickets to the show were out of the question, but if she brought her daughter to the arena, would Roy say hello to her?

As they talked, the conversation took a more personal turn and soon Roy was telling her of the search for a brother for Dusty. The woman said that she had such a little boy on her farm—one of the State wards. “Why don’t you bring him along when you come?” Roy suggested.

So Roy and Dale met Sandy. And Sandy, forgetting his natural shyness when he found himself with his hero, sauntered over and said, “Howdy, pardner.” It was a case of mutual love at first sight. The next day, Roy and Dale visited the judge, signed papers and claimed their new son.

The new members of the Rogers family have settled in beautifully. Dusty is busily teaching his brother the simple things that we assume all children should know. As for Little Doe—the children’s beloved Dodie—she is the queen of the household. The queen who ravishes her subjects with a grin: two teeth, front and center.

It’s a full house, but there’s always room for one more in the Rogers’ hearts.