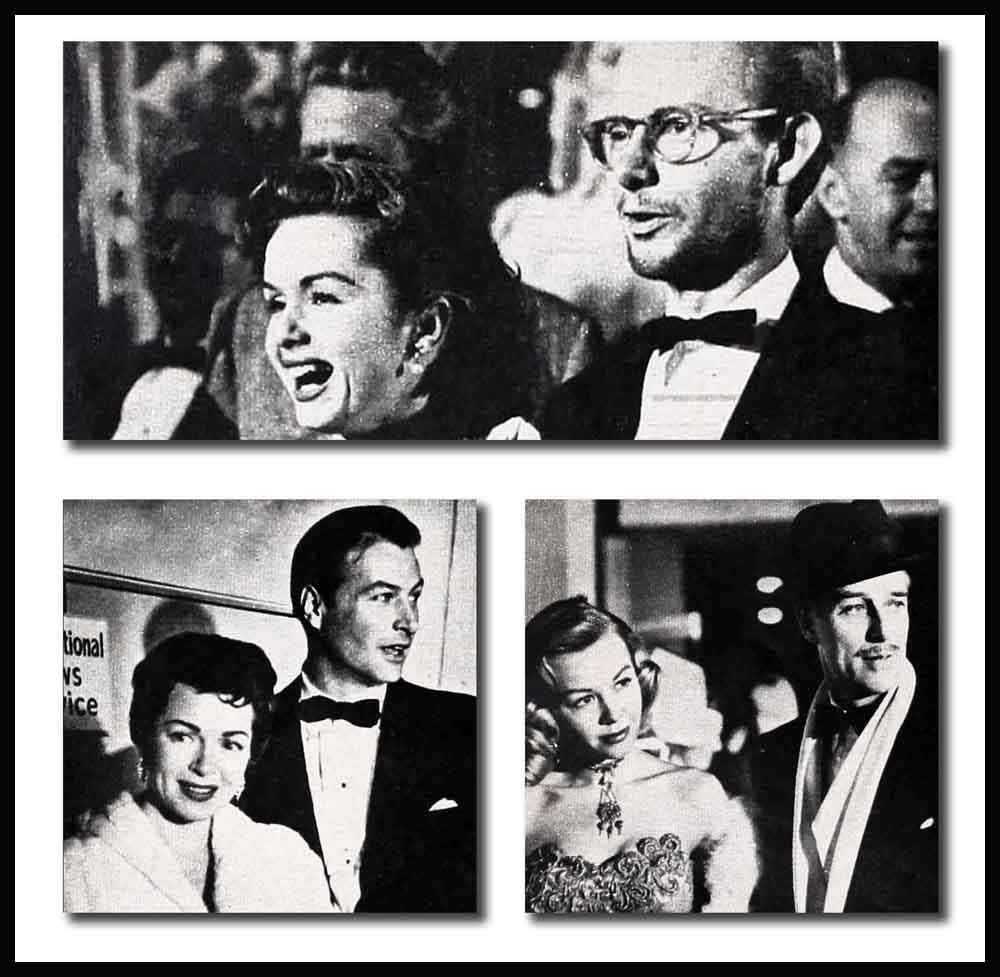 TWO OLD-FASHIONED hoe-downs (one, hillbillyish, one just old-fashioned) were among Movietown’s high spots this month. Both honored Western-type fellers—Guy Madison and John Wayne. An actor has to be an unusually nice guy to have his agent throw an expensive shindig for him; and it was manager Ned Marin who took over Charley Foy’s Supper Club to give a huge Gay Nineties shindig for Wayne, complete with barbershop quartets and a horse and buggy. There were baby pictures of Wayne all over the place, blown up to huge size. When I asked Marin the reason for the party, he said, “No special reason. Someone ought to give John a party every week.”

John was all done up in madly striped suit and huge rhinestone studs, links, stickpin—as Diamond Jim Brady. Most of the evening, he beamed on Pilar Palette as he introduced her around—by her married name, Mrs. Weldy! Johnny Weismuller was equally “loud” in a checked suit, big handle-bar moustache and derby hat. Most of the gents wore flowing lip foliage and most of the gals were in Lillian Russellish costumes—hour-glass shapes, elegant low-neck gowns, lots of frills and feathers. One of these was Jeanne Crain. June Haver arrived with Betty Lynn and Dick Clayton. She left with Fred MacMurray, who was stag. Their now high-gear romance started that eve.

The Andy Devines rounded up-about a hundred of Guy Madison’s chums for the birthday-barn dance they gave on an ABC sound stage. There was a buffet dinner of spare-ribs, baked beans and such stuff; square dancing to a hillbilly band. Photogs had a field day shooting the Western garbed guests who included Rory and Lita Calhoun; the Ricardo Montalbans; Joan Weldon; Jean Simmons; Debbie Reynolds, Richard Egan, Scott Brady.

What a gay life the young blades lead! For example: Lance Fuller took Kathleen Hughes to a cocktail party the French consul gave for lovely Ludmilla Cherina (you’ll be seeing her in “Sign of the Pagan” with Jeff Chandler)—then rushed home, picked up Melinda Markey and beaued her to the premiere of “Cease Fire.” Terry Moore saw the show with Captain Roy Thompson and Dick Allan was with Janet Stewart. But back to the Cherina soiree, where Jeff Chandler was with Betty Abbott, and Rock Hudson twoed with Julia Adams.

Saw a lot of those “little black dresses” at above affair—and was reminded of something Don Loper (who does the duds for many of the town’s chic gals) says: “Always have at least one in your wardrobe—and wear it when in doubt. But don’t make the mistake of letting it become a crutch, or an excuse for a lack of originality.” I’ll add—wear your craziest hat and most startling accessories with that little black dress.

The biggest scream from the fans in the bleachers at the fancy preem of “Knights of the Round Table” came when Lana Turner and Lex Barker traipsed into the theatre. Lana with her short bob and dark hair looked lovely. But most think she’s even more beauteous as a blonde. She wore a dark red Dior gown topped by a stunning white mink jacket. Jane Powell wore a dark green taffeta that flared like crazy from the knees down. She too was white mink-jacketed, on the arm of Mona Freeman’s ex, Pat Nerney. Elaine Stewart was smothered in white fox; ditto Rhonda Fleming, Virginia Mayo, Marie Wilson, and Ann Miller. The Cecil B. DeMilles; Debbie Reynolds (who didn’t mind that escort Leon Tyler was bearded); Ann Blyth and hubby, plus lots of others. But not the “Table” stars. Ava Gardner was in Italy and Bob Taylor still in Egypt.

At “The Eddie Cantor Story” preem, the guests arrived in cars that “wore” gadgets on their headlights that made ’em look like Cantor’s popping eyes. Ticket holders: Virginia Mayo and Mike O’Shea; Aldo Ray and Jeff Donnell; Vera-Ellen and Dick Gulley—and half the town’s biggies!