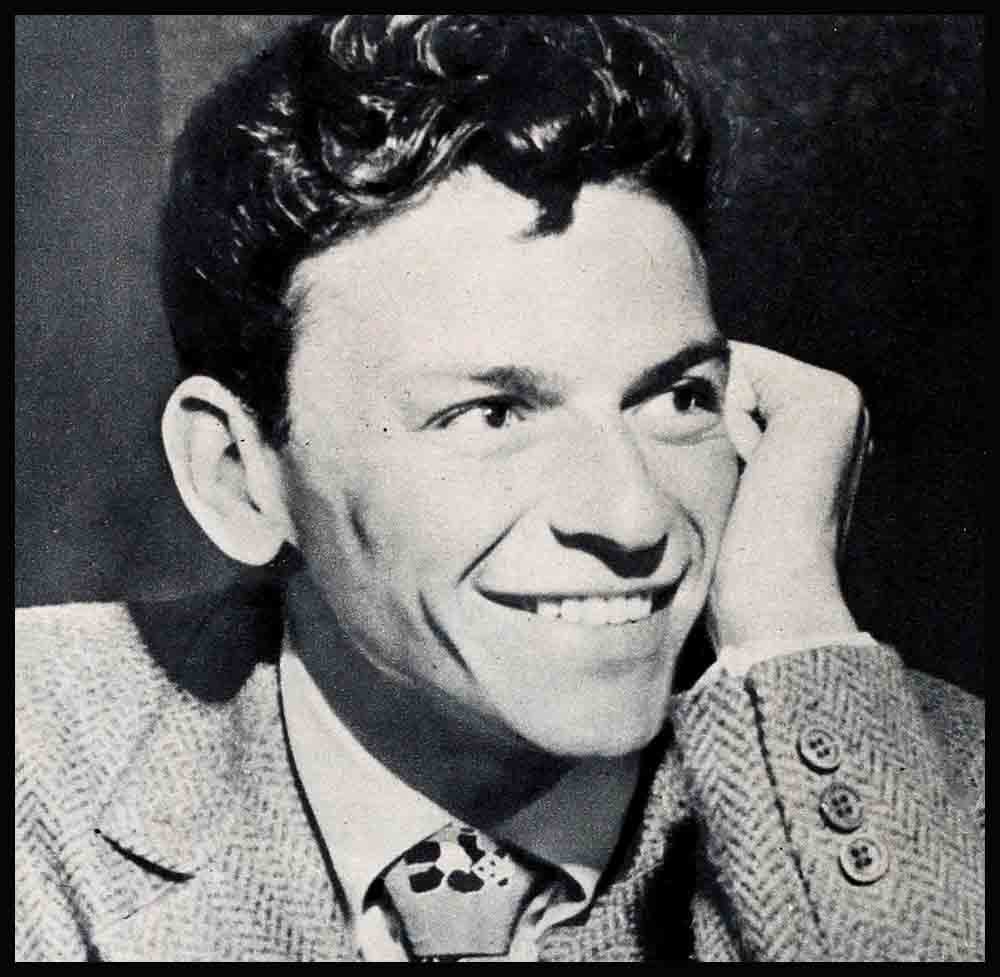 You And Frank Sinatra

Among the hundreds of letters received each month by Claudette Colbert in response to her Photoplay department, “What Should I Do?” came this appeal from a worried mother. Miss Colbert considered the underlying problem of such importance that she requested the advice of a trained psychologist. Photoplay found such a man in the person of Lawrence Gould, eminent in his field. Here is his answer, but more important still, his warm defense of today’s teen-agers.

If you have read the letter below, you are undoubtedly asking your-self, “How would I answer if the problem were put to me?” So let’s tackle it together.

In the first place, if you’re a Sinatra fan yourself, you have at least some idea of how this girl feels. You know there are millions who feel more or less the same way, and that there are a good many of these whose emotions sometimes run away with them and make them do things which seem pretty silly—anyhow, to an outsider. Maybe you’ve seen Frank’s admirers held back by the police to keep them from mobbing him to get his autograph, to give him presents, or even to tear off pieces of his clothes for souvenirs. And you yourself probably have spent time listening to his records or dreaming over his picture when you should have been doing your homework or helping your mother with the dishes.

In a way, you can see why it all seems silly to people to whom Frank doesn’t mean what he means to you, yet you know at heart that you’re not really crazy and you feel, away down inside, that the folks who make fun of you somehow just don’t understand you. Maybe you wish that you knew how to explain yourself to them—especially your parents-—and yet when you try, you don’t know where to begin. Let’s see if a psychologist can help you.

Suppose you begin by reminding the people who tell you you’re crazy that girls always have gone in for hero-worship, even to the point of adoration, in the years between the time when they start dreaming about romance and the day when they’re ready to be married. Ask mother or grandma, for example, to tell you about the “matinee idols” in the days before the movies, or the way the great pianist, Paderewski, used to be mobbed by adoring women after his recitals. Ask your older sister if she didn’t feel the way you feel about Sinatra when Charles Lindbergh first flew the Atlantic. Actually, they were doing then, as you are now, the same thing that your kid brother does when he plays “commando”—getting ready to meet the experiences of grown-up life by living them out beforehand in imagination.

Deep down in your heart, you know that this is what you’re doing, and you even say so, though you may never have realized what your words meant. You say Frank is “simply out of this world,” meaning that the way he makes you feel is altogether different from the feelings you have about ordinary things and people. For that matter, the Sinatra you’ve adopted as your dream man is himself quite different from the real Frank, although the real Frank is an unusually charming person, and much nicer to be married to—for his real wife—than any dream man would be. Only right now, it’s a dream man you need and, for my part, I am very glad you’ve found one. In fact, it is only when you forget that Frank is a dream man and try to make him real for you that the trouble begins.

That, of course, is what the girl whose mother wrote to Miss Colbert was doing when she threatened to leave home because she “simply had to see” Frank. And, before I could advise her mother wisely, I should have to know what drives her into thinking about doing something which, even at her age, she must know is foolish. All I can say positively is that scolding, punishment and ridicule are likely only to make things worse.

You see, if you are the average Sinatra fan, you love to get “out of this world” occasionally, but you’re willing to come back when duty or some other interest calls you. And when a girl can’t or will not come back, it must be because there’s something about the real world that’s “too much for her,” and her mother’s problem is to find what this is and correct it. For girls of fourteen just don’t leave homes in which they’re happy, even though the reasons why they are unhappy may be things their parents never realized, or thought important. Perhaps this girl’s parents don’t get on too well together, so that the home atmosphere is strained and painful. Or they may have overstrict ideas, so that their daughter cannot get the fun a girl needs except in her private dreamland. Or perhaps nobody ever helped her learn to get on with her playmates—boys, particularly—so she grew discouraged and quit trying.

I had quite a talk with Frank about girls like her, and he seemed to agree with my idea that there really aren’t any “delinquent children”: There are only parents who—often through no fault of their own—have fallen down on their job. This job in the present case (and it’s the girl’s job also in the long run) is to help her find a better way of making up to herself what she is missing. It is to discover real things she can get fun out of doing, and real people she can learn to care for.

To begin with, people don’t really develop into the right sort of men and women by what they read in books—even though books are important, as Frank himself often tells you. Our characters are formed mainly by our mental pictures of the people whom we either want to be like, or like to imagine caring for us. You can’t be in love with a man, even a dream man, without trying to be what you think he’d want you to be—beautiful and sweet, for instance.

But what made you choose Sinatra as your dream man? Or, if not him, then some other famous person whom you probably will never meet, and certainly can never hope to have a chance to spend the rest of your life with?

Primarily, there is the fact that “everybody’s doing it,” and that’s even more important to you now than it will be when you’re a little older. Because you’re still more than a bit scared inside and find it easier to do what other girls your age do than be different and run the risk of being thought peculiar. This, in fact, is the real reason for most of the “crazes” young people go in for, and it’s too bad that more older folks don’t understand it.

Then again, it’s a lot simpler, at first, to love a dream man than a man you know and have to “do something about.” I dare say that on your first real date, you were too much worried over the impression you were making to enjoy the evening, and I’ll bet ten to one that you’d be scared speechless if you had to spend an hour with Frank “in person.” But so long as all you have a chance to do is dream about him, you can be as glamorous and irresistible, and can make him as devoted as you please, and nobody can stop you. Of course, someday you will realize that the real thing, even if it isn’t perfect, is better than dreaming; but right now your dreams are necessary as a sort of dress rehearsal for the big moment that’s coming.

The men, old and young, who make fun of your “swooning” are in fact much more to blame for it than you are. For, in recent years, there’s grown up what amounts to a conspiracy to cheat girls out of romance. I don’t know how the idea got started that a man who’s thoughtful and attentive to a girl is the next thing to a sissy, but I do know that idea has cheated a whole generation of girls out of what ought to be every woman’s birthright. And if the girls try to make it up to themselves by falling hard for somebody who acts the way they’d like to have their friends act, whose fault is it? Not theirs!

This of course, in his way, is the thing that Frank Sinatra is particularly good at. I’m not going to talk about his singing from the standpoint of a music critic, because that is not my business. But he does get into his voice something for which the best word I can think of is “pleading.” He makes you feel that to him a girl’s love is precious beyond words, and that he will be heartbroken if he fails to win and keep it. And by making yourself feel you are the girl to whom he’s singing, you get the sense of your own importance—the “build-up” in your own eyes—which you must have before you will have the confidence to face the world as a woman. No wonder you love to listen to him.

And now I am sure you’d like to have me tell you how I think Frank feels about you. The thing that surprised and pleased me most about him was the seriousness with which he takes the job of meaning what he does to the future wives and mothers of the country he loves. I believe that he not only likes you and is grateful to you for the success you have given him; he believes in you and in the future for which he is helping you get ready. In fact, as I write he is just starting on a tour in which he plans to speak to a good many thousands of you in your schools and churches on the things he feels are most important to you: Racial and religious tolerance and the need of staying in school as long as you can.

For himself, he’s human enough to enjoy your admiration, but would like to have you think of him in private life as the happy husband and devoted father he is. In fact, there is nothing he appreciates more than the way in which most of you have taken his wife and his babies into your hearts with him.

Anyhow, so far as Frank is concerned, your devotion is safe with him until you are ready to transfer it to one who’ll give you in return a love that will be all yours.