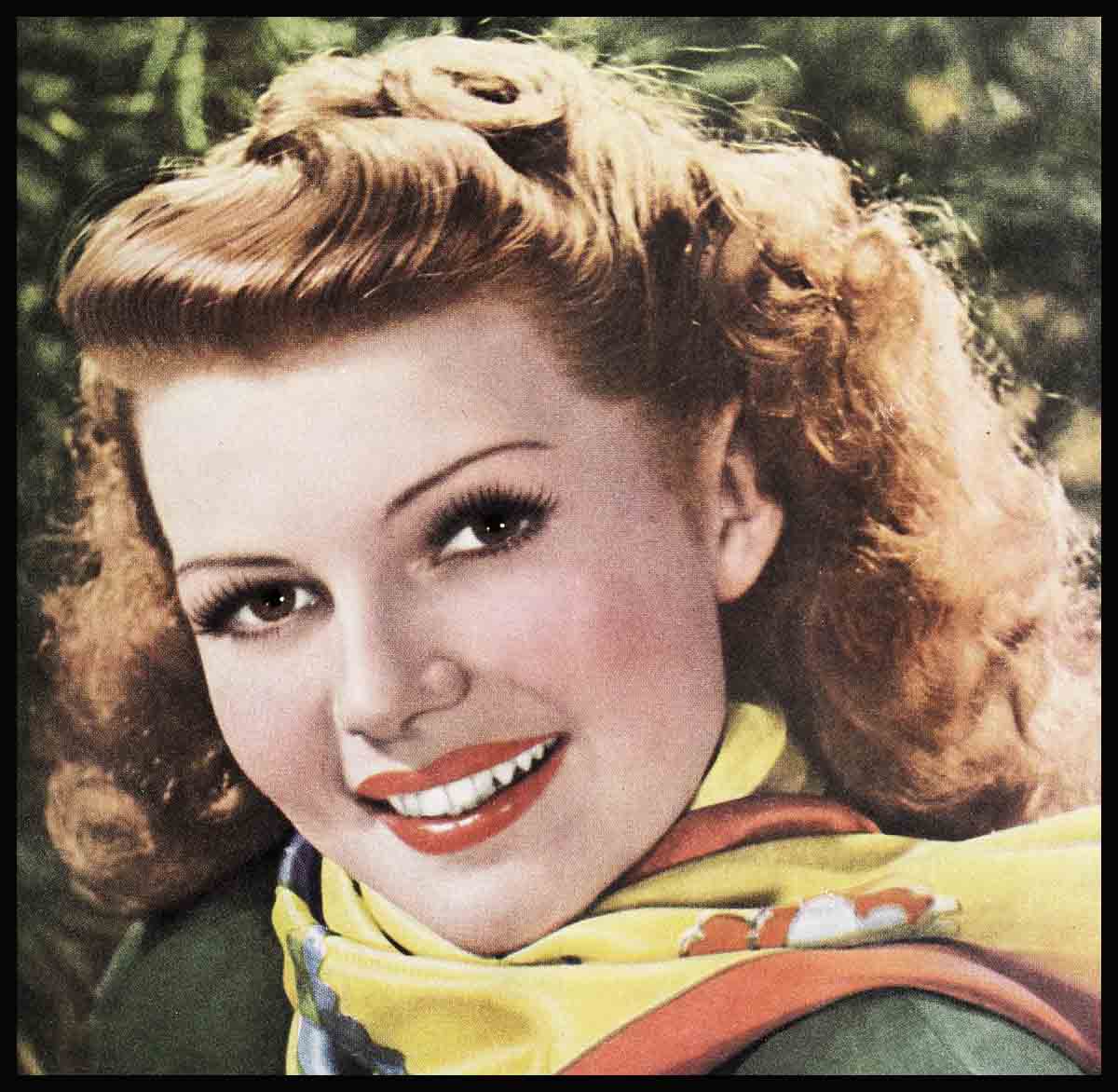 Personal history: Born in New York City; began dancing on the stage with her dancing father at fourteen; which led straight to the swank Agua Caliente Casino in Mexico—and thus right into Hollywood, the movies and stardom.

Pet beauty trick: When you’d use a comb, she uses a brush—she carries one with her always and applies it to her thick red hair steadily throughout the day. Result: That thick red hair!

Favorite flower: White roses—she always has one in a vase in her dressing room.

Worst faults: Staring into space when someone is telling a long story—actually she hears every word, but who would guess it? And inventing all kinds of excuses to keep from going to bed; then dreaming up further excuses, come dawn, to keep from getting up again!

Who lives under the same roof with her: Husband Orson Welles; not-yet-a-year-old daughter Rebecca; the baby’s nurse and the cook.

What else the roof covers: A gray functional house in West Los Angeles, with miles of window-glass enclosing the most colorful house-hold in America! It’s a happy confusion of: Thousands of books, magazines, newspapers and superb modern paintings hanging everywhere; posters of every description also everywhere; a collection of masks ditto—and records by the hundreds, Rita’s bull-fighting equipment (for dance purposes only), Orson’s magic equipment, Orson’s easel and painting utensils (his latest painting orgy included circus clowns as subjects), dozens of musical instruments . . . and a recording machine! Got a hobby? Drop by the Hayworth-Welles place and indulge it at once!

Book she sends to all her friends: “The Little Prince”—which, she says, is a charming book that makes you ashamed of yourself for fancied injuries. She’s read it four times now, whenever she’s felt sorry for herself; she always puts it down happy and satisfied.

What Rita and Orson do at home of an evening: They put on a samba record—and while it plays, Orson accompanies it with all the samba instruments he owns and Rita flashes around the living room in a spontaneous dance.

Her school of thought on hats: She likes them—but you’ll never catch her wearing one. Though in her closet you’ll find two she’s owned for years for an “emergency” that never arises: One light blue straw with trailing ribbons and one black coachman’s hat. They gather dust, not loving attention.

What you’ll find filling all her bureau drawers: The biggest glove collection in the country. She has them in nearly every color, with accent on black and white. Her favorites are black fabric with three layers of black fringe that swing when she moves.

How she likes her dresses: Sports style, or better yet, suits. And all of them simple.

Favorite color: Chartreuse first—and then everything except shocking pink, which would be a shock with that red hair!

Vital statistics known to her marriage license: Her real name is Marguerite Carmen Cansino, and her real age is twenty-seven.

What the Hayworth-Welles team does between jobs: They get out of town—overnight, and happy as larks! No hunting or fishing trips, though—they turn up in San Francisco, New York, or Mexico City whenever they have a breathing spell.

If you peered in their compartment on trains you’d see: Both of them with their noses buried in murder mysteries. Rita taught Orson this habit of making time fly while traveling—and now they never put foot on a train without a mystery tucked underarm! Otherwise, they never read the stuff.

What you’d always spot on her mantel: The castanets with which she clicked her way to fame—and the silver cigarette box given her by Hollywood news photographers as the “most photogenerous” actress.

Favorite role: Out of thirty-eight pictures made to date, her favorite role was in “Cover Girl.”

What she likes best to eat: Mexican fried beans; and Mexican tacos—which means tortillas made of corn, toasted and filled with chicken, lettuce and tomatoes. Or else filled with beans and chili sauce.

How she keeps that far-flung figure. By eating constantly! Days when she’s not working, though, she only downs two meals a day because of sleeping late. She breakfasts at 11:30 on the works—eggs, bacon, fruit, toast, jam, coffee. Then she has tea late in the afternoon and dinner at eight.

What she nibbles between meals: Gingersnaps, steadily.

Happiest moment every day: When she gets home from the studio and sees her husband and baby.

Pet piece of furniture in the house: Her radio—so that when she can’t accompany Orson on his trips and radio shows, at least she can hear his voice.

What she wants to be doing twenty-five years from now: Traveling all over the world with her husband and three children—but always coming back home to Hollywood.

When she and Orson vanish from sight, here’s where they are: They’re in the hideaway log cabin they recently bought on the northern coast of California, with a gigantic living room, two bedrooms, two baths, a kitchen . . . and an amazing view of the ocean.

What Rita would be doing if you dropped in on her of an idle day: She’d be practicing bull-fighting with all her bull-fighter paraphernalia—she learned the art for three hours a day during one solid month, from a professional Mexican instructor. She is planning a dance based on traditional bull-fighting technique—she doesn’t plan to enter the bull ring.

Songs she hums around the house: Odd little tunes that she makes up on the spot.

The cars you’d see in her garage: Orson’s beige coupe and her pale green phaeton. But Orson never drives himself—his valet-chauffeur drives him to work and his luscious wife drives him on all dates. ’Twas so even during their courtship!

Pet form of entertainment: Small dinners at her home or another home. Never, never night clubs. But the usual Hayworth evening consists of dinner at a restaurant followed by a movie.

What she reads over her morning coffee: All the newspapers and the comic strip “Terry And The Pirates”—whose characters talk exactly like her brothers, Eduardo Jr. and Vernon, who are in the Army.

Most boring daily task: Nothing. She doesn’t believe in being bored and whenever something makes her yawn she cuts it out.

What she’d look like if you called on her unexpectedly: Gorgeous, of course. Aside from that, she’d be dressed in whatever housecoat, dress or slacks had caught her eye as she came in her dressing-room door.

What the public hasn’t yet realized about Rita: That this beautiful girl, thanks to her natural tendencies and to her world-minded husband, is becoming one of the best informed women in Hollywood. Who else has attended two peace conferences—the Chapultepec one in Mexico City and the San Francisco one? And she’ll be attending more, right beside her husband!