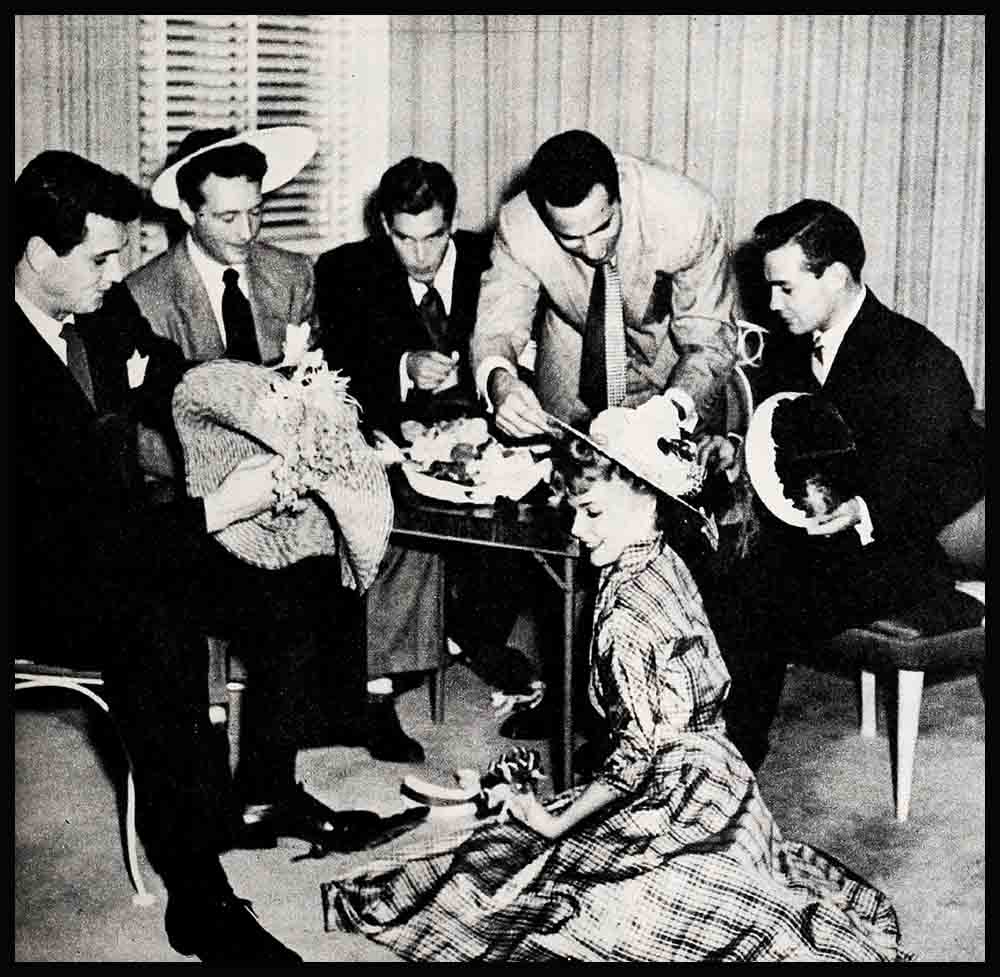 Parties are fun. And there’s no reason not to give them—even if your kitchen space is limited and your budget and leisure time more limited still.

Sally Forrest refuses to be put off by any time, space or money problems. Says there’s no need to. She gives pot-luck parties; an idea from her childhood, when her mother’s guests would contribute one item each to the menu.

When Sally gave her last party, she didn’t get in from the studio until after six o’clock. Quickly she showered, dressed and started setting tables. She wasn’t quite ready when her guests arrived at seven. But the candles were lit, the flowers were arranged and there were peanuts, popcorn, pretzels and potato chips to nibble on. The fancy type of hors d’oeuvres Sally dismisses—they’re too expensive to buy ready-made and it takes too long to prepare them.

When Milo Frank, Sally’s fiance, arrived, she broke him in right by enlisting his help. Together, they piled the silver on a huge tray and went the rounds of the little end tables and card tables that Sally had set up. For the buffet table, Sally used a lovely cloth from her hope chest. And Mrs. Frank. Milo’s mother, contributed her Spode Lazy Susan for a serviceable and attractive centerpiece.

Sally’s guests included Robert Clarke, Bob Patten and Coleen Gray, Jeffrey Hunter and Barbara Rush and Rock Hudson. Rock was held up at the studio, so Sally fixed his plate and placed it in the over until he arrived.

A practical girl, Sally, as well as a good hostess. To make sure her menu was balanced, she checked her guests the day before the party with suggestions as to what each should bring.

“Once my mother didn’t do this,” she remembers, “and practically everyone brought some form of macaroni or spaghetti.”

Sally’s contributions to the menu were O those it would have been difficult for her guests to transport: Salad (which must stay crisp in the refrigerator); hot biscuits, which had to be made at the last minute, and a wonderful strawberry Boston cream pie. Barbara brought string beans mixed with okra and tomatoes, Coleen contributed a veal goulash with macaroni. Sally, too, provided the coffee, and relishes of olives, pickles, tiny tomatoes and baby beets. Everyone came back for seconds and thirds. One of the nice things about a buffet is that guests feel they’re flattering the hostess, rather than being piggish, if they return for more.

After dinner, everyone helped to clear up the tables and stack the dishes which Sally left for the cleaning girl who was due the next morning. Then the games were on, among them one that was a real laugh-riot!

Sally had ransacked her closets for old hats and trimmings and had asked her friends to do the same. Everything was I taken apart and put in piles. Sally offered a prize for the best hat made by a man— and another prize for the best made by one of the girls. Quicker than you could say ‘Walter Florell” the boys were at work and simply loving it. They used the girls as models and there were occasional howls when one of the men used a pin like a nail. Milo, who did a dream thing for Coleen Gray, won first prize.

When the would-be milliners put their trimmings away, Coleen volunteered to tell fortunes. A palmist she had met when she was in England recently had taught her some of the tricks of the trade. For Sally and Milo she saw a long and happy life. Not that she had to be a seer for that—the love these two have for each other is written all over their faces.

While Coleen was telling fortunes, Bob told an amusing story about his stretch behind a soda fountain. One of his pictures was playing in a theater across the street. After the show a couple of teenagers came in for a snack. When they saw Bob, one of them did a double-take. “Gee,” she said, “You look just like the boy in the picture across the street.”

“How come?” she wanted to know.

It’s good to see the young crowd of Hollywood these days. They have their feet firmly on the ground. They look at movies as a business at which they intend to work hard. And, generally speaking, they live within their financial means and plan ahead.

As Sally’s party proved—you can do all this—and still have lots of fun!

Sally Forrest is in “Excuse My Dust,’ Barbara Rush is in “The Goldbergs,” Robert Clarke is in “Mother of a Champion,” Rock Hudson is in “The Fat Man,” Robert Patten is in “American Guerrilla in the Philippines,” Jeffrey Hunter is in “14 Hours,” Coleen Gray is in “Apache Drums.”

Here are the recipes for the food at the party:

2 medium onions, peeled and sliced and cook until onions are yellow and veal is very lightly browned, on all sides. Sprinkle with 3 tablespoons flour. Blend well.

Cover and simmer over very low heat at least 1 hour until meat is tender. Add more water, if needed.

STRING BEANS WITH OKRA AND TOMATOES

Saute over low heat about 3 minutes.

Cover, and cook over low heat 15 to 20 minutes until string beans are tender.