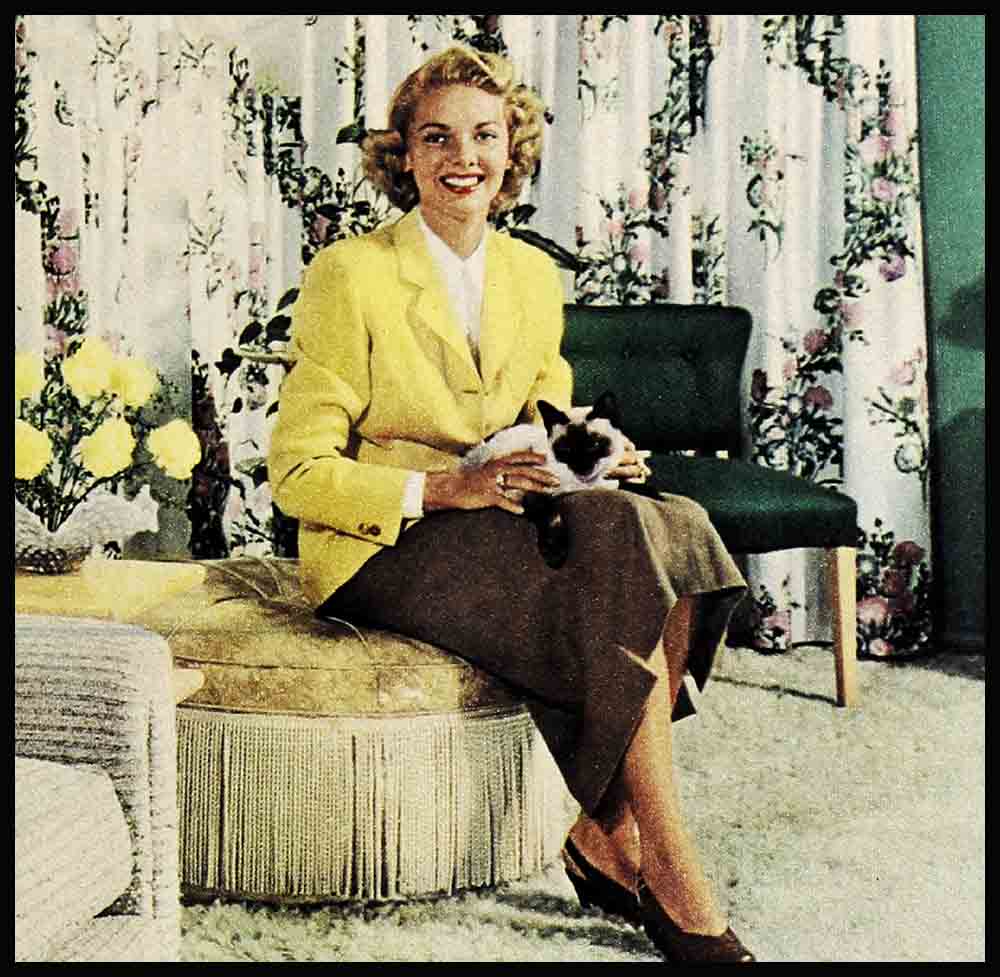 A Room Of Her Own

There comes a time in the life of just about every young American girl when she decides that the most glamorous and exciting thing that could happen to her would be for her to have her own apartment. Consequently you’d think that a young girl, well known on the screen, would at the first possible moment try her wings and fly out of the parental nest into her own private abode. Some do—but not Barbara Lawrence, who was last seen in “Peggy.” “Why should I do that?” she asked. “My room at home is practically an apartment, and I don’t have any of the chores of running my own place.” But more important, she pointed out, was the fact that it’s pretty nice to be with your own family, retaining privacy the while.

Barbara’s room looks as though it really belongs to her, a decorating precept worth noting. The strong, yet young, colors of dark green, pink and hyacinth blue flatter her blonde loveliness, and this was no accident. Decorator Gwen Carde, who was doing the entire house, picked up the scheme from a favorite dressing-gown of Barbara’s, one which was particularly becoming. Designed by Howard Greer, this dressing-gown is of a deep hyacinth blue wool, shot with silver threads, the collar and trim a watermelon pink. Among the fabrics which Miss Carde brought for Barbara to choose from was a glazed chintz bearing a pink carnation design with green leaves and touches of blue on a white ground. The pink and blue matched the dressing-gown to perfection, and so the room scheme was set. However, they featured the green and sublimated the blue, feeling that the blue in large quantities might be too overpowering to live with.

This same idea can apply to anyone choosing colors for a room. A home should be as becoming to the owner as are her clothes. So when you decorate, choose a favorite dress and let its color guide you to a flattering room scheme.

“But,” you may say at this point, “What about this apartment business? How can a room be an apartment?”

Well, Barbara’s room is large and the furniture is arranged so that the bed is the least conspicuous item. In fact it’s tucked away in a corner, and its white spread blends with the white wool shag carpeting. Next to it is a simple, modern night stand of prima vera (light-finished mahogany) and, contrasting sharply, an exquisite lamp with a delicate figurine base which is topped with a white nylon shade.

For the rest, her room has a complete living-room quality. An attractive love- seat, wearing a pink tweed cover, faces the door, and there’s a handsome, modern, prima vera desk at the left, against the wall. Above the desk a plain mirror hangs, giving depth to the room. Lest the effect become too severe and tailored, a couple of cherubim, Italian plaques, over the love- seat, add a note of whimsey, and the white, pink and gold lamp on the prima vera end- table is distinctly feminine. Since Barbara obviously doesn’t use her room for entertaining, she doesn’t need a lot of seating space; consequently a big, round, natural leather ottoman, plus a couple of nubby textured, green side chairs are adequate when a few of the “gals” come to hash over life’s complications.

A bank of windows circles the corner. Barbara put a minimum of furniture here so that the gay draperies can be pulled back easily to admit light and air. A modern tier table occupies the corner, flanked by one of the side chairs.

Furniture arrangement can make all the difference between an attractive and an unattractive room, and if Barbara had transposed the bed and the love-seat, or placed either of them in front of the draperies, the decorative effect of the room would have been lost. When you use logic and common sense in arranging your furniture, you’re on the way to a well-decorated room. Put massive pieces in front of large wall spaces, and balance them with another important piece on the other side of the room, or with a large grouping of smaller pieces.

Every room should have a focal point, and in most living rooms it’s the fireplace. But where there is no fireplace, one grouping should be the most important, so that your eye automatically travels to it first and then returns, rather than feeling torn between several groups vying for attention. In Barbara’s room, the love-seat’s the focal point, because it occupies the most prominent position in the room, and because it’s given extra emphasis by the end-table, the lamp and the white cherubim.

Another thing: Barbara’s room has the feeling of an apartment because it is divided into several sections, not by partitions, but by furniture placement. The bed in the corner takes care of sleeping; the love-seat and ottoman in the center are the living- room section; and the desk at the left is the work or study area.

The whole room is tied together through the colors set by the chintz draperies: the pink carnations with green leaves and touches of hyacinth blue on white ground, the pink repeated in the tweed love seat, the white in the wool shag carpeting and textured bedspread, with everything enhanced by the green walls and ceiling. And an extra feeling of richness is gained with the green velvet cornice, the pink tweed piping.

But so far, we haven’t even mentioned that all-important item in a young girl’s life, her dressing table. This isn’t part of the room. It’s in a corner of what could be a large closet. Barbara used this as a very handy dressing room, because another adjacent room houses her clothes and also serves as a sewing room. It’s long and narrow, tucked under the eaves of the house, with wardrobes lining one wall, a studio couch opposite, and a sewing machine at the end under the windows. Here, in front of the full-length mirror, Barbara can try on several costumes in order to get just the right one, and the sewing machine’s handy for minor repairs.

She is right down to earth in regard to this part of her domain, with no fuss or frills to complicate the dressing routine. She knows that at some time in the future she’ll put a skirt on the dressing table, but right now it serves well as is.

For her entertaining, Barbara depends upon the playroom downstairs. Formal parties or teas don’t interest her, but the playroom’s just right for a whale of a good time. Its decorative theme is Hawaiian, since the islands are a prime favorite with Barbara, and she brought back quite a few souvenirs, fancy hats, leis, and the like, with which to decorate the play room. Tapa cloth hangs at the windows for draperies, and the furniture’s made of rattan. The floor’s waxed for dancing, and there’s a radio phonograph. Comes any excuse for a party—someone arriving, someone leaving, a holiday—and the whole group’s there, ready for fun.

There were several reasons for featuring green in Barbara’s room. It becomes her, it’s restful and it combines well with the other two wanted colors, pink and hyacinth blue. But another reason is that green is used extensively elsewhere in the house.

Whenever you plan colors for a room, consider it in relation to adjoining rooms. A complete change, say, red in one room, green in another and blue in a third, is too violent a contrast and tends to chop up a house, no matter what its size. Whereas repeating the same colors throughout, getting variation through different proportions or different accent colors, gives a home smoothness and a feeling of tranquillity. In Barbara’s home, green is the dominant color throughout.

In the living room it’s combined with lime green, lemon yellow and brown, and the green walls and ceiling are rather lighter than the green in Barbara’s room. The lime green velvet couches that flank the fireplace blend into the lemon yellow carpeting, and the brown’s apparent in the bamboo-patterned draperies, with the same fabric used on the love seat. Some occasional pieces with a satin black finish have a Far Eastern feeling in the design.

The lemon yellow carpeting covers the floors in all of the rooms but Barbara’s, and helps make the entire house one decorative unit. The entrance hall ties in with its green-patterned wallpaper, and the dining room offers variation through brown wainscoting. However, the dining chairs repeat lemon yellow, and the draperies in this room include chartreuse in their coloring. The trend here too is slightly Eastern, thanks to the smart wallpaper that combines pink, beige and brown in a floral design. But a mahogany table with mirrored legs adds a modern touch.

The exterior of Barbara’s home is every bit as charming as the interior. The house is located on a corner in Westwood, near U.C.L.A. It’s framed by a white rail fence, and a brick path edged with rose trees leads to the front door. The style, a modified Monterey, characterized by the overhanging balcony across the front, combines stucco and brick, painted white. Pink shutters provide color, aided by pink geraniums in yellow pots. It’s restrained and altogether charming. You just know that nice people live here.