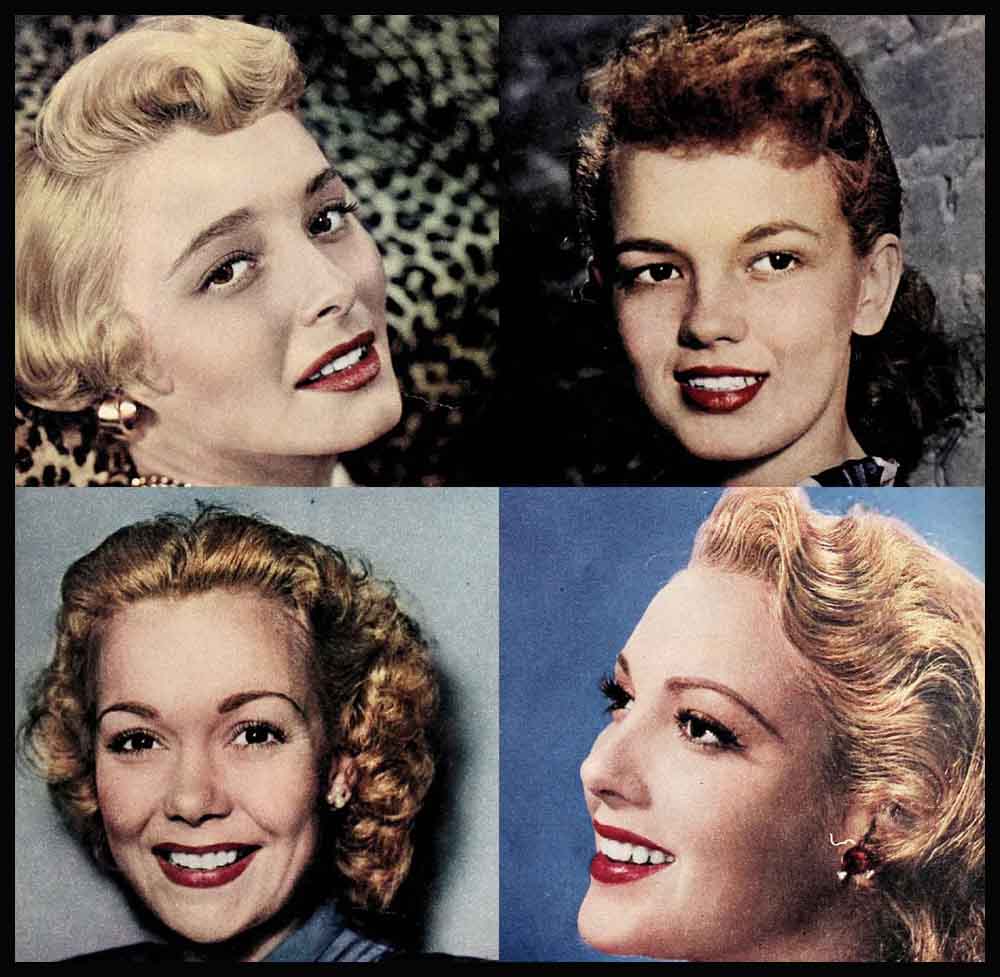 Mona Freeman still giggles when somebody recalls how uniquely glamorous she looked at Betty Hutton’s candlelight ball. On that enchanted evening, every beauty in Hollywood was in competition with every other beauty. But tiny Mona, arriving in a gown of bluish-gray chiffon, was the sudden center of all eyes. Cute Mona wasn’t cute that night; she was mysterious. Beauty whispered to beauty, “What’s with little Freeman tonight? She’s got something she’s never had before.”

For Mona had the softest blue color in her naturally golden hair. In the gentle light of the candles it gave her the same soft flattery that the blue-gray of her floating chiffon gown gave to her.

And the wonderful part of it was that Mona had that color of hair only since four o’clock that afternoon and she was her natural blonde self again the next morning just as soon as she had a shampoo. It was a simple rinse that gave her hair that soft blue sheen.

Dyes, tints, rinses—they all change the color of your hair. And they’re all the Hollywood rage. With reason! For these newly perfected hair colorings mean no girl has to go through life with mousy hair! You can pep yourself up experimenting once in a while with rinse colors, for instance, just as you experiment with lipstick colors.

Of all these colorings, a dye lasts longest. But it is also more difficult to apply.

Joan Evans dyed her naturally very dark brown hair before she made “Roseanna McCoy.” It was agreed that a reddish gold shade of hair would photograph more flatteringly. This dye job took about two weeks and Joan found she had to have a touch-up every four or five days. Now, she has gone back to her natural shade. But whether Samuel Goldwyn will let her stay dark is her current worry.

Linda Darnell dyed her hair, which is truly black, for “Forever Amber.” She had to go to the Anne Meredith shop in Beverly Hills every single day for three solid weeks before she could go from black to the necessary blonde. And she had to have a touch-up job every two days. Never, Linda says, will she go to this hair extreme again.

In the experience of these two, however, there s a good lesson to any girl wanting to make any such radical change in appearance. To be faced squarely are the expenses of the original job as well as the cost and nuisance of the upkeep.

It’s a rare blonde who wants to turn brunette. (Don’t let Joan Bennett fool you. She didn’t “dye” herself dark. She just started as a blonde in pictures—but with a bleach job. She really is brunette.) All the brunettes who want to go blonde, however, should ask themselves: Have I blonde skin? Pat Neal, for instance for all her dark brown eyes and naturally dark brown hair, has very white skin. Therefore, she made a ravishing blonde. Right now, Pat has revolted against lightness—but it’s my private hunch she’ll be talked into being blonde again, because it really does give her personality more distinction. Jane Wyman remained blonde for a long time after she dyed for The Yearling.”

On the other hand, when Ruth Roman briefly tried being blonde she looked just terrible. That’s because she has olive skin. So before you so much as make the beauty shop appointment, examine your skin tones. If there’s a theatrical shop of: any sort in your town, it would be smart to go there and try on wigs. These will give you an idea as to whether a white gold, red gold, or red red would be most becoming.

Next, if you don’t know the dye and your particular beauty operator’s work, take a dye allergy test. This is easy. Just put a drop of the dye on a patch of skin right behind either ear. Stick a bit of tape over it and wear it overnight. If your skin is blotched next morning, don’t dye.

Take time to get the right dye job. If the change is radical, it will take several days, or even weeks. Don’t rush it. Otherwise you’ll just have a head of straw. Also, don’t have it dyed in those few days of the month when you’re not yourself.

Not too long ago, the subject of hair coloring was very hush-hush. On the market there were only henna and some quite bad dyes. But today the dyes have come under the ruling of the Food, Drug and Cosmetic Act, and unless a girl is allergic to some particular one or the other, they are perfectly harmless.

Tints, which are about half the strength of dyes, follow much the same rule as dyes except that they will only last two or three weeks, whereas dyes, if the color change isn’t too radical, will last six or more. Tints are much safer for you to use at home. And here’s a funny thing, tints take better on rather dirty hair. You wash your hair at the end, naturally, but don’t shampoo one day and decide to tint the next. Tints are especially good for those who want to conceal a few gray locks. After all, there’s no radical color change involved there.

For the mature, the best way for selecting a tint color is to choose one just one shade lighter than your natural hair used to be. In between tint jobs when a few gray hairs show along the temple line, you can, if you’ve dyed your hair a light or dark brown or a black, touch these hairs up with mascara. It won’t last there any longer than it does on your lashes but it’s a smart deceiver for day or evening.

Tints are mostly “intensifiers.” Greer Garson’s naturally red hair gets “intensified” with more red. Remember with tints or dyes that shampoos cut off the color. So don’t shampoo too often. Also, in rinsing your shampoo, use lemon or vinegar to cut the soap. And be sure to use a shampoo made of soap, not detergent. There are many more detergent shampoos on the market than soap ones—but the labels have to tell you which is which.

The rinses are really fun. Liz Scott, a natural blonde makes herself look ash blonde by a little blue tinting. Betty Hutton, with baby fine, almost white gold hair and perfectly natural, used a blue- gray rinse in Dream Girl” to give her that dreamy effect. Joan Crawford suits her mood, her gown and usually her escort—and is sometimes dark-brown-haired, red-haired, golden-red-haired, all in the course of three or four days.

With a rinse you do need perfectly clean hair and the best rule is to have some of the rinse in the preliminary shampoo. After the shampoo, do a complete rinse job. Let your hair dry naturally, without using a towel (because the rinse will rub off on the towel). When your hair is almost dry, but not entirely so, set it.

Look at the effect. On a gloomy day, when you haven’t got a date, to see that lively gloss on your hair, will probably pep you up as much as your facial makeup always does. The color will last till your next shampoo.

Also, for special occasions, some of the blonde stars powder gold dust in their hair. Shelley Winters, for instance. She buys a bottle of gold dust at an artists’ supply store (it costs about twenty-five cents an ounce) and simply powders it on. Only take warning. If you try it, cover up your face as nearly as you can. (A Hallowe’en mask, if you have one, is a fine idea.) The gold dust, you see, will float down on everything—your clothes, your room. So wrap up, cover up and preferably do your gold-dusting in the bathroom. But the effect, if you are a blonde by nature or peroxide, is slightly out of this world.

So wash that glamour right into your hair and send the doldrums on their way.