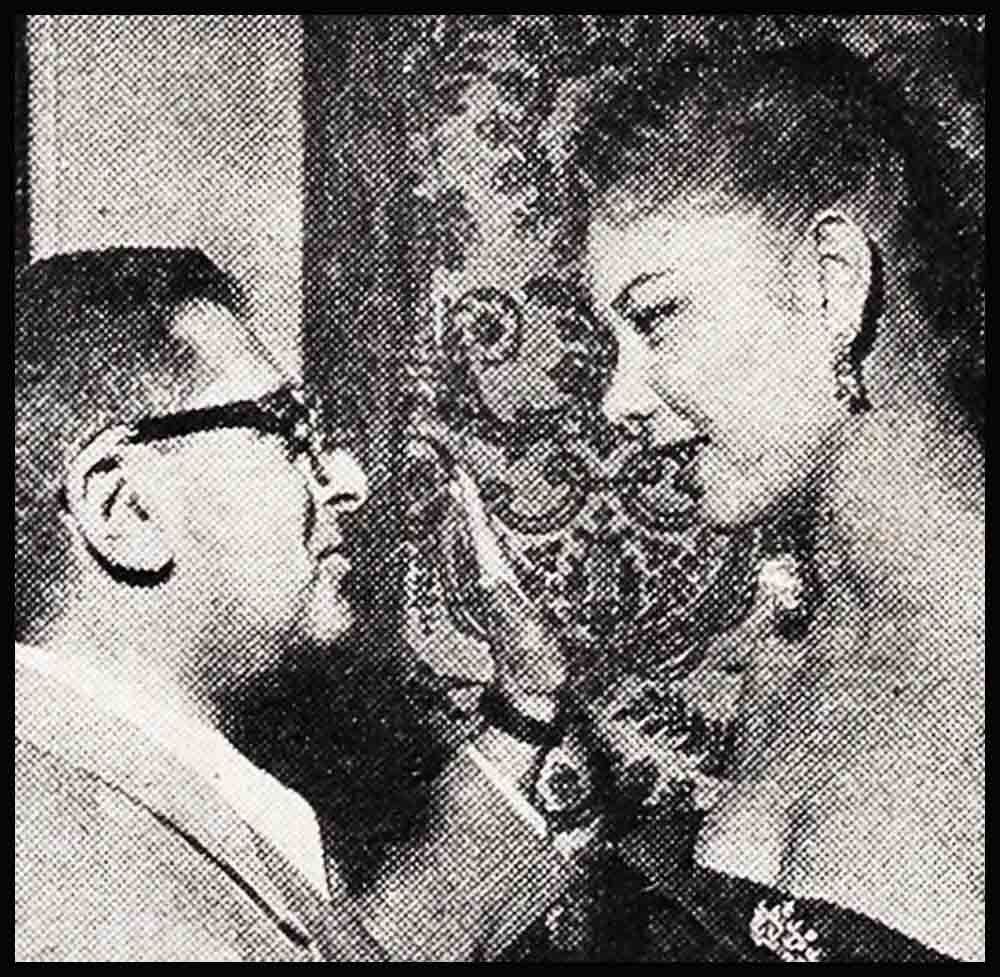 I think Anne Baxter was much sexier when she wasn’t trying so hard to be sexy. . . . Johnnie Ray looks like a sad Howard Keel. . . . I can remember all the way back to yesterday, when the bobby-soxers used to toss their socks at Van Johnson. . . . I go for Gloria Grahame but I admit she puzzles me. I never feel I’m making contact. . . . Terry Moore doesn’t drink or smoke. “I’m a Mormon,” explains Terry, “but I have fun!” . . . Believe it or not, Jane Russell has a well-developed sense of humor.

When Joe DiMaggio asked Marilyn Monroe what she thought about when she kissed the her o in a movie, The Monroe told him: “You’re not thinking of anything when you kiss in the movies.” . . . Cameron Mitchell wears sneakers playing the role of the millionaire in “How to Marry a Millionaire.” One guess whom he’s impersonating. . . . Susan Hayward sleeps in silk pajamas on silk sheets and has a silk-satin blanket. Susie has the pajamas, sheets and blankets in set s of different colors. And she changes colors with her moods.

Shelley Winters is the most honest actress in town. She’ll even admit: “I get bursts of being a lady, but they don’t last long.” . . . Richard Burton told me: “Half the satisfaction of being an actor is getting away from your own disgusting self.” The other half must be the money. . . . I generally don’t like playful dolls, but Jean Simmons is an exception. Jean ripped Stewart Granger’s T-shirt to make him look like an English Brando. . . . Jeff Chandler should be getting more important roles.

Lana Turner, who doesn’t like to wear sweaters, can wear a suede jacket and make it look like a sweater. Betty Hutton likes to appear enthusiastic about everything. . . . I still get a thrill at the view of Hollywood at night from any hilltop house. . . . Corinne Calvet is becoming more familiar with English. She even talks English when she talks in her sleep. . . . I believe I could even like Zsa Zsa Gabor if she treated George Sanders nice all the time. . . . I have yet to hear another actor say an unkind word about William Holden. . . . I thought that with TV the movie newsreels would improve, but they haven’t.

Hedy Lamarr should be acting in pictures, not negotiating. . . . Rosemary Clooney no longer tries to keep secrets. “After you’re a star, they know everything.” … I have yet to get excited about an ice skater. and this goes for Sonja Henie. . . . Wonder how long it’ll be before Katy Jurado gets a role that fits her like her part in “High Noon.” . . . Rock Hudson is a solid sleeper. Even an alarm clock sitting on a dishpan doesn’t awaken him…. At the photoplay Awards, party, Mitzi Gaynor rushed up, kissed me and said: “You always write such nice things about me.” I can’t remember what, but this is meant to be nice too, Mitzi.

My idea of a movie queen is still Joan Crawford. When working in a movie, Joan keeps herself generously dabbed with perfume, and always puts on a fresh supply at four in the afternoon. “It gives everybody a lift,” she explains. . . . John Ford has this motto in his office: “You can never teach another person anything. You can only show him how to learn it.”

Katie Grayson hates to get romantic because she generally marries the fellow. As Katie puts it: “I’m never a bridesmaid, always a bride.” . . . All English movies aren’t great and TV proves it. . . . Rita Hayworth’s sex appeal is beginning to elude me.

Lauren Bacall told me that when she was having a friendly argument with Bogart about acting, he suddenly ran out of the room. Then he returned with his Oscar, slammed it down on the table and said, “See? This proves I’m right!” . . . Dinah Shore or Connie Russell, just standing still singing a song, send me. . . . Movie fans: a boy and girl who go t o a drive-in theatre on a motorcycle. . . . Marie Wilson believes it’s all right to talk to yourself as long as you don’t listen. . . . I like Tony Curtis’ advice to newcomers struggling for stardom: “If a schmo like me can do it, anybody can do it.”

Charles Laughton claims an actor who can put over a subtle emotion with his back facing the camera is a real credit to his profession. . . . Kirk Douglas wears only the bottom of his pajamas. You see, he bares his chest in bed. too. . . . There’s no actress with less pretense than Shirley Booth. As a grip on “Come Back, Little Sheba” put it: “If you rolled out the red carpet for her, she’d look around to see who it was for.” . . . Elizabeth Taylor believes that most women try to look too fancy in bed. . . . I must tell you that Lurene Tuttle and her daughter, Barbara Ruick, are in “Affairs of Dobie Gillis.” And that Miss Tuttle is playing Debbie Reynolds’ mother because she wasn’t the type for Barbara’s mother! And that’s Hollywood for you!