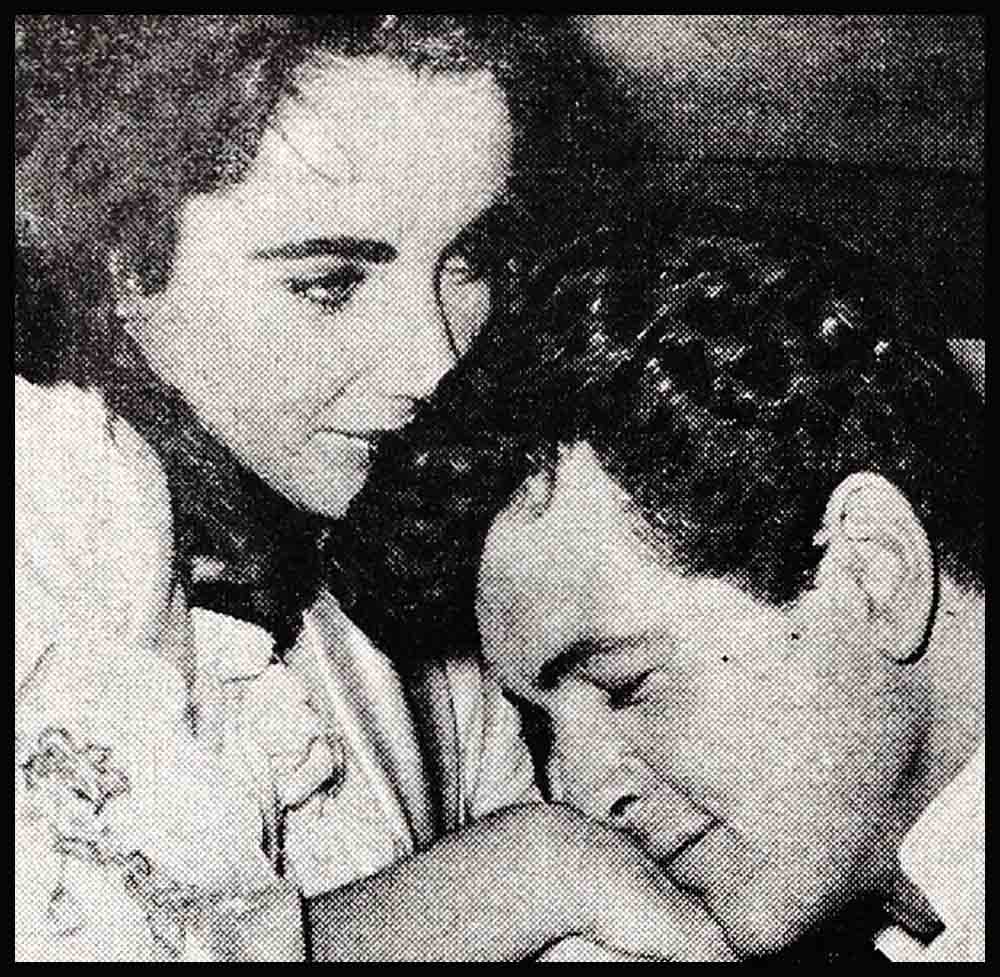 No one but Cecil B. DeMille could have made this epic, the story of Moses. The cast is firmly dominated by Charlton Heston, as the great Jewish leader, and Yul Brynner, as the Pharaoh jealous from childhood of the boy raised as foster son of a princess (Nina Foch). Among the vast panoramas and dazzling camera magic, the human element is further strengthened by an array of stars, including: Anne Baxter, as the princess who covets Moses; Yvonne De Carlo, as the shepherd girl who becomes his wife; John Derek, as the brave Joshua; Debra Paget, as his sweetheart; Edward G. Robinson, as a Jewish overseer who helps Egypt persecute his own people, but must go with them on the mighty Exodus. FAMILY

Around the World in 80 Days

It’s colossal!—and it’s sheer, wonderful nonsense, never taking itself seriously for a moment. This sparkling version of Jules Verne’s classic casts David Niven as the pompous British hero, who bets (back in 1872) that he can circle the globe in eighty days. With him goes Mexico’s great comedian Cantinflas, as his resourceful valet. And the party becomes a trio when they rescue Hindu princess Shirley MacLaine from a fiery death. One mad adventure follows another; breathtaking scenes shot all over the world sweep across the huge screen, to rollicking music. But the human scenery’s the big surprise. Forty-two top stars of several nations do bit parts with gay good cheer; famous faces keep cropping up casually. FAMILY

Broad in scope, serious in purpose, the movie based on Edna Ferber’s novel provides satisfying entertainment. Guided by producer-director George Stevens, Rock Hudson and Elizabeth Taylor do their finest work, while the late James Dean has a fascinating role. Liz arrives in Texas as Rock’s bride and is taken aback by her new home’s crudeness, the submissiveness expected of women, the prejudice against Mexicans. Parallel to the story of her marriage goes Dean’s rise from cowhand to oil millionaire. The grown children of Rock and Liz bring up problems, as Carroll Baker is infatuated with Dean, Dennis Hopper marries a Mexican. FAMILY

The Teahouse of the August Moon

Quaint charm animates this comedy of American occupation forces and Okinawan natives. Likable in his officer role, Glenn Ford takes command in a small town. He’s greeted by interpreter Marlon Brando (in convincing Oriental make-up). As Glenn prepares to use American know-how. the villagers hand him a variety of presents—including a geisha, exquisite Machiko Kyo. He can’t diplomatically refuse the gift, and his efficient plans go awry. He starts building a tea-house for the geisha, with help from the Army. Then headquarters sends psychiatrist Eddie Albert to find out what’s happened to Glenn. FAMILY

When Helen Hayes joins Ingrid Bergman, the screen goes electric with acting power. Though the picture belongs to its feminine stars, Yul Brynner makes an attractive rogue. A member of Paris’ Russian colony, exiled from the Sovietized homeland, Yul helps circulate the rumor that Grand Duchess Anastasia survived the slaughter of the royal family. If he can find a plausible Anastasia, perhaps he can get his hands on the fortune left to her. Ingrid, a haggard derelict with a clouded mind. is groomed for the role and comes to believe in it. But the verdict must be given by Miss Hayes, as the sad, tough-minded old Dowager Empress. FAMILY

The Girl He Left Behind

Tab Hunter gets into uniform again, with a role to match his “Battle Cry” hit. And Natalie Wood. his co-star in “The Burning Hills,” now appears more her sprightly modern self, as a sensible girl who won’t marry Tab until he’s really grown up. Self-assured, thoroughly spoiled by mama Jessie Royce Landis, he flunks out of college into the arms of his draft board. The reluctant GI proves no asset to the peacetime Army. Recognizing that the boy is no coward, his superiors try doggedly to make a soldier out of him. Murray Hamilton draws the best laughs, as a sarcastic sergeant. FAMILY

If all the guys in the world behaved like the guys and dolls of this enthralling movie, the world would be a wonderful place to live in. The spoken words are in French, German, Norwegian (with English titles) and American, but the story has deep humanity appealing to everyone. Off the coast of Norway, a small French fishing boat is in trouble, its crew falling desperately ill, one by one. When the regular radio conks out, the captain uses his “ham” set to appeal to any other amateur operators who may hear him. His distress signal is picked up in French Equatorial Africa, where a doctor diagnoses the sickness and prescribes a serum that must be delivered by the next morning—or the men will die. Through other “hams,” an eager teenager in Paris and a blinded war veteran in Berlin, the rescue mission goes on, with a Polish airlines hostess and American and Norse airmen also getting into the act. FAMILY

The material is familiar, but good details and the imposing presence of Fess Parker give conviction to this pioneering yarn. Fess serves as both doctor and scout for the Oregon-bound group, with stalwart Jeff York as his fellow guide. Dealings with hostile Indians take an unusual twist when a chief wants to adopt the blonde kid sister of Kathleen Crowley, who is Fess’s beloved. Her teen-aged brother and a little Sioux boy are also involved in the tense climax, giving the story extra interest for small fry. FAMILY

Everything but the Truth

Cute kid, able actor, little Tim Hovey gets himself into a pretty fix in an amusing but meaningful comedy of politics. Running for temporary boy mayor of his town, orphan Tim hits civic corruption by repeating an indiscreet remark of his guardian, who’s given a $10,000 kickback to the town’s real mayor on a real-estate deal. all concerned beg Tim to say he lied, but schoolteacher Maureen O’Hara has taught the boy too well. He insists on sticking to the truth, though he’s suspended from school. Enlisting columnist John Forsythe’s aid, Maureen turns Tim’s cause into a national crusade. FAMILY

David Niven makes every meek commuter’s dream come true in this gentle worm-that-turns story. Accountant Niven and his equally stuffy wife (Dorothy Alison) have been boring each other quietly for years. But after he shares a rainy-day cab with a saucy French model (Genevieve Page), his Outlook suddenly changes. Assigned to check the books of two hosiery companies, he decides to juggle their accounts slyly. The failing firm of lovable old Ronald Squire is made to look like a great success; the booming modern outfit of smug Howard Crawford apparently verges on bankruptcy. Obviously, Niven’s little adventure is headed for disaster. But it’s fun while it lasts. ADULT

Man in the Vault

As hero of an action yarn, William Campbell has the usual chores: bashing and getting bashed; playing around with a couple of good-looking dames. A skilled young locksmith, Bill has an offer of a shady job from petty racketeer Berry Kroeger, who wants to get at the cash-loaded safety-deposit box of his boss. At first, Bill virtuously refuses the assignment, but he has to give in when sweetheart Karen Sharpe is threatened. Anita Ekberg slinks in and out of the proceedings, as girl friend of a big shot. and Mike Mazurki’s a strong-arm man. ADULT

Good intentions are the best angle of this Guy Madison vehicle, a Western with solemn solicitude for the Indians’ cause. Arriving in a frontier town to file the deed for nearby ranch land he has just bought. Guy finds himself in the middle of a dangerous situation. His neighbors. three murderous brothers, have just been cleared by a prejudiced jury. though everyone knows they lynched two young Indians. Guy refuses to take sides in the following controversy, and soon his reason is revealed: His mother was an Indian, deserted by her white lover. He conceals his ancestry, because it would prevent him from owning land. In his final choice, he’s influenced by two girls: Felicia Farr, whose allegiances waver; Kathryn Grant, a courageous Indian maiden. FAMILY

Red Skelton needs all of his demonstrated showmanship and gift for clowning to cope with a creaking plot. A bright-eyed innocent. he blows his savings (mostly deposited by fiancee Janet Blair) on phony stock peddled by Allyn Joslyn, Benny Baker and Vivian Blaine. When Red realizes he’s been gypped. he goes after the crooks. but they persuade him that they’re working undercover for the FBI—and draft him as a “G-man.” They even maneuver him into jail. and this development gives rise to a genuinely funny sequence of good old-fashioned slapstick. as Red does a jailbreak with the wholehearted connivance of the law. FAMILY

Curucu, Beast of the Amazon

Take it as a travelogue, and it’s a feast for the eyes. Filmed in Brazil, it ranges from Sugar Loaf Mountain and the modern magnificence of Rio de Janeiro to the jungles along the Amazon and remote, seldom-seen waterfalls. As a melodrama, it’s something else again. Plantation foreman John Bromfield loses his workers when they flee in superstitious terror from a mysterious killer, a clawed and feathered creature that might have come out of an Aztec legend. Determined to track the Thing to its upriver lair. John sets off with an Indian guide (Tom Payne) and an unwillingly accepted lady partner. This is Beverly Garland. American doctor who is attacked by every menace of the jungle, from headhunters to a boa constrictor. FAMILY

Carol Lynley: “I Know They’re Talking About Me Behind My Back”

Kerry Smith: “For Four Hours, I Was Gardner Mckay’s Wife”