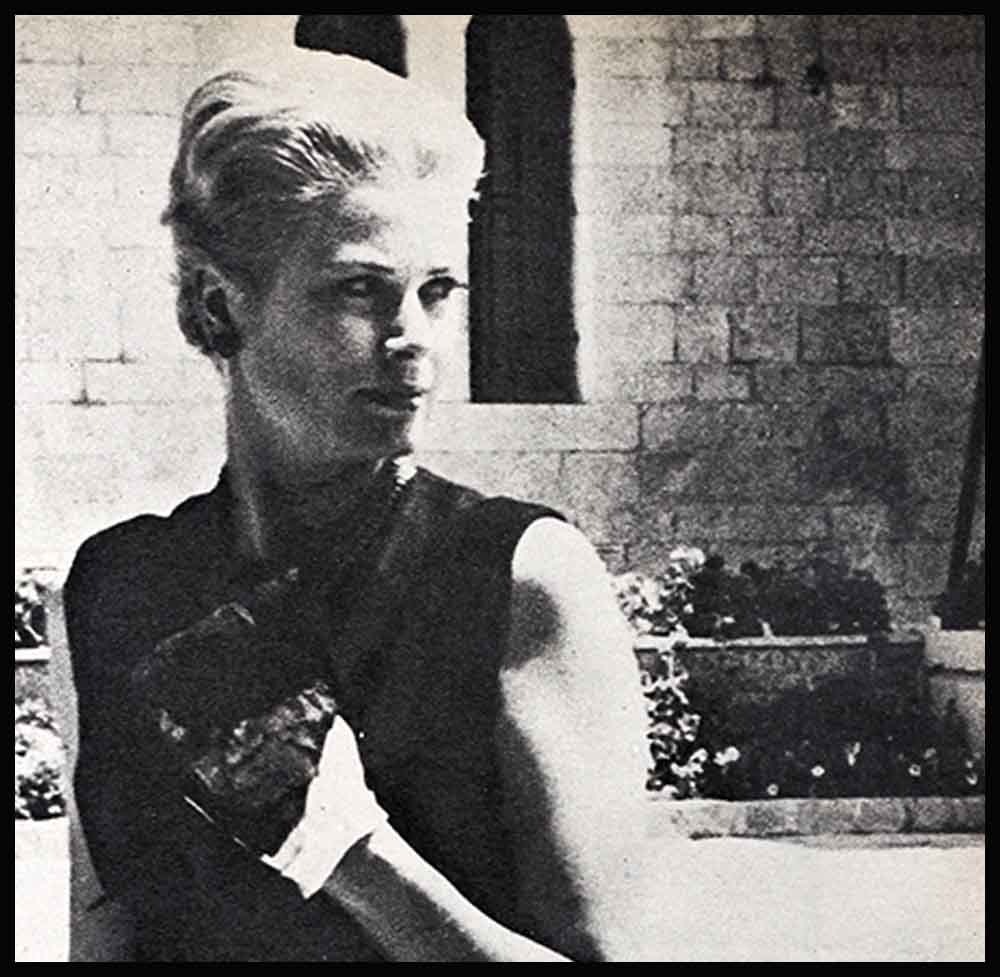 Tempest In A Tourist Trap

The rain beat down mercilessly on the border between Monte Carlo and Beausoleil. It was midnight, October 12th. Suddenly, out of the night, the roar of engines cracked the eerie stillness. This was the might of the Fifth French Republic rumbling into strategic position on the border separating France and Monaco. Word spread like wildfire in the famed gambling casino. In minutes, hundreds of Monegasque citizens and visitors slipped on their raincoats, opened their umbrellas and hurried through the drenching out pour to see if the reports were true. Had France truly sealed off the border? Mais oui!

Indeed, it was true! The strength of French president Charles de Gaulle had at last asserted itself. Monaco was isolated from France! The crisis had come, descending in the classic European manner—at midnight!

The show of force was terrifying. Monegasques gasped in abject horror at the five huge motorized units that were driven up the narrow Street of Beausoleil and halted at the very doorstep of the tiny principality. It is true, the vehicles were not tanks. Nor were they some new and fear- some form of military equipment. Yet Monaco’s citizens could not have been more alarmed if France had indeed brought such weapons to that front. Actually, the motorized units were nothing more than house trailers. The blue uniformed men inside them were not soldiers—but custom guards. A mighty contingent of six! And they had come fully armed—with custom forms! Mon Dieu!

The gathering of Monegasques at the border stood in stony silence and gazed incredulously as one of the guards trudged to the middle of the rain-splashed Street and posted a sign. It read: “HALT! CUSTOMS!”

At last the hour dreaded by Monaco’s 22,000 residents had arrived. The French Ministry of Finance and Economic Affairs had thrown up its threatened customs barrier around tiny Monaco. Now, indeed, it was sealed off from the rest of the world!

The moment of truth was at hand for the realm of Prince Rainier III, descendant of the Royal House of Grimaldi. a dynasty dating back to the 13th Century.

Startling as it was, the action was not totally unexpected. France had given Monaco ample warnings that it would impose drastic economic measures to stop the practice of giving 7.000 absentee Frenchmen and scores of French business firms an official haven in Monaco as a means of dodging taxes in their own country.

For six months, France and Monaco had been at swords points over this issue. It had prompted Prince Rainier to abandon his suaveness and royal dignity and to hurl bull-like invectives at the French government. It made him vow to fight de Gaulle to the finish.

To the outside world. Rainier’s tack had p comical aspects. Here he was, ruler of a 368-acre country with an army of eighty— the entire military strength at his disposal—defying de Gaulle, head of a nation of 45.000.000 with a land mass of 212.659 square miles (not acres), and an army of a million—not to mention the overwhelming air and sea power at his command. There was no question in anyone’s mind that France had only to sneeze to obliterate Monaco. But Monegasques bravely hacked their ruler’s stand of defiance. They liked Rainier’s courage. It was like in “The Mouse That Roared.”

But de Gaulle wasn’t frightened! After all, he had tangled with the mighty red bear which is Russia. He had even warned that he would fight a war with Russia if necessary to protect France’s sovereignty. No, de Gaulle was not intimidated by Rainier’s bravado. The beachhead of customs trailers established on Monaco’s border at midnight was proof of that.

Now no one could enter or leave the little land without declaring property or possessions they were bringing in or out of Monaco. Alas for the Monegasques!

And where was Rainier?

The blockade came at a most inopportune time. At that very hour. Prince Rainier was out of the country. Of all places, in Paris—the “enemy” capital—where the order to seal off Monaco’s border had come from.

But the Prince, as well as Princess Grace and their children, all on a short vacation in the French Capital. were in no danger. No armed guards came to stand at the door of their hotel suite. No restrictions were placed on their movements. They were free to come and go as they pleased.

It was barely minutes after midnight when the phone rang in Rainier’s Paris suite. It was Monaco calling, to inform the Prince of the crisis. Without a moment’s delay, Rainier kissed Princess Grace goodbye and bravely flew home to take command. No sooner was he back, than he went on the air to renounce de Gaulle’s drastic action and reiterate that the tiny principality could not accept France’s demands to levy taxes on foreigners and on foreign corporations without jeopardizing Monaco’s economic future.

“It is our duty,” said the Prince, “to defend the position of the foreign residents who, in good faith, have established themselves in the principality. How can we even conceive of abandoning them?”

He termed the border harassment an unfriendly act “but not very extreme,” and said he was ready to resume negotiations with France at any time.

The implication that France could have done worse to Monaco was obvious. President de Gaulle could have invoked absolute border Controls had be wanted. That would have meant stopping all traffic, cutting off all water and gas and electric power which comes from France, halting the railroad and setting up a sea blockade. Monaco could have been crippled.

As it was. the French customs guards folded their house trailers and drove away after five hours of duty at the border. They returned later, then left, then returned again. It was, in effect, a sample harassment designed to show Rainier that France means business. And to demonstrate what France can do if His Highness doesn’t yield to de Gaulle’s demand to impose a 40 per cent tax on the earnings of Frendi companies in Monaco.

The crisis brought Princess Grace and the children back the next day to find the French security forces on duty guarding the border of their domain. As she came out of the railroad station accompanied by the children, their nurse, and a French poodle, Princess Grace cast a wary eye at the guards and their house trailers parked along the border.

Three uniformed customs officers stood at a sheltered bus stop on a road curving along the rocky hillside leading from France. The other three guards were posted on the beach below the Monte Carlo Casino, where another customs check-point had been set up.

Her face reflected her anxiety, for the situation was a far cry from the happy, care-free day in 1956 when she arrived from Hollywood to the rousing welcome of thousands, cheering her forthcoming marriage to the Prince.

Now it was deathly quiet. There was no joy in the Street. Only sadness.

A few shopkeepers approached Grace as she came out of the station. She smiled at them. They returned polite but strained smiles. One of the shopkeepers was a spokesman for the group.

“Your Grace,” he said, “this is a terrible thing. This move by France will kill us. Already the tourist business has dropped.”

Princess Grace was well aware of the crisis. She had known it was coming for six months, since April 11 when France declared it was renouncing the main agreement governing relations between the two States—unless Monaco yielded to Paris’ tax demands.

In fact, the impending threat by France had prompted Grace to turn an eye to Hollywood for the first time since her retirement from films to become a real-life princess. At that time, the palace had announced that Grace would return to Hollywood to make “Marnie” for Alfred Hitchcock.

In an exclusive story in Photoplay, we reported to you that Grace was forced to make a movie comeback to win back the royal family’s waning popularity with its citizens. We concluded that her return to movies was, prompted by a desire to fortify her husband with stronger Monegasque backing in his dispute with de Gaulle. Any increase in the admiration for the House of Grimaldi could have served as a deterrent in France’s efforts to foist its will upon Monaco, for world opinion would have weighed heavily in Rainier’s favor.

No movies after all

But Grace then suspended her plans to return to movie-making. No clear account of why she would not make the picture was given. Rumors flew up and down the Cote d’Azur. There was one report that a mysterious Vatican envoy had come to Monaco to plead with the Princess to give up her film plans. Another rumor was that some citizens were resentful. The French newspaper Paris-Press quoted Monegasques as saying, “We want a Princess, not a film star.”

Semi-officially, the excuse was that Hitchcock was busy doing another film at the time.

Actually, as things stood then and as they stand now, Princess Grace is in a real bind. It would appear she is damned if she does and damned if she doesn’t. But now, more than ever before, Monaco’s days seem numbered and the royal family’s future is in grave peril. No, there’s no danger France will drop parachute troops to capture the gambling casino or send the French fleet steaming from Toulon towards Monaco. Nor is it likely that Rainier and Grace will have to flee in Aristotle Onassis’ yacht after a final frantic appeal to the United Nations and Elsa Maxwell has failed. But in light of the controversy that has brought France and Monaco to grips, there is now a distinct possibility that Europe’s last absolute monarch may be on the way out. It isn’t likely de Gaulle will yield on his demand for imposts on French citizens who have taken refuge in Monaco’s tax-free structure.

If and when that 40 per cent bite is levied, what will it do to Monaco’s economy? Can this little nation survive or will it be driven into poverty?

Neither the tourist business, which gives Monaco a hefty income, nor the profits from its fabulous gambling casino can support the tiny country, small as its annual budget may be. It must have the income it derives from the industries and businesses that have settled there in sanctuary from French taxes.

That is why the ludicrous cry has arisen:

“Rainier is prepared to defend the inalienable right of any Monegasque to evade taxes!”

The economic advantages in the attendant spending by citizens and firms of France who have made Monaco their headquarters is vital to the country’s economy.

And that is why Prince Rainier has drawn himself up to his full five feet nine inches, with his brown eyes blazing in anger, to wage a bitter war of words with de Gaulle and his mighty nation.

If he loses, it may well be the end of Grimaldi’s reign—the point d’appui, as the French say, which will send him and Grace into the long, lean ranks of ex- Princes and ex-Princesses from European royalty.

But it isn’t as bad as it seems.

Like few other former monarchs, Prince Rainier and Princess Grace will have a place which will welcome them warmly and with open arms.

That place is America.

America is home for Grace Kelly.

And it can be a welcome home for Rainier and for their children.

Here they can enjoy ali the advantages of Monaco except one—

In this country they’ll have to pay taxes!