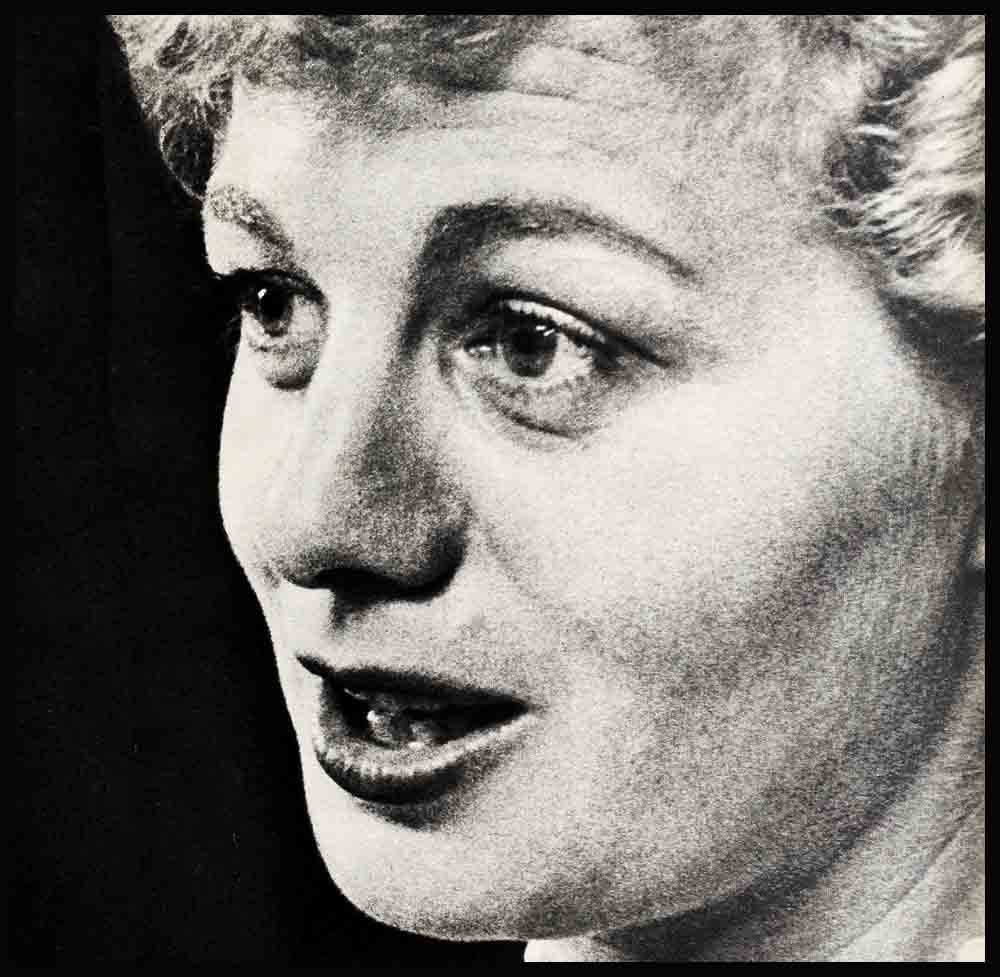 Shelley tried desperately to relax. It had been a long hard day. Rehearsals on her new play seemed to drain her strength. Her body felt tired, she thought, as she sat in Sardi’s waiting for dinner to be brought to her usual table. And . . . she waited for a long distance phone call from Tony, a call that was already fifteen minutes overdue. Shelley leaned back, shut her weary eyes, thought of Tony. From the next booth, drifting almost in a whisper, came the words, “Shelley’s had it. Tony’s about to dump her. In fact . . . he already has. For a younger girl.” Shelley kept her eyes closed as long as she could, so the tears would not give her feelings away. She tried not to believe what she had heard, and she tried her best to control her temper. The whispers continued for a few short moments, then realizing suddenly that it was Shelley Winters sitting behind them, the party at the next table became silent. As blithely as if she had not heard a word, she smiled to a passerby whom she knew casually. But then she had to listen to the inevitable question:

She beamed bravely for all the world to see.

That night she called a long time friend. “What will I do? I’ve tried everything. “Without Tony, life isn’t worth it. I . . . I don’t know what to do.”

The friend tried to calm her with light talk, the latest joke, a bit of show-business gossip, anything to take her mind off Tony. But it was no good.

There was a long pause, and Shelley knew that her friend chose not to hurt her by repeating the rumors.

Tony was not alone

That night Tony Franciosa smiled across a satin-smooth tabletop at Chasen’s, the smart restaurant where the current movie favorites sat up front, but the old-timers, a little worn around the edges and out of demand for pictures, were exiled to the back tables. There the service was slower and the waiters’ smiles less congenial. But for Tony the table was front and center. And opposite him, sipping slowly on a cool drink, was vivacious Judy Balaban. Her dark brown hair was smartly coiffed, her nail polish was a fire-glow red, her costume was perfection. She smiled slowly, an inviting Mona Lisa smile. Tony took her smooth hand in his and held it for a long time. The soft strains of romantic music played about them. And a roomful of glamorous heads watched them . . . exactly like schoolkids peeking in at a door marked “private.”

The next morning, along Sunset Boulevard where the starlets try to make a fifteen-cent coffee at Schwab’s last for hours, the word was out:

The word had been passed along earlier in the plush sanctums of Bel Air and Beverly Hills where the elite meet. In New York the Sardi’s set and the Downey’s crowd pored over the columns and commented on the Shelley-Tony split.

Director Frank Corsaro, long a friend to both, said to another friend: “They’re both high strung, but they always get together. We’ll see.” Frank had directed “Hatful of Rain,” the play that brought the two together, first as stage lovers, then offstage lovebirds. He was hopeful for them. But others weren’t. An actress who had worked with Shelley and knew her well said: “She acts like a ‘character’ to hide her insecurities. But I know that this is killing her. I talked to her a couple of weeks ago and it doesn’t look good.”

How had this all come to pass? How had yesterday’s bright and shiny romance deteriorated into today’s losing battle? It began with another lost love, when Beatrice Bakalayar Franciosa filed for divorce from Anthony Papaleo Franciosa. The grounds were willful desertion, and the other woman not mentioned was Shelley Winters. That was April, 1957. On May 4, Tony and Shelley—Shirley Schrift—were quietly married in Carson City, Nevada, by a justice of the peace. Their ages were recorded on the license—she was thirty-four, he was twenty-eight.

It was her third marriage and she was wary of another strike-out. She had been Mrs. Mack Meyer, wife of a Chicago textile salesman, for four years in the Furious Forties. Then a divorcee for nearly six years, until Vittorio Gassman came into her life. They were married in April, 1952, separated by autumn, 1953, reconciled with the birth of baby Vittoria, and finally divorced in June, 1954.

But when she met Tony, she backed down on the declaration. Tony was different, with him there’d be no third strike. And she wasn’t the only one who thought so. His own cousin, actor Richard LePore, said at the time, “Those two have a lot in common. And to me, Tony’s the most understanding guy in the whole world.”

Contrary to Richard’s high hopes, the rumors of unmatching temperaments began to pop. They fought, kissed, made up, fought, kissed, and made up. But Tony became more restless with every year of marriage. First the rumor came flying across the Atlantic that he and luscious Ava Gardner were making more than just a movie called “The Naked Maja” together in Spain.

Shelley, furious at the gossip, flew to his side. She told reporters then that Tony and Ava were “. . . just two people making a movie together. And Tony and I couldn’t be happier.”

How well, and for how long she chose to believe her own statements, is a question. There were other rumors, then the separation, and Tony met Judy Balaban, who was also separated.

Judy and Jay Kanter had been married at about the time Shelley and Tony were starting their own storm-and-love-tossed union. When Jay, an agent, moved up to vice president at MCA, his new job was so demanding that sometimes he saw his wife for only a few hours a week. She chafed at her loneliness, and in time they separated. But she told everyone: “We’re trying to work out our differences. The separation is only temporary.”

The Kanters did reconcile, with Jay trying to rearrange his working schedule to give his wife more time. But schedule or no, she left again. And when she was introduced to Tony, at a party in Beverly Hills, sparks flew, followed swiftly by rumors of romance.

To all this Shelley said, “I’m still married to him, that’s all I know. Anything else that should be said will have to come from Tony.”

The “anything else” was said. Judy and he were “just friends.”

When Shelley flew East to star in a play, “Invitation to a March,” Tony promised he’d phone her regularly. But instead, the distance between them appears to be widening. She stayed alone in the East, he stayed on the Coast. Shelley could no longer hide her unhappiness. During the tryouts of the play, she began to eat almost compulsively and gained sixteen pounds. Some say it was her feelings of insecurity about her marriage that began to show in her work, too. She found it difficult to remember her dialogue, she seemed continually worried that other members of the cast were stealing her scenes, she began to ask for changes in the script. “She’s her own worst enemy,’’ people said. In the end, she withdrew from the play and checked into a hospital to lose the extra weight.

Her friends fear the marriage has reached the point of no return. They know that the Academy Award she won last April for her emoting in “Diary of Anne Frank” gives her little solace—that this dedicated actress would toss ten Oscars overboard for one Tony. “You can’t curl up at night with an award,” she has said.

But she hasn’t given up, either. She said, “Maybe I made a mistake marrying Vittorio, and maybe Tony is temperamental the same as Vittorio was, but this marriage is no mistake. I’m sure of that.”

Yes, she’ll try, that’s for sure. Tony is her whole life. But can she do it?

SHELLEY STARS IN “LET NO MAN WRITE MY EPITAPH” FOR COLUMBIA AND “A MATTER OF CONVICTION” FOR U.A. SEE TONY FRANCIOSA IN “GO NAKED IN THE WORLD” FOR M-G-M