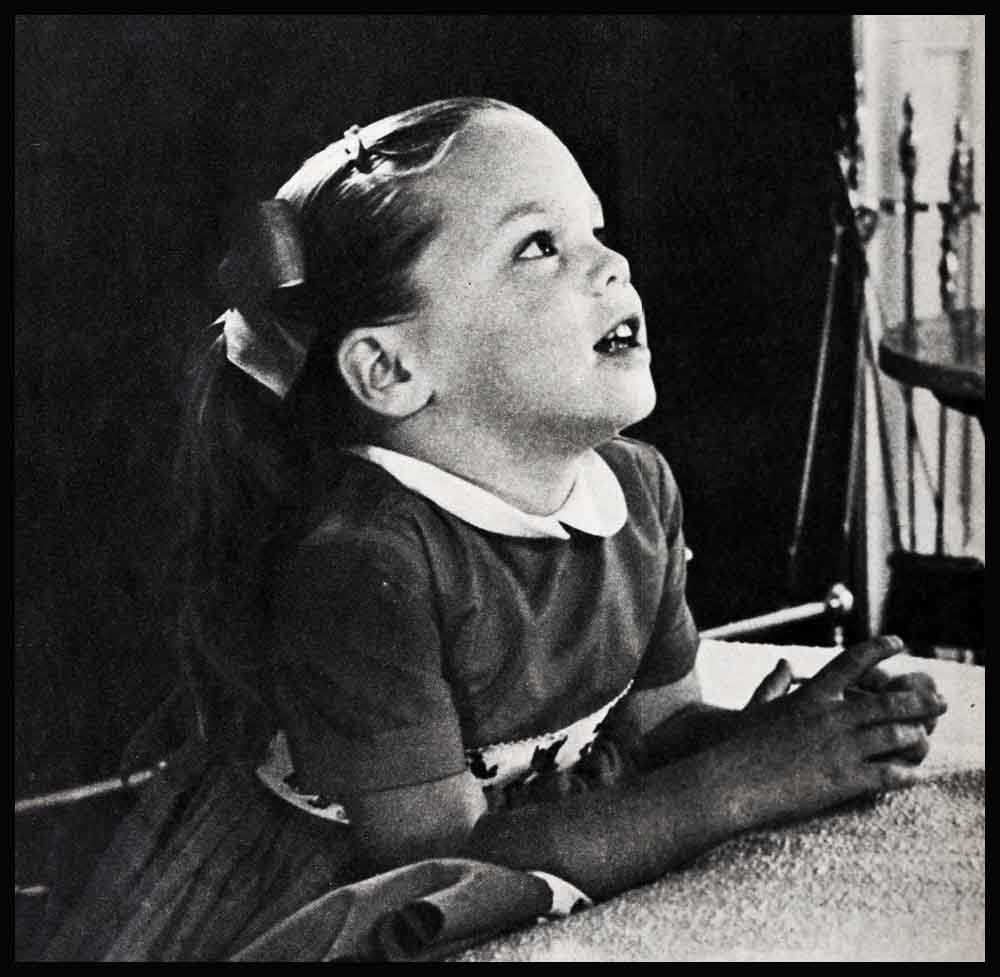 “Mommy, What Church Does Santa Claus Go To?”

Kelly’s blue eyes widened, There it was—the big tree! And what a tree! One day, it was only a tree, a tall green spruce it took two men to bring in—but still, only a tree, And the next day, it was a miracle of light and color—trembling with tinsel, dotted with snow, blazing with lights, shimmering with delicate glass and crystal ornaments. And then in a moment Daddy touched a hidden switch and the entire glorious structure began to revolve slowly in its stand, while Christmas carols tinkled brightly in the silence. “Oh!” Kelly gasped. “Did Santa do it ?” “No, not Santa,” Janet told her. “Daddy and I did it last night while you were asleep. Some friends came over and we had a tree-trimming party for grownups.”. . . A year later Kelly remembers that tree.

Now she stares for a long time at the picture of it she’d tacked up on the nursery wall—the big Christmas tree with Mommy and Daddy and her standing in front of it and baby Jamie in her carriage right next to them. When she wrote to Santa, she’d ask him to make it just like that again this year . . . She digs into a box of toys and finds a red crayon and then a piece of paper and then she takes them downstairs to the living room and then climbs up on the chair in front of the corner desk. “What are you doing there, Honey?’’ Janet asks. Kelly looks at her parents seated on the couch. “I’m writing to Santa,” she answers.

“Some kid we’ve got,” Tony says. “She gets eight days of Chanukah, with presents every day. and then she writes to Santa for some more. . . .”

Kelly doesn’t hear him. She is too busy printing “Dear Santa Claus” at the top of the page. Then she stops and asks, “Mommy, when will Santa get my letter?” Her face looks serious and puzzled. Janet thinks about it for a moment. “Well, today’s Saturday and if we mail it tonight, extra special delivery, he’ll get it tomorrow, after church.”

“Oh,” Kelly says and turns back to her letter. But then, suddenly, she turns around again. “Mommy, what church does Santa Claus go to?”

Janet and Tony look at each other. And then Janet finds an answer. Kelly listens while Mommy tells about Christmas before she was even born.

“Remember that Christmas when we were just married?” Janet says to Tony. “Remember Paris that Christmas? We went walking on the Left Bank and we found a little church that had Midnight Mass and we decided to go in. Remember? At first you didn’t quite want to. We were still feeling our way around in each other’s religions then—kind of afraid of offending each other.

“And you said. ‘How can I go into a church and not pray?’ And I said, ‘Well, I’m not Catholic, either, and this is a Catholic church. But I’ll say the prayer I want to say, and you say the one you want to say, and God will hear us both.’ ”

Tony nods. His eyes move slowly around the warm, comfortable room, resting on Kelly at the desk and then on Jamie in her playpen. “Yes,” he says at last. “He must have heard us, all right. . . .”

They were silent a moment. Then Janet says softly, “And the year before that, Tony, remember our very first Christmas?”

“And you’d never seen one before—”

“Oh, I’d seen one,” Tony corrects. “But only in store windows and things. I hadn’t actually ever been in someone’s house at Christmas when there was a tree. I never knew any Gentiles that well, I guess.”

“But you liked it. And what you said,” Janet recalls, “was ‘Let’s get one for my folks!’

“And your poor father didn’t know what to make of it!”

For a moment they are both silent. Tony’s father had been dead for more than a year now, but the pain of it was still there. Janet takes his hands in hers.

Tony chews at his lower lip. “Jan, remember how he looked at that tree? He didn’t like it at first, remember? Only he was so nuts about you, he didn’t want to say anything.”

Tony’s voice grows lighter. “And how pretty Mom made it with all that tinsel—”

“Then,” Janet finishes, “then he said, ‘How can anything that gives so much pleasure be bad for the soul?’ And he loved it.”

“He must have,” Tony agrees, “because the next year he went out and got one for the family himself!”

All that morning and afternoon, friends come and go, bringing wrapped Christmas presents for the Curtises, taking gifts from the diminishing pile in the hall closet. There is excitement, and Kelly asks, “Why can’t we open them now?” And Janet answers, “No, we must wait two weeks until Christmas morning.”

It is four o’clock that afternoon when Tony’s mother and brother Bobby come in with gifts for the children and for Janet and Tony.

Mrs. Schwartz’s voice is gentle. “How well the children look, Janet. Papa would like to see them. . . .”

“I know,” Janet answers softly. “We were talking about him just before—Tony and I. We were remembering how he came to enjoy Christmas. And how he gave me something, too—Passover. You remember the first time I went to a Passover Seder at your house?”

“Forgotten it?” Janet says indignantly. “I should say not. Do you know he says a Hebrew prayer every night when Kelly goes to sleep?”

“Had to, in self-defense,” Tony says, grinning. “First Janet taught Kelly all those other little prayers—”

“And lately,” Tony says, “since we’ve had a Catholic relief nurse from time to time, Kelly’s saying a ‘Hail Mary’ too! So, a few months ago, I decided to provide a little balance. And I remembered the prayer Papa taught me to say when I was a little boy—

For a moment, they sit in silence. Then Janet says, “Kelly calls that one her ‘Jewish prayer,’ She’s even learned a little bit of it in Hebrew.”

“I told her,” Tony says, “if she learns the whole thing, I’ll teach her to ask the four questions in Hebrew for Passover next year, and show Bobby he’s not the youngest in the family any more!”

“We’ll have Passover and Chanukah and Christmas,” Janet says. “We don’t want to impose our beliefs on the girls. We want to give them as much as we can of each religion—and then, someday, let them choose for themselves.

“It’s a problem,” Janet admits. “Like Sunday school. We were thinking maybe we would send them to the Unitarian Sunday School. That’s almost interdenominational. It’ll kind of get them in the habit of religion. You know, tell them about God without insisting that they believe any special set of rules or anything like that.”

Janet looks at Tony. “We’ll have to think it over and decide,” she adds. “I know if we have a son, Tony wants him to have a Bris when he’s eight days old, and a Bar Mitzvah when he’s thirteen. . . .”

“Yes,” Tony says. “I’d like that. But then, Jan, that would make him a Jew pretty thoroughly, wouldn’t it? And where does he get his freedom of choice then? I mean, we can’t bring up a boy one way and the girls another. It wouldn’t be—” his voice trails off as the door bursts open and Bobby appears, with a sleeping Jamie in his arms and Kelly right behind him. They’d been playing pickaback.

“Whew!” he explodes. “I’m beat!” He sets Jamie down on the couch and she promptly rolls over, fast asleep. “And I think this one is, too.”

Jamie, breathing peacefully on the couch, makes no protest. But Kelly objects. “No,” she wails. “Daddy, you promised! Daddy, tell me again about Christmas, the way you told me about Chanukah and the candles and the light that burned for eight days.”

Love is what matters

For a second, Tony looks back at Janet, questioning. But she only nods her head, and waits. Slowly, Tony turns back to his daughter.

“All right, Honey,” he says. “Well, Christmas is really a birthday party that everyone has for a little baby who was born a long time ago. Some people think this little baby was really God himself, come down to earth to live here for a while. Some people aren’t sure about that. But everyone loves the little baby because he grew up to be such a good, wonderful man, who loved little children and helped people wherever he went. The name of the baby was Jesus, and he was born far away across the ocean in a place called Bethleham. . . .”

Janet Leigh Curtis turns to her mother-in-law. “It will all work out, Mother Schwartz,” she says. “Tony and I love each other . . . and love our children . . . and love God. Kelly and Jamie are going to grow up the same way. And with love, we’ll find the answers together, all of us—together.”

“Yes,” her mother-in-law says. “Love is what matters. The rest—the rest will all work out.” And the two women smile affectionately at each other as they listen to Tony’s story.

And in the window of the living room, where they and Bobby sit in comfortable silence, the lights of the great Christmas tree will shine. Only a few nights earlier, in that window, the lights of the Chanukah candles flicker instead.

But the glow is the same.

See Tony in U-I’s “Spartacus,” “The Great Impostor” and “The Sixth Man.” Be sure to watch for Janet in Columbia’s “Pepe.”