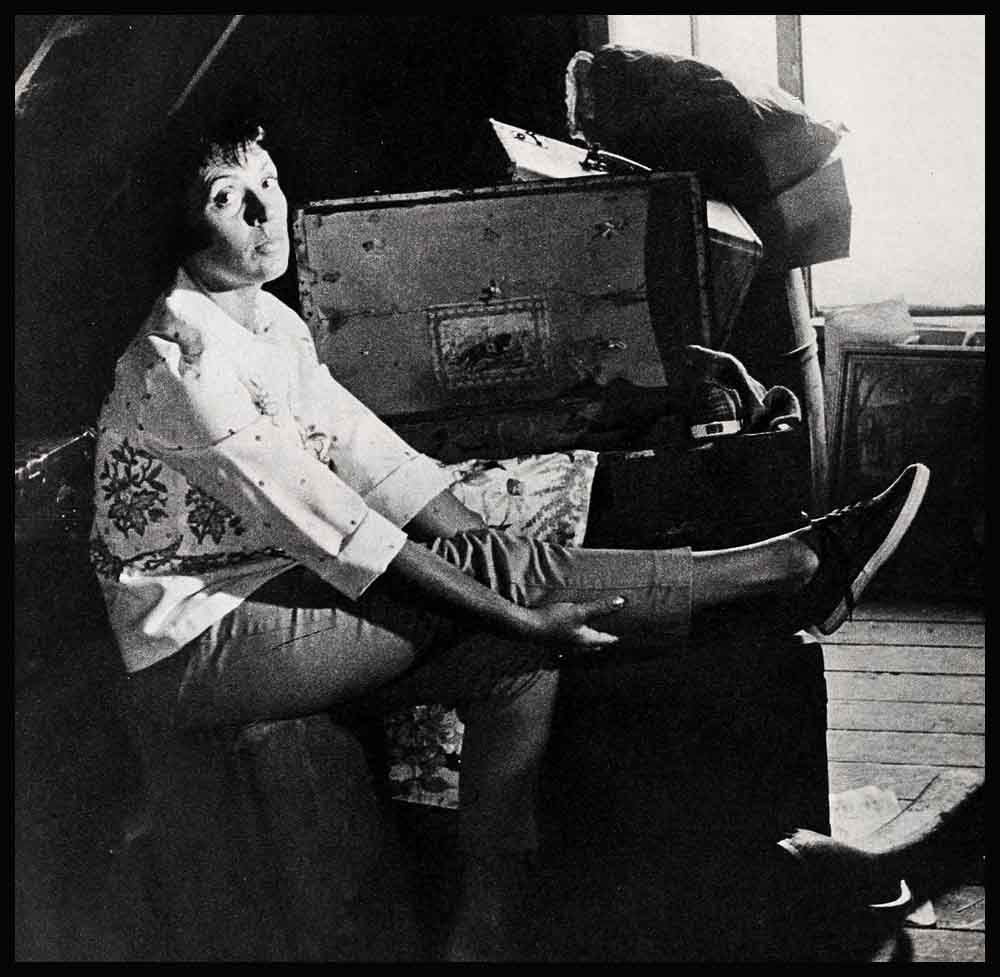 She slowly opened the old trunk in the attic and gasped. There they were! Who’d believe it now that the day she married Louis Prima, the bride wore sneakers. She’d gone up to the attic to find a put-away toy that the kids suddenly remembered and she was still scrabbling through the trunk when the phone rang. She got up off her knees and ran to answer it. It was Louis—with shattering news. “Keely. you and I—we’re breaking up!” he said. “Oh Louis, no!” she moaned. And then added, “Not again! “I’m sorry, dear—again.” There was a long silence. Then she asked, “This time, Louis, are you walking out? You know, leaving the house?” “That’s it, kid.” Another silence. At last Keely said, “Well in that case, Louis, I think I’ll hang up, if you don’t mind, because the steak I’m defrosting for supper will be too big for just the kids and me. I’ll go put it back in the freezer.”

A blast of giant-sized laughter nearly tore her eardrum open.

“You’re the nuttiest wife I have,” he said.

Keely was giggling helplessly herself.

“Same to you, Mr. Prima,” she said. “But no kidding, who’s busting us apart this time?”

“Oh, you know people. A couple of big-mouths suddenly have nothing better to do. so they say come on, let’s tear somebody apart. And it came up our number.”

Keely laughed again, but a little ruefully. “Ah well, Chief,” she said, “just so we know it’s not true.”

“And you’ll defrost the big steak?”

She went back up to the attic, the smile lingering. What a clown that guy was—thank goodness! Seven years of marriage and never a dull moment. Then she noticed she was still holding them—a very old, very dirty pair of tennis sneakers that were worn through at the toes, ragged along the sides, the laces frayed and knotted.

Suddenly she hugged them to her and, going back to the attic, started to laugh.

“That was some wedding,” she giggled.

There on the floor by the trunk, she began remembering that crazy day at Virginia Beach. She even remembered the time—the exact time it all started. Two P.M., July 13, 1953.

She’d been sitting cross-legged on a blanket, absently sifting warm sand between her tanned fingers, and feeling drowsy in the delicious sun. The big prone figure beside her was more than drowsy, he was asleep. This was her boss that she loved and respected more than any man in the world—Louis Prima, craggy-faced, gravel-voiced, trumpet-playing bandleader and buffoon. He was also her fiance. She gently touched the ring on her fourth finger, left hand. The diamond sparkled in the sun, but she wasn’t noticing. She was smiling tenderly down on Louis. At a time like this, he was fast asleep.

He looked as peaceful as her mother, who was reading under a beach umbrella. But her mother didn’t know—and Louis did. She put her face close to his. “It’s time, Babe,” she whispered. “Babe” was their pet name for each other.

He came alert instantly and stood up. Keely scrambled to her feet and walked around to her mother. “C’mon, Mum, let’s get dressed and get something to eat.” Her heart was beating like mad and her voice seemed unnaturally loud and too gay.

Mrs. Smith looked up from her book. “I’m not hungry,” she said mildly.

Keely leaned down and whispered fiercely, “Mother, please! I’ll explain later.” She sounded so urgent that her mother rose hastily, alarmed. “What— what’s wrong?” she asked.

Buster, her twelve year old brother, and Louis’ young nephew Buddy, came bounding out of the water after them.

“Where you going?” they demanded.

“I’ll bring it back.” Her voice was edgy. “Tell me what you want.” She began moving off impatiently. The boys had to shout their orders—chocolate soda and a hamburger apiece—after her.

The minute the little procession hit the boardwalk, Mrs. Smith grabbed Keely’s arm, pulled her face to face. “What’s this all about?” she asked anxiously. “Are you in any kind of trouble, Keely?”

Keely grinned. “Anything but, Mum. Listen, Louis and I are getting married in half an hour and we want you there.”

Mrs. Smith stood rooted with shock. “Married,” she said. “Just like that—married?” Keely had to push her to the hotel. In the room, she sank to the bed. “I—can’t believe it.”

“Mum, engaged couples get married every day,” Keely said cheerfully. “We’re just doing it sooner than we hoped. Mum,” as the questions started, “we have to hurry. I’ll tell you everything, it’ll be at the home of some friends, and the guests are you.”

“Because we don’t want it that way, Mum,” Keely interrupted. “No fuss, no publicity—nobody’ll even know. Oh Mum,” she grabbed her mother and waltzed her around the room, “Mum, a secret marriage—isn’t it exciting?”

Keely promptly plunged her on the bed. With her first breath Mrs. Smith asked, “Did you get a nice afternoon dress for the ceremony, dear?”

“Then what are you going to wear?”

Keely backed out, her hair all tousled but her eyes bright. In one hand she held a skirt—a plain straight navy linen skirt. In the other a blouse—a little white-and- print sleeveless blouse.

“What people?” Keely asked gleefully. “Mother, you’re forgetting—no one’s going to know. Hey! I almost forgot. . . . Shoes! Shoes! Shoes! Come here, wedding shoes,” she sang, as she got down on hands and knees on the closet floor. Then she waved a pair of shoes in her hands—sneakers! And what decrepit old ones.

When they were both dressed and ready, Mrs. Smith picked up her handbag and walked briskly toward the door. “It sounds like out of the story book,” she said. “Got everything?”

Keely nodded, slowly closed the room door, and hesitated. Her hand stayed on the knob.

Keely turned to face her mother, her black eyes big in a suddenly pale face. “I . . . I’m kinda scared, Mum,” she admitted in a small voice. “Do . . . do I look all right?” Mrs. Smith put her arms around her and they clung silently to each other for a few seconds. Then she took her daughter’s face between her hands and gently kissed her on the cheek. “You’re a beautiful bride. Darling,” she whispered huskily. “And your mother is very, very proud of you.”

Louis was waiting in the lobby. He wore light grey seersucker slacks, a blue and grey sports shirt opened at the throat and a light blue sports jacket. His wide, happy grin threatened to split his face.

Outside, Bill Snider, the friend, helped Mrs. Smith into his car. Keely sat stiffly beside her, staring straight ahead, clutching Louis’ hand. He put his arm around her. “C’mon Babe. This is just an ordinary day . . . remember?” She swallowed hard and nodded.

They made one stop—in front of a florist shop. “We won’t be a minute,” Louis said softly. They returned in fifteen minutes. Louis half-hidden behind a huge bouquet of gladioli. He bowed gallantly and offered the flowers, container and all.

Keely giggled. “It’s a good thing I don’t have to toss this from a balcony. I’d kill someone.” She started to lay the flowers flat across her lap. His hand shot out to stop her. His warning cry: “Look out!” merged with her surprised shriek: “Eeeeeek! I’m soaked!” She held the bouquet at arm’s length, staring in horror at the puddle in her lap. Awkwardly, Louis helped her mop it up. “I’m sorry,” he apologized. “The florist is Bill’s cousin and he asked what was the occasion, so Bill said visiting a sick friend. He gave us his best hospital bouquet in water to stay fresh. You mustn’t tip it over. . . .”

“Now he tells me!” Keely moaned.

Snider stopped in front of a neat, two story white frame house. “Here we are,” he announced cheerfully. Clara Snider, an attractive woman with a warm smile, hugged Keely at the doorway.

“He’ll be here,” Snider assured him.

Clara chuckled. “You won’t,” she said softly. “All brides feel that way.”

The doorbell buzzed loudly and they all jumped. “Someone’s found out,” Keely thought. But when Snider opened the door, it was the Justice of the Peace, a big, rumpled, kindly looking man with bushy eyebrows and a droopy iron grey moustache that quivered when he talked. He asked Keely, “All set?”

She nodded, afraid to trust her voice.

They stood in front of the mantel. The judge intoned “We are gathered here, in the sight of God . . . to join together this Man and this Woman . . .” Keely sneaked a look at Louis. He was staring at the judge, solemn and attentive. She closed her eyes for one second, and her whole I life seemed to race by, like when you’re drowning. She was a scared sixteen- year-old, and Louis was auditioning for a girl singer . . . giving her the break . . . wherever they toured, looking after her so gently. . . . Louis falling in love with her . . . and she with him. . . .

“. . . Wilt thou, Louis Prima, have this woman to be thy wedded wife . . . to love her, comfort her, honor her, and keep her in sickness and in health … so long as ye both shall live?” The judge’s clear, firm voice snapped her back to the present. She heard Louis’ muffled “I will” and her own vow following, although she wasn’t aware of having formed the words with her numb lips.

Then it was time for the double ring ceremony. She carefully avoided looking full into Louis’ face, as he chanted the ritual after the judge, for fear that she would break down. She fixed her eyes on the shiny gold band that he held so tightly between thumb and forefinger that the flesh was a pinched white.

“. . . And by the authority vested in me by this State, I pronounce that they are Man and Wife. . . .” It was over. She was Louis’ wife! Keely felt his arms around her, his trembling lips against her own. She felt the tears rush to her eyes, and she realized that he was crying, too. The judge and the Sniders pressed in to congratulate them. Clara was crying, Keely’s mother was sobbing. Only the judge and Snider were dry-eyed. Keely swallowed hard and looked at Louis. Her first words as Mrs. Prima were: “Louis, were you scared?”

After the ceremony, Snider drove them back to the hotel. To make things “look right,” Keely insisted that they change into their bathing suits and go back to the beach.

They were faced by an indignant Buster. “Where’s my soda and ’burger?”

Buster glared at them. “Where were you guys, anyhow?”

“We ran off and got married,” Keely said lightly.

“Oh sure!” Buster growled, heading for the hotel.

I “I don’t think he believes us,” Keely grinned. Louis winked and squeezed her hand. . . .

“Mommy! Mommy!” Shrill childish voices and the clatter of footsteps climbing the attic stairs snapped Keely out of her remembering. She looked around with a start.

Two bright little faces appeared over the top step. Toni, five, and three-and-a-half-year-old Luanne, ran to Mommy to be hugged.

Toni asked, “What are those funny shoes, Mommy?”

“Funny?” Keely held out the foot with the sneaker on it, the other shoe still in her hand. She arched her foot admiringly. “They’re not funny, Sweetie,” she said. “I think they’re kind of nice.”

Keely took off the sneaker, tied it by the laces to its mate, and put the pair gently back into the trunk.

“Oh, I don’t know,” she said softly. “I have a feeling he thinks they’re beautiful, too.”