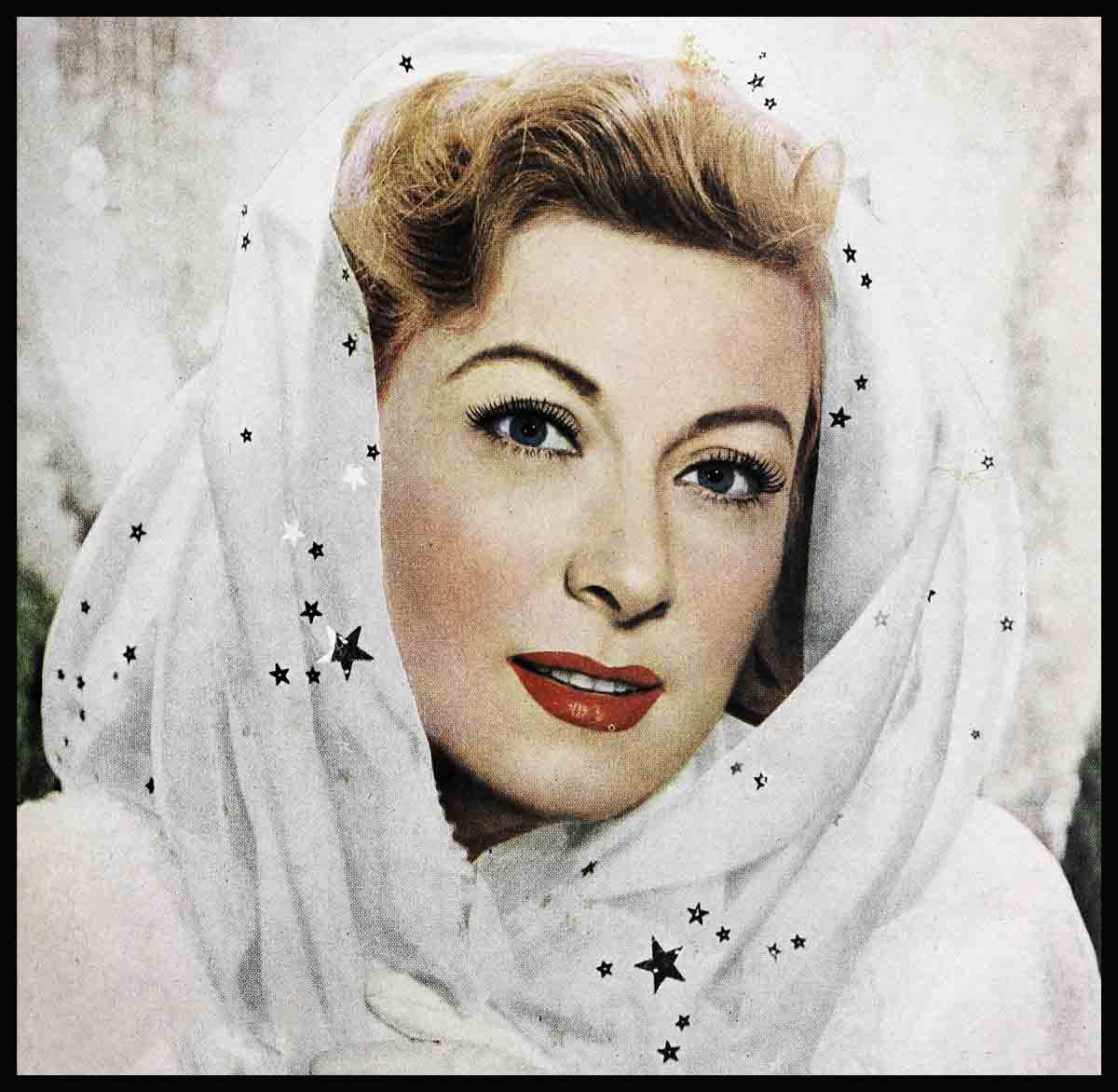 To me, Christmas Days should be as individualized and distinctive as one’s friends, each possessing a special brand of enchantment. I can’t recall any single December twenty-fifth that looms up, high as an Alp, above all others. As a matter of holiday fact, all my Christmases have been bright.

They have had an amazing series of backgrounds. There have been my Scottish holidays, all set in snow and haggis.

There were my London Yuletides, very posh as Londoners say, or very swank as we say in America, and now my Beverly Hills Christmases.

As a child I never knew, until just a few days before, whether I should have a rollicking Christmas in Scotland with my Greer cousins (Greer being no more than an Irish contraction of the good Scottish name of MacGregor) or would be worldly in London with the Garson group.

The uncle who housed us in Glasgow was a doctor and dearly beloved by all his patients, who used to bring him wonderful holiday gifts—bottles of wine, hothouse fruits and delicious candies. His house was sturdy gray granite and you could practically guarantee that Christmas would be a white one.

So it would be a jolly group who’d load into the car a couple of days before the great day and go to the woods above Loch Lomond to get the tree. We children would rush around in high excitement, calling out, “Here’s the tree! Here it is!” And all the time be keeping a sharp eye out for anyone who might disapprove. It was a time of great importance when we finally did choose the tree—which was always a pine. Awed, we’d stand back while an adult chopped it down and loaded it into the back of the car. Then we’d all load in too—our cheeks red from the winter cold, our anticipation of trimming our tree, high.

Perhaps it lacked the glamour of the trees they sell on Hollywood Boulevard, all painted white or pink or blue, but it smelled wonderful and had strings and strings of tinsel and brightly colored balls and other ornaments, treasured for years, with which we decorated it. We hung tinsel up, too, in the windows, behind the lace curtains, and it was lovely, watching the snow falling outdoors, feeling so warm and loved indoors.

On Christmas day itself after church—very Presbyterian you may be sure—all the relatives and the neighbors gathered around my uncle’s festive board and how we ate. The special treat was haggis, that honorable symbol of Scotland, along with thistles and bagpipes.

I should know how it’s made, considering the tons of it I have consumed, but I don’t, beyond the fact that it’s composed, some way, of meat and oatmeal. I’ve never heard of an American eating it—but it takes on glory in my memory because it was part and parcel of those holidays in the Highlands.

After the meal, though we were so stuffed we could hardly move, we children put on the play which I wrote each year to be performed for our elders. I always played the one really fat role. Nor was I so silly as to cast myself as any fairy princess. I played the dashing Prince Charming, except upon odious occasions when some boy cousin got dominant and insisted upon playing that.

No one was allowed to touch the presents until the play ended—which gave a kind of electric pace to its final scenes. I particularly liked the usable presents, pen sets, diaries, pen-knives, notebooks, paints.

My London Christmases were equally wonderful, highlighted by a blazing Christmas pudding made by Auntie Alexina. One of the aunts was quite rich and so very generous that she took a whole row at the pantomime just for us children. The Christmas pantomimes are an institution we don’t have in America but for an English child they are simply heaven. I suppose for a New York youngster the Radio City Music Hall holiday show must be just as enchanting.

The moment I knew I was to have a London Christmas I would start dreaming about the pantomime and I’d get so excited I would cease eating and sleeping almost entirely. When the great day finally arrived, and I was actually there in the theater, I would throw myself into the whole cast’s emotions so completely that I’d be exhausted for weeks afterwards. When the pantomime was over, we had another thrill. We would go out into the delicate, long English twilight, and as it had usually snowed, we would go for a motor run, shaking sleigh bells at the passers-by and throwing snowballs.

I grew up, became an actress, in London and on tour. Suddenly it was December, 1937, and with my mother I arrived at the Beverly Hills Hotel.

Mother and I felt we had been dropped into a land of swimming pools, palms and sunshine. It was December fourth when we arrived here and by December twenty-fourth we had our first California house, a dear little one. We expected we would have a very quiet Christmas, for no one in England had our address, so we knew we wouldn’t be receiving presents. How delightfully wrong we were. Over from the studio came a tree, all decorated. From our new acquaintances we received gifts, magnificently wrapped. Mr. Louis B. Mayer asked us to his house for dinner. Driving there, I felt I had never seen such a fairy tale place.

At any rate, that was a very happy Christmas and I have never forgotten the beauty of that day. I loved it so that I thought every one of my following days in Hollywood would be just as thrilling.

As you know, they were quite the opposite, which is how I happened to be back in London for Christmas, 1938. I had sat out eleven months and two weeks of my one-year contract with M-G-M and they had shipped me home for the role of the wife in “Goodbye, Mr. Chips.”

My Scottish uncle’s health was bad that year, so my aunt had gone on a Mediterranean tour with him. I was alone in London. We were shooting on “Chips” all through the afternoon of the twenty-fourth and when we finally quit I felt more terribly lonely than I ever had in my life.

Victor Saville, who’s now over here, too, bade me goodbye at the door of the studio. “I suppose you are off to some house-party in the country,” he said.

“Oh, a dinner party in London?”

“You’re not going to be alone?” he asked.

He insisted that I join him and his wife at their house. It was so jolly, a very big party, and after dinner we danced the Lambeth Walk till our legs gave way. I came back to Hollywood in March of 1939. Six months later, England was at war. Before so very long, so was America. There was nothing about my war Christmases that was very different from other homes that had a man in service. Suffice it to say I am grateful to heaven for having given us back our men and our civilian Christmases.

Every once in a while I hear someone argue that Christmas is only for children and that adults shouldn’t bother with it. I don’t believe one word of it. Christmas is a home day, and it must be divine to be in huge families then. I wish I could expect to have one, sometime, with my forty-seven grandchildren gathered round my knee. But as that looks a little doubtful, I do wish there were some way of reaching the people who are stranded on Christmas and have them all come in.

I hate the idea of anyone’s having to dine alone in a public restaurant on a day like that and I think that anyone in that position should be quite shameless as I was in 1938 in London, and latch on to some one else’s family. Furthermore I think all the Christmas traditions should be maintained, whether it’s hanging up stockings or whatever. I love wrapping packages. And I love the radio at that time—the Christmas carols sung to us by perfect voices. We hear the bells and those great words, “Peace on Earth, Good Will Toward Men.”

People do practice that—for one day a year—and even if it lasts only a day—and with many people it does last longer—it is good that we have it for that time at least. I wish there were some way that whole nations could share it, with hands across the sea, and smiles over boundary lines. Perhaps that will come about sometime. Then those immortal words will truly live.