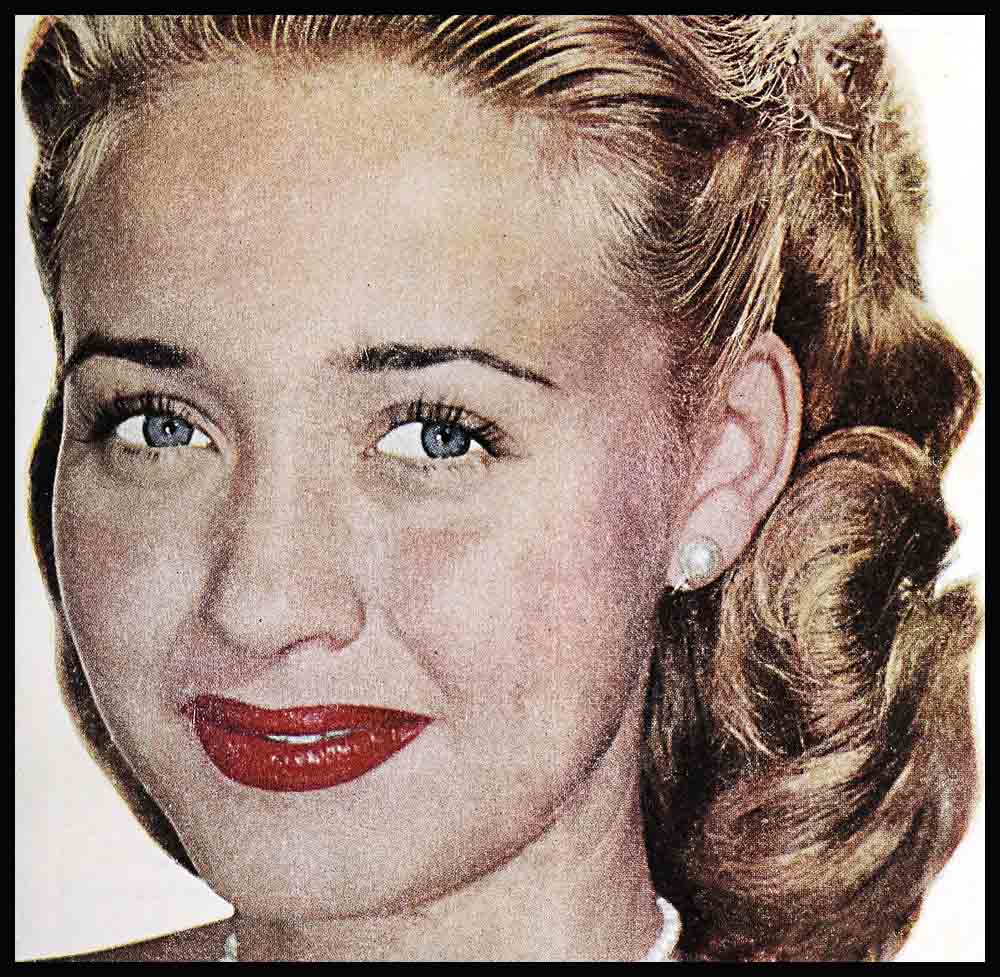 For a couple of youngsters with heads in the clouds, Geary and Jane Steffen (Jane Powell to you) have their feet firmly on the ground. And a good case in point is their new house. For a long time they lived in an apartment, and only when they were sure they could swing a house did they even think about a house. They found just what they wanted, a white, modified Colonial with green shutters, surrounded by a picket fence, on a curving, tree-lined street in Brentwood.

Did they rush to the nearest decorator? Did they dash to a large furnishings store? They did not! Their first move was to transfer the welcome mat which says “Janie and Geary” from the apartment door to the threshold of their new house. And then Janie scrubbed woodwork. She would come home from the studio, don blue jeans, and work like crazy.

Geary now claims he’s the finest paper-scraper-off in these here parts, with the blisters to prove it. All action took place before they moved in. Geary painted the dining room and bedroom. But painting the picket fence was a partnership procedure.

In spite of the laughs and the fun, it added up to plain hard work, but it’s the Steffens’ first house and they wanted to do as much as possible themselves. “I’d like to do all my own housework, the cooking and everything,’’ Jane says, and she means it. ‘But with full days at the studio, it wouldn’t be fair to Geary, nor to me.”

Though they’re ecstatic about their new possession, Janie and Geary didn’t go overboard on furnishings. To the furniture from their apartment Janie added only one wing chair which she bought at. an auction, and a pair of handsome chests for their bedroom. By giving the furniture a new background, and cleaning the covers that showed signs of wear, she made it look like new. You’d never dream the various pieces weren’t bought especially for this house.

Because the house is fairly small, the furniture that was scaled to fit their first apartment was perfect. Scale incidentally is important in any house, small or large. A large room with furniture that’s too lightweight or small looks just as bad as a room that’s crowded with massive pieces.

Janie gets away from the trend towards modern or provincial, prefers instead the dignity of 18th century style. “It’s always good,’ she says. “That’s what appeals to me. We can use these things for years!”

The grand piano dominates the living room, but that’s to be expected. Janie without the piano would be like Janie without a voice. The piano is another reason for her selection of rich mahogany pieces. They harmonize with her piano.

For color Janie chose a contrasting scheme, red, blue and gray, a combination that flatters her blonde youthfulness. She’s used it throughout the house. In the living room, the walls and ceilings are blue- gray, a fitting background for the red sofa, blue lounge chair and chartreuse love seat. She let the furniture carry the colors, and selected a textured white for the draperies, with chartreuse brush fringe trim at the bottom of the cornices. A pair of graceful china lamps top the two mahogany end tables beside the sofa, and Janie built the colors in her living room around the flowers in the lamp bases. Each lampshade wears a plum colored velvet ruffle around the top, and Janie bought the wing chair at the auction because its plum-colored upholstery matched the lampshade ruffles to perfection.

Two fireside chairs covered with a floral print faille—yellow, green and pink on gray ground -flank the white panelled fireplace, and there’s a mahogany drum table nearby. The leather-topped drum coffee table came from an auction. In fact, almost everything Janie and Geary have, they bought at auctions, saving a pretty penny thereby.

The rugs are an exception, but still a bargain, for that in the living room came with the house, and the one that matches it in the dining room, they bought from the previous owner for twenty-five dollars. Janie and Geary have put their furnishings money where it counts the most, and other items will come later. It’s not only wise, but it’s more fun to acquire your possessions gradually and carefully.

“I’m selfish about our house,” Jane confessed. “I want everything in it to be ours our colors, our ideas, our likes. So what if we do make mistakes, at least they’ll be our very own!”

But I don’t think Janie has to worry about mistakes. By repeating the same color schemes in three of the most important rooms, she gave the house the continuity from one room to another. She kept patterns to a minimum and concentrated on clear, strong colors.

In the dining room, Geary helped paint the panelled wainscot gray, but the wallpaper above he left to the professionals. It’s a warm red tone with a stylized design in white with blue-green, this last color matching the textured draperies and cornices. The dining group, originally bought at an auction, they moved from the apartment.

Speaking of the moving—that was a day! The Steffens moved themselves. They rented a small truck and invited their friends to come over early Sunday morning for a moving party. It was a great success. By Sunday night, everything was in place, silver in the drawers, pictures on the walls, just as settled as though they’d been in the new house for months. In fact, the following Saturday night Janie and Geary had their housewarming, a big buffet party. “It was a most interesting time,” observed Gladys, the Steffens’ charge d’affaires.

When it came to the den, all Jane and Geary had to go into this very informal room was a coffee table which Geary’s sister had given them. The top is made from a slab of wood, a cross section of a tree. It went beautifully with the pine panelled walls and peg and groove floors, but one table doesn’t offer much comfort by itself. A solution presented itself when they acquired from Janie’s mother a studio couch covered in a heavy yellow and green striped cotton, and a sectional sofa in red, green and white plaid cotton These pieces, plus a green shag rug, filled the room admirably. To top it off, Janie specified a stylized red strawberry and green leaf patterned wallpaper on the ceiling.

Since the den gets a lot of living, Janie and Geary display their numerous awards and trophies there. “We worked hard for these,” explained Janie, “and they mean a lot to us, so why should we keep them on a closet shelf?” Place of honor, though goes to a pair of Alpine picks over the brick fireplace. They’re good conversation makers and worth discussing, for Geary used them when he climbed Mont Blanc. His mountain-climbing days are behind him, so the picks are strictly ornamental but he’s still a winter sports enthusiast.

The Steffens have a good point in heir attitude. Personal belongings identify a house with the owners, so if you have treasures of which you’re justifiably proud, let others see them too! But be sure to choose an informal room, one that’s used particularly for the family and close friends. Leave the living room out of it.

Janie chose the bedroom in which to display her one and only painting, a pastel of a cat which she did five years ago. It’s framed with peach-colored mirrors, and the background’s blue, blending with the gray-blue walls. Gray shag carpeting matches gray linen draperies trimmed with dubonnet. Incidentally, the outsize bed was an auction find, too, and Janie had the quilted dubonnet faille spread and head- board made for it. The large white monogram in the center of the spread makes it extra smart. These came from the apartment, and Janie set off the richness of the color with the gray and blue background.

For pattern, the wall behind the headboard is covered with wallpaper in a deep red rose design, framed with blue ribbons on a gray background. The pattern forms a foundation for the bulk of the bed. A pattern attracts your eye, as does a large, solid area, and when they are separated, it creates a sense of distraction. When they’re together there’s no question of a divided focal point.

Janie’s alcove dressing room, opening from the bedroom, has floor-to-ceiling windows around two walls and the third wall is filled with a built-in, glass topped dressing table. To dress the windows, Janie selected plain white panels topped with a pleated valance that matches bedroom draperies There is also room for Janie’s desk, blue, lined with coral, given to her on her eighteenth birthday.

A few yards down from the alcove, a door opens into the bathroom, all done up in tan and green, tan clay tile floor and wainscoting, tan fixtures, the green on wall and ceiling, in the rug and towels Janie doesn’t care for the appearance of a bathtub, so she concealed its shiny emptiness with a pair of louvered doors. This makes the bathroom seem more like a dressing room. The bathroom is shared by another bedroom. Next summer this will be a nursery.

In the entrance hall, with its blue and white scenic paper, the mahogany radio-phonograph doubles as a hall table.

“But there’s still so much to be done,” sighs Janie. “We need mirrors in the hall. I’m looking for pictures, and some other things, but we just can’t do it right now.” Though the house is fairly small and undeniably modest, the grounds are spacious enough to include a badminton court at the side and a swimming pool in the rear. Their friends, the young-marrieds and about-to-be-marrieds, flock over whenever fun’s in the making, which is often. And they all look forward to summer with zest. Can’t you just hear them on a delightfully hot day, thinking of the swimming pool and the welcome they’ll get from the Steffens? The word, sure enough, will be, “Come on kids. Let’s go over to Janie’s and Geary’s!”