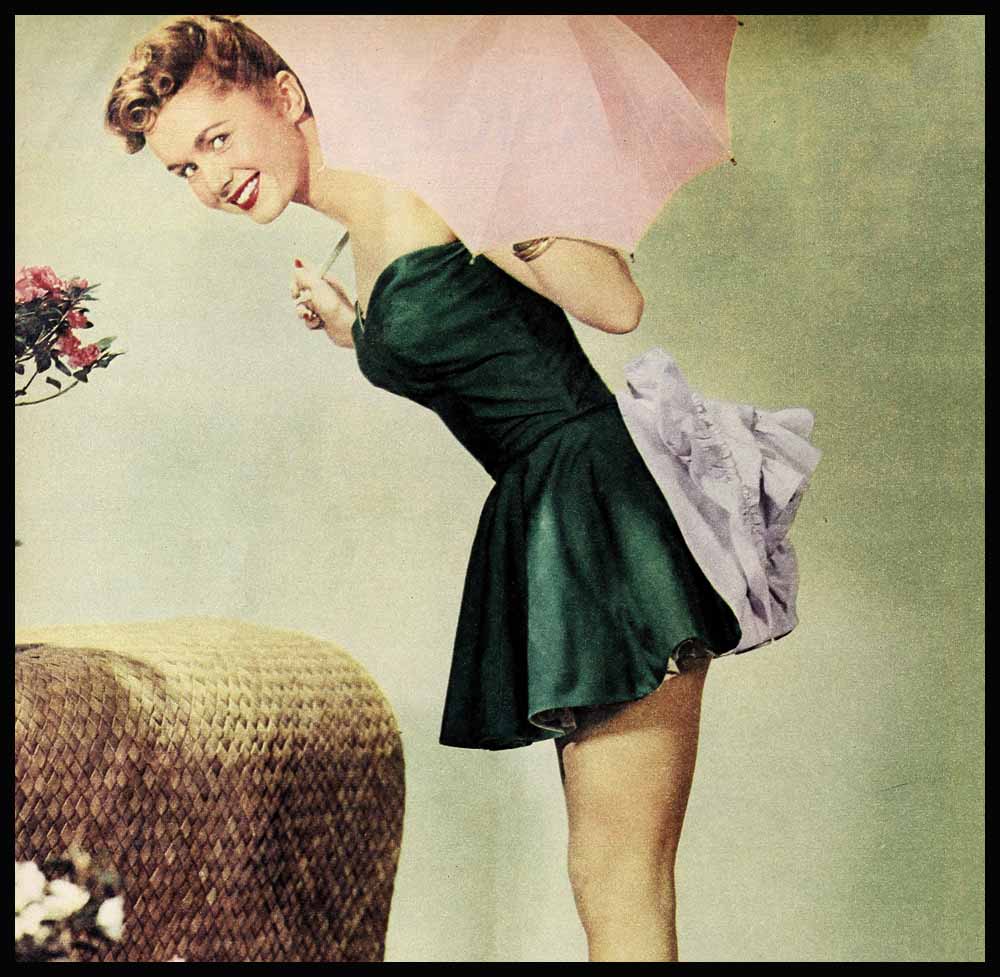 Let’s Get to Know Debbie Reynolds!

like lightning. She’d tried out for the lead in the big dramatic offering of the year, “And I

wasn’t good enough.” So she “propped” instead. She “did the lightning” in the murder mystery, she was the eerie ring of the doorbell, and in between times she was the sloshing of feet through imaginary mud.

Today she is proof that lightning—given even a little assist—can and does strike twice. Debbie, Metro-Goldwyn-Mayer’s pint of dynamite, is the hit of Hollywood’s sub-deb set. With her wide-open gray-green eyes framed by sweeping lashes, her glossy golden-brown hair worn usually in a wind-blown wave with one large soft saucy curl behind her ear, a pert nose and bedimpled chin—Debbie Reynolds is the cutest thing since Seven Up spiked with pistachio.

She’s a doll-sized seven, five feet one and one-half, with each of her one hundred and two pounds where nature (and the camera) intended. She says she’s a full nineteen years old—“but nobody ever believes it.

Not even when I’m all dressed up in black and sophisticated.” At any gathering where strong beverages are served, Debbie’s answer is as automatic and swift as the raised eyebrow that inquires her age—“I was born April 1, 1932—and now, if you don’t mind, please, I’d like a straight milk.”

At her studio she thumbed past ultra-glamorous portrait shots and chose another for her fan-mail pictures, saying, “This one looks younger, don’t you think?” She’s smart enough to realize she will probably continue playing younger parts “for at least two more years.”

What’s more, Debbie studies the smaller fry for her homework. “There are kids in every age group in our block in Burbank. I love to play baseball and football out in the street with them, and I watch them—so I won’t go stale on acting real young.”

But there’s nothing small about her talent. In the opinion of some critics, as the fourteen-year-old “Miss-Fix-It” sister, she stole “Two Weeks with Love,” which, considering Janie Powell and Louis Calhern, would be adjudged senior-sized stealing. She was immediately put into “Mr. Imperium” with Lana Turner and Ezio Pinza. And she is now rehearsing ballet day and night, prepping to dance with Gene Kelly in “Singing in the Rain.”

In the personality department Debbie’s a pert little paradox, as young at heart as she is mature in the brains department. Assured and ambitious, she goes her merry way studying to be a movie star. Privately, she’s still a bit surprised to find herself an actress instead of the gym teacher she meant to be.

She’s a cute combination of middy-blouse and red satin shoes, a beau-catcher who’s more happily at home with the hair-ribbon set. She’s strictly a funloving tom-girl who’d rather bowl than beau. “158 is my top score. But I usually bowl around 133. My girl friends and I go every week to a bowling alley in Burbank.” She’d rather play the French horn (as she has the past six years) in the Burbank Youth Symphony every Saturday night than decorate the arm of the dreamiest date in town.

Not that “fellows” aren’t all right, too—“at a special big party or dance, or at football or baseball games, something that sounds like fun.” Debbie likes big men, “the bigger the better, six-foot-four and over 200 pounds, fellows the size of Howard Keel.” But they don’t have to look like Howard—“just so they’re big and have a sense of humor. I just like to joke around and have fun.”

Debbie even clowns when she has laryngitis. Recently she arrived at the studio with a big cardboard sign hung around her neck which read, “I Can’t Talk,” and in smaller print underneath: “Reason—Laryngitis.” All of which accomplished little other than inspiring conversation all the way down the studio streets with curious acquaintances who stopped her to ask, “What’s the matter with you?”

Outside of that time, Debbie admittedly has never been at a loss for words—except on the memorable occasion when she won the title “Miss Burbank of 1948,” a title that led to her movie contract. “I just entered to get a free blouse,” she says. She was, it seems, standing there in the Burbank Recreation Hall, “tired and hungry and thinking about how I’d love to have a chocolate malt,” when the judge announced she’d won. “I was leaning against the piano—and I almost fell flat on my face. I walked over to him and just stood there. For once I didn’t know what to say.”

Debbie didn’t even want to enter the contest, but one of her girl friends didn’t want to enter unless Debbie kept her company “and she’s very cute and I thought she might have a chance to win.” So Debbie wore her “Easter dress” one night “and my old bathing suit—so old if I’d bent over, no telling what would have happened”—another night. She walked around, stood in line, did her impersonation of Betty Hutton singing ‘I’m Just a Square in a Social Circle” and, in addition to winning the crown and the blouse, she won the eye of a Warner Brothers talent scout. He arranged the screen test that won her a contract.

Debbie was with Warners a year and a hall, during which time she was seen as June Haver’s sister in “The Daughter of Rosie O’Grady.” Then Metro-Goldwyn-Mayer picked her to portray Helen Kane, the “Boop-doop-a-doop” singing star in “Three Little Words.”

She’s a big movie fan and very impressed still about meeting Clark Gable, Lana Turner, Fred Astaire, June Allyson—“She’s my father’s favorite. I hope we make a movie together sometime so I can get him a picture,” and she’s crazy about Red Skelton. “I think making people laugh is so important, don’t you?” One columnist, struck by Debbie’s gamin quality, recently commented, “Looks like Metro has another Judy Garland in Debbie Reynolds.” “I just died,” Debbie says if you mention this to her. “Comparing me with that great star. She has more talent than I’ll ever have in my life!”

Born Mary Frances Reynolds in El Paso, Texas, Debbie lives with her mother and father (a carpenter for the Southern Pacific Railroad) and a Persian cat named “Michael O’Flaherty” in “just a regular house” in Burbank. Her twenty-year-old brother and his bride “live in the new apartment my dad and uncle built out in the garage—it’s so cute.” Her brother, says Debbie, is her “worst and best” critic. “Other people can tell you you’re wonderful and everything—but not your brother—not unless he means it. Not my brother, anyway.”

She wants to do musical comedy “more than anything.” And anybody who knows her—including her brother—is convinced she will succeed.

A day in her life would indeed stagger a hardier soul. She gets up every morning at 7:30 a.m., takes ballet from 9:30 to 11:00 at the studio, exercises until noon, ballets again from 1:30 to 3:30, takes a drama lesson until 4:30—then dashes home in her 1947 model Mercury club coupe, grabs a bite to eat, meets her girl friends and attends dancing school from 6:00 to 9:00 at night for special instruction in tap, boogie, free style and more ballet. Then a nightcap hamburger—and so to bed—until the alarm reminds her that it’s 7:30 a.m.—again. . .

When she will have time for even a junior-sized romance is the pay-off question right now. She has, it seems, “bet seven of the boys in the publicity department five dollars apiece I won’t get married before I’m twenty-three. We have it all in writing,” she says. “You know, one of these ‘We do hereby declare’ things, and I signed it ‘The Bachelor Girl.’ It’s all legal.”

To suggest that matrimony might win out before she’s twenty-three brings a hoot from Debbie, followed by: “And lose thirty-five dollars?”

The lucky lad undoubtedly would have to promise to love, honor, cherish—and pay oft her bet.