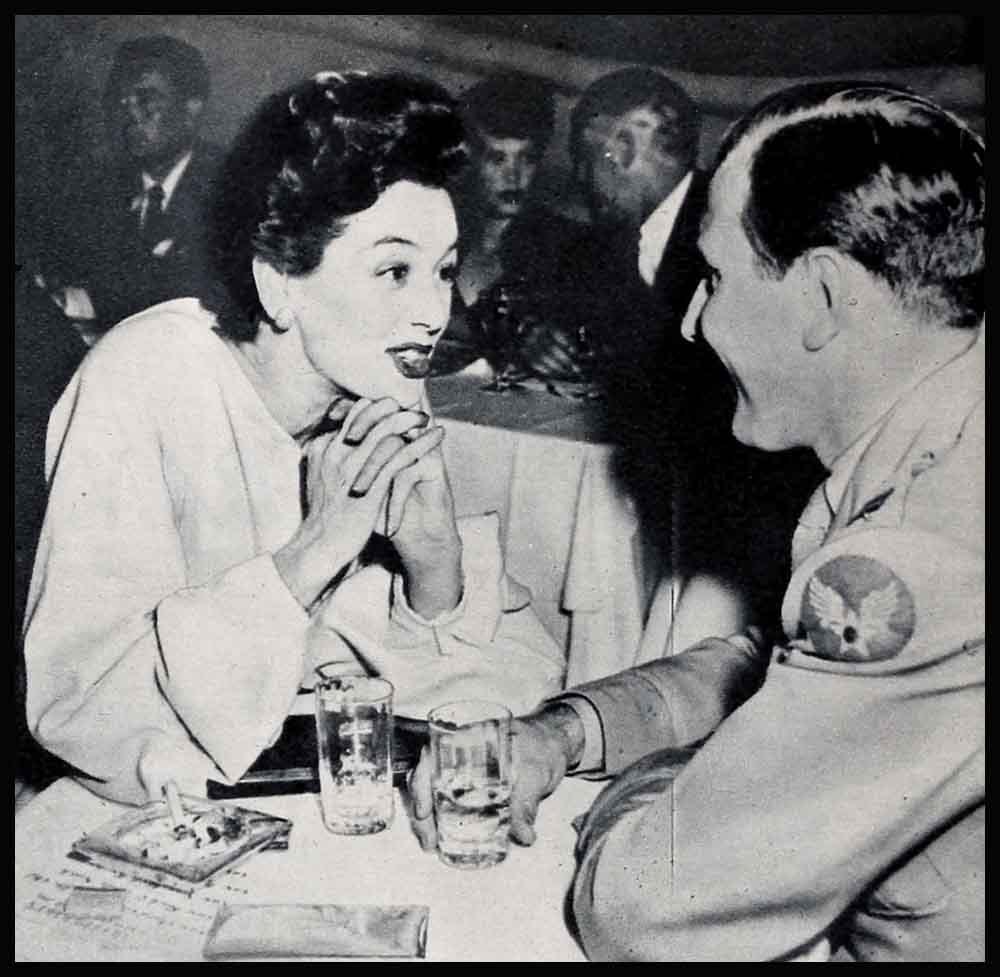 The Truth About Hollywood’s Nerves

Rosalind Russell is finally up and about these days, very pale and startlingly thin, after a long illness that came so close ta a complete nervous breakdown that for months Hollywood was worried sick.

She is calculatedly beautiful. She is super-intelligent. Along with being the ideal career woman, always shrewd on business dealings, always punctual, punctilious and super-efficient, she is also the perfect wife. Major Freid Brisson is now overseas, but while he was stationed near Hollywood, Roz was the perfect military wife, making their home the most exquisite setting for all and any leaves. Roz is a dream of a hostess, a “best-dressed” woman, a devoted and tireless mother, a wonder child to her own charming mother, the perfect sister to the other four Russells. She also is a keen social worker (she is a scrapper for players’ rights in the Screen Actors’ Guild), has made many camp tours and was working for benefits for Chinese War Relief long before and long after this latter was fashionable, and a loyally devoted friend to a vast throng of pals, the closest of whom is her sometimes co-star Cary Grant.

Study that list. Add to it the fact that in all conferences, be they about hats or housework or roles, Roz had to do all the talking. Realize that she is a perfectionist at everything, whether it’s the line of a hem or a bit of dialogue. Recall that she never could be idle-handed for so much as a split second. Then think of the ordinary facts of her daily living, the hair sets, the interviews, the rehearsals, the portrait sittings all poured on top of this.

Do you wonder, then, that when her baby was safely born, when Freddie Brisson was shipped overseas, she finally collapsed?

Most people in other communities accept a simple fact: They get tired. People in Hollywood, particularly those at the top, be they stars, writers or executives, refuse to acknowledge that fact. They dare not. The race is so swift that if they stop running one moment they are quite convinced that not only will they be overtaken, but passed. They have every reason to believe this since it has been proven true again and again. Even when the war came and swept the contract lists clean of male stars, did the studios suffer? No. The studios expected to—but along came Van Johnson, Frank Sinatra, Sonny Tufts, Robert Walker and a host of others, so competently filling the shoes of their predecessors that the box office went into a new high.

But because the top people of glamour town dare not and will not rest, they get “Hollywood nerves.” Subtract only a few items from the Russell list and you have the average woman star’s life. Insomnia and ulcers are practically occupational diseases of both men and women before the camera.

The majority stagger through, some dying after having burned out much too young, as did that most gifted of producers, Irving Thalberg. But some nerves, probably fortunately, finally get so tense that they nearly break, as did Roz Russell’s, or currently as are Alan Marshal’s.

He is a very sick man, this charming, quiet Alan Marshal, and, tragically, a most typical case of the tricks Hollywood nerves can play. With his great success in “White Cliffs Of Dover” his career was about to shoot into the heights he has fought so long to attain. Following “White Cliffs,” Alan was cast for the finest role yet given to him, that of the wounded soldier in “The Enchanted Cottage.” Just a few days after that picture started shooting he collapsed.

That was more than six months ago, and Alan Marshal is still on the sick list.

In private life he was a most unactorish actor, very shy, very inhibited, living with a quietness that could almost be called stillness, madly in love with his beautiful young wife, Mary.

You can’t stop most actors from talking about themselves, but Alan was the re verse. He was literally incapable of talking about Alan, but he’d rave on about Mary for hours, her beauty, her wit, her charm. “She is the one, not I, who should be in pictures,” he’d say time after time.

Did he believe that, down deep in his heart? Did he really not want to star? Or was he secretly hurt and chagrined that what David Selznick had told him years ago proved true, that he must wait for maturity for his success, that he was basically an “old” actor.

Your guess is as good as Hollywood’s, for even in his illness, Alan isn’t talking, not even to Mary whom he loves so passionately. His doctors say it won’t be too long before he is entirely well. Rest is all he needs, but it is sad that he had to become so ill before he’d take it.

Judy Garland should rest, too, for Judy is one of the great army of insomnia victims. Like Barbara Stanwyck, she may average an hour or two a night, but that is all, and her corresponding weight loss is appalling. Stanny has adjusted to the non-sleeping in such a manner that, except for her extra-thinness, she doesn’t otherwise seem to notice it, but with Judy she gets so weary that she frequently has hours on the set when she cannot remember a single line or one song cue. Yet Judy doesn’t relax. The unhappiness is very visible in her delicate face.

Strangely enough the insomnia and the extreme “nerves” hit the girls most often, while the stomach upsets hit the men.

Perhaps the necessity of maintaining a chic appearance, with the fitting, the hair-dressings, and the dieting all this demands, puts an added burden on the girls that cracks them up more often. The men are the ones who can’t eat more than half the time, and then only the blandest of diets. But Alan Ladd is one male who combines both the inability to eat and the screaming nerves when the production schedules get heavy. It is this combination that keeps him so bone-thin despite his magnificent shoulders and bulging muscles and it is to be seriously doubted if Alan could stand up under it at all if Sue Carol Ladd didn’t spend her every waking moment looking out for his health in every way.

All her life, when things got emotionally bad for Greer Garson, she has retreated into illness. It wasn’t conscious acting, but her nervous reactions took such extreme forms as this: Just after her first marriage in England, she realized she was horribly unhappy, that she had made a bad mistake and that she and the man she had wed could never be anything but wretched together. This realization so shocked Greer that she became very ill, went to bed for weeks, and when she finally was able to be up and around was still so incapacitated that for months she could walk only with the aid of a cane.

Today, in Hollywood, let Greer become upset and she becomes ill. Sinus troubles her painfully much of the time, but she has other small aches and illnesses too, which keep her abed. She is important enough that the production schedules wait for her; in fact, extra days are allowed in all of them for just these Garson upsets. At all times, she lives most quietly, resting constantly, conserving her strength.

They allow extra shooting days in the Colbert schedules, too, because, as every studio where she has worked knows, once let the production start, and Claudette will get an attack. The attacks vary and may come from anything, but undoubtedly are nerves, always newly disguised. As a result, the vivacious Colbert is a real hypochondriac. She is allergic to almost everything. Let a knife be in the scene and Claudette is sure to cut herself—and seriously. If she has to go through a door, the chances are excellent that, sooner or later, she’ll slam it on a finger. She falls over light boxes, she bumps into mirrors. She can no more help it than she can help breathing. A psychologist would undoubtedly say it is her way of attaining the relaxation her nerves demand. Like Garson, she is big enough to get away with it. Also, like Greer, she probably has no awareness that ninety per cent of it is her nerves acting to protect her.

The case of Susan Peters has pathetically different angles. Susie is a girl who puts love ahead of her career, and except for the fact that her husband Dick Quine is in service, she probably would give up acting altogether. Up to time of her recent accident her illness came mostly as a result of the high pressure of production schedules.

After “Random Harvest” Susie looked like a real star and the studio knew it. Susie had flu just as “Random Harvest” finished and took sulfa to get over it. She found that sulfa does get you over the flu, but then you have to get over the sulfa. Susie didn’t have time to do that because she was immediately cast for “Sorority Row.”

To begin with, the picture wasn’t worthy of her, since it was a B, but just because it was a B it had to shoot fast. One of the big scenes was a rain scene which meant Susie had to be soaked with hose-thrown water for two days. She contracted a heavy cold. To complicate things, she was newly wed, and knew her husband was soon to be shipped away.

Then she discovered the beautiful news that she was going to be a mother. Exhilarated with that knowledge, she told herself she could endure anything: Her cold, the daily schedule, the calls for make-up tests at night for “Song Of Russia”; the loneliness she knew she’d have to face when Dick was gone.

“Sorority Row” finished and she rushed into “Russia,” but her cold hung on and gradually got worse. “Russia” completed, she became truly ill and woke one morning to accept the awful knowledge that she was no longer going to be a mother.

It was months before she could make her latest picture, “Keep Your Powder Dry,” which is about the WACs. Then came the tragic accident in which she was shot while on a hunting trip with her husband. All Hollywood is rooting for her recovery.

That superb young actress, Teresa Wright, wife of Niven Busch, the writer, lost her first baby prematurely, also, and thus when on the first of this past December she was successfully delivered of her second child, Hollywood’s rejoicing was very great and very genuine. Yet long before maternity added to the burden, the delicate Wright nerves were troublesome. A very great artist, here is a girl who actually is in torment from shyness. Deeply in love, she hates meeting new people. She wanted—and wants—her home, her husband, her children. Despite her acclaimed mastery at it, everything about her career terrifies her. Whether she basically wants the career, whether she will continue to pay the high “nerve” price for it, no one is sure.

But of one thing there is no doubt. If she does continue, there will be no reduction of the cost to her, just as there is none to the host of other Hollywood stars who are paying in physical strength for their fame.