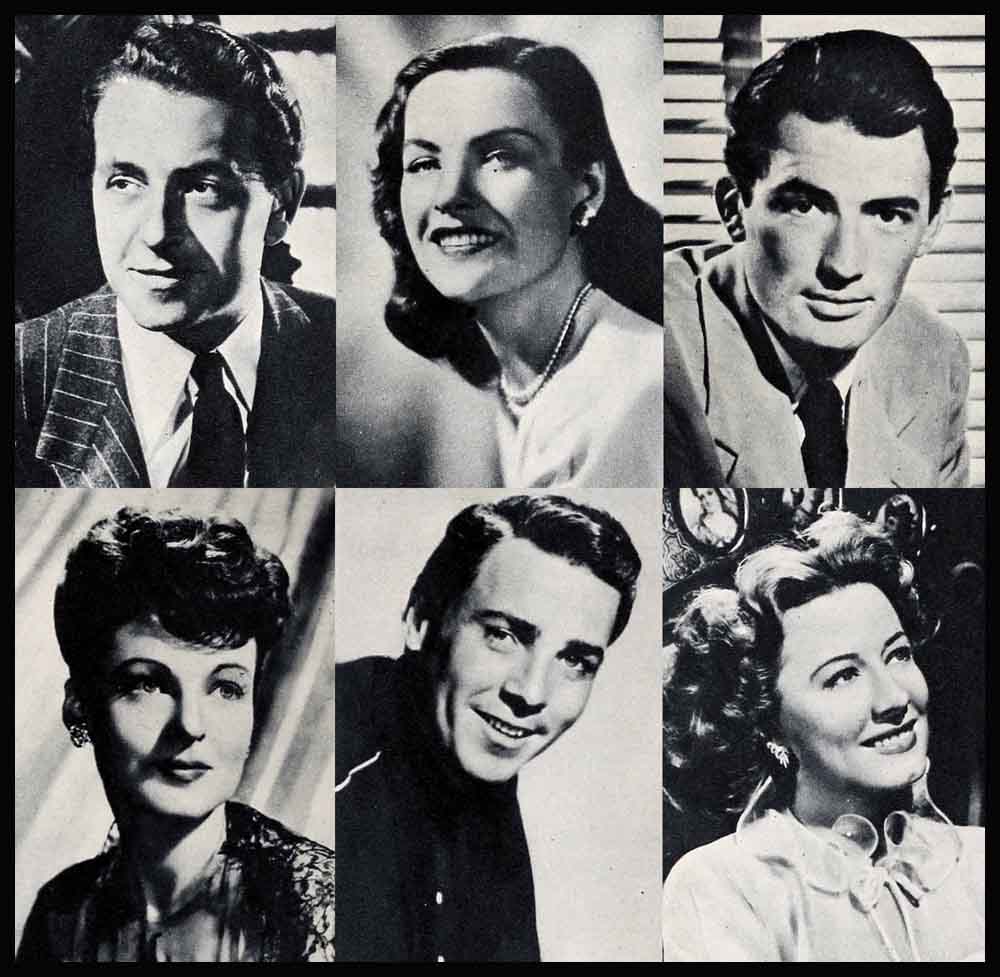 I didn’t make one boner, but two full-fledged ones recently. On the set of “Together Again,” Charles Boyer introduced me to a pair of gentlemen who were visiting the studio. At the end of the day, Charles asked whether he could drop me home and I accepted, as my car was at the garage being repaired.

Charles’s friends drove along with us. On the way down Hollywood Boulevard, one of the gentlemen offered me a cigarette which I declined, saying, “I don’t smoke.” He looked at me rather strangely. A few minutes later the second man suggested we stop somewhere for cocktails. I thanked him and again declined, stating that I was in a hurry to get home and besides, I added, “I don’t drink.” He, too, looked at me strangely.

Next morning on the set, Charles burst into laughter when he saw me. “So you don’t smoke and you don’t drink,” he chided. “No,” I answered, “I don’t and you know it.” Charles continued laughing and I demanded to know what was so funny. “Oh, nothing,” he said, “only one of the men you met yesterday is president of a cigarette company, and the other is one of the largest distillers in America!”

One day a few years ago, before I became an actor, I walked into television station WNPB in New York City. I was on my way to try to sell a radio script I had written when a man came up to me. He explained that they needed an announcer in a hurry and he’d like me to audition for it. I’d never done any television work before, but I saw no reason to refuse. I auditioned by reading want ads for him. That got me the job as master of ceremonies on their Radio City Matinee each day. It was in that job that I pulled my worst boner.

One day I was interviewing a prominent interior decorator for the television audience. I don’t know what I could have been thinking of, but I found myself saying: “I would now like to introduce Mr. George McAllister, the famous inferior decorator.” Television is a wonderful thing, but it certainly boomeranged that day. Because, of course, everyone listening in could see his expression—and believe me, that expression must have scared every housewife on Long Island!

I’ve pulled a lot of boners, but I think the worst one happened when I did a picture on loan-out to Columbia one time.

The lot was strange to me, and when lunch time came the first day I meant to follow my fellow workers to the commissary, but was delayed. When I finally started out, there was no one to follow, so I asked directions from the gateman. Unless you’ve been on a studio lot, you probably can’t imagine how confusing the directions can be. Turn left—turn right—turn, turn, turn. That’s the way his directions sounded to me and I was very relieved when after trying to follow them, I at last found myself in a room which had a long table and saw several men sitting there busy with menus, so I sat down, too, and gave my order.

I was so engrossed that I didn’t notice until after I ordered, that absolute silence had fallen on the gathering, and that most of the gentlemen were glaring at me. Mr. Harry Cohn, the boss of the studio, was seated at the head of the table and I smiled at him. I wouldn’t describe his answering expression as enthusiastic. I took another look around the room and then the truth dawned on me. I was in Mr. Cohn’s private dining room—sitting in on his midday conference!

One of my most embarrassing moments occurred during the World’s Fair in New York several years ago. I hadn’t gotten a break on the stage yet and I was working as a guide for Rockefeller Center. My job was to take parties through the buildings, including a few minutes’ stop in the balcony of the Music Hail, which gave the people a chance to catch a brief glimpse of the show.

One day when I was more bored with my job than usual, I sat down in the balcony with my party and relaxed. I relaxed too completely because, I regret to State, I fell asleep. My party was delighted, of course, because they had a chance to see the show free. Needless to say, no one woke me up.

About an hour later, I came to. By the time I got back to my starting point, several parties were lined up, waiting for their guide. My boss, of course, was purple with rage and I was ready to admit that Peck had really pulled the prize boner of all time.

I pulled my worst boner on Christmas of 1943. My husband, now Major Kenneth Trout, had been in the Army only a couple of months and was in town on leave. I decided to give a party for him, inviting as many of my husband’s Army acquaintances as my house would hold. Ken’s commanding officer, a colonel, happened to be in Hollywood at that time and I invited him, too.

By the time everyone had arrived, there were so many officers present, I was confused. I couldn’t remember how many bars was a captain, or what rank was which. The only thing I was sure of was that I mustn’t neglect Ken’s commanding officer. I was anxious to make a good impression on him and made it a point to introduce him to everyone. The only trouble was that I finally became so thoroughly muddled during the introductions that without realizing what I was saying, I introduced him as “Corporal”!

My pride in my dog Maxie caused my worst boner. I had just arrived in this country from England with my wife Lisl and we were going through the United States Customs. As an alien, in wartime, I had been permitted to take only a small sum of my money out of England and, not being too practical, I had used up most of what we had brought on the boat Corning over.

Lisl and I both agreed that we must watch every penny from that moment on. We had barely enough to get by. While we were waiting for our luggage to be inspected, a man admired our little dog.

Maxie being my pride and joy, and the man being friendly, I entered delightedly into a long history of our Scottie’s pedigree, making it up as I went along. Because the truth is that while Maxie is a thoroughbred, the blue ribbons I was figuratively pinning on his chest existed only in my imagination. By the time I was through, the man seemed very impressed. I found out why when he said: “It will cost you plenty to bring him into this country.” I learned then, to my very great discomfort, that he was the customs inspector for dogs!