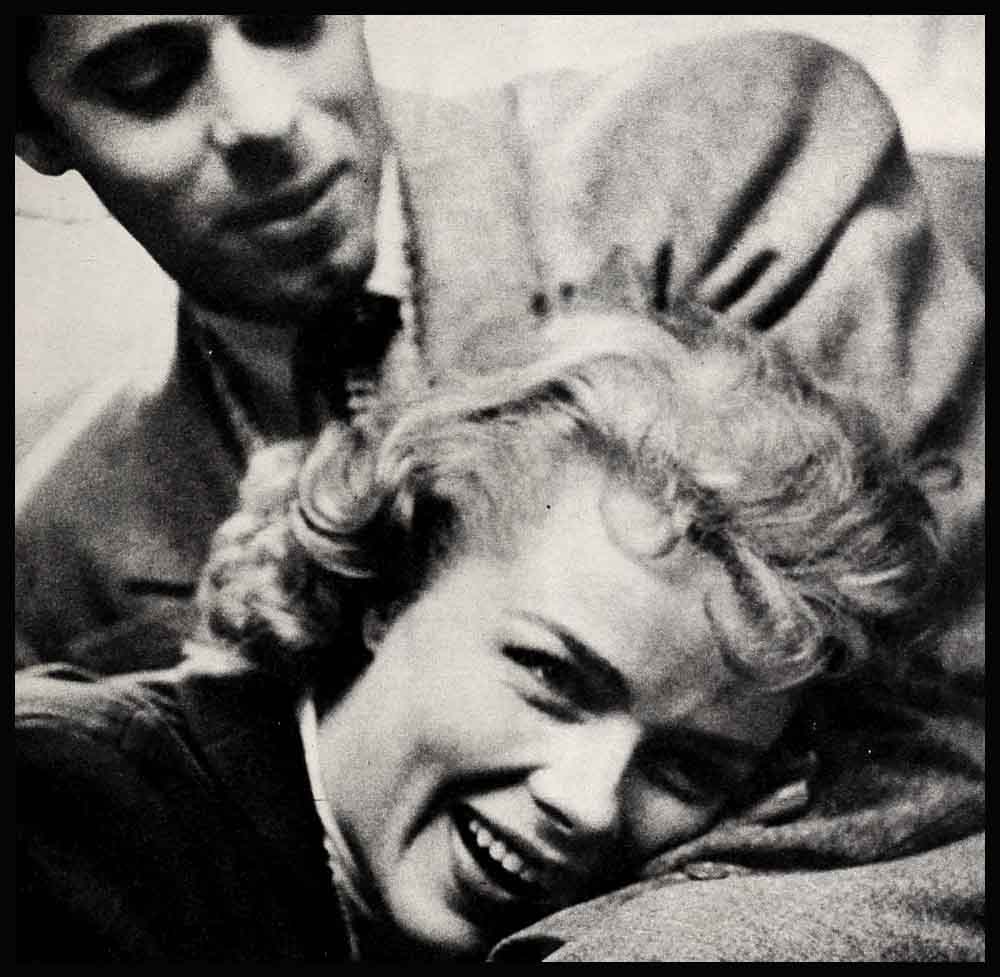 This is the story of a man and a girl—a girl with dancing feet and stardust in her eyes—and a man who believed in her because he had dreams—and she was part of them. . . .

It began about two years ago. Milo Frank, visiting a studio and glancing through an office door, saw a young girl hurrying along the corridor, her arms laden with dancing costumes. In the dim light, she seemed to have gray hair. Unusual, he thought, for such a young girl. He tried to dismiss her from his mind, but a few moments later he was rushing down the corridor after her.

He caught her at the door. In another minute she well might have gone out of his life forever.

He could see now that her hair wasn’t gray, but spun gold. Gray-blue eyes, friendly but skeptical, regarded him intently.

“My name’s Sally Feeney,” she answered. “I’m a dancer. I’d like to be an actress. And I don’t think I’m greater than Garbo.”

“Sally Feeney,” he repeated the name with amusement, “Well, it has to be your own. No one would pick that name.”

They talked and she asked him back to the set where she was teaching Anthony Dexter his dances for “Valentino.”

“I was so blue and discouraged that day,” Sally recalls; “nothing seemed to be happening And I had responsibilities and I was ambitious. I’d signed with M-G-M as a stock dancer, so I’d bought a little house near the studio and moved my family up from San Diego. Then the studio dropped me.”

It was business, of course, for Milo to notice pretty young girls who looked as if they might have talent. But Sally was special. He couldn’t get her out of his mind. And he didn’t know how to reach her. Finally, he called the Screen Extras Guild and got her address and sent her a wire: “Please call me. It’s important.” But there was no response. He wired again. Then, one night, just as he was stepping out of the shower, the phone rang.

“This is Sally Feeney,” the voice said. “You sound funny. Am I bothering you?” “Yes—that is—no!” Milo hurried on with his explanation.

He- didn’t know how much talent she had. But he’d been right before with players like Marshall Thompson, Hugh O’Brian, Adele Jergens, Robert Patten. The next day, Sally came to his office to read.

“I don’t promise you anything,” he told her when she had finished. “What we want may happen in a week. But I ask you to be patient and to believe in me and what I do—because I believe in you. Otherwise I would not want you for a client.”

Sally, who had made a practice of signing with no one, signed on the dotted line. And, to celebrate their new partnership, they went for dinner to a funny little restaurant near the beach.

“Hot soup—and a phone book,” was the answer. With a pad and pencil before them, they sat until closing time trying to decide on a stage name for Sally. Once they almost settled for Sally Fisher. Then they came up with “Sally Forrest.”

And over and over again, as they sat there, someone was playing “Love Walked Right In” on the juke box.

“I suppose I was in love with Milo then,” Sally reflects, “but honestly, I didn’t know it. I just remember how pleased I was with his good manners. And how touched I was by his enthusiasm and honesty.”

Milo says: “Sally impressed me because she was the first ambitious person I’d ever met who didn’t seem ambitious. She wasn’t any dominating, hard-hitting career girl. On the contrary, she seemed so naive and trusting my heart went right out to her.”

After that, Milo was always on the phone calling someone about Sally. But he couldn’t arouse any enthusiasm. She was too small, too young, too inexperienced. She could dance, but could she act? Besides, she wasn’t a “name.”

“Sally behaved sensationally,” Milo says. “Never nagged or complained. She waited for me to call and tell her things.”

Finally, one producer who knew Milo better than the rest, said that he wanted to talk to him about Sally. “This has to be it,” Milo told himself exultantly. He rushed to the producer’s office.

“I like you,” said the producer, “and I admire your ambition and your faith in Sally Forrest. But I’m going to give you some advice. Sally’s charming and pretty. But Hollywood is filled with charming and pretty girls. Forget about her before you make a pest of yourself.”

Milo said nothing to Sally. Endless times his hopes rose, then fell again. Finally, he landed her a test with John Derek in “Knock on Any Door.” Sally, facing a camera as an actress for the first time, was scared. She called Milo and he rushed over and stood by. She didn’t get the part. But Milo now had a test to show to other studios. Except for a two-day bit in “Mr. Belvedere,” Sally hadn’t worked in a year.

Then the tide turned. Emerald Productions were looking for a girl to play the lead in Ida Lupino’s “Not Wanted.” Sally read for them, then went to Ida’s house and read for her. Milo thought he’d go mad as he waited in a phone booth. Maybe Sally had fainted. Maybe she’d lost that telephone number. Finally, the bell rang.

“I got it!” She was laughing and crying.

When “Not Wanted” was finished, Milo found all the studio doors open. Suddenly they all had parts for Sally and Sally was right for every part. It’s happened before in Hollywood and it will happen again. M-G-M seemed the best place for her. (That was the right decision, for, after two minor roles, Sally was given the lead in “Excuse My Dust.”)

They discovered they were in love in the midst of the excitement they knew as Sally made one picture after another and became more and more important. Milo, in his wise way, had hired a press agent for Sally, who suggested she go to premieres and parties—be seen out socially.

“So-and-so wants me to go to Ciro’s tonight,” she telephoned Milo one day, naming a popular wolf-about-town. “You’ve been urging me to go out, Milo, so I hope you won’t mind.”

“But I do mind, very much,” he heard himself saying. “I don’t want you to go out with anyone—except me.”

He hadn’t planned to say it. Several nights later he took Sally to his family’s house. They were giving him a birthday party. Sally was disappointed because the new dress she had ordered hadn’t been delivered. Milo was tired because he had been detained at the office. They drove in silence. Suddenly he reached into his pocket, and handed her a small, square velvet box. Inside was the ring.

At first they thought they’d keep their engagement a secret. But you can’t look at each other the way they do and expect people not to notice. They hope to be married soon–maybe even before you read this. Milo was all for bundling his dream girl into his convertible and heading for the courthouse. But Sally wants the works—a real wedding. Definite decision depends on the M-G-M production schedule.

Says Milo: “Either I’m a fatalist or a fool, but honestly, I believe there was some power or invisible force that guided me to Sally that day.”

Sally has her own theory: “You know, Milo and I have always felt that we had met before. And I believe I know when and where it was. During the war years I used to go to the Coronado Hotel in San Diego where they had tea dances for the boys in uniform. Milo, who was a first lieutenant in the Marine Corps, used to attend those dances. I recently read an item in the diary I used to keep at that time. And this was it: ‘Danced with a tall, dark-eyed Marine Lieutenant today. He was very courteous and very nice. I liked him and wonder if I will ever see him again. (P.S. I hope so.)’ ”