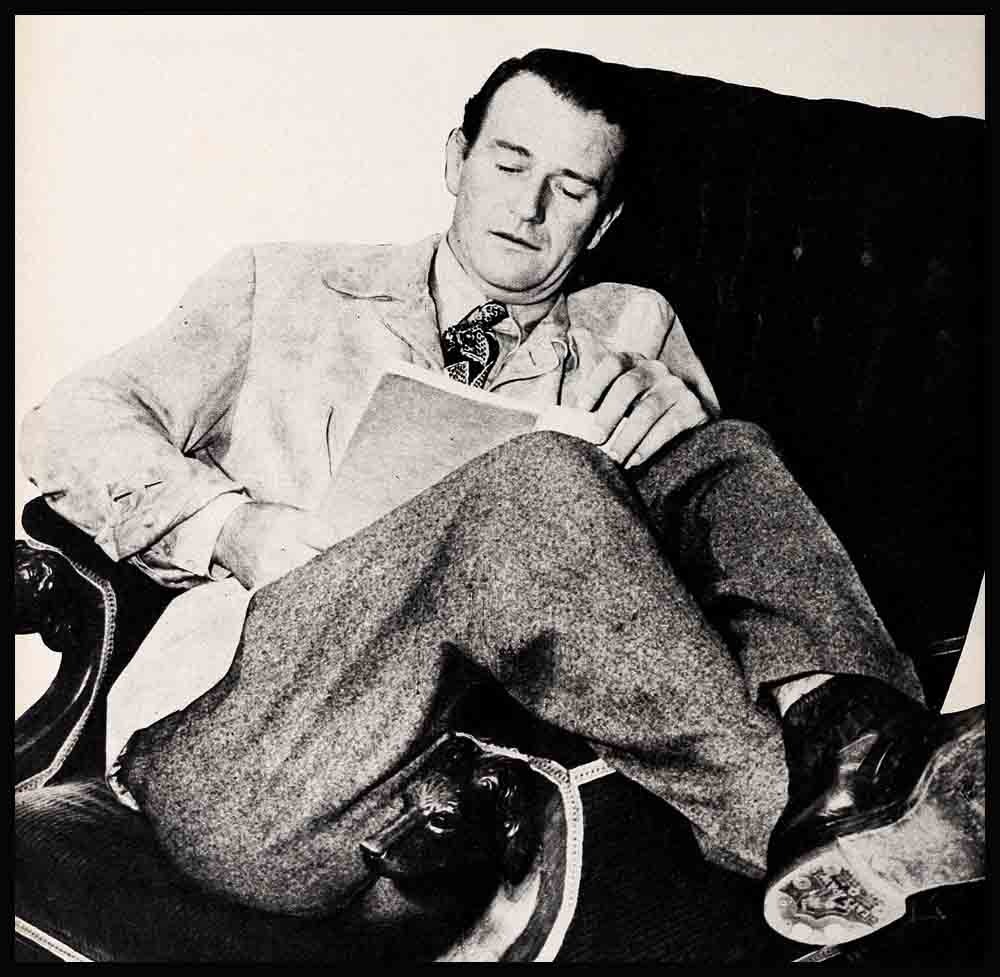 I can’t think of a better time than now—when Duke Wayne is sitting on the top of the heap—to say that he’s my boy. Always has been; always will be.

I’ve liked Duke’s style from the very first time I met him, in 1928 when I went down to U. S. C. to hire some big hulking fellows to play football in “Salute,” a film which I was making at the U. S. Naval Academy at Annapolis. Duke wasn’t as big or as old as some of the other players I talked to. He was just a rangy, overgrown boy who looked too tall for his clothes. But there was something about the confident way he carried his body that caught my eye. I liked his easy, unaffected grin, too. So that night in the fraternity house I asked him to take over the job of selecting the other boys to go to Annapolis with the company. I’ve never been sorry, for that was the beginning of a relationship that has been one of the joys of my life.

The following summer, Duke came out to the location of a Western we were making out in Newhall and hit me up for a job. He began driving a prop truck and before the vacation ended, he was an assistant prop man. He liked the work so well he never did get back to college, which probably saved a lot of wear and tear on the USC campus.

Duke’s energy always has been inexhaustible. He’s always seemed to have before him the perpetual challenge of the big man—to do everything better, and harder, and longer than anyone else. He was never afraid of work. But I recall that he almost fell over from fright the first time I asked him to fill in for a bit player who’d failed to show up.

Duke wasn’t very good in his first few screen performances, particularly in the love scenes. It isn’t easy to be romantic with your foot in your mouth. But even then, he had the tawny ease which makes for great screen presence.

Today, Duke is a veteran of more than 150 motion pictures, a respected performer, and one of Hollywood’s most valuable names at the box office. During the past two years, he’s climbed from a position of obscurity to the very top of every survey conducted. Every studio in town is convinced that having Duke in a film is the positive insurance of its success. I have always thought so. Often I have wondered why both the public and the studio executives were so slow about catching on.

You see, it isn’t enough for an actor to look the part and say his lines well. Something else has to come across to audiences—something which no director can instill or create—the quality of being a real man.

To this day, I would not call Duke an actor. He is a reactor. Put him in a dramatic situation and he reacts to it as he would in real life. That kind of performance makes for fine, believable motion pictures.

That is largely why, years ago, I wanted John Wayne to play the lead in “Stagecoach.” He was by no means a finished performer, But he was the only person I could think of at the time who could personify great strength and determination without talking much. That sounds easy, perhaps. But it’s not. Either you have it or you don’t.

In all of the adventure films which he has made for me—“Stagecoach,” “The Long Voyage Home,” “Fort Apache.” “She Wore a Yellow Ribbon,” “Rio Grande,” and others—Duke’s power as a man has contributed immeasurably to the integrity of those films.

Even when Duke was a brash youngster just out of school, I enjoyed his company. I have tried a million times to get his goat but have achieved it less than a hundred, which is not much of a batting average for an Irishman.

I have spent a large part of my leisure time fishing with Duke in Mexican waters. You can learn a lot from the way a man conducts himself on a fishing trip. Not necessarily how he spits on his bait, or hauls in a fish, or even how many fish he catches. It’s more than that. I think it’s a question of a man’s capacity to enjoy himself, to relax completely, and throw off his pretensions. Duke has always been able to enjoy life . . . to swallow it and digest it in big, unchewed pieces. Depending upon the circumstances, he can be a roughneck or a perfect gentleman. He plays a hard-driving, if somewhat costly, game of poker. He has fought enough fights to prove rather conclusively that he is not a man to fight with. And he has, without any apparent effort, learned to handle himself with dignity and charm.

I’m glad to be able to say that my affection for this boy has not been wasted. In Hollywood, it would be a dull day indeed if he did not at least once a day drop by my office, or call me on the phone, to discuss a problem, an idea, or a piece of news. I have come to expect it as a part of my life. I trust it will surprise no one to have me say that Duke has a bubbling, vital mind and an enthusiasm for new projects that would make him a welcome friend to any man.

Perhaps it is unduly sentimental of me to mention that for years Duke has been trying to get his hats to look as battered and well-worn as mine. He tried sitting on them, soaking them, jumping on them and, lately, exchanging them for mine when my back was turned. They still don’t look comfortable on him. A hat, I keep telling him, must mature with the man before it looks as if it belongs on his head. Still, I can’t think of another man with whom I’d willingly trade hats.

By keeping his eyes and ears open, Duke has come to know a respectable amount about the way motion pictures are made. During his twenty years in this business, he has been a prop man, electrician, stunt man, extra, bit player, assistant director, producer and a star. It would not surprise me to see him direct a movie that would make people sit up and take notice.

During the past two years, Duke has set a pace for himself that would have worn an average man down to his shoelaces. In that time, he has worked in a half dozen films and managed the production details of another. Last year, I could not help but laugh when he installed a gym outfit in his garage because he was too busy to go to the club—and then found that he was too busy to use it. But if physical fitness were the sole measure of our span, Duke would probably be the last man on earth to perish.

Nevertheless, he has begun, in recent years, to pay particular attention to his health. Every now and then he will talk himself into feeling peaked. He will walk around as though he were on his last legs. Then he will drive down to a rest home near La Jolla and spend a couple of days. When he comes back to Hollywood, he rushes out to tell everyone he meets that he never felt better in his life. That must be a magic place.

In fact, he has become so busy of late that he will not even allow himself to do the things he really enjoys. Except for his brief vacation to Santa Catalina last year, Duke has steadfastly resisted the temptation of such old pleasures as hunting and fishing. Several years ago, however, he decided that what he needed was a purposeful hobby that would allow him to do something creative with his hands. He looked in vain until one day when he met a screen-writer friend who made ceramics in his garage. Ceramics, Duke decided, were exactly what he had been dreaming of. So he asked his friend to drop a gentle hint to his wife Chata, that he would like a ceramics outfit for Christmas. Although she had already bought Duke’s presents, Chata went out and purchased a kiln, shelves, stilts, pyrometric cones, clay and modeling tool and gave them to her husband.

The other day, the screen writer happened to meet Duke at lunch and inquired how he liked working with pottery by now. Duke told him that he has been too busy to try it yet but that the kiln made a fine place to keep his old shoe.

On every motion picture, there is at least one day when nothing seems to work out right. A horse will whinny just as the hero is whispering significant nothings into the girl’s pink ear. The stunt men will miss their cues. Or the sun will go behind the clouds just as the camera starts rolling on the most complicated long shot of the day. When things are going wrong, Duke is a mighty fine man to have around. He will run half the length of the valley to tell the second unit that we are planning to shoot another take. He rarely asks a man to do a job he can do himself, and for that, he is well liked by the crews he works with.

The background scenes for our best Western dramas have taken us into the most desolate country imaginable. The scenes for “Rio Grande” were shot near Moab, Utah, and Duke was given another opportunity to roam the wilds. I do not think that he would ever be happy if his acting career were confined to sound stages; it would be like caging a mountain lion. He needs the out-of-doors measure himself against.

When Duke is working in close quaters on a sound stage, it requires a real effort to keep him sitting still. Some where I have read statistics which claim the average housewife walks three miles a day in her home. Duke could pace that off while waiting for his next take, and smoke a half dozen cigarettes in the bargain. I could not think of a more horrible way to torture him than to tie him so his movements were completely restricted and then show him motion pictures of people walking. It would drive him crazy.

He is just now at the time in his life and in his career when all of the honors which Hollywood and the movie-going public can bestow upon him, will begin coming his way. Last summer, I went over to Reno, Nevada, with him to attend John Wayne Day, during which he received that city’s annual award for the best Western performance of the year in “She Wore a Yellow Ribbon.” He was infinitely more interested in the people he met there than in the trophy.

“Pretty thing, isn’t it?” he said, handing me the trophy to inspect. “But not so important as the idea behind it.”

Frankly, I don’t believe that there is an honor, a testimonial, or an award which Duke cannot bear in good grace, and like the true gentleman that he is beneath his roughneck exterior. Years ago, just before we made “Stagecoach,” I told Duke that he had a great future ahead of him. If it were not already so obvious, I would tell him the same thing today. He’s my boy.