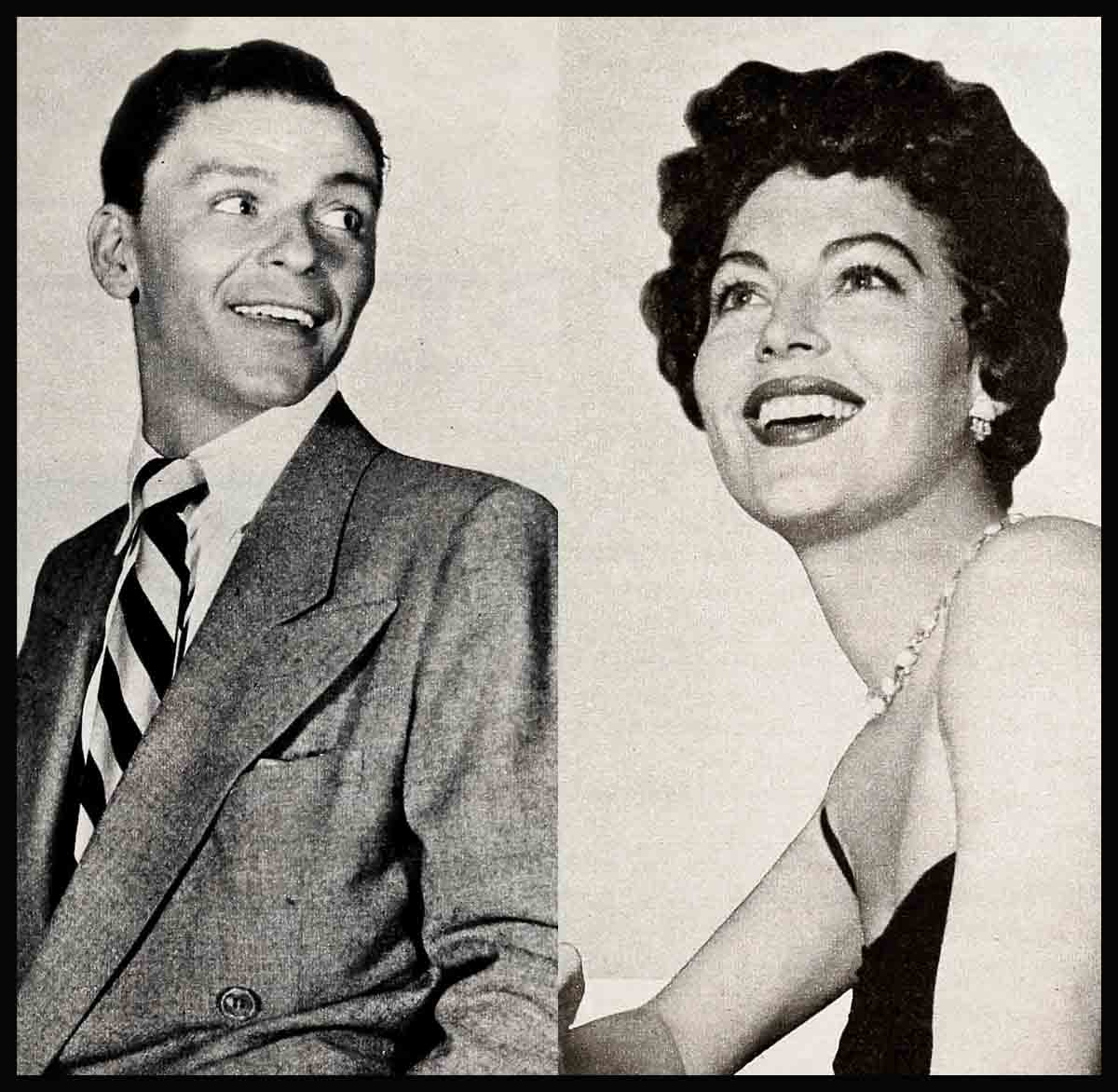 You don’t have to read the newspapers very carefully to know that there’s no diplomatic situation quite so touchy as truce talks. For all the sweet words, the fire- works always seem just about ready to explode. And what’s true of nations is true of people—especially if their

names happen to be Ava Gardner and Frank Sinatra.

Ten days after Ava’s arrival in New York, she and Frankie were deliriously happy. They had moved into a lavish hotel apartment with a sweeping view below them of Central Park. Ava was convinced that Frankie was the most terrific, most sensational, most talented guy she had ever known. And the sweetest husband. And as far as Frankie was concerned, Ava’s tenderness was the answer to a crooner’s prayers.

She had, for the moment, abandoned all plans to go anywhere or do anything that didn’t involve Frank. The only thing she could think of she really wanted to do in this world was to settle down quietly and raise a family.

This was a far cry from the heated battles that had reverberated throughout Manhattan and across the Hudson into New Jersey for the days preceding this last, most loving reconciliation.

The New York altercation had started weeks earlier—and in England, actually, not in New York. Frank had flown over to join Ava, who was then still working on “Knights of the Round Table.” The picture was almost finished, except for a few last-minute shots which were still to come.

Frank, who had made his rush flight before starting personal appearances in the States had to be back in time to open in Atlantic City. He had no choice in the matter. And he wanted Ava, who was idle for a few days before her final scenes were to be made, to return with him, spend those few days here, and then go back to England again to wind up her picture.

But that, she said, she couldn’t do. Instead, she went to Spain to rest. And Frank, who felt that it wouldn’t have been any more tiring for Ava to fly to New York than to Spain, returned—alone and hurt.

Each thought the other was inconsiderate, unreasonable.

And when Ava did return to the States shortly afterwards, still piqued, she didn’t cable Frank that she was coming. Result: He wouldn’t phone her to welcome her back. And she, of course, wouldn’t get in touch with him.

They stayed in separate hotels, each waiting for the other to give in—and neither making any effort to make the first peace gesture.

This all coincided with Frank’s opening at the Riviera, the night club that hangs high over the Hudson on the Jersey shore, looking across at the dazzle of Manhattan. His reception there was tremendous. Following immediately on his sensational acting success in “From Here to Eternity,” it was proof conclusive that the little guy everybody had been worrying about was anything but through.

The place was jam-packed with celebrities on opening night. Everybody who was anybody was there—everybody, that is, except the one celebrity who mattered most to Frank: Ava Gardner. She was off seeing the opening of a Broadway show.

Frank, who had keyed his program to her, who had sung songs with lyrics like, “Why try to change me now . . . I was always your clown . . .” was crestfallen.

Newspapers made much of the public snub. Columnists leaped with zeal on this latest episode in the turbulent Gardner – Sinatra marriage. And close friends—and some not so close—tried to bring about a reconciliation.

One well-known commentator went so far as to try to stage a patch-up over a national hook-up on his TV show. He lined Frank up, telling him he wanted to ask him some questions on the air about his role in “From Here to Eternity,” and then he mentioned in passing that he thought “it would be nice if Ava could be there too.” Then he went to Ava herself. The recalcitrant wife was more recalcitrant than ever. She refused, in no uncertain terms. “This is a personal matter,” she said. “It’s my marriage—and my life—and it has nothing at all to do with your show.”

The actual reconciliation came about through a series of steps, the first of which was a small dinner party given by Frank’s mother in her New Jersey home. She and Ava are close friends, and she knew that if she invited her sultry daughter-in-law to a home-cooked Italian meal, Ava would not refuse. Nor, of course, would Frank.

Ava, the story goes, sat in the Sinatra dining room nervously, waiting for Frank to arrive. He did, but only for a short while, rushing in between his Riviera shows. If they left together that evening, inside sources neglected to mention it.

In the meantime, their closest friends were appealing to them, reminding them how deeply they both love each other, pointing out that no love as great as theirs deserved to be sacrificed for childish pride. And in a few days, all was well.

Ava appeared at the Riviera for the first time, and Frank jubilantly sang twenty-four love songs with scarcely a pause for breath. Immediately thereafter, they moved into that large hotel apartment.

It was then that Ava told friends that the only thing in the world she wanted was to be with Frank and that, as far as she was concerned, her career—if she was to have one at all—was definitely going to play second-fiddle to his.

She talked happily of Frank’s visit to Africa when she was there shooting “Mogambo” with Clark Gable, and with affectionate wifely pride told of the shower Frank had built for them there.

“Before he arrived,” she smiled, “we were using those canvas folding tubs, and taking a bath was something of a production. But he was wonderful. He tricked up a rubber hose, made a top for it out of an old tin can he found around, and punched holes in it so it would spray. Then he attached the whole thing to a thingamajig so it would reach the outlet for the water. He even built a platform to stand on.”

And she spoke a little sadly of the London apartment that had been meant to be a home. “You see,” she said, “we wanted a place to live—a real place, with a kitchen. Frank went over when I was still in Africa, and he hunted and hunted. You know, places in London are still hard to find. But this one was big—and did the trick.”

Or almost did the trick, she might have added. She and Frank were happy there, when they both happened to be there at the same time. For the most part, Ava said, “We just stayed home. We didn’t do much gadding about, just kind of sat around and let ourselves be ourselves.”

But their separate commitments kept them apart too much of the time. And the beginning of that big blow-off came in that very “home.”

Now, however, it looks as though things might have simmered down to stay. Frank’s career is booming as it never has before. He is bombarded with personal appearance and TV offers, and he can pick and choose between several plum movie roles. As things look now, he will probably go right into Elia Kazan’s independent production of New York waterfront life, unless he’s rushed first into Twentieth’s “Pink Tights” opposite Marilyn Monroe. Or Columbia may win him over with their offer for him to do “Pal Joey.” And after that, he’s slated to co-star with Ava—a longtime dream for them both—in M-G-M’s “St. Louis Woman.”

Ava, in the meantime, is just sitting tight. When she left Europe, she was considering going back very soon to make any one of several foreign films that had been offered her. But the new status has made her turn thumbs down on all such propositions.

The only thing that will take her abroad and away from Frank now, she says, is an absolute irrevocable order from M-G-M, to whom she is under contract. And then, she adds in a quiet voice, if she were to become pregnant (which is what she wants above all things), she would go on suspension to stay at Frankie’s side.

But that, for the moment, is in the realm of speculation. What is not is that Ava and Frank are happier than anyone has seen them for a long time. And nobody is rooting harder for that happiness to stick than Ava and Frank themselves.