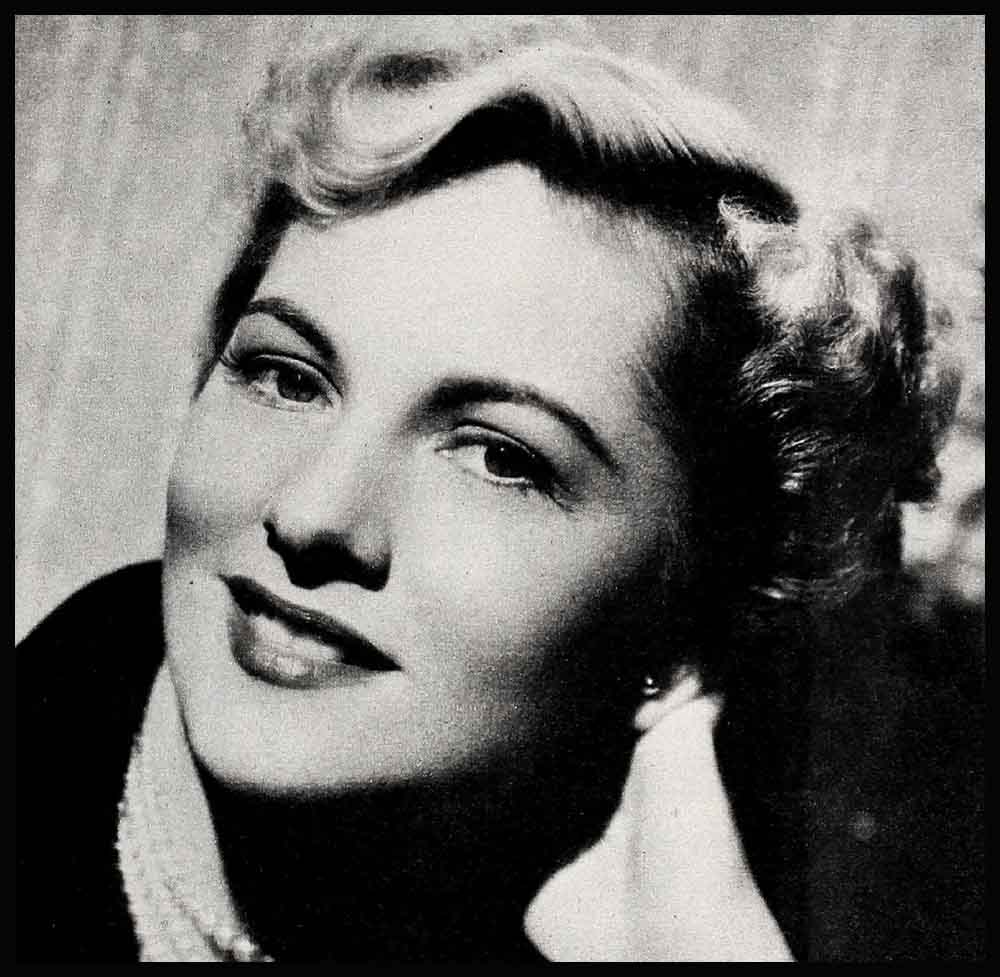 The Story Of A Divorce

“Willful desertion.” Joan Fontaine’s voice was barely audible in the nearly deserted Santa Monica courtroom. She was answering her attorney’s prompting to tell the Court why she was seeking her freedom from William Dozier.

“My husband left our home,” she added, “and he would not return.”

There was no tear in her eye or in her voice.

It was so early in the November morning that even the ever alert photographers were not on hand to take Joan’s picture as she testified from the stand.

She had, apparently, made up her mind to slip into court and end her marriage with inexplicable suddenness—inexplicable, at least, to Hollywood where the insiders have been wondering for months and months. . . .

With their love admittedly colder than a deep freeze and their marriage on the rocks with no hope of salvage; with no torch blazing unhappily in either heart—why did-Joan Fontaine and William Dozier wait two long years to get a divorce?

Joan could have married a dozen eligible beaus since the day she and Bill told the world their marriage was surprisingly ended, that they had not been happy for over a year. Neither would talk about this strange situation which kept them married for over two years when there was no marriage—husband and wife where there was no love—legally as one where there was no unity.

But Joan has just left my house—and I have her permission to tell this story for the first lime: Joan Fontaine and William Dozier could not get a divorce because they could not afford a divorce!

“This was the situation,” began Joan, briskly. “Bill and I formed our independent company, Rampart Productions, soon after our marriage. I made one picture, ‘Letter to an Unknown Woman,’ immediately. You know what happened.”

Knowing my movies, I realized she referred to the fact that while she gave a wonderful performance—the picture flopped at the box office. Rampart Productions was in the red from the start.

“Then we made ‘You Gotta Stay Happy,’ a comedy with Jimmy Stewart,” Joan went on. “I really should not have been working. I was pregnant with Debbie, our little girl. But I felt I had to work. Bill was leaving his position as an executive at Universal-International.

“When we ended our marriage for reasons which are strictly our own—we had planned on an immediate divorce. But before we even got started talking a financial settlement—the Government slapped a back assessment on income which was meteoric in amount—frightening, actually. The question came up: How much do I pay? How much does Bill pay?

“Of course, as a star, I earned more than he did as an executive—but, at the same time, half of the financial responsibility belonged to him as a full partner in our enterprises.”

Joan suddenly pulled off her hat and threw it on a chair, running her hands impatiently through her sleek hairdo.

How strange, I thought, watching her. Here is a woman, a famous star, who has just completed two important pictures, “September Affair,” a Hal Wallis production, also “Something to Live For,” a Paramount picture; envied by career- ambitious women all over the world for her success and the material things it has brought her. All fans believe movie stars are rich. They read of their fabulous salaries and think, “Oh, if only I could make in a year what she makes in a week, how happy I would be.”

It just isn’t natural to think of these gloriously successful women of Hollywood as feeling the pinch of not enough pennies to go ’round (even as you and I) or of being burdened with debts.

Being behind the scenes in Hollywood, I know how often this is true. But this particular problem is seldom aired in public because, as I said before, it is almost unbelievable to anyone who is not familiar with the situation.

Joan has always been frank with me. That is one reason I like to interview her. When she feels she cannot talk about a subject, she tells me so. If she had been guarded about this for two years, I surmised, some of the financial worries had lifted.

“Yes,” she agreed promptly. “After conference after conference, Bill’s attorney and mine finally reached an agreement about our snarled and complicated affairs. The road was clear for our divorce.”

“And so this retroactive tax assessment from the Government was all that held you up?” I asked.

“Believe me, that’s all,” she answered. Then she laughed. “Oh, I know—many have suspected that there might have been ‘a little spark of love still burning’—but you know better, Louella.”

Joan was suddenly serious again. “No, except for this gigantic money hassle there was nothing else to block an amiable divorce between Bill and me. As far as our little girl is concerned, well, in California the mother usually gets custody of the child, unless she is unfit. And I don’t think I am unfit,” she smiled. “Everything I hope to accomplish centers around Debbie.

“Fortunately, Bill believes Debbie is better off with me. He will be allowed to see her whenever he wishes. There has never been any trouble on that score.”

“Joan,” I backtracked over our conversation, “you said just a moment ago that the way is now clear to solve your money problems. How has the picture changed so much since you separated from Bill?”

“I have been working, saving, economizing to pay off as much as possible as I go along. Oh, yes, Louella—art is wonderful. But the artist is also a citizen, believe me. With every cent I make I plan to myself, ‘So much must go here—so much for this—so much for that. By being careful, I am gradually digging out.”

“It means cutting corners everywhere,” she nodded. “Bill and I had built a house that was far too pretentious for us. I would never have put so much in a home for myself. But we entertained a great deal in the early days of our marriage. Bill loved parties. They were expensive too, of course. I’m not blaming him any more than I blame myself for the hole we dug financially—but, oh, how I now wish I had had someone to say, ‘Joan, this or that is too expensive’ before I had to find it out the hard way.”

“But you are still living in this ‘white elephant’,” I reminded her.

“Because it’s cheaper,” she replied quickly. “The market on these movie-star mansions is not what it was four or five years ago. I have Debbie and the nurse. It is cheaper for us to remain there than to rent another place big enough for us and let the house stand idle. But you can bet your boots—I do not hostess any more of those champagne-and-caviar parties.”

The idea of a luxury-minded screen star going around turning out lights in rooms not being used or budgeting the family vegetables and groceries amused me—but it is no laughing matter to Joan.

Joan went on, “And along with everything else, I was lonely. For several months I did not go out with anyone. I did not want to. I felt restless, unsettled.”

“Is that why you went to British Columbia and ‘made up with your father’—as the papers put it?” I interrupted. You will remember the great to-do that was made in the press when Joan, who hadn’t been in communication with hex 73-year-old father in ten years, went to Canada to be with him on his birthday.

She shook her head. “I’m afraid the true story isn’t the sob story they made it,” she replied, frankly.

“I had gone to British Columbia on a trip. I happened to be in Canada for reasons other than my father’s birthday. But, because I was there, and because he is my father, I visited him on his birthday.

“My allegiance always has been with my mother-—and always will be. She is the one who cared for and raised me after my father left her. If I had known my visit would have brought on all those sickening sob stories—” She paused.

“Sometimes I think what has happened recently is for the best for me. I have learned the meaning of responsibility. I have learned to handle my own affairs. I have weathered the mistakes I made and shall never make again—because I ‘didn’t want to be bothered about money matters’.”

“Joanie, what about Collier Young?” I asked quickly. “Aren’t you thinking of marrying him as soon as you are free?”

She drew an imaginary sketch on the table with the end of a match as though weighing her answer. “How can I answer that? Collier isn’t yet divorced from Ida Lupino. He’s as much married as I am at this moment.”

“I like him so much I won’t even say I will not marry him if he is free, as I will be in a year’s time—and if we both feel as we do now. Collier has so much that attracts me. He is young, gay, charming—and yet, so solid as a human being. If neither of us had complications in our lives at the moment—we might marry.”

Suddenly, Joan laughed. “But, Louella—how can either of us know what the year will bring. I am going to tell you something which may surprise you:

“I obtained my divorce from Bill in California because it will take a whole year for it to be final. I want that time to think, and think wisely, about any future marriage. If Bill and I had been divorced immediately I might have been married a half-dozen times in the past two years. I mean that.”

I knew she was joking. There is a much too settled head on Joanie’s pretty shoulders for indiscriminate jumps in and out of matrimony. But there was an essence of logic in what she said as she went on.

“I’m susceptible to the idea of marriage,” she explained. “I’m a girl who loves a home, a fireside, and a man to come home to—and that’s the truth.”

I remembered how miserable Joan was when she and Brian Aherne, her first husband, parted. She had not been happy with him (same as with Bill) for many months before their official separation. But without him—also as with Bill—she missed him and the security she had felt as a wife.

As odd as it may sound, this ordinarily gay, carefree girl, who is at the height of her career, has two qualities unusual it a career woman: She has an inferiority complex. And she has a natural, inborn dependence on the male sex which nature ally makes her devastating to men!

There is not the slightest doubt in me mind that Joan Fontaine will marry again in spite of being a two-time loser in the matrimonial sweepstakes. She is fundamentally a man’s woman—and that she won’t even attempt to change.