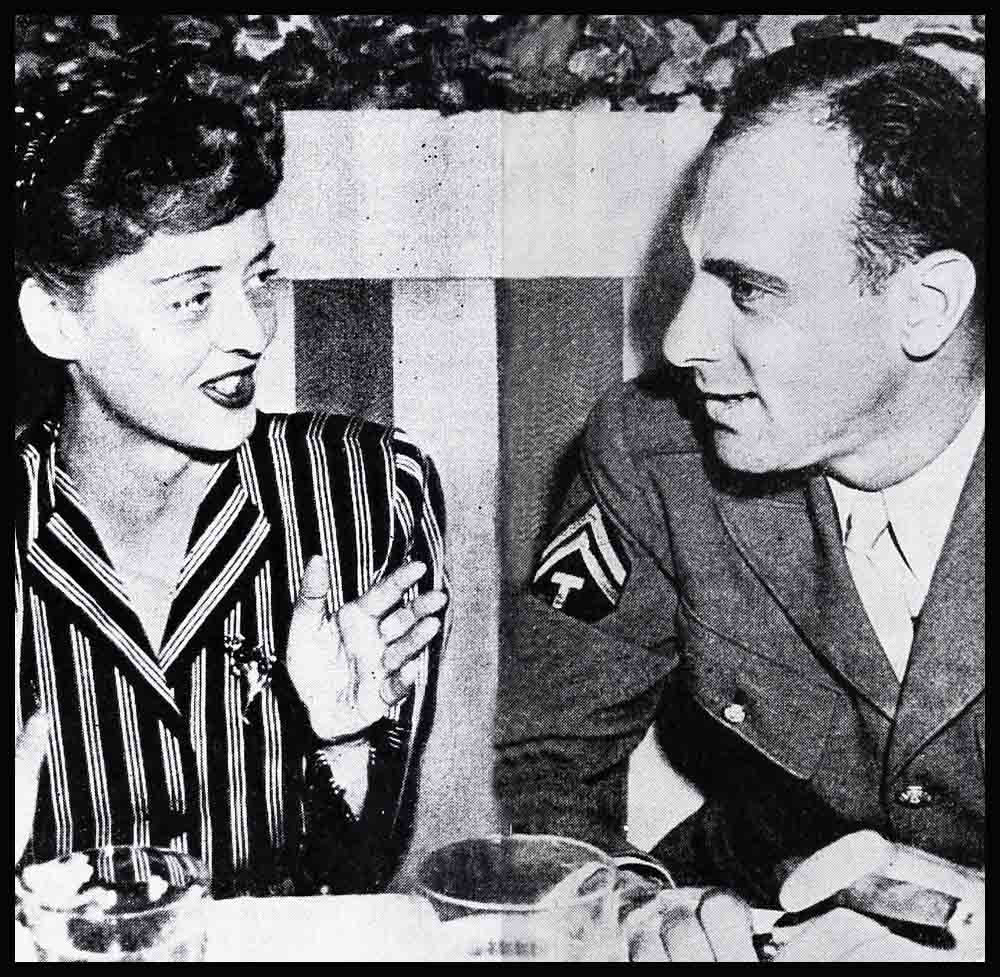 The Lady And The Corporal

UNDENIABLY, there is a man in the life of Bette Davis these days and Hollywood is pleased, though puzzled and more than a little bewildered. For the news came to Hollywood—and to the world—in a roundabout way that caught the nation’s press off-guard.

When, some months ago, Bette began gradually to drift back into the Hollywood scene following the death of her husband, everyone was too glad to see her take up a normal social life again to wonder about her escorts. The important thing was that Bette was out again, was beginning to lose the tenseness that had come from driving herself at her work until she was nervously exhausted.

When she came to a party here, a gathering there, nobody paid undue attention to the man whose arm she held. After all, as president of the Hollywood Canteen, she was often seen in the company of service men, and her position in the film world had given her many famous men whose company she always had enjoyed.

So Hollywood, the rumor Capital of the world, for once went calmly about its business when Bette began occasionally to dine at La Rue, lunch at Chasen’s, visit a friend—with a personable corporal who also seemed to appear frequently on the set when Bette was making “Mr. Skeffington.”

It remained for the South to prove its greater astuteness in matters romantic.

From the moment the report was made that an unidentified corporal from Ft. Benning had met Bette Davis at the Columbus, Georgia, railroad station on a Sunday night this fail and had taken her to the Still-well home on the outskirts of nearby Phenix City, Alabama—Hollywood was in an uproar.

Who and what could have seemed important enough for Bette to travel down to the Georgia-Alabama line on her short vacation lay-off when under almost any other circumstances she would have gone directly to her New Hampshire farm house which she cherishes and to which she speeds whenever her schedule allows her sufficient time to come to the East Coast?

SOON enough it was evident why. There was indeed a corporal. He was Corporal Lewis A. Riley, of the 168th Signal Photo Company, Second Army, stationed at Ft. Benning. He had indeed met Bette at the train and escorted her to Phenix City.

By now the press from all parts of the nation, as well as the excited citizens of the nearby town, began to bombard the Still-well home with queries and requests.

At this point Bette, who had kept herself from any questioning on the grounds that this was a holiday in rustic peace intended as a rest for her, emerged long enough from her quiet and privacy to deny the rumor that she had married, but also to admit that she had come south for a chance to see her good friend Corporal Riley.

“After all,” Bette said, ‘I’m thirty-six years old. It would be childish to beat around the bush about anything as serious as marriage plans.”

With that settled, Bette disconnected her telephone, padlocked the gates of her country hideaway and tried to recapture the delicious anonymity of being no movie star but just a tired working girl who was spending her hard-earned vacation “away from it all.”

Though Bette had no more to say, Hollywood now had enough to reconstruct the friendship of Bette and the Corporal and to draw its own conclusion. Friends now recalled Corporal Riley, remembered that he was a New Yorker, remembered Bette and Corporal Riley at a party of Elsa Maxwell’s. Some even thought it was here the two first met, though Bette herself had said that she had known him for years.

They remembered his dark attractiveness, his air of being well-to-do in spite of his G.I. corporal’s uniform, his pleasantness and quiet, amusing conversation.

While Hollywood was remembering, conjecturing and putting two and two together, the hunt was still on in the South for more evidence. Autograph seekers by the scores came to camp at Bette’s gate once the address of her vacation home was printed in the papers. Even the padlock and the owner’s four dogs roaming the premises failed to daunt their enthusiasm. One enterprising fan made friends with one of the dogs—a collie—and sent a note to Bette attached to its collar. Bette has a sense of humor, and such enterprise deserves recognition, so she sent the dog back to the gate bearing the coveted autograph.

OTIS TAFF, a Columbus grocer, bragged that Bette had ordered supplies from his store. By nightfall, everyone in town knew that Miss Davis had ordered “twenty-five dollars worth of groceries for one day! Fancy groceries, too!”

Bette’s sister, Mrs. R. C. Pelgram, tried valiantly to discourage the reporters and photographers who descended on the house—but Bette at last had to make an appearance and posed for photographs wearing a red and white plaid shirt and navy blue, knee-length shorts.

She looked like a little girl, healthily tanned and honestly startled at the blaze of curiosity her visit had occasioned—and the reporters went back to write columns of praise for the Academy Award winner who was just as simple and friendly and nice as any other American girl would be.

Corporal Riley, trying to wade through phone calls and interviews to go about his regular duties, was in for as much notoriety as Bette—but like Bette he emerged unscarred.

Scuttlebutt flew thick and fast around the Fort. G.I.’s who had worked with Riley in the 168th were plagued with questions about their newly famous buddy, and their testimony added up to make “Larry” an extremely nice guy—good enough for Bette, or any other movie star, in the Army’s opinion.

But is he married to Bette? This was always the final question. And here the amateur reporters were stumped.

Newspapermen, pressed by their city desks to find out for sure, ran into the same maybes. Corporal Riley’s commanding officer didn’t know, his) buddies didn’t know—and as for the Corporal himself, he just wasn’t around—except for working hours when he was not allowed to discuss personal business.

“Riley?” his barracks-mates would reply when pressed for word of the Corporal’s whereabouts. “Why he heads for town at the first sound of the quitting whistle every night.”

“And,” they would add enviously, “do you blame him?”

By this time demands from the boys that Bette visit camp were reaching a well-modulated roar. Corporal Riley was in a spot and Bette knew it. She isn’t the kind to leave people she likes in spots. Her promise to come to camp was gracious and prompt.

And did the boys love that visit! They cheered to the skies when Bette was introduced by their pal, Corporal Riley, and the sincere and friendly little speech she made won over even the most Doubting Thomas.

One soldier put all their feelings into words when he said, “I’ve been in the Army long enough to appreciate class when I see it. And that was class!”

What really sent the G.I.’s was that Bette was not too proud to live in Phenix City. Ordinarily scorned by the troops, Phenix City took on unaccustomed glamour when Bette and her household settled there for a month. “Bette Davis isn’t scared of Phenix City,” the word flew around the camp.

Bette took to life in Phenix City like a native. She carried wood from the backyard for the fireplace and the wood-burning cook-stove. She learned to make biscuits on the old iron stove without burning them, and mastered a wood-smoked steak.

She bought hip boots and overalls and joined her farmer neighbors in fishing expeditions and coon and ’possum hunts.

All of this surprised Phenix City but it was exactly what Bette’s friends would expect. After all she has never lived the silken life of a glamour girl. She has never chosen to be either idle or elegant. Her beloved “Butternut” in Vermont is charming but simple in the New England tradition. Her California home is a comparatively small house, which she did over with fresh paint and gay chintzes, in a comparatively unfashionable section of town.

Bette frequently bathes her own dogs, shampoos her own hair and works as chief cook and bottle washer at the Hollywood Canteen. There’s no question about it that she would take to Georgia’s good American pattern instantly and instinctively. And no doubt, by the same token, that Georgia would take to her the very same way.

She saw Corporal Riley when she could—but a Technician, Fifth Grade, on active duty, isn’t wallowing in leisure time.

Once the clamor and the shouting died down, she relaxed and had the time of her life.

There was a brief interim in her holiday during which she responded to a request to come to Washington where she saw the President.

But the call of Georgia was strong. No sooner had she finished her official business than she hurried back to the Ft. Benning area for the precious remaining days of her vacation, this time to occupy the Williams estate some eighteen miles distant.

Once more the marriage rumors filled the air like a Georgia snowstorm and once more Bette had to make her statement to the press. “No, I’m not trying to be coy,” she said. “I’m simply not going to marry him.”

This had to satisfy the South. But it was no great help when reports spread to New York that at this psychological moment Corporal Riley was due to spend a brief furlough with his parents who live on Park Avenue in Manhattan.

Coupled with this report was the stimulating information that Bette was expected to arrive in New York at about the same time. Could it be that the Corporal was presenting his lady to the Riley family?

Bette is back in Hollywood now, hard at work on “Stolen Life,” her first picture in the exciting capacity of co-producer, and the furor which attended her visit to Phenix City and New York has subsided for the moment.

It wasn’t a honeymoon—if Bette says it wasn’t. And we take her word for it if Bette says she isn’t going to marry Lewis Riley—at least not now.

And the next time Corporal Riley shows up in Hollywood—and everyone is sure he will—curious eyes and ears will be turned in his direction.