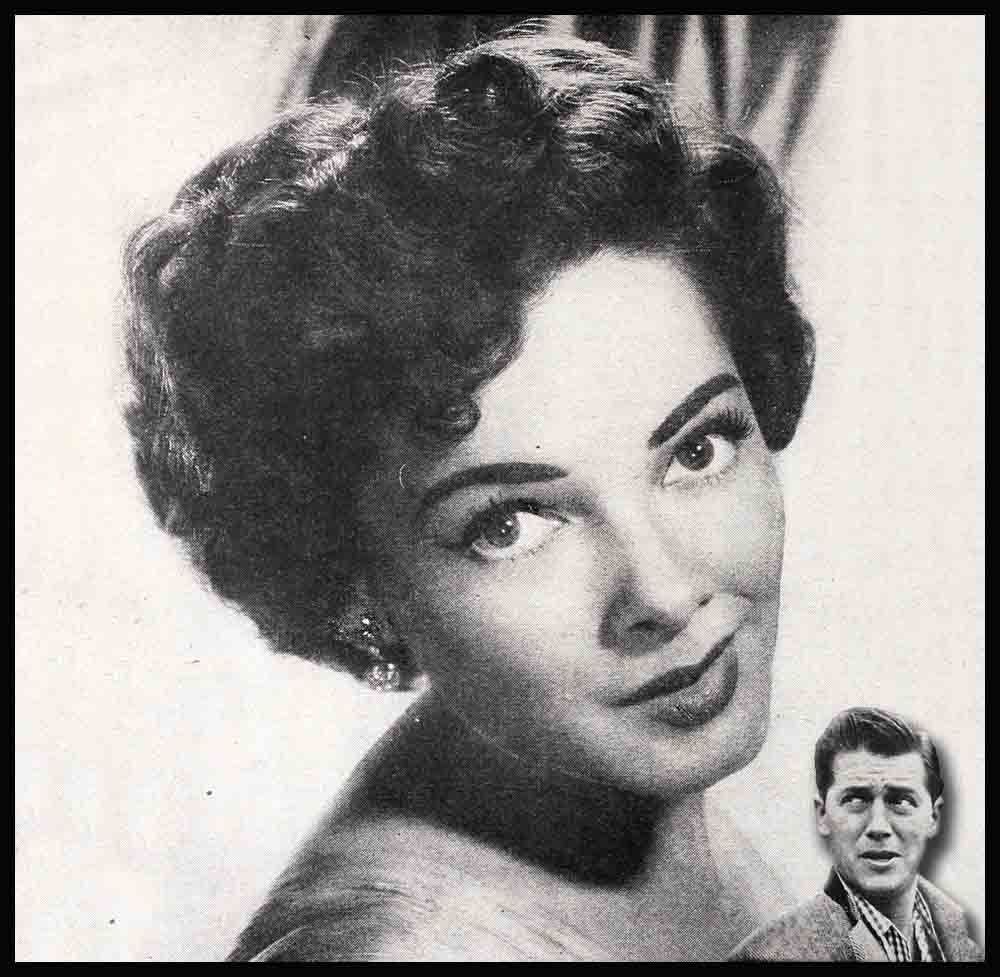 I had been working on “The Desert , Song” exactly three days, and I had done nothing more than pre-record some of the song numbers, when I picked up a Hollywood paper one morning and read that I Kathryn Grayson and I were “feuding on the set.”

I blew my stack.

The simple truth of the matter was that, up until that very instant, I hadn’t exchanged more than forty words with Kathryn and those words had been both formal and pleasant.

I don’t know who starts these crazy rumors. My wife, Sheila, and I had met I Kathryn at a party. As is usual at gatherings where most of the guests earn their living in the entertainment field, everyone began to contribute something to the evening’s fun.

When Kathryn was asked to sing, she arose without any of the usual “Oh, really not tonight” routine, and took her place within the curve of the grand piano. She sang “One Fine Day” from “Madame Butterfly” and she sang the “Habanera” from “Carmen.” She brought down the house.

I had seen her in pictures and I had assumed that hers was a light, fragile voice of sweetness, flexibility, and true pitch. I discovered that her voice is a powerful instrument, equal in every respect to many of the celebrated grand opera voices. I was impressed.

When Warner Brothers notified me that I was to make “The Desert Song,” I asked if Kathryn Grayson could be borrowed from M-G-M. I went so far as to say that I didn’t see how the picture could be made at all unless a girl having both Kathryn’s beauty and great voice could be cast as the heroine. Does that sound like stage setting for a feud?

The day I’d learned that Kathryn had been loaned to the studio, I had telephoned Sheila and yelled in triumph, “How about that for good news?”

So after I had read our sour publicity, I rushed to the recording studio and told Kathryn, “I want you to know that I had nothing to do with that silly story.”

She lifted her shoulders in a relieved sigh and then began to smile. “And I want you to know that I had nothing to do with it either. I’m glad to get that straightened out. Now let’s forget it.”

How’s that for sportsmanship?

During the ensuing eleven weeks of “The Desert Song” shooting, I learned many other facts about Kathryn. For instance. she is one of the most efficient girls in Hollywood. She never wastes a minute. I interrupted her in the midst of making a list one afternoon and discovered that she was planning menus for her household for the following week. Not only that, she was making out a grocery list at the same time.

She keeps track of such things as having the house painted (after securing bids and placing the contract with the most satisfactory bidder), having the trees on her grounds pruned and otherwise cared for, maintaining records of dental visits for the members of the family, buying birthday gifts for something like twenty-two relatives, and in general serving as major do-mo of a home while simultaneously turning in fine performances as actress-singer.

Keeping track of a career and maintaining a full personal life at the same time would be occupation enough for anyone, but Kathryn still finds time to do things for other people. Without fuss, without letting anyone on the set become aware that she was making a series of telephone calls, Kathryn managed to spring a surprise party on the cast and crew during the late afternoon of her last day on the picture. You’ve never seen such a feast!

In the midst of all the excitement, Kathryn disappeared. She had waited until the party was well launched, then slipped away, leaving her guests to enjoy themselves while she went home to have dinner with her little girl. Kathryn is a devoted mother. You can read her love in her facial and tonal expressions when she talks about Patty Kate. You can sense it when she discusses the weekend plans she has made for the youngster’s pleasure.

A friend of Kathryn’s told me that when Kathryn and Johnny Johnston were playing The Palladium in London, Kathryn broke out in a rash and concluded that she had picked up some bug. Johnny called a series of doctors, none of whom seemed to be able to effect a cure. Finally someone suggested an elderly physician who had been successful in treating skin disorders.

So he was called. He studied the rash, then settled himself in a chair opposite the patient and encouraged her to talk. After several minutes he began to smile. In a Killarney brogue he told her, “You are pining for that baby of yours. You are worried because she is wearing a cast on that dislocated hip, and you yearn to be at home with her. Your rash is caused bv your emotional state. Stop fretting and you’ll be all right.”

I’d like to point out, too, that Kathryn also has a pixie sense of humor. The best way I can explain it is to tell a story. Both of us were invited to the same benefit, and both of us agreed to sing. Although show people are always happy to be of assistance, sometimes these benefits drag on and on.

In the wings, Kathryn and I were kidding about the fact that it was almost midnight and neither of us had been called upon. I was groaning because I had an early morning call and I was telling her how lucky she was to have the day off.

“Day off!” she hissed. “I want you to know that I plan to do two weeks’ work tomorrow.” Whispering furiously she began to enumerate her crowded program, step by step.

“Yeah, yeah. That’s what you’re saying now,” I whispered back. “But tomorrow morning you’ll turn off that old alarm, roll over and pound the pillow until noon. I know how it goes with you glamour gals.”

She gave me a funny little look that said, “Bub, you’ve gone too far. Now comes the business,” and hurried away to the program director.

Opening those great brown eyes and tipping up that persuasive nose, Miss Grayson pleaded that she had to report for work at six the next morning, and couldn’t she please do her bit now?

Who could resist? Miss Grayson sang and then went sailing past me, her pretty pan elevated in impish triumph. I didn’t sing until 1:00 a.m. The next time we both appear at the same benefit, I’m going to appoint her my program agent.

Everybody has a fault or two. And in order to keep this report on Kathryn from seeming saltless. I might as well mention her outstanding weakness.

She is a perfectionist. She worries. She wants to be a better singer day by day. Furthermore. she considers herself an actress in need of improvement. She studies. She rehearses. She says, “I think I could improve it by repeating once more.”

I think I should write a note to her. Matter of fact, I will. And here it is: “Kid, you’re great. You’ve got everything: beauty, brains, character, and a God-given voice. You can afford to relax and enjoy life. And you can afford to ignore any talk of feudin’ and fightin’ with your leading men. I know—I was your leading man.”